Core tip: Intraductal papillary mucinous neoplasm (IPMN) is a precursor lesion of pancreatic cancer. Although pancreatic cancer is one of the malignancies associated with hereditary non-polyposis colorectal cancer (HNPCC), only one case has been reported IPMN in a HNPCC patient. We report a first case of IPMN arising in heterotopic pancreas in a patient of HNPCC.

Hereditary non-polyposis colorectal cancer (HNPCC) is a most common form of hereditary colorectal cancer syndrome that accounts for approximately 3% of all colorectal cancers[1]. It is an autosomal dominant syndrome caused by germline mutations of mismatch repair genes including MLH1, MSH2, MSH6, and PMS2. It shows characteristic microsatellite instability (MSI).

HNPCC associated cancers include cancer of colon, rectum, stomach, ovary, ureter, renal pelvis, brain, small bowel, hepatobiliary tract, and skin[2]. Clinically these tumors are diagnosed at an early age, are multiple, and have a family history. Colonic cancers are usually located in the proximal colon.

Heterotopic pancreas is defined as pancreatic tissue located outside of the normal anatomic border of the pancreatic gland[3]. About 90% of heterotopic pancreas is localized in the stomach, duodenum, or upper part of jejunum, but ileal location is rare at approximately 1%[4]. It is usually asymptomatic, however it can produce size or location dependent symptoms and can show most pathologic changes of pancreas including benign or malignant tumors. Intraductal papillary mucinous neoplasm (IPMN) is one of the tumors arising in pancreas. It is characterized by cystic dilatation of pancreatic duct with intraductal papillary growth structures that are covered with mucin producing columnar cells. In this report, we describe a case of intraductal papillary mucinous neoplasm of the ileal heterotopic pancreas in a patient with hereditary non-polyposis colorectal cancer which, to our knowledge, is the first report in English literature.

We present the case of a 49-year-old woman with IPMN of heterotopic pancreas of the HNPCC family. The patient had a past history of total colectomy, transabdominal hysterectomy, and bilateral salpingo-oophorectomy due to colonic adenocarcinoma on anal verge 75 cm, and endometrial adenocarcinoma 11 years ago. Lobectomy of thyroid due to thyroid cancer was also performed 3 years ago. Family history included death of her father due to colonic carcinoma and death of her mother due to right colonic carcinoma. Her sister had also suffered fatal right colonic carcinoma and endometrial carcinoma. Another sister died and the patient was unable to recall the cause of death.

The patient had no specific symptom and the clinician could not find any specific sign on physical examination. However clinician found a submucosal mass on the terminal ileum on follow up computed tomography (CT). It had increased in size from 1.7 cm to 2.2 cm and was suspected of necrotic change on abdominopelvic CT compared with 2 years ago CT (Figure 1). Surgical resection was performed under the presumption of gastrointestinal stromal tumor.

The cut surface of specimen showed an ill circumscribed grayish yellow, fibrotic and focal cystic mass in the submucosal layer (Figure 2). Microscopically, the mass was composed of pancreatic ducts and acini. The pancreatic ducts were cystically dilated. They showed intraductal papillary proliferative lesion with abundant mucin and some of the cells had marked nuclear atypia. We diagnosed an IPMN with high grade dysplasia arising in heterotopic pancreas of the terminal ileum (Figure 3). Immunohistochemically, the tumor cells were positive for MUC2, MUC5AC and negative for MUC1, MUC6, CDX2, indicative of intestinal type IPMN. Interestingly the tumor cells were positive for MLH1, PMS2 and negative for MSH2, MSH6 indicating defects in DNA mismatch repair (Figure 4). 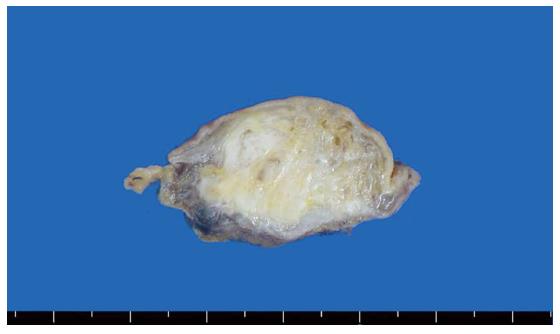 Figure 2 Cut surface shows a fibrotic and cystic lesion in the submucosa. 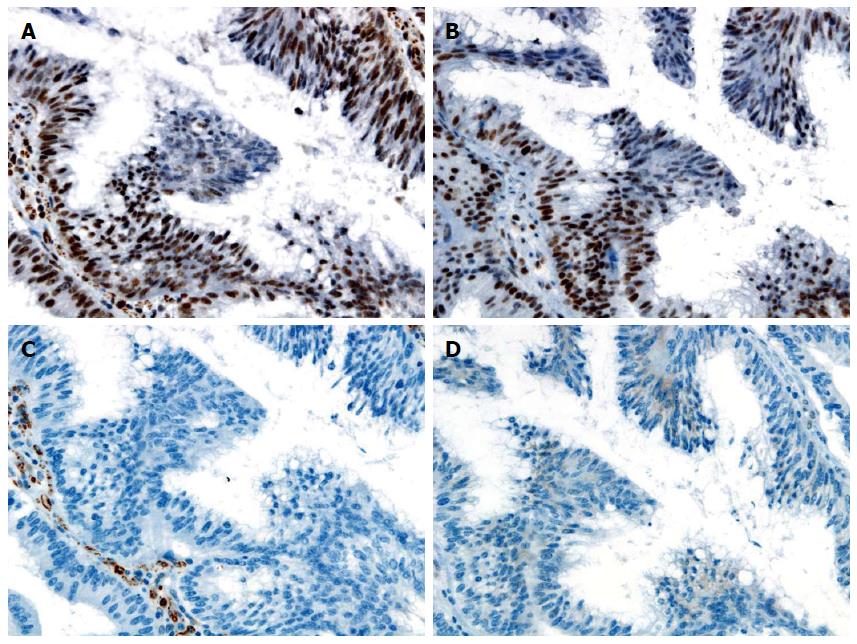 We reported the first case of IPMN arising in heterotopic pancreas of a HNPCC patient. We could not confirm the germline mutation of mismatch repair genes and MSI status. However, clinically she was a HNPCC patient according to Amsterdam criteria II[2]. Also, immunohistochemical staining for MSH2 and MSH6 were negative. Loss of expression of the MLH1 or MSH2 genes is associated approximately 100% with an MSI-high phenotype[5]. The Revised Bethesda Guidelines recommend molecular evaluation in patients with loss of expression of one of the MMR genes[5]. Based on clinical and family history with immunohistochemical study, we diagnosed the patient with HNPCC.

IPMN is one of the premalignant lesions of the pancreas arising in elderly. Only one report of IPMN in a patient with HNPCC has been previously reported[6]. Briefly, the patient was a 61-year-old woman with multiple cancer history including unknown pathologic type brain tumor, endometrioid ovarian cancer, endometrial cancer, infiltrating duct carcinoma of breast, malignant melanoma, multiple basal cell carcinomas, squamous cell carcinoma of skin, and adenocarcinoma contained within an adenoma at the splenic flexure, intramucosal adenocarcinoma of colon, and invasive adenocarcinoma of rectum. She had a germline mutation of the MSH2 gene, however, family history was unavailable[6].

In previous study, immunohistochemical staining for MLH1 and MSH2 showed 100% positivity in IPMN, suggestive that MMR genes do not play a significant role in development of IPMN[7]. Sparr et al[6] suggested that IPMN may be part of extracolonic tumors in HNPCC because their study case showed loss of MSH2 expression, high level MSI, MSH2 gene mutation and in general, IPMN is associated with extrapancreatic neoplasms, specifically colorectal adenomas and adenocarcinomas, as well as gastric carcinomas. Our case showed loss of expression of MSH2 and MSH6 protein by immunohistochemical staining. This finding suggested that MMR genes play a role in development of IPMN, especially in patients with HNPCC, in agreement with Sparr et al[6].

On the other hand, IPMN can very rarely originate from heterotopic pancreas. To the best our knowledge, only 9 cases of IPMN or adenocarcinoma with IPMN arising in heterotopic pancreas were reported in English literature[3,8-15]. The mean age of these cases was 65.4 years (range: 44-80 years). They were located in stomach (4 cases), jejunum (2 cases), esophagus (1 case), duodenum (1 case), and Meckel’s diverticulum (1 case). Most cases were located in common sites of heterotopic pancreas such as stomach, duodenum, and jejunum[4]. Clinically our case of IPMN occurred at a relatively young age that is characteristic of tumors arising in HNPCC patient.

In conclusion, we reported the second case of IPMN in a patient with HNPCC and the first case of IPMN arising in heterotopic pancreas in a patient with HNPCC. Pancreatic cancer is one of the extracolorectal tumors associated with HNPCC. IPMN is a precursor lesion of pancreatic cancer but the relationship between IPMN and HNPCC is unknown. It is important to identify HNPCC for follow up and screening tests for the family. Further studies are needed to identify the relationship between IPMN and HNPCC.

On physical examination there was no palpable mass.

Follow up CT showed a submucosal tumor with increased in size from 1.7 cm to 2.2 cm during the past 2 years and newly appeared foci of suspicious for necrosis.

This is a first report of intraductal papillary mucinous neoplasm (IPMN) arising in heterotopic pancreas with a patient with hereditary non-polyposis colorectal cancer (HNPCC).

This case report presents a first case of IPMN arising in heterotopic pancreas with a patient with HNPCC. We add a new case supporting the inclusion of IPMN in the list of extracolonic HNPCC associated tumors.

This is a case report of an interesting case of IPMN originating from the ileal heterotopic pancreas in a patient with HNPCC. The manuscript is well written and structured in its composition. It contains four figures which appear to be complete and easily accessible.