Gastric adenocarcinoma is one of the most common malignancies worldwide. Histochemical and immunohistologic analyses classify the phenotypes of gastric adenocarcinoma into several groups based on the variable clinical and pathologic features. A new and rare variant of gastric adenocarcinoma with chief cell differentiation (GA-CCD) has recently been recognized. Studies reporting the distinct clinicopathologic characteristics proposed the term oxyntic gland polyp/adenoma because of the benign nature of the GA-CCD. Typically, GA-CCD is a solitary mucosal lesion that develops either in the gastric cardia or fundus. Histologically, this lesion is characterized by tightly clustered glands and anastomosing cords of chief cells. Immunohistochemically, GA-CCD is diffusely positive for mucin (MUC) 6 and negative for MUC2 and MUC5AC. However, other gastric tumors such as a gastric neuroendocrine tumor or fundic gland polyp have been difficult to exclude. Because GA-CCD tends to be endoscopically misdiagnosed as a neuroendocrine tumor or fundic gland polyp, comprehensive assessment and observation by an endoscopist are strongly recommended. Herein, we report a rare case of oxyntic gland adenoma endoscopically mimicking a gastric neuroendocrine tumor that was successfully removed by endoscopic mucosal resection.

Core tip: Gastric adenocarcinoma with chief cell differentiation is a new and rare variant of gastric adenocarcinoma. Due to difficulty in ruling out other gastric tumors, such as gastric neuroendocrine tumor, fundic gland polyp, or gastric adenoma, comprehensive examination and observation by an endoscopist are strongly recommended. We report a rare case of oxyntic gland adenoma endoscopically mimicking a gastric neuroendocrine tumor that was successfully removed by endoscopic mucosal resection.

First reported in 2007, fundic gland type with chief cell differentiation represents a novel, rare variant of gastric adenocarcinoma[1]. Singhi et al[2] recently reported ten cases of gastric adenocarcinoma with chief cell differentiation (GA-CCD) in patients from multiple ethnic backgrounds. The term oxyntic gland polyp/adenoma was proposed instead of GA-CCD, as GA-CCD is regarded as benign based on the natural course of the disease described in the previous studies. GA-CCD is very rare, with unknown clinicopathologic features and natural course[1-3]. We herein report a rare case of oxyntic gland adenoma endoscopically mimicking a gastric neuroendocrine tumor that was successfully removed by endoscopic mucosal resection (EMR). 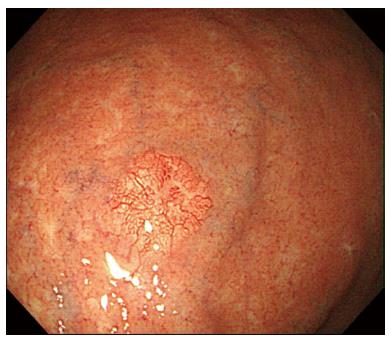 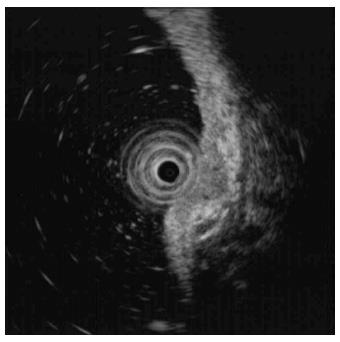 EMR was performed under conscious sedation for the duration of the treatment in order to establish the definitive diagnosis of the lesion. The inject-lift-and-cut technique was employed through two separate channels of a double-channel endoscope; the grasping forceps were used to lift the lesion, and an electrocautery snare was used to remove the lesion (Figure 3). No complications, such as bleeding or perforation, were observed after the procedure. The patient started eating two days after EMR, and was discharged on the third hospital day.

Sections from the stomach showed proliferation of glands with complex architecture confined to the mucosa and no submucosal invasion (Figure 4A). A high-power view of the lesion showed a complex growth of glands lined with one to two cell layers of oxyntic epithelium containing abundant chief cells (Figure 4B). The lining cells showed moderate nuclear pleomorphism with no identifiable mitotic figures. Immunohistochemical analysis showed most of the glandular cells were positive for mucin (MUC) 6 (Figure 5) and negative for MUC2, MUC5AC and α-fetoprotein. Ki-67 index was < 1% (Figure 5E). Consequently, the patient was diagnosed with oxyntic gland adenoma with high-grade dysplasia that correlated with immunohistochemical staining. A follow-up EGD, performed two months after the EMR, showed a whitish scar with no recurrence.

Figure 4 Pathologic examinations. A: Hematoxylin and eosin staining showed proliferation of glands with complex architecture, situated deep in the mucosal layer with surface involvement (× 40); B: A higher magnification showed complex growth of glands lined with one to two layers of oxyntic epithelium with abundant chief cells. The lining cells showed moderate nuclear pleomorphism, but no mitotic figures were identified (× 200). 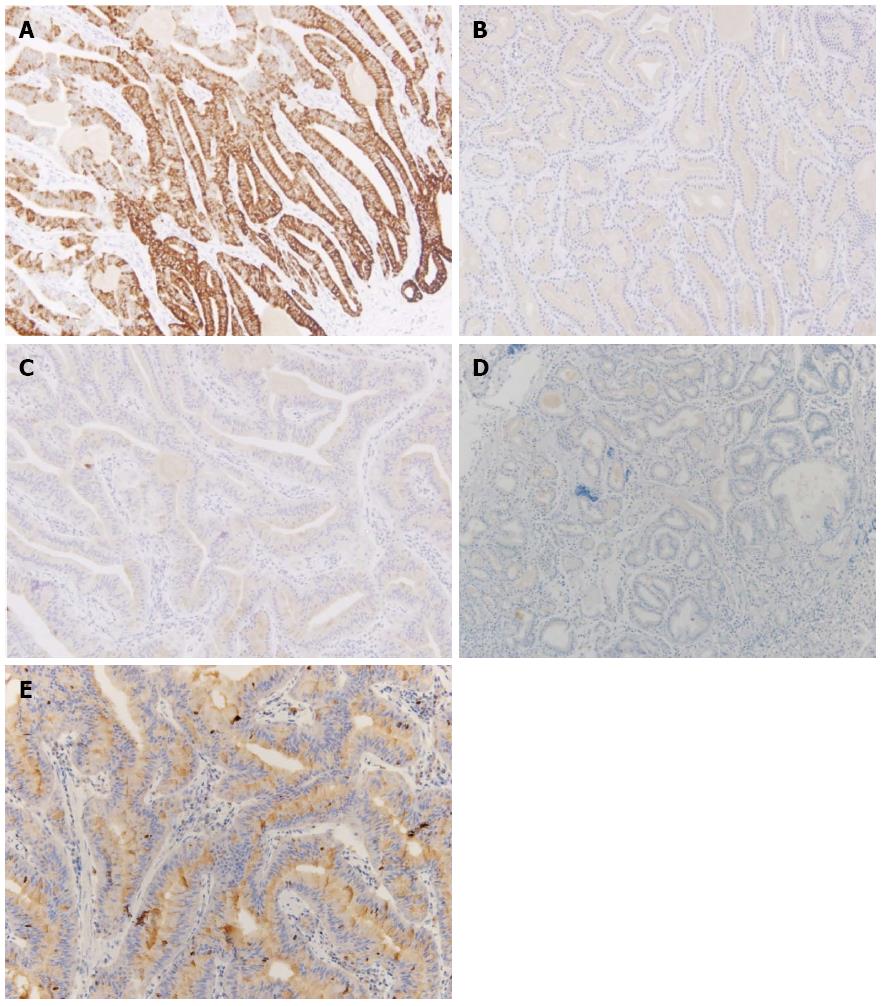 Gastric adenocarcinoma is defined as a malignant epithelial tumor, originating from glandular epithelium of the gastric mucosa[2]. Using previous histochemical and immunohistologic analyses for MUC, the phenotype of gastric adenocarcinoma can be classified into various subtypes[1]. The gastric phenotypes include the foveolar, pyloric gland, and fundic gland types[4]. Currently, little information is available concerning gastric adenocarcinoma featuring fundic gland cell types[1]. GA-CCD is a recently reported rare variant of gastric adenocarcinoma[2]. After the initial report on GA-CCD[1], the subsequent follow-up study of ten GA-CCD cases expanded on the clinicopathologic features of this disease[3]. Park et al[4] reported three cases of GA-CCD among Koreans (Table 1). Interestingly, Singhi et al[2] noted that the use of the term GA-CCD seemed to overemphasize the biologic potential of these lesions, which have not been reported to metastasize and display a lower proliferative index compared to fundic gland polyps. Considering the benign feature of GA-CCD, these authors proposed the term oxyntic gland polyp/adenoma to be used until further studies could clarify the pathogenesis of these lesions and their natural history[2]. In our case, a lesion endoscopically mimicking a gastric neuroendocrine tumor was diagnosed as oxyntic gland adenoma. Initial biopsy findings were chronic gastritis with intestinal metaplasia. However, EMR allowed for a definitive diagnosis and treatment of an oxyntic gland adenoma with high grade-dysplasia. The previously reported cases of oxyntic gland adenoma have had favorable prognoses[1-4]. Similarly, the present case was expected to have a good prognosis despite the presence of high-grade dysplasia. However, a more prolonged follow-up investigation of the patient is needed. Some studies have reported the presence of histologic variants of gastric adenocarcinoma featuring specific cell types based on MUC immunohistochemistry or electron microscopy, including choriocarcinoma, hepatoid carcinoma, carcinoma with lymphoid stroma, Paneth cell carcinoma, small cell carcinoma, and parietal cell carcinoma[5]. Depending on the variant, the prognosis was either better or worse than the typical gastric adenocarcinoma[5].

Histologically, GA-CCD is a well-differentiated adenocarcinoma composed primarily of cells resembling chief cells[1-4]. GA-CCD is typically centered in the deep mucosa and consists of clustered glands and irregular anastomosing cords of predominantly chief cells[1]. In our present case, no lymphovascular or submucosal invasion, geographic necrosis or mitotic figures were identified, which helped exclude malignancy despite the striking architectural disturbance. MUCs are high-molecular-weight glycoproteins synthesized by secretory epithelial cells as membrane-bound or secreted products[6]. Pinto-de-Sousa et al[7] showed the MUC phenotype associated with the tumor site. Normal gastric mucosa express MUC1, MUC4, MUC5AC, and MUC6[6]. According to the previous reports, GA-CCD is diffusely positive for MUC6, but negative for MUC2 and MUC5AC[1-4,8]. In our present case, immunohistochemical analysis revealed the lesion positive for MUC6 and negative for MUC2, MUC5AC, and α-fetoprotein with a low Ki-67 proliferative index, excluding a neuroendocrine tumor and confirming the diagnosis.

In several studies, GA-CCD was located in the upper third of the stomach and arose from a deeper area of the gastric mucosa[1-3]. For this reason, endoscopic findings of GA-CCD may resemble those of fundic gland polyp or gastric neuroendocrine tumor[4]. Recently, Ueyama et al[9] analyzed the endoscopic findings of ten GA-CCD cases including the shape, color, vessels and background mucosa using the Sydney system to elucidate the endoscopic characteristics[10]. In terms of gross appearance, all of the lesions were classified into two subtypes: the submucosal tumor-shape type (60%) and a flat and depressed type (40%)[9]. Therefore, it was suggested that the submucosal tumor-shape type is needed to rule out other submucosal tumors. Consequently, the authors proposed that the discriminating characteristics for gastric neuroendocrine tumor were related to color tone, vessels, and hardness. Gastric neuroendocrine tumors have a yellow tone, few vessels on the surface, and a hard appearance, whereas GA-CCD are faded or whitish, have a soft appearance, and have more branched vessels on the surface[9]. Endoscopically, the four most frequent features of GA-CCD were submucosal tumor shape, whitish color, dilated vessels with branch architecture, and background mucosa without atrophic change[9]. In our present case, endoscopic findings showed that the lesion was hard, movable, and a submucosal tumor shape, with irregular and dilated vessels on the surface, consistent with two of the four most frequent features of GA-CCD. Further research is necessary to better our understanding of the endoscopic characteristics of GA-CCD.

In conclusion, the lesion was diagnosed as GA-CCD based on the fact that the lesion endoscopically mimicked a gastric neuroendocrine tumor with shared characteristics of chief cells, was positive for unique histopathologic features, and expressed MUC6. Because GA-CCD tends to be endoscopically misdiagnosed as a neuroendocrine tumor or fundic gland polyp, a tailored examination and observation by an endoscopist are strongly recommended.

A 73-year-old man with a history of type 2 diabetes mellitus, dyslipidemia and benign prostate hypertrophy was admitted for evaluation of a suspected gastric neuroendocrine tumor following esophagogastroduodenoscopy screening of a gastric lesion.

On physical examination, the patient exhibited no specific symptoms or abnormalities.

The patient was treated with endoscopic mucosal resection without complications.

There was a clear margin of endoscopically resected lesion with no lymphovascular invasion.

Because gastric adenocarcinoma with chief cell differentiation tends to be endoscopically misdiagnosed as a neuroendocrine tumor or fundic gland polyp, a comprehensive examination and observation by an endoscopist are strongly recommended.

This case report is of great interest as the authors describe a rare case of oxyntic gland adenoma endoscopically mimicking gastric neuroendocrine tumor that was successfully removed by endoscopic mucosal resection.