Helicobacter pylori (H. pylori) infection is the single most important factor causing chronic atrophic gastritis, peptic ulcer disease, gastric cancer, and gastric mucosa-associated lymphoid tissue lymphoma[1]. The eradication of H. pylori infection effectively reduces the incidence of peptic ulcer and gastric cancer and prevents their recurrence[2]. The most important first-line treatment for eradication of H. pylori is currently the standard triple therapy comprising a proton pump inhibitor (PPI), clarithromycin, and either amoxicillin or metronidazole[3,4]. Although many studies have indicated that this therapy is highly effective, the reported eradication rates vary between 70% and 95%[5,6] and have shown a tendency to decrease due to increasing antibiotic resistance[7,8]. Therefore, more effective alternative regimens are needed.

Many alternative, first-line treatment regimens have been studied. Sequential therapy is one alternative regimen, which consists of a PPI and amoxicillin for the first seven days, followed by a PPI plus metronidazole and clarithromycin for another seven days[9]. This regimen is currently recommended as an alternative first-line treatment for H. pylori infection in European guidelines[3]. In Korea, a region with relatively high antibiotic resistance, the efficacy of sequential therapy has been reported in several randomized controlled trials, including our previous prospective study[10-12]. These studies initially indicated sequential therapy to be effective, but recent studies have shown less satisfactory results. The main causes of sequential therapy failure are patient non-compliance and antibiotic resistance[13]. Non-compliance is due mainly to patients’ complicated schedules[14]. Another key element of treatment failure is bacterial resistance to clarithromycin. Resistance to clarithromycin is relatively high in Korea[15,16] and plays an role in diminishing the effect of sequential therapy[13].

This study was conducted at Seoul National University Bundang Hospital between December 2013 and August 2014. A total of 161 patients with H. pylori infection were enrolled in this prospective, open-labeled, randomized pilot study. H. pylori infection was defined on the basis of at least one of the following three tests: (1) a positive 13C-urea breath test (13C-UBT); (2) histologic evidence of H. pylori by modified Giemsa staining in the lesser and greater curvature of the body and antrum of the stomach; or (3) a positive rapid urease test (CLOtest; Delta West, Bentley, Australia) by gastric mucosal biopsy from the lesser curvature of the body and antrum of the stomach. Patients were excluded if they had received PPIs, H2 receptor antagonists, or antibiotics in the previous four weeks, or if they had used non-steroidal antiinflammatory drugs or steroids in the two weeks prior to the 13C-UBT. The other exclusion criteria were age below 18 years, previous gastric surgery, or endoscopic mucosal dissection for gastric cancer, advanced gastric cancer, severe current disease (hepatic, renal, respiratory, or cardiovascular), pregnancy, and any condition thought to be associated with poor compliance (e.g., alcoholism or drug addiction).

Patient compliance was evaluated by remnant pill counting and direct questions from a physician 1 wk after completion of the treatment. Compliance was defined as good when less than 15% of the pills were unconsumed at remnant pill counting. At the same time, all of the patients were asked about adverse events. Successful eradication therapy for H. pylori infection was defined as a negative 13C-UBT test four weeks after the cessation of eradication treatment. The study protocol was approved by the Ethics Committee at Seoul National University Bundang Hospital (IRB number: B-1409/268-103).

Before the 13C-UBT, the patients were instructed to stop taking medications (i.e., antibiotics for 4 wk, or PPIs for 2 wk) that could affect the result, and fasted for a minimum of 4 h. After patients cleaned their oral cavities by gargling, a pre-dose breath sample was obtained. Then, 100 mg of 13C-urea powder (UBiTkitTM; Otsuka Pharmaceutical Co. Ltd., Tokyo, Japan) was dissolved in 100 mL of water and was administered orally, and an additional breath sample was obtained. Breath samples were taken with special breath collection bags while patients were in the sitting position, both before drug administration (baseline) and 20 min after the powder medication. The samples were analyzed using an isotope-selective, non-dispersive infrared spectrometer (UBiT-IR 300®; Otsuka Pharmaceutical Co. Ltd, Tokyo, Japan).

The primary and secondary outcomes of the present study were H. pylori eradication rates and treatment-related adverse events, respectively. The eradication rates were determined by intention-to-treat (ITT) and per-protocol (PP) analyses. ITT analysis compared the treatment groups, including all patients as originally allocated; the PP analysis compared the treatment groups, including only those patients who had completed the treatment as originally allocated. Mean standard deviations were calculated for quantitative variables. Student’s t test was used to evaluate the continuous variables, and χ2 test and Fisher’s exact test were utilized to assess the non-continuous variables. Additionally, univariate and multivariate analyses were conducted to assess the effects of factors on the eradication rate. All statistical analyses were performed using the Predictive Analytics Software 20.0 version for Windows (SPSS Inc., IBM, Chicago, IL, United States). A P value of less than 0.05 was defined as clinically significant.

A schematic diagram of the study is provided in Figure 1. A total of 161 patients with H. pylori infection were randomly allocated to the MOX-ST group or the CLA-ST group by 1:1. Of the 161 patients, 155 (96.2%) completed their allocated regimens. The remaining six patients (3.8%) were excluded from study analysis. Therefore, 78 MOX-ST patients and 77 CLA-ST patients were included in the PP analysis. The enrolled patients’ baseline demographic and clinical characteristics did not statistically differ between the two groups (Table 1). 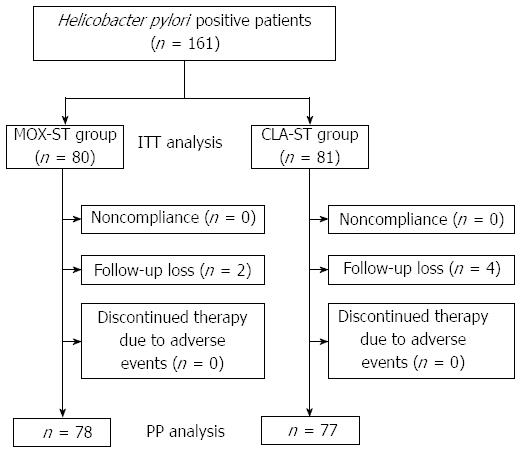 Table 4 lists the adverse events that occurred in the two groups. Adverse events occurred for 10 of 78 patients (12.8%) in the MOX-ST group and for 19 of 77 patients (24.6%) in the CLA-ST group. The difference was statistically significant (P = 0.038). The most common adverse events were bloating/dyspepsia (4/78, 5.1%) and taste distortion (3/78, 3.8%) in the MOX-ST group and epigastric discomfort (5/77, 6.4%) and taste distortion (5/77, 6.4%) in the CLA-ST group. These differences were not statistically significant (P > 0.05). Most of the adverse events were mild-to-moderate in intensity; there was none serious enough to cause discontinuation of treatment in either group. The treatment compliance (as defined as taking at least 85% of scheduled medication doses) was 100% in both groups (Table 4).

A recent meta-analysis evaluating H. pylori strains in Western populations found fluoroquinolone-resistance prevalence in less than 5.0%[15]. Fluoroquinolone resistance in Japan is 15%[23]. In Gyeonggi Province, Korea, the rates of resistance were 5.0% for levofloxacin and moxifloxacin, 5.0% for amoxicillin, 16.7% for clarithromycin, 34.3% for metronidazole, and 8.0% for tetracycline[8]. These results might be related to different patterns of regional and institutional fluoroquinolone use[24]. This explains why a moxifloxacin-based triple regimen achieved successful eradication in 84%-87% of cases (by PP analysis), as compared with the markedly lower rates recorded for levofloxacin-based triple regimens elsewhere in Asia[25-28]. These results suggest that appropriate H. pylori-eradication therapies should be continually adjusted according to local bacterial resistance patterns. Therefore, we could explain that the reason moxifloxacin-based sequential therapy is more effective than clarithromycin-based sequential therapy in Korea is the low resistance to moxifloxacin compared with clarithromycin.

Our study showed that advanced age (≥ 60 years) was a significant independent factor related to the eradication failure in the CLA-ST group, whereas there was no significance in the MOX-ST group in multivariate analysis. Other studies have also reported that advanced age was associated with treatment failure in H. pylori eradication therapy[29,30]. However, the mechanisms by which advanced age interfere with eradication remain unclear. Immunity degradation, which is one of the physiological changes of the human body by aging, may be associated with poor treatment response[31]. Further studies are needed to investigate the mechanisms underlying the association between advanced age and poor response to eradication treatment.

The most common adverse events of moxifloxacin are gastrointestinal disturbances, such as diarrhea and nausea. In the present study, the most common adverse events were taste distortion, epigastric discomfort, and abdominal bloating. The total adverse-event rate for the 14-d moxifloxacin-based sequential treatment was 12.8% (10/78), which was significantly lower than that for the 14-d clarithromycin-based sequential treatment (24.6%, 19/77). In both groups, the adverse events were mild to moderate; none was serious enough to require discontinuation or interfered with regular life.

This study has several limitations. First, this study was a single-center pilot study with a relatively small sample size. Larger prospective studies will be needed to confirm our results in regions where different patterns of resistant are present. However, we think our exploratory study would be a good reference for clinicians and researchers to help design new studies on this subject. Second, we could not investigate the antibiotic resistance in each patient. However, this was a pilot study comparing alternative first-line regimens in a Korean population. Moreover, selection bias is ruled out by randomized allocation of the participants, so that the prevalence of primary antibiotic resistance is expected to be equally distributed among the therapeutic groups.

In conclusion, 14-d moxifloxacin-based sequential therapy is a more effective first-line eradication treatment than 14-d clarithromycin-based sequential therapy for H. pylori infection. The high eradication rate, excellent patient compliance, and safety of the moxifloxacin-based therapy suggest its suitability as an alternative to standard triple therapy. Further large prospective studies are required to determine the broad application of this regimen in comparison with currently approved first-line therapies.

A recent meta-analysis reported that the efficacy of sequential therapy for Helicobacter pylori (H. pylori) infection is modest in Asia, exemplifying the need to find a better regimen.

The potential role of moxifloxacin as an antibiotic agent useful for eradication treatment in H. pylori infection has been suggested by a few animal and human studies.

This pilot study’s design and findings could be used to determine sample size for a larger, prospective study aiming to test the efficacy of moxifloxacin-based sequential therapy for H. pylori eradication.

H. pylori is found in the stomach and is linked to the development of gastritis, peptic ulcers, and stomach cancer. To prevent recurrence in patients with these diseases, it is necessary to eradicate H. pylori infection.

This study presents a topic of interest in clinical practice, not often considered in literature. Methods and study population are adequate, and conclusions are reasonable and of possible practical use. This article presents an important issue. This is the first study to compare the efficacy of 14-d moxifloxacin-based sequential therapy with that of 14-d clarithromycin-based sequential therapy.