AIM: To explore the relationship of clinicopathological features and the distribution of neutrophils in the tumor microenvironment with the prognosis of cholangiocarcinoma.

METHODS: Two hundred and fifty-four formalin-fixed and paraffin embedded tissue blocks were analyzed, including tissues from cholangiocarcinoma (n = 254), and tumor adjacent tissues (n = 238). Tissue sections were stained for CD15 using immunohistochemical staining. CD15 expression was detected to identify the distribution of neutrophils in the local tumor microenvironment. The neutrophil density of the tumor tissues and the adjacent tumor tissues was detected to reflect their inflammatory status. Clinical data and follow-up information of cholangiocarcinoma patients who underwent surgery from January 2004 to December 2010 were analyzed retrospectively. The relationship between clinicopathological features and the distribution of neutrophils with prognosis of the patients were analyzed.

CONCLUSION: Patients with high CD15 expression in cancer tissues had shorter DFS and OS. High expression of CD15 is an independent risk factor for OS.

Cholangiocarcinoma originates from epithelial tumors. Diagnosis is often delayed, and prognosis is poor. Clinicians and scientists around the world are committed to determining the etiology of cholangiocarcinoma. Most cholangiocarcinomas are primary. Research from the United States and Europe[1-4], found that hepatitis C is the most important risk factor for cholangiocarcinoma (intrahepatic cholangiocarcinoma in particular), but research from South Korea and China[5-7] found that hepatitis B is a risk factor in intrahepatic cholangiocarcinoma. A study from Japan confirmed the results from Europe and the United States[8]. These studies also confirmed that cirrhosis is a risk factor of cholangiocarcinoma. Primary sclerosing cholangitis may develop into cholangiocarcinoma (especially hilar cholangiocarcinoma), which is characterized by chronic inflammation complicated with liver damage and, possibly, the proliferation of progenitor cells. The incidence rate of cholangiocarcinoma among these patients is 5%-10%[9-12]. Approximately 50% of the patients with primary sclerosing cholangitis were later diagnosed with cholangiocarcinoma within 24 mo[9-13]. The average age of these patients is about 40 years old, while the average age of the general population who develop cholangiocarcinoma is about 70 years old[4,14]. Although there are many risk factors that might promote the development of primary sclerosing cholangitis into cholangiocarcinoma, they are not sufficient to guide risk stratification for disease surveillance[11,15,16]. A full understanding of the biological characteristics of cholangiocarcinoma and important factors that may affect treatment strategies, and implementation of standardized and individualized treatment are the keys to the treatment of cholangiocarcinoma. The relationship between inflammation and cancer development has been the concern of many scholars, and this relationship is also the focus of the present study. In 2011, Hanahan et al[17] in a review published in Cell proposed ten important features of malignant tumors, including self-sufficiency in growth signals, insensitivity to antigrowth signals, resisting cell death, limitless replicative potential, sustained angiogenesis, tissue invasion and metastasis, tumor promotion inflammation, avoiding immune destruction, deregulating cellular energetics, genome instability and mutation. Among these, the tumor-promoting inflammation represents the seventh most important feature. In the course of infection or injury repair, a large number of inflammatory cells in vivo aggregate and release large amounts of cytokines, chemokines, growth factors and cytotoxic mediators, forming a local inflammatory microenvironment. In the process of tumor formation, development and metastasis, cell death and appreciation would occur in a large number of cells, which would produce a large amount of inflammatory mediators. Tumor cells can also produce the factors released through accumulation of inflammatory cells, and these factors can lead to the formation of blood vessels and inflammatory responses. The persistent interactions of inflammatory mediators and cytokines in inflammatory cells lead to the long-term presence of a tumor inflammatory microenvironment, thereby promoting tumorigenesis, accelerating tumor development, and playing an important role in the various stages of tumor metastasis. Neutrophils are major inflammatory cells in the tumor microenvironment. CD15 is one of the markers of mature granulocytes. We used CD15 staining to evaluate the distribution of neutrophils in tumor microenvironment, and to explore the relationship of clinicopathological features and the neutrophil distribution in the tumor microenvironment with prognosis.

Two hundred and ninety one resected specimens from patients who underwent operations for cholangiocarcinoma from January 2004 to December 2010 at the Department of General Surgery, General Hospital of Air Force, China, were analyzed retrospectively. Clinical data (including age, gender and tumor pathological features) were collected. The patients had a clear diagnosis of cholangiocarcinoma and had neither received radiotherapy or chemotherapy before surgery, nor preoperative liver transplantation. Those with a pathological diagnosis of sarcoma, mixed cell carcinoma or hepatocellular carcinoma were excluded. After surgery, all tissue samples were fixed in 4% formalin for 24 h, and then embedded in paraffin for hematoxylin and eosin (HE) and immunohistochemical (IHC) staining. Sections were cut at 4 μm. HE-stained samples were individually examined microscopically by two independent pathologists (Ren L and Mao ZY). The clinicopathological characteristics of the tumors are shown in Table 1.

Mouse anti-CD15 Monoclonal Antibody (ZM-0037, Working Solution, Zhongshan Golden Bridge Biotechnology Inc., Beijing, China) was used and heat-induced epitope retrieval (pressure cooker preheat for 5 min in citrate buffer, pH = 6) was used before to CD15 staining. Primary antibodies were then added and incubated for 2 h at 37 °C. Slides were processed on an immunostainer (LabVision Autostainer 360, Fujian, China). The primary antibody was replaced by phosphate-buffered saline as a negative control to assess the specificity of the antibodies. Hematoxylin-counterstained sections were mounted in aqueous mounting medium and observed under a light microscope.

RESULTS
Expression of CD15 in tumor tissues and adjacent tissues 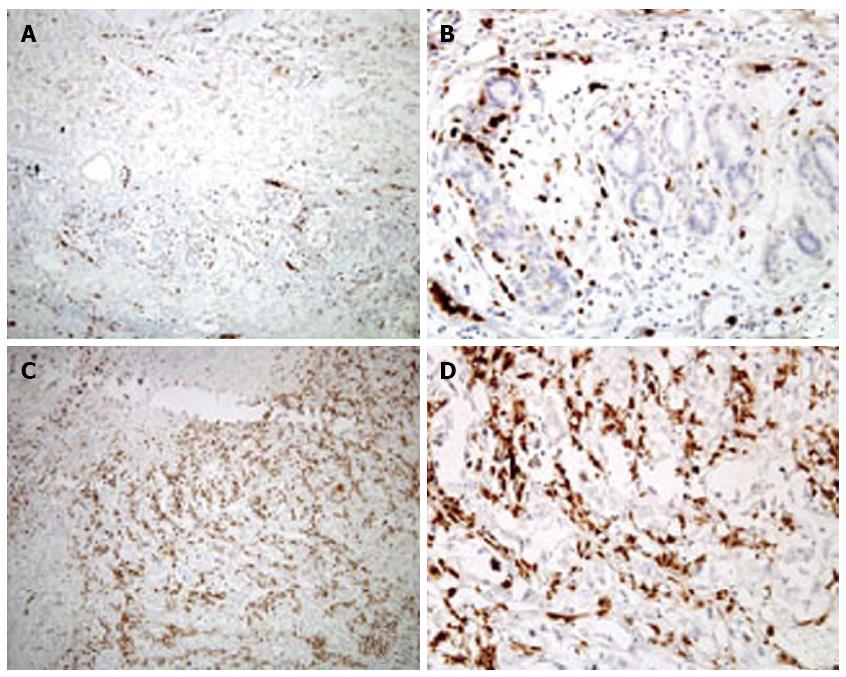 The correlations between CD15 expression and clinicopathological features are shown in Table 3. The positive expression rate of CD15 was significantly related to the TNM stage (Figure 2). 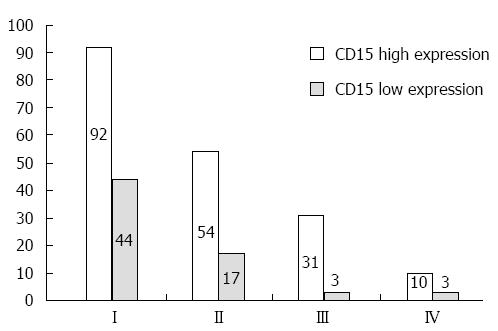 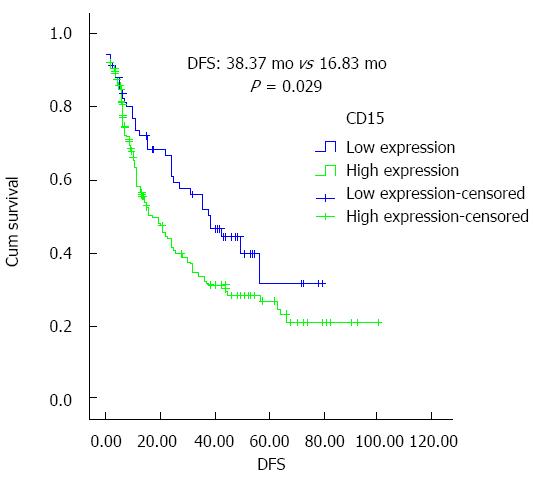 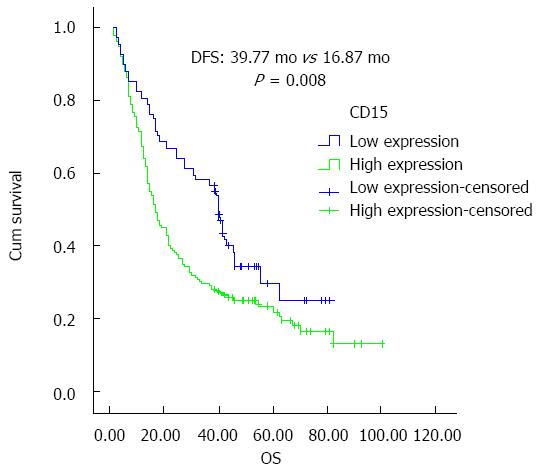 Although inflammation is a risk factor for the onset of cholangiocarcinoma, the mechanism is not fully understood. Many experiments found that the relationship between a tumor and inflammation can be studied based on the local inflammatory tumor microenvironment, and a systemic inflammatory response. For example, C-reactive protein and IL-6 are considered to reflect the level of markers of systemic inflammation. Increased levels can predict the prognosis of various tumors, and the higher the level of the inflammation, the worse the prognosis[18,19]. Coincident with our results, Jensen et al[20] reported that the presence of intratumoral neutrophils was an independent prognostic factor for poor OS following nephrectomy in localized clear cell tumors, such as renal cell carcinoma. Li et al[21] confirmed recently that intratumoral neutrophils were a poor prognostic factor for hepatocellular carcinoma following resection. Furthermore, elevated neutrophil and monocyte counts in peripheral blood are associated with poor survival in patients with metastatic melanoma[22,23], small-cell lung carcinoma[24], gastric cancer[25-27] and other tumors[28]. All these studies indicated that patients with tumors infiltrating neutrophils have a poor prognosis, which may offer some help in a preliminary clinical prognosis of cancer patients, and provide clues for treatment.

CD15 is a specific marker of neutrophils[29]. The white blood cell count is an important index in the detection of inflammation in vivo. Inflammation can promote tumor angiogenesis, growth and invasion[30-32]. Neutrophils account for 50%-70% of total circulating leukocytes[33,34]. Neutrophils are the most abundant white blood cells, which help the body against invading microorganisms. Therefore, the number of neutrophils is an important inflammatory marker. Currently the neutrophil-to-lymphocyte ratio is studied extensively, and the ratio is used to assess the overall survival of cancer patients as a simple and effective indicator. A higher ratio indicates a poor overall survival, and a risk of early relapse[35-37]; thus, an increased neutrophil count and CD15 expression. This study analyzed the effects of CD15 expression in local inflammatory status on DFS and OS, and found that CD15 expression in cancer tissues was significantly higher than in the adjacent tissues. By univariate analysis, CD15 expression in cancer tissues affected significantly the DFS and OS, and high CD15 expression in cancer tissues predicted higher risk of tumor recurrence and mortality. CD15 is a primary marker for neutrophils, high CD15 expression indicates increased neutrophil count and reduced lymphocyte count. The release of large amounts of cytokines and other inflammatory cytokines may contribute to an increase in tumor metastasis and tumor angiogenesis[38-43]. Therefore, the CD15 expression in cancer tissues suggested poor prognosis in this study, which is consistent with the findings mentioned above. CD15 positive neutrophils may predict poor prognosis, especially for the prediction of OS, but not for DFS. However, prediction of OS could help in the treatment of postoperative cholangiocarcinoma, and CD15 immunohistochemical staining results could predict the survival of patients earlier, such that intervention can be started earlier, which would extend the survival of patients.

El-Khoueiry et al[48] used Sorafenib in two clinical studies for unresectable or metastatic gallbladder carcinoma and cholangiocarcinoma treatment, but did not achieve objective responses. Patients with biliary cancers receiving this drug showed some therapeutic benefit. Additional studies with Sorafenib in combination with chemotherapy or other targeted agents may be warranted. Takahashi et al[49] suggested that Axitinib is a promising therapy for vascular endothelial growth factor-expressing cholangiocarcinoma, irrespective of tumor origin and Gemcitabine sensitivity. El-Khoueiry et al[50] reported that Sorafenib and Erlotinib did not have promising clinical activities in an unselected population of patients with biliary cancers. Improved patient selection, based on tumor biology and molecular markers, is critical for future evaluation of targeted therapies in this disease. Based on several promising phase II clinical trials currently underway, the most promising targeted agents for cholangiocarcinoma thus far include anti-EGFR agents, MEK inhibitors and anti-angiogenic agents[44].

In summary, distribution of local inflammatory cells in patients with cholangiocarcinoma in the tumor microenvironment is valuable to assess prognosis. The local inflammatory state, in varying degrees, reflects the in vivo state of chronic inflammation in patients with malignant tumors. The chronic inflammatory state and the resulting immune status deserve further study and are meaningful for subsequent treatment of cancers. These results indicate that neutrophil distribution in various cancers might indicate poor prognosis and may serve as a target for clinical treatment.

IHC staining of CD15 to mark neutrophils and to reflect the inflammation caused by cholangiocarcinoma is a fast, convenient and economical method in clinical applications.

Cholangiocarcinoma originates from epithelial tumors. Diagnosis is often delayed and prognosis is poor. Cholangiocarcinoma accounts for 3% of all gastrointestinal cancers, and is the second most common tumor in hepatobiliary cancers.

The authors conducted an IHC analysis of CD15 to assess the neutrophil distribution and to further reflect the inflammatory state of cholangiocarcinoma. The study is very interesting.