Liver test abnormalities have been described in up to 60% of patients with systemic lupus erythematodes (SLE) at some point during the course of their disease. Prior treatment with potentially hepatotoxic drugs or viral hepatitis is commonly considered to be the main cause of liver disease in SLE patients. However, in rare cases elevated liver enzymes may be due to concurrent autoimmune hepatitis (AIH). To distinguish whether the patient has primary liver disease with associated autoimmune clinical and laboratory features resembling SLE - such as AIH - or the elevation of liver enzymes is a manifestation of SLE remains a difficult challenge for the treating physician. Here, we present six female patients with complex autoimmune disorders and hepatitis. Patient charts were reviewed in order to investigate the complex relationship between SLE and AIH. All patients had coexisting autoimmune disease in their medical history. At the time of diagnosis of AIH, patients presented with arthralgia, abdominal complaints, cutaneous involvement and fatigue as common symptoms. All patients fulfilled the current diagnostic criteria of both, AIH and SLE. Remission of acute hepatitis was achieved in all cases after the initiation of immunosuppressive therapy. In addition to this case study a literature review was conducted.

Core tip: Hepatic involvement in patients with systemic lupus erythematodes (SLE) is considered to be rare. The differences between hepatic involvement caused by hepatotoxic drugs, coincident viral hepatitis, non-alcoholic fatty liver disease or concurrent autoimmune hepatitis (AIH) as independent disease has not been defined clearly in patients with SLE. This case report describes six patients who fulfill the current diagnostic criteria for both SLE and AIH, and thus represents the largest case series in the literature.

Systemic lupus erythematodes (SLE) is a multisystem autoimmune disorder involving various organs such as kidneys, skin and the central nervous system. Liver involvement is normally not part of the spectrum of SLE, but is seen in up to 60% of SLE patients[1]. Hepatotoxic drugs, coincident viral hepatitis and non-alcoholic fatty liver disease (often induced by steroids) are the most commonly described causes of elevated liver enzymes in SLE[2].

The co-occurrence of autoimmune hepatitis (AIH) and SLE is considered to be rare and only few case reports have been published so far (Table 1). Diagnostic criteria in accordance with the International Autoimmune Hepatitis Group and the “simplified criteria” are based on elevation of Immunglobulin G (IgG), demonstration of characteristic autoantibodies, histological features of hepatitis and the absence of viral disease[3,4]. The clinical presentation of AIH ranges from asymptomatic disease recognized only by incidentally ascertained biochemical abnormalities to an acute or even fulminant hepatitis. Female predominance and occurrence peaks in early adult life and in the 4th decade of life are characteristic[5]. In symptomatic cases patients are often affected by non-specific symptoms such as nausea, anorexia, abdominal discomfort and jaundice. A common extrahepatic manifestation of AIH may be arthralgias, which are also often seen in SLE.

A patient with SLE and elevated liver enzymes presents a demanding differential diagnosis for the rheumatologist. While elevated IgG and anti-nuclear antibodies (ANAs) are characteristic for both AIH and SLE[5], there are few serological markers, which are highly specific for the two different diseases. Anti-double stranded DNA (anti-dsDNA) antibodies are associated with SLE but are also found in patients suffering from AIH[6]. Data on sensitivity for the diagnosis of SLE range from 25%-85%[7]. Czaja et al[6] tested sera from 53 patients with AIH by enzyme immunosorbent assay and indirect immunofluorescence using the Crithidia luciliae substrate and detected anti-dsDNA in 30 patients (57%). Also anti-Smith antibodies are frequently found in SLE patients and approximately 99% of individuals with positive anti-SM match the diagnostic criteria for SLE[7]. Specific markers for AIH, which usually do not occur in SLE, are soluble liver antigen (SLA), Liver-pancreas, smooth-muscle antibody (SMA) with specificity for F-actin and microsomal autoantigens, such as anti-liver kidney antibodies (anti-LKM antibody)[5]. While these markers may help to segregate AIH coincident with SLE serologically, liver histopathology represents the key feature that distinguishes AIH in SLE from nonspecific hepatic involvement in SLE. In patients with AIH liver histopathology shows characteristic lesions, such as interface hepatitis, rosetting of hepatocytes, emperipolesis and - consecutive to inflammation - fibrosis (Figure 1)[5]. In contrast, liver histology in SLE usually shows changes attributable either to drug toxicity or non-specific liver involvement as e.g., fatty degeneration or hydropic hepatocytes[2,8]. 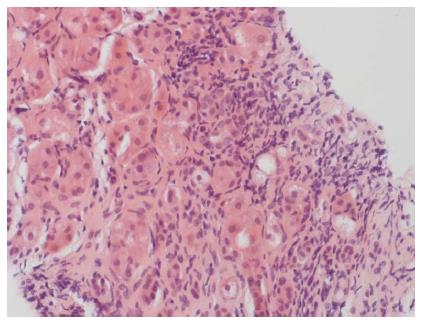 Figure 1 Typical histopathology of a patient with autoimmune hepatitis (case 1). Cirrhotic changes of the liver parenchyma with interface hepatitis. The portal and periportal inflammatory infiltrate is composed of lymphocytes, monocytes/macrophages and plasma cells (haematoxylin and eosin staining; × 200).

As the diagnosis of AIH is relevant in SLE patients with regards to choices of immunosuppressants, long-term outcome and optimal surveillance of the patients, adequate attention should be taken to differentiate between “true additional” AIH or non-specific liver involvement.

In the following, we present six patients with SLE and the concomitant diagnosis of autoimmune hepatitis. All patients matched the current diagnostic criteria of both AIH as well as of SLE. A review of the literature was performed and published cases were summarized (Table 1).

Five of six patients had a history of Hashimoto’s thyroiditis as coexisting autoimmune disease. Other concomitant autoimmune disorders like primary sclerosing cholangitis, psoriasis and Raynaud’s phenomenon occurred in one patient respectively.

The diagnosis of SLE was established based on the American College of Rheumatology (ACR) classification criteria[3,9]. All patients fulfilled the simplified diagnostic criteria of AIH with a median score of 8 points (range 6-8 points)[4].

Liver biopsy was performed due to elevated transaminases in all cases and showed typical signs of AIH (Figure 1). Advanced fibrosis/cirrhosis was found in three patients.

Treatment was initiated in all cases with prednisolone pulse-therapy[10] and extended to a combination of azathioprine and hydroxychloroquine in four cases. A monotherapy with azathioprine or mycophenolate mofetil after prednisolone pulse-therapy was started in one patient, respectively. Two patients required a change of treatment due to azathioprine intolerance and switched to treatment with cyclophosphamide. Remission of acute hepatitis was achieved in all cases. Complete biochemical remission including normalization of transaminases as well as IgG levels was achieved in all patients after six months of treatment.

One patient (case 3) developed hepatocellular carcinoma (HCC) in 2012, six years after diagnosis of AIH. In her first liver biopsy in 2006, the patient showed liver cirrhosis. The patient was regularly seen at the outpatient clinic for follow-up visits and ultrasound screening for HCC was performed every six month. Multifocal HCC (barcelona clinic liver cancer-stadium C) was diagnosed six years after diagnosis of AIH. Surgical resection or liver transplantation as curative treatment option was not feasible due to advanced tumor stage. The patient underwent transcatheter arterial chemoembolization every three month. Since July 2013, the patient receives additionally systemic therapy with sorafenib due to tumor progression. Information of patient characteristics is given in Table 2.

In this case series, we present six patients who fulfill the current diagnostic criteria for both SLE and AIH[3,9]. Interestingly, these patients presented with clinical and serological symptoms suggestive for AIH and liver disease was the leading disease in five of our patients. In addition to symptoms suggestive for AIH, the patients had distinctive features of SLE, supporting the interpretation of coexistence of the two conditions.

To our knowledge, only 35 cases of patients with the concurrent diagnosis of SLE and AIH have been published altogether (Table 1).

AIH and SLE are considered distinct diseases, which can be associated like other autoimmune diseases. This is supported by the fact, that five of our six patients had coexisting autoimmune disorders, as e.g., Hashimoto’s thyroiditis.

Differential diagnosis of elevated liver enzymes in patients with SLE as non-specific hepatic involvement or as AIH is demanding. While serological markers, such as ANA, anti-dsDNA or raised IgG can be strongly overlapping in SLE and AIH, histology is all the more essential to distinguish AIH in SLE from non-specific hepatic involvement in SLE. In accordance with the revised simplified criteria of AIH, histological demonstration of hepatitis compatible with AIH[12] is the essential diagnostic criterion of AIH[3,5]. We suggest that AIH needs to be considered in the differential diagnosis of any SLE patient with elevated liver enzymes. Liver biopsy is therefore crucial in these patients.

Treatment strategies are determined by the predominant disease, which in our case series was AIH. The recommended treatment for both, AIH and SLE, are immunosuppressive strategies with therapeutic success. Except one, all published cases responded well to immunosuppressive treatment (Table 1). It has been shown for AIH, that complete biochemical remission is crucial for long-term prognosis of these patients[13]. There is no data available for the prognosis of AIH with concomitant SLE but publications suggest, that achievement of complete remission is crucial not only for long-term survival in these patients but also regarding quality of life. However, AIH has a more aggressive histology pattern and prognosis of untreated symptomatic autoimmune hepatitis is poor with a five-year survival rate below 25% in untreated patients versus 80% in those treated with corticosteroids[14].

To summarize, AIH and SLE are distinct diseases, whose combination of clinical symptoms and diagnostic markers overlap. While SLE and AIH are rarely diagnosed as concomitant diseases in one patient, hepatic involvement in patients with SLE is sometimes observed during the course of disease. In our view, AIH needs to be considered in the differential diagnosis of any SLE patient with elevated liver enzymes, and liver biopsy should become mandatory in such patients.

We would like to thank Till Krech and Alexander Quaas from the Department of Pathology for the outstanding cooperation.

Current diagnostic criteria for both SLE and AIH were fulfilled.

Liver biopsy was performed due to elevated transaminases in all cases and showed typical signs of AIH. Advanced fibrosis/cirrhosis was found in three patients.

Autoimmune hepatitis needs to be considered in the differential diagnosis of any SLE patient with elevated liver enzymes, and liver biopsy should become mandatory in such patients.

This is a case series and literature review paper of patients with AIH-SLE overlap. It is very important to clarify the characteristics of these patients.