AIM: To study the clinical significance of the expression of metastasis-associated splice variants of CD44 (CD44v) in early primary liver cancer (PLC).

METHODS: Expression of CD44v mRNA in fresh resected tumor samples from 8 patients with early PLC was detected by RT-PCR. The expression intensity of CD44v mRNA was analyzed on images of Southern hybridization using the Kontron IBAS image analysis system. Meanwhile, the pathological evidence of metastasis was studied by microscopy.

CONCLUSION: Expression of CD44v mRNA may be a useful indicator of the metastatic potential of early PLC.

The importance of metastasis-associated splice variants of CD44 (CD44v) in tumor metastasis has been noted recently. In this study, we detected the expression of CD44v in patients with early primary liver cancer (PLC) and explored the clinical significance of CD44v in early PLC.

Fresh samples of tumor tissues (0.5 g each) were obtained from surgically resected specimens of 8 patients with early PLC. According to the standard made by the Chinese Cooperated Pathological Study Group of Liver Cancer, these tumors were early PLC (tumor diameter < 3 cm ). Control samples were obtained from 6 patients with cavernous hemangioma and 3 patients with liver trauma. All samples were stored at -196 °C within 10 min of obtainment and were kept frozen until use.

RNA was extracted from the samples according to the method of Chomzynski and Sacchi[1]. Reverse transcription was carried out on the total RNA samples using an AMV reverse transcriptase kit (Promega Co, United States). The first strands of cDNA were synthesized at 42 °C for 60 min in a 20 μL solution (upstream primer: 5'-GACAGACACCTCAGTTTTTCTGGA-3'; downstream primer: 5'-TTCCTTCGTGTGTGGGTAATGAGA-3' ). PCR was carried out using 35 cycles of the following conditions: 94 °C for 1 min, 55 °C for 1 min, and 72 °C for 1.5 min. Twenty μL of the PCR products was separated on an ethidium bromide-stained 1.5% agarose gel and transferred to a nitrocellulose filter (Amersham Co., Britain). Hybridization was carried out at 42 °C for 16 h with 32P-labelled oligonucleotide probe (5’-TGAGATTGGGTTGAAGAAATC-3’). Primers and probe were designed according to the published human CD44v cDNA sequence[2]. The filters were exposed to Fuji X-ray film for 20 h, and images of the Southern hybridization results were semi-quantitatively analyzed with the IBAS II image analysis system (Kontron Co, Germany); the expression intensity of CD44v mRNA was indicated by gray values of these films, with the gray value of negative expression set at zero. Weak expression was classified for grey values of 0-50, moderate expressions for 51-150, and over-expression for > 150.

All specimens were studied under light microscope to evaluate know whether the tumor capsule was complete or deficient, whether it had been penetrated by tumor cells, whether tumor cells had gone into the portal vein of normal liver tissue, and whether daughter tumor nodules had appeared in normal liver tissue near the main mass. In addition, we assessed the degree of differentiation of the tumor cells. The data for these criteria are not published. The age, sex, level of alpha-fetoprotein (AFP) and other details of the patients are shown in Table 1, Figure 1. 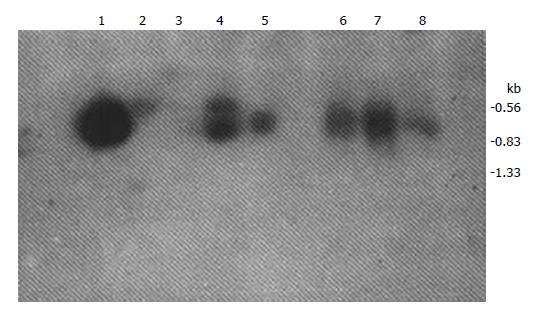 The expression of CD44v mRNA in the liver tissue was significantly different between the PLC and control samples (P < 0.05). The expression intensities of CD44v mRNA in early PLC had positive correlation with the metastatic evidence, including deficiency of tumor capsule, penetration of tumor capsule, tumor embolus in portal vein and daughter tumor nodules near main mass, etc.) (P < 0.05).

CD44 is a surface adhesion molecule that participates in cell-cell and cell-matrix interactions[3,4]. "Standard" CD44 can be modified by the insertion of transcripts from any, some, or all of at least five extra exons[2,5], leading to production of CD44v. A single cell may contain two or more variants of mRNA from the same gene simultaneously. CD44v may play an important role in tumor growth and metastasis. Convincing evidence for this feature has been provided previously[6,7]. Currently, a human homologue of rat metastasis-associated CD44v has been isolated from the cell lines of human large cell lung carcinoma, colon carcinoma and breast carcinoma[5]. Moreover, expression of CD44v has been detected in fresh human tumor tissues of breast carcinoma, colon carcinoma[8], gastric carcinoma[9], melanoma[10] and metastases in brain[11].

No clinical symptoms of PLC had occurred at the time of diagnosis for any of the 8 cases evaluated. The levels of serum AFP were normal in 7 of the 8 cases after the patients were hospitalized. It is indicated that when treating patients with early PLC not to ignore the possibility of the presence of metastases, regardless of an absence of clinical symptoms of PLC and low level of serum AFP. The whole condition of the patient should be paid attention, including the expression of CD44v.

All of the 8 patients with early PLC were associated with hepatitis of 4 years to 20 years duration, as well as pathological evidence of cirrhosis. Even though we cannot be sure whether there is an exact correlation between the expression of CD44v mRNA and hepatitis or/and cirrhosis in early PLC, we believe that the expression of CD44v mRNA may indicate the metastatic potential in PLC patients with hepatitis and cirrhosis.

The degree of differentiation of PLC cells was poorer in patients with moderate and intense expression of CD44v mRNA than in those with weak expression. The reason for this, however, needs to be further studied.

One control sample expressed CD44v mRNA weakly, and we do not know whether this is a false-positive result or it has some other significance.

Metastatic potential of early PLC may be related to the expression of CD44v mRNA. The latter may be a useful indicator in evaluating metastasis. In addition, anti-CD44v treatment may be an important method for increasing the survival rate of patients with early PLC.