AIM: To investigate anxiety and depression propensities in patients with toxic liver injury.

CONCLUSION: Psychological factors that present vulnerability to the temptation to use alternative medicines, such as herbs and plant preparations, are important for understanding toxic liver injury.

As interest in health is increasing due to the rising average life expectancy, the aging population, and increased income, the use of unconventional medicines processed from various natural substances is increasing[1]. The frequency of the use of unconventional medicines is currently far higher than previously reported. The extents of use and costs of such medicines are also more wide and expensive in the United States[2].

In South Korea, liver injuries caused by the abuse of oriental medicines and folk remedies with no clinical study results are increasing because many people still depend on easily accessible oriental medicines and folk remedies[3]. In particular, the groundless belief that natural extracts and plant preparations have less adverse effects is widespread among the general public, and liver injuries caused by the misuse and abuse of such substances are gradually increasing[4]. A retrospective multi-center preliminary study, which was performed in 7 university hospitals in South Korea across the country in 2003, reported that the estimated annual incidence of hospitalization of patients with toxic hepatitis at a university hospital in South Korea was 2629.8[5]. Four years investigation of patients with acute liver injury in the Gyeongju area, located in southeast South Korea, found that 52% of patients had drug-induced liver injuries, and about 50% of such liver injuries were caused by plant preparations[6]. In a recent prospective nationwide study of drug-induced liver injury in South Korea, the most common cause of drug-induced liver injury was found to be “herbal medications”[7]. Toxic hepatitis is often seen in clinical settings, but the general public has a lower interest in and less knowledge of toxic hepatitis than viral hepatitis. Even though most people in South Korea are exposed to oriental medicines and supplementary health foods made of plant preparations that may induce hepatotoxicity, basic data about the frequency, the clinical catamnesis and the medical and social costs of hepatotoxicity caused by such substances are insufficient. Therefore, active reports on such clinical experiences are needed; however, it is difficult to definitively diagnose most cases of liver injuries that are presumed to be caused by plant preparations; thus, they are kept idle[8-10]. Furthermore, because repetitive exposures to preparations that cause liver injuries have been clinically observed, studies are needed on the psychoneurotic propensities of patients who are exposed to supplementary health foods, oriental medicines, and folk remedies that cause liver injuries.

The symptoms of anxiety and depression are often observed in psychiatry, and they are also often discovered in patients with non-psychiatric physical disease. Considerable research has been conducted regarding anxiety or depression in non-psychiatric general or medical practice[11-14].

This is a prospective, multi-center study using questionnaire surveys to determine the anxiety and depression of patients with toxic liver injury who were selected by their Roussel Uclaf Causality Assessment Method (RUCAM) scores, which were determined from their medical records. The RUCAM system is a means of assigning points for clinical, biochemical, serologic and radiologic features of liver injury, which gives an overall assessment score that reflects the likelihood that the hepatic injury is due to a specific medication[15].

Toxic liver injury was defined as an acute liver injury, caused by medicinal herbs, plant preparations, health foods and folk remedies, with the exception of commercial drugs, having a score of 4 or higher on the RUCAM scale. After the purpose of this study was explained to patients with liver injury, only the patients, who agreed to participate in the survey, were selected as subjects. The following patients were excluded from this study: patients whose cases have been diagnosed as or who are receiving treatment by a psychiatrist for depression disorder, dysthymic disorder, schizophrenia, schizoaffective disorder, or organic mental disorder, and patients who did not respond to the survey during outpatient visits.

Questionnaires including the following questions were answered by the selected subjects and were collected, and the characteristics of the clinical study groups were compared and analyzed. The questionnaire included general questions on age, sex, etc.; questions from the Hospital Anxiety-Depression Scale (HADS), the Beck Anxiety Inventory (BAI), the Beck Depression Inventory (BDI), and the hypochondriasis scale. The questionnaire surveys were conducted during the hospital visit for Group 1 and at the time of admission for Groups 2 and 3.

HADS was developed by Zigmond and Snaith in 1983 to identify the caseness (possible and probable) of anxiety disorders and depression among patients in nonpsychiatric hospital clinics[17]. The tool includes 14 items, seven related to anxiety and seven related to depression, each scored between 0 and 3. The authors recommended that a score above 8 on an individual scale should be regarded as a possible case and a score above 10 a probable case[18]. To rule out somatic disorders on the scores, all symptoms of anxiety or depression that were related to a physical disorder, such as dizziness, headaches, insomnia, anergia and fatigue, were excluded.

BAI is a 21 item self-report questionnaire measuring common symptoms of clinical anxiety, such as nervousness and fear of losing control. Respondents indicated the degree to which they are affected by each symptom. Each symptom is scored on a range from 0 to 3, with higher scores corresponding to higher levels of anxiety. Thirteen items assess physiological symptoms, five describe cognitive aspects, and three represent both somatic and cognitive symptoms[19]. A score above 21 is considered a breaking point and was distributed among each of the groups.

BDI is a 21 item self-reported questionnaire that measures the status of clinical depression without psychological diagnosis[20]. It consists of 8 items of physical depression and 13 items of non-physical depression. The BDI covers cognitive, emotional, and somatic symptoms, and its reliability, sensitivity and specificity have a high affinity for diagnosing depression[21,22]. Each item is scored ranging from 0 to 3, with higher scores corresponding to higher levels of depression. A score above 21 is considered a breaking point and was divided evenly among each of the groups.

To measure hypochondriasis, 33 questions corresponding to the hypochondriasis in the Minnesota Multiphasic Personality Inventory, which is widely used in psychiatry, were extracted, and the total score was used for data analysis.

The SPSS for Windows 19.0 (IBM, New York, NY, United States) statistics program was used for statistical processing of the data. Main results were presented as mean ± SD and the statistical significance was determined by P values smaller than 0.05. For comparison of continuous variables among the patient groups and the control groups or comparison of various variables depending upon different severity levels in the patient groups, nonparametric analyses (Kruskal-Wallis test and subsequent Mann-Whitney U test) were performed. The categorical variables were analyzed using the χ2 test. 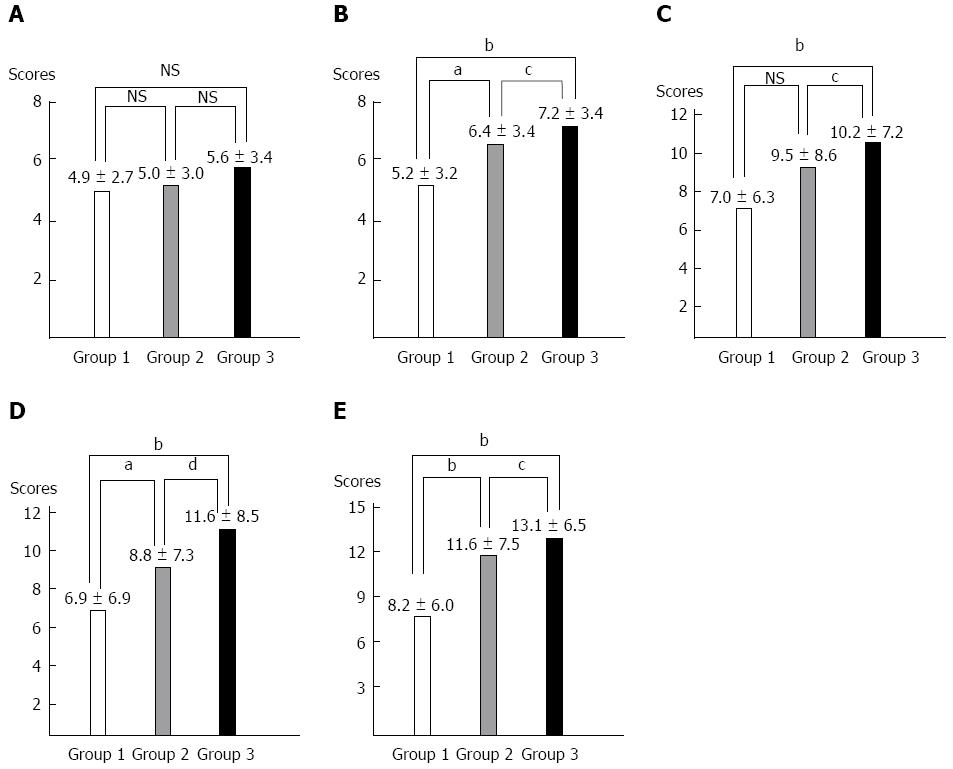 The present study demonstrates that patients with toxic liver injury had high anxiety and depression propensities. Many studies have recently been conducted on anxiety and depression symptoms accompanying various medical diseases such as diabetes[23,24], cardiovascular diseases[25,26], and chronic obstructive pulmonary disease[27,28]. This study has a high value because this was the first study that evaluated patients with toxic liver injury from the psychiatric aspects of anxiety and depression. Furthermore, as a multi-center study, we are confident that the results of this study represent the nationwide pattern in South Korea.

From the above results, although the HADS levels were similar anxiety and depression tend to be observed slightly more in Group 3 compared to that of Group 2 and more in Group 2 compared to that of Group 1. In HADS, the anxiety subscale is not influenced by the 8 cut off point but the depression scale in Group 3 was significantly higher. In BAI and BDI, Group 3 showed a significantly higher rate of anxiety and depression. When subscale 21 was used as a cutoff point in BAI and BDI, the depression scale was particularly very high in the Group 3 patients. These observations show that both anxiety and depression are related to toxic hepatitis but that depression has a particularly high correlation. When the hypochondriasis scale is considered, Group 3 also displays a higher score. This general trend may be the result of the patients’ tendency, due to anxiety and depression, to seek herbal supplements or alternative medicine when faced with toxic hepatitis.

It is thought that an effective method for preventing toxic liver injury is to treat patients with special care in collaboration with psychiatric treatment rather than simply telling them not to ingest plant preparations or health foods that could cause toxic liver injury. Although it may not be economic to treat all patients by administering drugs in collaboration with psychiatric treatment, it is thought that it could be a good guide to apply these study results, at least generally, to patients who visit the hospital repetitively due to toxic liver injury. This is because the patients, who had visited the hospitals at least 2 or 3 times repetitively due to the toxic liver injury, had higher anxiety and depression scores (data not shown).

This study indicates that although it is important to treat toxic liver injury itself, it is necessary to take active measures to understand and improve anxiety and depression symptoms of patients in an effort to prevent toxic liver injury from occurring and recurring.

The authors present patients with herbal preparations-induced acute toxic liver injury had high anxiety and depression propensities. The results are interesting and indicate that psychological factors vulnerable to the temptation to use alternative medicines, such as herbs and plant preparations, are most important for understanding the toxic liver injury.