AIM: To compare the efficacy of different doses of sodium phosphate (NaP) and polyethylenglicol (PEG) alone or with bisacodyl for colonic cleansing in constipated and non-constipated patients.

METHODS: Three hundred and forty-nine patients, older than 18 years old, with low risk for renal damage and who were scheduled for outpatient colonoscopy were randomized to receive one of the following preparations (prep): 90 mL of NaP (prep 1); 45 mL of NaP + 20 mg of bisacodyl (prep 2); 4 L of PEG (prep 3) or 2 L of PEG + 20 mg of bisacodyl (prep 4). Randomization was stratified by constipation. Patients, endoscopists, endoscopists’ assistants and data analysts were blinded. A blinding challenge was performed to endoscopist in order to reassure blinding. The primary outcome was the efficacy of colonic cleansing using a previous reported scale. Secondary outcomes were tolerability, compliance, side effects, endoscopist perception about the necessity to repeat the study due to an inadequate colonic preparation and patient overall perceptions.

Core tip: Colonoscopy has become the standard procedure for the diagnosis and treatment of colon diseases. Adequate bowel cleansing is essential for a high-quality effective and safe colonoscopy. In non-constipated patients, compliance is higher with sodium phosphate (NaP) preparations, and bisacodyl is related to adverse effects. In constipated patients NaP plus bisacodyl is the most effective preparation.

Colonoscopy has become the standard procedure for the diagnosis and treatment of colon diseases[1]. An adequate colonic cleansing is necessary for a proper evaluation of the entire colonic mucosa and therefore for achieving a high quality colonoscopy[2]. Sodium phosphate (NaP) is a small volume hyperosmotic solution that provides effective colonic cleansing in preparation for colonoscopy. In the past years the popularity of orally administered NaP has increased because of its superior tolerance by patients compared with large-volume cleansing agents such as polyethylene glycol electrolyte solutions[3-5]. Although it presents a safety profile similar to other colonic cleansing agents, serious adverse events have been reported when administered in high volume or in patients with contraindications to NaP[6]. Polyethylenglicol (PEG) solutions are the most commonly used laxatives for colonic cleansing because of their safety profile and lack of contraindication. However, unpleasant taste and large volume of PEG lead to poor compliance and result in patient dissatisfaction. The two aforementioned agents are the most frequently used for colonic cleansing in many countries and despite the significant heterogeneity between different studies comparing them for colonic preparation, a systematic review showed similar adequate preparation rates, 75% for NaP and 71% for PEG[7,8]. Numerous clinical trials have also assessed prokinetic (metoclopramide, cisapride and tegazerod)[9-13] and laxative agents (magnesium citrate and bisacodyl)[14-16] associated with standard or lower volumes of this colon cleansing agents. Sharma et al[14] found that pretreatment with magnesium citrate or bisacodyl in addition to half-dose of PEG was associated with better preparation quality and patient satisfaction than full-dose of PEG. To our best knowledge, there is no study directly comparing whole and half-dose of PEG and NaP alone or in combination with bisacodyl in constipated and non-constipated patients. The aim of this study was to compare the efficacy and tolerability of whole doses of NaP and PEG and half-doses of those agents in combination with bisacodyl for colonic cleansing in constipated and non-constipated patients.

This was a randomized, double-blind, four-arm study stratified by constipation. The study was carried out in accordance with the declaration of Helsinki. All patients included in the study signed an informed consent form. The human ethics committee from our institution approved the protocol.

All patients older than 18 years old who were scheduled for an elective outpatient’s colonoscopy were eligible for participating in the study and were randomized in a 6-mo period (June-December 2011). As safety issues about NaP solutions have emerged, we only included healthy patients following the United States Food and Drug Administration recommendation to avoid renal damage. Patients were excluded if they presented one or more of the following characteristics: age younger than 18 years old, were hospitalized for any reason, hypersensibility to any of the components of PEG, NaP or bisacodyl, were under more than one antihypertensive medication, presented history of diarrhea (more than 3 bowel movements a day), acute or chronic renal failure, cardiovascular disease (history of myocardial infarction, congestive heart failure, unstable angina pectoris, unstable hypertension and/or cardiac arrhythmia), ascites, electrolite inbalance (hiponatremia, hipokalemia, hipocalcemia, hipomagnesemia or hyperphosphatemia), inflammatory bowel disease, partial or subtotal colectomy, ileus or suspected intestinal obstruction and pregnancy or breastfeeding, childbearing potential without contraception.

Patients who met all the inclusion criteria and no exclusion criteria were randomly assigned to receive one of the four colonic preparations according to a computer-generated randomization list. Randomization was stratified by constipation in order to make a subgroup analysis of constipated and non-constipated patients at the end of the study. Constipation was defined according to Thompson et al[17] criteria. Allocation was concealed using same color, size and weight closed boxes. The nurses that provided the patients with colonic preparation, the endoscopy assistant that evaluated the preparation compliance, tolerance and adverse reactions, the data analysts; and the endoscopists who evaluated bowel cleansing quality were blinded. If the patients had doubts about the preparation they could make a telephone call to a physician that was not blinded, was not present during colonoscopy nor participated in the endoscopic quality assessment, tolerability questionnaire, or statistical analysis. To reassure that endoscopists were blinded, a blinding challenge was performed after finishing the colonoscopy by asking them which of the four different colonic cleansing agents they thought the patients had received. A kappa coefficient of agreement was used for this purpose. A kappa under 0.3 and a non-significant P value was considered as an adequate blinding.

Prep 4 consisted of 2 L of PEG starting at the same time and with the same rate as mentioned before for prep 3 plus 20 mg of bisacodyl. Patients in all groups were encouraged to go through the same low fiber diet during the three days before the study and to adhere to a clear liquid diet from 8:00 am to midnight on the day before colonoscopy. Before colonoscopy the patients were asked to answer a questionnaire to assess patient satisfaction, tolerability, and compliance to the preparation. The questionnaire included yes/no responses for tolerance, preparation completed, and specific symptoms (nausea, vomiting, abdominal or chest pain, dizziness, bloating, and poor sleep). Before entering the Endoscopy Unit patients were asked not to reveal their assigned preparation to the Endoscopy Unit staff. Colonoscopies were done by four colonoscopists from the Endoscopic Unit and all studies were done between 7:30 am and 1:00 pm. All studies were performed using the same Storz Videocolonoscope. The quality of colonic cleansing was graded according to a previously reported scale[13] (Table 1). All endoscopists were trained on the scale using previously selected videos of colonoscopy with different colonic cleansing quality. Endoscopists were also asked if they thought there was a need to repeat the study due to inadequate preparation.

Statistical analysis were performed using statistical software SPSS for windows 10.0. Knowing that 70% of colonic cleansings are excellent or very good[1-3], a sample size of 88 patients in each group was calculated to detect a 20% difference in primary outcome with 80% of power at a standard level of significance α = 0.05. Categorical variables were compared using the Fisher exact test or χ2 test. A P value of less than 0.05 was considered significant. Results were analyzed according to the intention-to-treat principle. Handling of loss to follow-up: We evaluated different assumptions about the incidence of events among participants lost to follow-up and the impact of those assumptions on the estimate of effect for the primary outcome. For this purpose, we used the RILTFU/FU as proposed by Akl et al[18]. The RILTFU/FU is defined as the event incidence among those lost to follow-up relative to the event incidence among those followed up. The assumptions we evaluated by combining a range of RILTFU/FU values (1, 1.5, 2, 3.5 and 5) in the intervention group and control group.

A total of 349 patients scheduled for outpatient colonoscopy participated in the study and were randomized to receive one of the four colonic cleansing preparations. Three patients were excluded post-randomization because they met one or more exclusion criteria, 15 patients failed to present to the procedure and 7 presented incomplete colonoscopy because of fixed angulations (4 patients) or colonic neoplasia (3 patients). Finally, of the 346 randomized patients, information about the primary outcome was obtained from 324 patients (93%) (Figure 1). There were no significant differences among the four preparation groups with respect to: age, sex, cecal intubation, and constipation (Table 2).

There was no significant concordance between the endoscopists presumption and the colonic preparation group that the patients had been assigned to (P = 0.56, κ = 0.019). This observation reassures that the endoscopists were unaware of the assigned groups (blinding).

We obtained information about this outcome for 93% of patients. The quality of colonoscopic visualization was similar in the four different groups (Figure 2A). 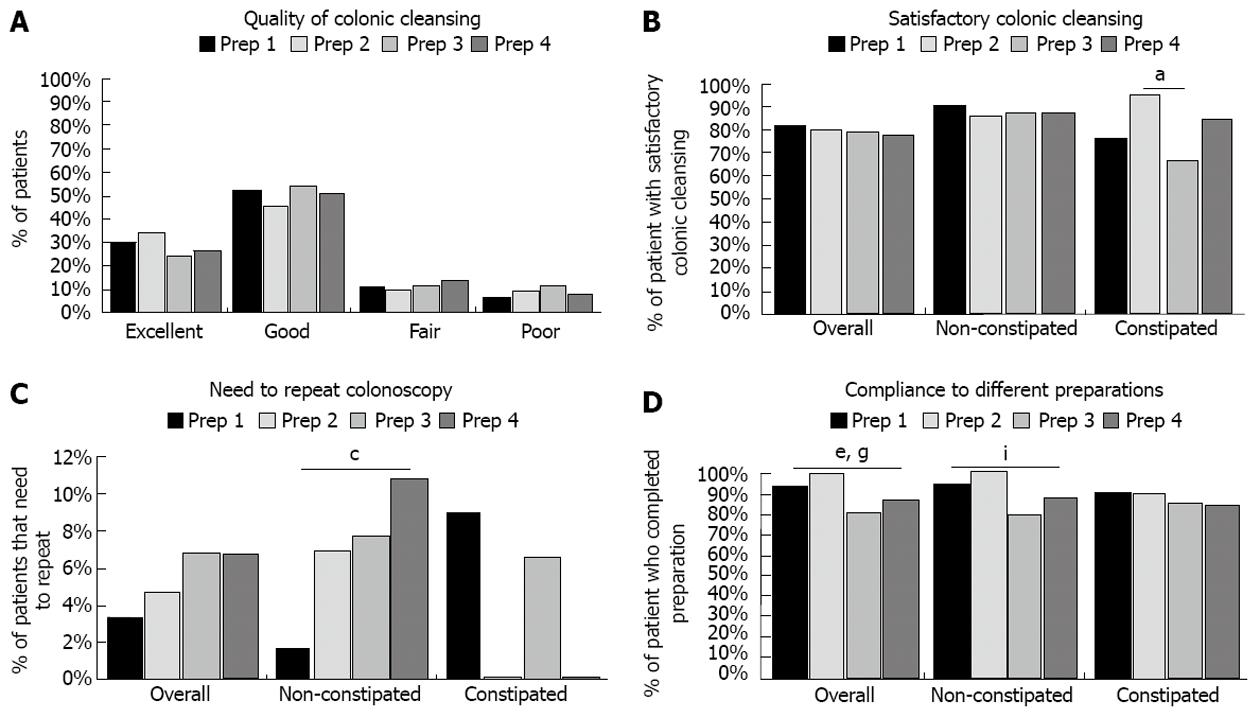 The most frequent adverse effects reported were: nausea (33%), bloating (30%) and abdominal pain (23%). There were no significant differences among different groups with respect to: nausea, vomiting, chest pain, bloating and dizziness (Table 3). Abdominal pain was more frequent in patients that received both preparations containing bisacodyl, prep 1, 16%, prep 2, 27%, prep 3, 19%, prep 4, 28%, but this difference didn´t reach statistical significance in the overall analysis (P = 0.2) (Table 3). The patients receiving NaP and bisacodyl preparations (prep 2) presented more frequently poor sleep than the other groups (P < 0.05) (Table 3). In non-constipated patients, abdominal pain was more frequent in those preparations containing bisacodyl: prep 2 (31%) and prep 4 (29%); compared to those without it: prep 1 (14%) and prep 3 (20%) (P < 0.05) (Table 3). The symptoms profile was similar between different preparations in constipated patients.

Only 21% of all the patients would refuse to take the same colonic preparation in the future and almost 37% would like to try a different preparation. This finding was similar in the different groups. There was also no significant differences in patients perception in different groups in constipated and non-constipated patients.

None of the different assumptions of incidence of events in loss to follow up patients changed significantly the estimate of the effect in the different outcomes.

The authors would like to thank Melissa Ann Kucharczyk and Valeria Fernandez.

Colonoscopy has become the standard procedure for the diagnosis and treatment of colon diseases. Adequate bowel cleansing is essential for a high-quality effective and safe colonoscopy.

Numerous clinical trials have assessed the efficacy of whole or low doses of sodium phosphate (NaP) and polyethylenglicol (PEG) alone or with bisacodyl. There is no information about which is the most suitable preparation regimen for constipated and non-constipated patients.

Their randomized clinical trial compared the efficacy and tolerability of whole and half doses of NaP and PEG alone or associated with bisacodyl preparations and explored the different effect on constipated and none-constipated patients.