Here, we present the case of a 74-year-old Japanese man with segmental intestinal necrosis, which developed after treatment with pulsed methylprednisolone for mononeuritis multiplex. The patient was weakly positive for myeloperoxidase (MPO)-anti-neutrophil cytoplasmic antibody (ANCA). Computed tomography and surgical findings were compatible with nonocclusive mesenteric ischemia (NOMI). He underwent small intestinal resection by emergency surgery and an intestinal fistula was made. Pathologically, necrotizing vasculitis with fibrinoid necrosis was present in medium to small-sized arteries, which was equivalent to Arkin’s classification II-IV. Most of the arteries had fibrous intimal thickening, which was considered to obstruct the arteries and thus cause segmental intestinal necrosis. A diagnosis of polyarteritis nodosa (PAN) was made, and intravenous cyclophosphamide pulse therapy was added to the therapeutic regimen. This patient was successfully treated with these multidisciplinary therapies and his stoma was finally closed. This is a very rare and indicative case of PAN weakly positive for MPO-ANCA and clinically mimicking NOMI, which occurred even after treatment with pulsed methylprednisolone.

Core tip: We present a patient with polyarteritis nodosa (PAN) weakly positive for myeloperoxidase-anti-neutrophil cytoplasmic antibody and clinically mimicking nonocclusive mesenteric ischemia (NOMI), which occurred after treatment with pulsed methylprednisolone for mononeuritis multiplex. The present case is not only rare but also informative, because vasculitis in medium to small-sized arteries was shown to take a few months to develop tangible signs of visceral ischemia, which can occur even after treatment with pulsed methylprednisolone, and the imaging and surgical findings of intestinal necrosis caused by PAN may resemble those of NOMI.

Polyarteritis nodosa (PAN) is necrotizing arteritis of medium to small-sized arteries without glomerulonephritis or vasculitis in arterioles, capillaries, or venules[1]. PAN can show a wide variety of symptoms, including general symptoms, neurological manifestations, skin involvement, renal involvement, and gastrointestinal (GI) manifestations[2]. Clinically, the spectrum of GI manifestations is wide, ranging from mild transient abdominal pain to life-threatening complications requiring emergency surgery, e.g., peritonitis, bowel infarction, or hemorrhage[3]. Severe GI involvements, including bowel perforation, bleeding, and pancreatitis, are independent predictive factors for poor prognosis of PAN together with age[4]. Although GI ischemia has been reported to occur at a rate of 13%-31% in PAN patients[3,5], the prevalence of PAN itself is very low, and clinical suspicion of vasculitis is sometimes difficult in cases showing intestinal necrosis. Here, we describe a case in which a patient with PAN presented with segmental intestinal necrosis clinically mimicking nonocclusive mesenteric ischemia (NOMI) even after treatment with pulsed methylprednisolone for vasculitis.

A 74-year-old Japanese man was admitted to our hospital because of mononeuritis multiplex in the left ulnar and peroneal nerves on May 26, 2012. Two months previously, he had experienced systemic muscular pain. A tentative diagnosis of polymyalgia rheumatica was made and he was treated with prednisolone (PSL) at 10 mg/d. Although steroids were partially effective in improving the patient’s condition, the levels of C-reactive protein (CRP) continued to be high (18 mg/dL). He was referred to our hospital for further evaluation one month later, at which time he had no complaints other than muscular pain. His height was 172 cm and body weight was 62 kg; the patient’s body weight had decreased by 3 kg from the onset of the disease. Laboratory tests indicated leukocytosis, anemia, thrombocytosis, and elevated CRP levels. The results of urine tests were negative. The patient was negative for anti-nuclear antibody and proteinase 3 (PR3)-anti-neutrophil cytoplasmic antibody (ANCA), but weakly positive for myeloperoxidase (MPO)-ANCA (23.7 U/mL: normal range 0.0-8.9 U/mL). Tests for infections, including hepatitis B surface antigen and blood culture, were negative. Torso computed tomography (CT) revealed emphysema alone, and whole-body positron emission tomography yielded negative results. Although we recommended hospitalization for diagnosis and treatment, the patient refused for personal reasons. One week later, he noticed numbness in his left hand and leg. He then developed left foot drop, so underwent a medical examination and was admitted to our hospital. On admission, his consciousness was clear, performance status was 3, body temperature was 36.3 °C, and blood pressure was 178/124 mmHg. He had general muscle weakness and sensory loss in regions supplied by the left ulnar and peroneal nerves, and dorsiflexion of the left foot was compromised to manual muscle testing 2/5. Laboratory tests indicated elevated levels of CRP and muscular enzymes, such as creatine kinase (CK) (Table 1). Urinary analysis showed proteinuria and hematuria with a few casts. He received pulsed methylprednisolone at a dose of 1 g for 3 d followed with PSL at 60 mg/d because the underlying disease was considered to be vasculitis, and intravenous nicardipine for hypertension, which was considered to be caused by renal vascular involvement. Despite this therapy, the CRP level did not fall below 10 mg/dL and the CK level increased significantly to 9358 IU/L after 3 d of this treatment (Figure 1). At the same time, the patient complained of abdominal pain. His abdomen was flat and soft, and showed left lower quadrant pain without muscular defense or rebound. Abdominal X-ray showed a distended intestine, indicating paralytic ileus. CT revealed distended small bowel loops, gas in the small bowel, and blurred enhancement of the intestinal wall without any significant obstruction in the mesenteric arteries, suggesting NOMI (Figure 2A-C). Emergency surgery was performed on the same day. His jejunum to ileum showed segmental ischemia and necrosis over 2 m, and surgical findings were compatible with NOMI (Figure 2D). Small intestinal resection was performed and an intestinal fistula was made. Pathologically, necrotizing vasculitis with fibrinoid necrosis was present in medium to small-sized arteries, and most of the arteries had fibrous intimal thickening (Figure 3). There was no necrotizing vasculitis in arterioles, capillaries, or venules. Pathology was equivalent to Arkin’s classification II-IV[6], and a diagnosis of PAN was made. Intravenous cyclophosphamide (IVCY) pulse therapy at a dose of 500 mg/mo was added to the treatment regimen. Although various complications occurred, including deep vein thrombosis, stoma trouble, and disseminated varicella zoster virus infection, the patient recovered well and was transferred to a different hospital for rehabilitation. As his nutritional status had improved because he became able to eat a regular diet without supplemental nutrition, his stoma was closed in April 2013. He is now in complete remission with the dose of PSL tapered to 10 mg/d. 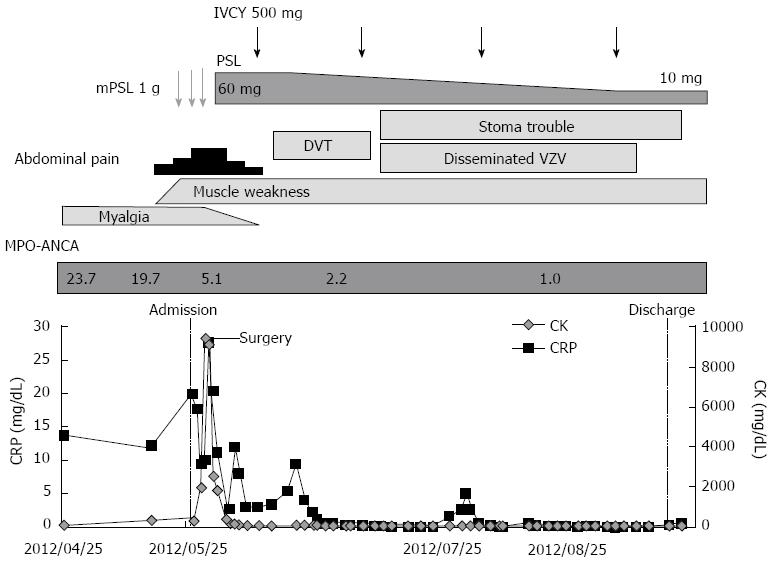 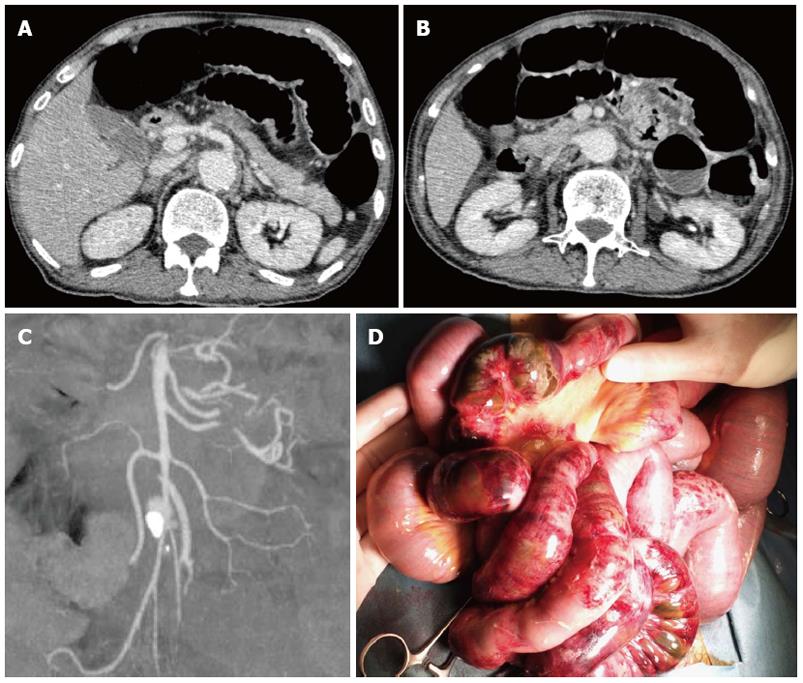 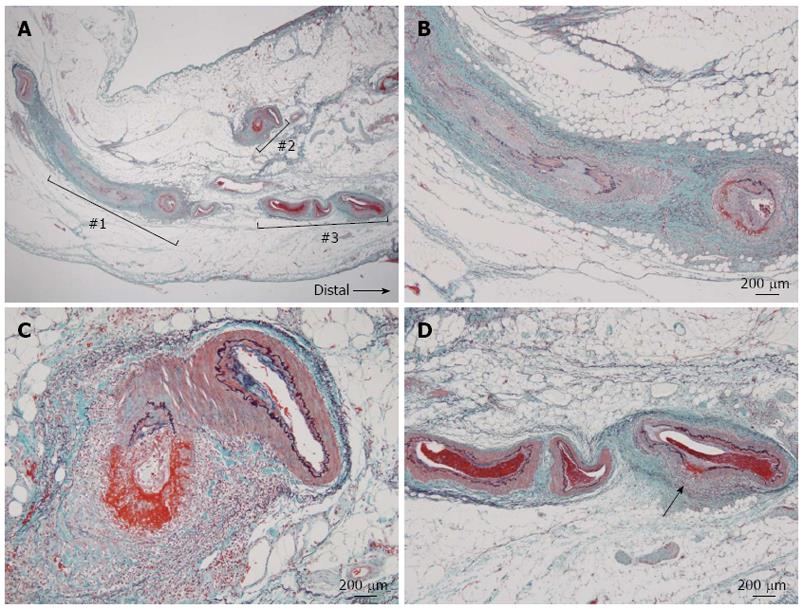 NOMI is an acute mesenteric circulatory disorder that is not caused by organic occlusion of blood vessels[7]. The typical patient is critically ill, with severe cardiac disease or sepsis[8]. With regard to pathogenesis, intestinal vasospasm due to persistent low perfusion is thought to cause ischemic disorder due to decreased cardiac output and blood pressure[9]. Mitsuyoshi et al[7] reported findings that may be useful as supplemental information in diagnosis of NOMI: (1) enhancement of principal arteries could be traced to the periphery close to the marginal arteries in CT slices; and (2) the staining intensity varied in the intestinal wall in the same slice (showing a difference between regions of the intestinal wall with good and poor blood flow). With regard to laparotomic characteristics, mesenteric blood flow may be retained, even in marginal arteries reaching the lesions, despite extensive necrotization throughout the intestine (noncontinuous segmental necrosis). This was reported to be a marked distinguishing feature from mesenteric thrombosis, in which the mesentery and intestine are necrotized from the site of the thrombus, forming a sphenoidal necrotic area in the region served by the artery (continuous necrosis)[7].

Although CT imaging and surgical findings were compatible with NOMI in this case, the underlying disease was considered to be vasculitis because this patient manifested general weakness, myalgia, and mononeuritis multiplex; clinically apparent mononeuritis multiplex can be a diagnostic or classification criterion for vasculitis affecting peripheral nerves without the need for a nerve biopsy to observe the vasculitis histologically[10]. In this case, necrotizing vasculitis with fibrinoid necrosis was pathologically present in medium to small-sized arteries, and fibrous intimal thickening was considered to obstruct these arteries and cause segmental intestinal necrosis. Although the pathology was equivalent to Arkin’s classification II-IV, most belonged to Arkin’s classification III-IV, indicating longstanding vasculitis. Therefore, it is reasonable to consider that the patient suffered from vasculitis from the beginning. Although he was treated with pulsed methylprednisolone before the onset of abdominal symptoms, fibrous intimal thickening of medium to small-sized intestinal arteries must have already occurred.

According to the Chapel Hill Consensus Conference 2012[10], PAN is defined as necrotizing arteritis of medium to small-sized arteries without glomerulonephritis or vasculitis in arterioles, capillaries, or venules, and is not associated with ANCA, which was based on the report that ANCA was typically absent in patients with PAN[11]. In this previous report by Guillevin et al[11], one patient (Table 1, No. 40) diagnosed with PAN had MPO-ANCA. Furthermore, there have been some reports presenting pathologically diagnosed PAN with MPO-ANCA positivity, all of which were reported from Japan[12-16]. The prevalence rates of ANCA and ANCA-associated vasculitis are different between Japan and Europe; microscopic polyangiitis (MPA) and MPO-ANCA are more common in Japan, while granulomatosis with polyangiitis and PR3-ANCA are more common in Europe[17,18]. These trends may be related to the reports of PAN with MPO-ANCA positivity in Japan.

Although MPO-ANCA was also weakly positive in this case, this patient clearly fulfilled the American College of Rheumatology 1990 criteria for classification of PAN[19], the pathological findings were typical of PAN as shown in Figure 3, and vasculitis was absent in arterioles, capillaries, and venules. Therefore, a diagnosis of PAN was made in this case. Tanaka et al[14] described a case of PAN with MPO-ANCA and vasculitis in mesenteric medium-sized arteries, which was confirmed by autopsy. In their case, the titer of MPO-ANCA was low and was not correlated with the severity of PAN. These points were similar to our case, and we speculated that the epitope and pathogenicity may be different from those of MPO-ANCA found in MPA. Peripheral nervous system vasculitis, hypertension, cutaneous lesions, and myalgias were reported to be more common in PAN with than without GI involvement[5], and our patient also manifested most of these symptoms with the exception of cutaneous lesions.

The standard regimen for PAN, not related to hepatitis B virus infection, is based on a combination of corticosteroids (CS) and CY[20]. The addition of CY to CS particularly benefits patients presenting with factors associated with poor prognosis, such as GI involvement. Intermittent pulse-therapy may be as efficacious as oral CY for inducing remission, while generating fewer side effects. Treating PAN patients positive for factors associated with poor prognosis with 12 rather than 6 CY pulses significantly decreased the relapse rate and significantly increased the probability of event-free survival[20]. Plasma exchange can be prescribed for severe life-threatening PAN as combined rescue therapy, although trials have not proven its benefits when prescribed systematically for all patients with PAN[21].

In conclusion, vasculitis in medium to small-sized arteries takes a few months to show tangible signs of visceral ischemia, and the CT and surgical findings of intestinal necrosis caused by PAN may resemble those of NOMI. Clinical awareness of vasculitis and ANCA measurement (never exclusive) are important in managing patients showing segmental intestinal necrosis.

We thank the staff of the Department of Hematology and Rheumatology, Tohoku University, for help and discussion.