METHODS: Two publicly available human exon arrays for gastric cancer and data for the corresponding normal tissue were downloaded from the Gene Expression Omnibus (GEO). We re-annotated the probes of the human exon arrays and retained the probes uniquely mapping to lncRNAs at the gene level. LncRNA expression profiles were generated by using robust multi-array average method in affymetrix power tools. The normalized data were then analyzed with a Bioconductor package linear models for microarray data and genes with adjusted P-values below 0.01 were considered differentially expressed. An independent data set was used to validate the results.

RESULTS: With the computational pipeline established to re-annotate over 6.5 million probes of the Affymetrix Human Exon 1.0 ST array, we identified 136053 probes uniquely mapping to lncRNAs at the gene level. These probes correspond to 9294 lncRNAs, covering nearly 76% of the GENCODE lncRNA data set. By analyzing GSE27342 consisting of 80 paired gastric cancer and normal adjacent tissue samples, we identified 88 lncRNAs that were differentially expressed in gastric cancer, some of which have been reported to play a role in cancer, such as LINC00152, taurine upregulated 1, urothelial cancer associated 1, Pvt1 oncogene, small nucleolar RNA host gene 1 and LINC00261. In the validation data set GSE33335, 59% of these differentially expressed lncRNAs showed significant expression changes (adjusted P-value < 0.01) with the same direction.

CONCLUSION: We identified a set of lncRNAs differentially expressed in gastric cancer, providing useful information for discovery of new biomarkers and therapeutic targets in gastric cancer.

Core tip: Long non-coding RNAs (lncRNAs) have risen to prominence with important roles in a broad range of biological processes. LncRNA expression patterns and their biological functions in gastric cancer still remain unknown. We re-annotated the probes from an Affymetrix Human Exon 1.0 ST array and identified probes uniquely mapping to lncRNAs at the gene level. These probes correspond to 9294 lncRNAs, covering nearly 76% of the GENCODE lncRNA data set. We identified a set of lncRNAs that were differentially expressed in gastric cancer. In an independent data set, 59% of these differentially expressed lncRNAs showed significant expression changes with the same direction.

Over the last decade, advances in genome-wide analysis of gene expression have revealed far more genomic transcription than previously anticipated, with the majority of the genome being transcribed into non-coding RNAs (ncRNAs)[1,2]. Much attention has focused on microRNAs (miRNAs), one class of small non-coding RNAs. MiRNAs are involved in specific regulation of both protein-coding and putatively non-coding genes by post-transcriptional silencing or infrequently by activation[3-5].

More recently, long non-coding RNAs (lncRNAs), generally defined as having a size greater than 200 nucleotides, have risen to prominence with important roles in a broad range of biological processes. LncRNAs regulate gene expression at the level of post-transcriptional processing such as protein synthesis, RNA maturation, and transport. They also exert their effects in transcriptional gene silencing through the regulation of chromatin structure[6,7]. Dysregulation of lncRNAs is associated with many human diseases, including various types of cancers[8]. The well-studied lncRNA HOTAIR, for example, was found to be highly upregulated in both primary and metastatic breast tumors, and its expression level in primary tumors was a powerful predictor of eventual metastasis and death[9]. However, lncRNA expression patterns and their biological function in gastric cancer remain unknown.

In this study, we identified a set of lncRNAs that were differentially expressed in gastric cancer by analyzing publicly available data sets from the gene expression omnibus (GEO).

A new PGF file covering the re-annotated probe-lncRNA relationships was created. The official CLF file HuEx-1_0-st-v2.r2.clf was downloaded from the Affymetrix website (http://www.affymetrix.com/Auth/support/downloads/library_files/HuEx-1_0-st-v2.r2.zip).

A computational pipeline was established to re-annotate over 6.5 million probes of the Affymetrix Human Exon 1.0 ST array (Figure 1). There were 315255 probes perfectly matched to non-coding RNAs but not to any protein-coding transcript. These probes were mapped from transcript level to gene level and 278918 probes matched to one gene were retained. Probes mapping to short ncRNAs and pseudogenes were then discarded, leaving 136,533 probes mapping to lncRNAs, which were annotated with Ensembl (processed_transcript, lincRNA, antisense, non_coding, sense_intronic, ncrna_host, sense_overlapping and 3prime_overlapping_ncrna). To further increase accuracy, genes matched by less than three probes were discarded. Finally, we obtained 136053 probes uniquely mapping to lncRNAs at the gene level, corresponding to 9294 lncRNAs. The number of probes mapping to lncRNAs ranged from 3 to 257 and the average was 18. 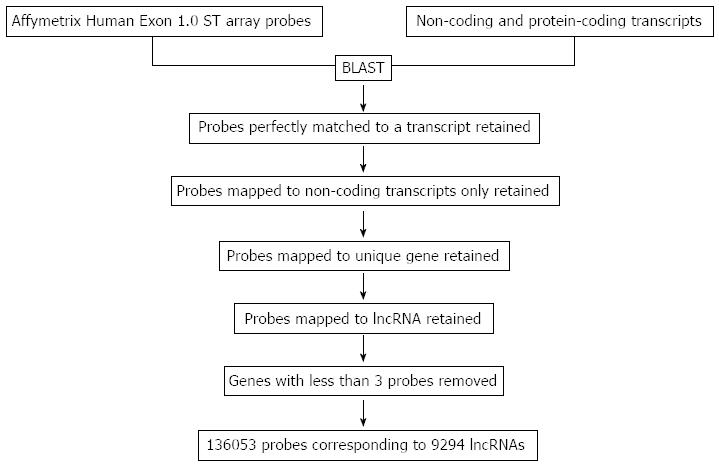 The CEL files were processed by Affymetrix Power Tools for background correction, normalization, and summarizations with RMA algorithm. Using LIMMA with an adjusted P-value of less than 0.01 as a threshold, we identified 88 lncRNAs that were differentially expressed in gastric cancer as compared to normal gastric tissue (Figure 2). The top 30 lncRNAs differentially expressed in gastric cancer are listed in Table 1. Of 88 differentially expressed lncRNAs, 71 lncRNAs were found to be upregulated and 17 to be downregulated. Most of these lncRNAs do not have an official Human Genome Nomenclature Committee symbol and their function is unknown. But some have been reported to play a role in cancer, including LINC00152[21], taurine upregulated 1 (TUG1)[22], urothelial cancer associated 1 (UCA1)[23,24], Pvt1 oncogene (PVT1)[25], small nucleolar RNA host gene 1 (SNHG1)[26], and LINC00261[27]. 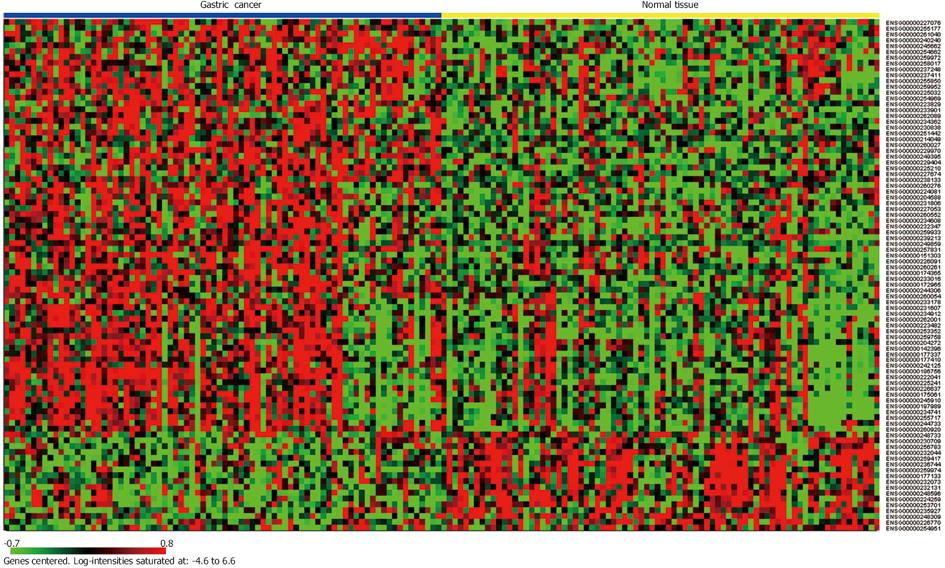 To independently validate our results, we conducted the same analysis on GSE33335 and found that 59% of the differentially expressed lncRNAs identified by above analysis showed significant expression changes (adjusted P < 0.01) with the same direction. As shown in Figure 3, the distribution of expression differentials between the experimental data set and the validation data set is significantly concordant, reflecting a high consistence in expression patterns of these genes among different sample sets. 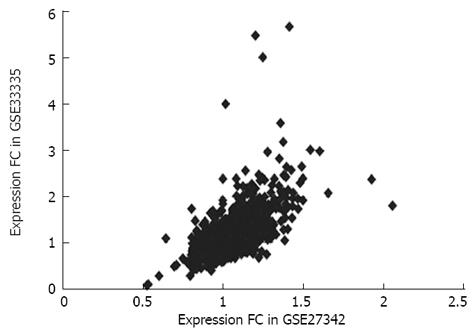 LncRNAs have comprehensive functions in biological processes through various mechanisms[6,7]. The expression patterns of lncRNAs are of great importance in the cancer field and are often investigated with tiling arrays[28,29], RNA sequencing[30] or lncRNA-specific microarrays[31,32], which are relatively expensive and inflexible. Recently, studies have suggested that lncRNA expression profiling may be achieved by mining existing microarray data because some probes uniquely mapping to lncRNAs are fortuitously represented on these arrays[33,34]. The Affymetrix Human Exon 1.0 ST array consists of over 6.5 million individual probes designed along the entire length of the gene as opposed to just the 3’ end, providing a unique platform for mining lncRNA profiles[35,36].

The lncRNA list used in this study was retrieved from Ensembl and is equivalent to the GENCODE lncRNA data set. This data set utilizes a combination of manual curation, computational analysis and targeted experimental approaches, and is the largest catalog of human lncRNAs to date[22]. To filter out potentially unrecognized probes mapping to protein-coding genes, we generated a merged known protein-coding gene list from RefSeq, UCSC and Ensembl. Still, some probes could potentially hybridize to other undiscovered transcripts or genes.

We identified 136053 probes from the Affymetrix Human Exon 1.0 ST array uniquely mapping to lncRNAs at the gene level. These probes correspond to 9294 lncRNAs, covering nearly 76% of the GENCODE lncRNA data set. This analysis revealed a set of lncRNAs that were differentially expressed between gastric cancer and normal gastric tissue, some of which have been previously reported in human cancers. For example, TUG1 is upregulated in bladder urothelial carcinoma and high TUG1 expression levels were associated with high grade and stage carcinomas[22]. Knockdown of TUG1 induced cell proliferation inhibition and apoptosis. Another candidate, UCA1, is dramatically upregulated in bladder cancer, suggesting it may be a very sensitive marker for bladder cancer[23]. Exogenous expression of UCA1 enhanced tumorigenicity, invasive potential, and drug resistance in BLS-211 cells[24]. Also, PVT1, located in 8q24 and amplified and overexpressed in ovarian and breast cancer, increases cell proliferation and inhibits apoptosis[25]. In light of published results in other cancers, we hypothesize that these lncRNAs may play an important role in the development of gastric cancer and are potential candidates for new biomarkers and therapeutic targets in gastric cancer.

Recently, H19 was shown to be upregulated in gastric cancer and its overexpression contributes to proliferation of gastric cancer cells[37]. In our study, the fold change of H19 in gastric cancer versus normal tissue is 1.378 with an adjusted P-value of 0.043. Though the difference was not statistically significant with our threshold (an adjusted P-value less than 0.001), the trend is consistent with the early report. However, our analysis may miss some lncRNAs that other groups have demonstrated to be involved in the development of gastric cancer due to the different distributions of the patient populations in terms of age, gender and cancer subtype and stage. We are also interested in exploring which lncRNAs are differentially expressed in different stages of gastric cancer. Unfortunately, the majority of gastric cancer samples in GSE27342 are stage III (54/72), making it is challenging to identify differentially expressed lncRNAs based on the stage of disease.

Long non-coding RNAs (lncRNAs) are an important class of regulatory transcripts involved in a variety of biological functions. While they are aberrantly expressed in many types of cancers, their expression patterns and biological functions in gastric cancer remain unknown.

The authors re-annotated the probes of the Affymetrix Human Exon 1.0 ST array and identified probes uniquely mapping to lncRNAs at the gene level. By analyzing a publicly available data set, a set of lncRNAs differentially expressed in gastric cancer were identified.

The study results suggest lncRNAs play an important role in the development of gastric cancer and have the potential to be used as molecular diagnostic markers and therapeutic targets in gastric cancer.