AIM: To assess CD163 expression in plasma and peripheral blood and analyze its association with disease in acute-on-chronic hepatitis B liver failure (ACHBLF) patients.

CONCLUSION: CD163 and sCD163 may be related to disease severity and prognosis in ACHBLF patients.

Hepatitis B virus (HBV) infection is a major health problem worldwide. It is thought to be one of the main causes of liver-related chronic and acute diseases[1]. With severe acute exacerbation of the disease, some chronic hepatitis B (CHB) patients may progress to liver failure. We define this progression as acute-on-chronic hepatitis B liver failure (ACHBLF), and constitutes about 70% of all acute-on-chronic liver failure in areas with a high incidence of hepatitis B[2]. ACHBLF has an extremely poor prognosis due to a lack of understanding of its pathogenesis. Currently, clinical observations have shown that ACHBLF may be related to strong immune responses. Therefore, it is important to fully understand the course of the immune pathogenesis of ACHBLF. If we can identify efficient markers which predict disease progression, this may be of great help in the treatment of ACHBLF[3] .

Innate immune cells such as macrophages can be activated by acute and chronic inflammation and produce various cytokines. These immunological cytokines induce and cause liver tissue injury. Activated macrophages play important roles in the production of these immune cytokines. Monocytes and macrophages can be activated into M1 and M2 subpopulations in response to different environmental signals which are mainly derived from inflammatory diseases. Those of the M2 subpopulation inhibit the inflammatory state[4-6].

CD163 is a member of a scavenger receptor family and is expressed mainly on activated macrophages. It is a specific M2 macrophage marker. Soluble CD163 (sCD163) emerges from the shedding of CD163 from the cell surface in the plasma[6-9]. It is now evident that sCD163 and CD163 are very useful as biomarkers of macrophage activation in various inflammatory diseases. It is strongly indicated that CD163 and sCD163 may be involved in the pathogenesis of liver failure. However, the exact expression of CD163 and sCD163 in ACHBLF patients has not been fully elucidated[10,11].

This study aimed to evaluate peripheral blood CD163 and plasma sCD163 expression in macrophages from patients with ACHBLF.

Forty patients with ACHBLF, 40 patients with CHB and 20 healthy controls from Qilu Hospital of Shandong University, were included in this retrospectively study.

Blood samples collected from January 2011 to January 2012 at the Department of Hepatology, Qilu Hospital of Shandong University, were separated into plasma and stored at -70 °C until use.

Patients with CHB had more than twice the normal alanine aminotransferase level. All groups were matched for sex and age. ACHBLF patients had a history of CHB, with plasma total bilirubin (TBIL ≥ 85 μmol/L), prothrombin activity (PTA) < 40%, and complications such as hepatic encephalopathy (no less than grade II), ascites or hepato-renal syndrome. According to the Asian Pacific Association for the Study of the Liver guideline, all ACHBLF patients received inpatient treatment. We excluded patients who underwent liver transplantation, had hepatocellular carcinoma or other metastatic liver tumors or who had received immunotherapy or anti-viral treatment within 6 mo. Patients with a history of alcohol abuse, intravenous drug abuse, pregnancy, concomitant chronic hepatitis C, human immune deficiency virus infection or autoimmune hepatitis were also excluded. Hepatitis B surface antigen in healthy controls (n = 20) (age-, sex- and race-matched) was negative. Experiments and procedures were conducted with the guidance of the Helsinki Declaration of 1975[12]. The study was approved by the local Ethical Committee of Qilu Hospital of Shandong University. Prior to the collection of blood, informed consent was obtained from each patient. The characteristics of the enrolled subjects are summarized in Table 1.

Six milliliters of peripheral venous blood were collected from each subject and Ficoll-Paque Plus (GE Healthcare, Uppsala, Sweden) was used for isolation of PBMCs. Total RNA in PBMCs was extracted using Trizol (Invitrogen, Carlsbad, CA, United States) according to the manufacturer’s instructions. Two micrograms of total RNA were converted into cDNAs using the RevertAid™ First Strand cDNA Synthesis Kit (Fermentas, Lithuania) and real-time polymerase chain reaction (RT-PCR) was carried out on a Lightcycler (Roche Diagnostics, Germany). RT-PCR amplification mixtures (20 μL) contained 75 ng template cDNA, 10 μL 2 9 SYBR@ Premix Ex Taq™ (Takara, Japan) and 200 nmol/L forward and reverse primer. The real-time PCR reaction was performed as follows: the initial step was 95 °C for 30 s, followed by 40 cycles at 95 °C for 5 s, 60 °C for 30 s and 72 °C for 30 s. β-actin was used as the endogenous control for the normalization of RNA quantity and quality differences in all samples. 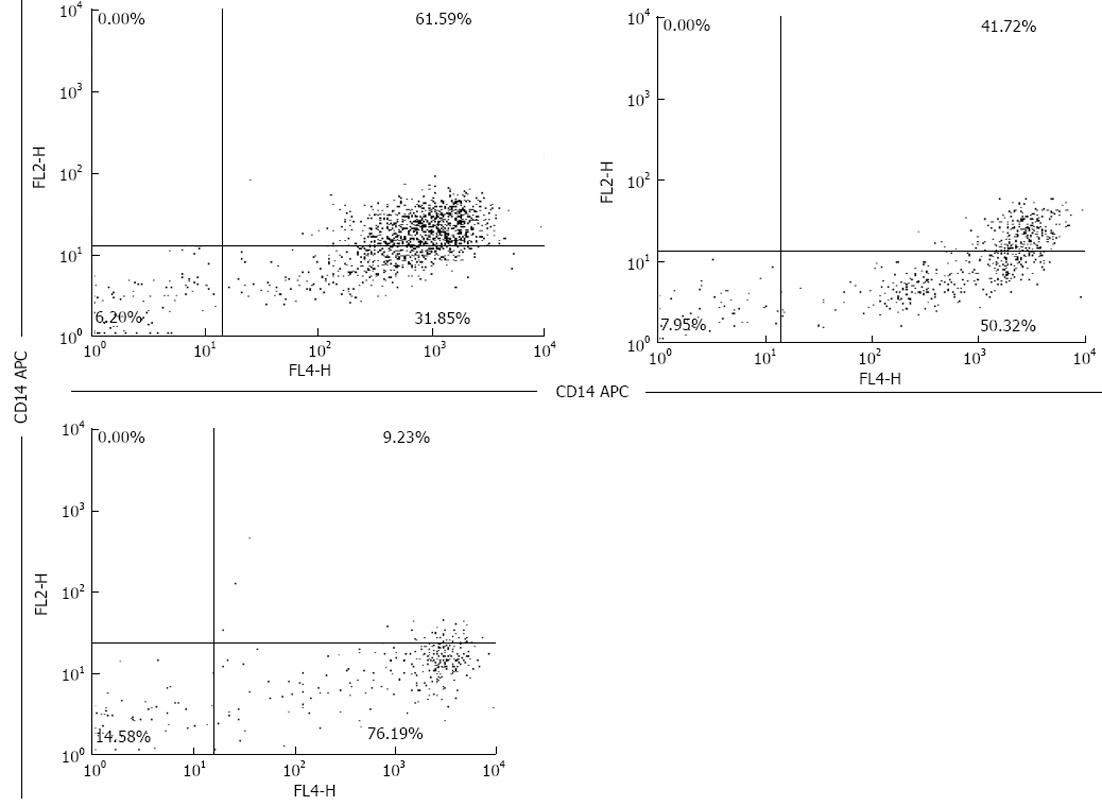 SCD163 was determined by enzyme-linked immunosorbent assay (ELISA) according to the manufacturer’s instructions (R and D, Minneapolis, MN, United States). All samples were analyzed in duplicate following the manufacturer’s protocol. The sensitivity of the assay was 0.1 ng/mL, and the intra-assay and inter-assay coefficients of variation were less than 3% and 6%, respectively. 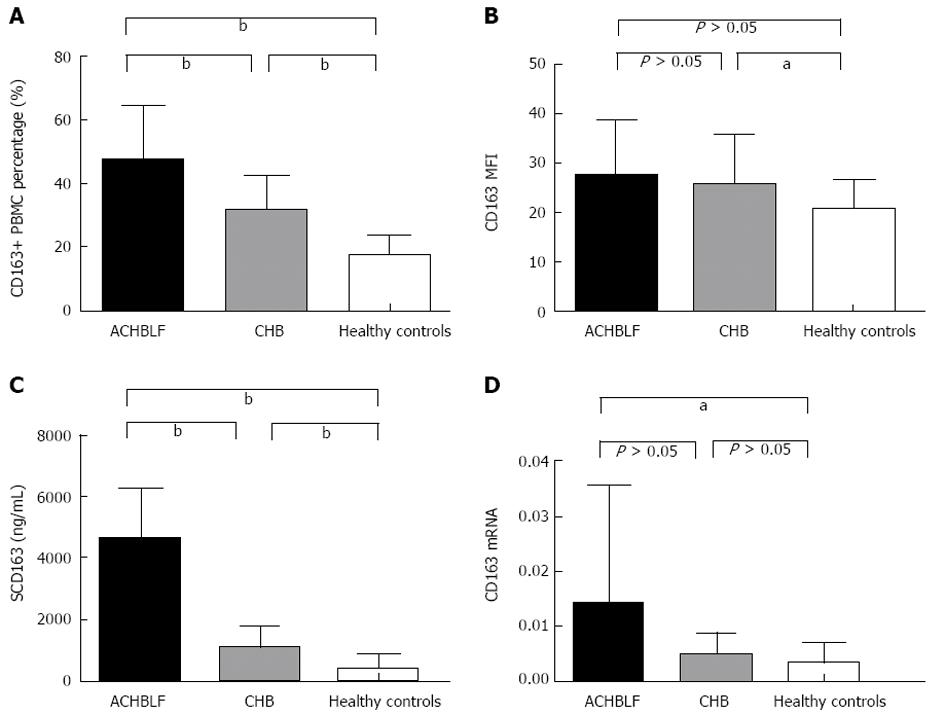 Increased mRNA expression of CD163 in PBMCs from ACHBLF patients 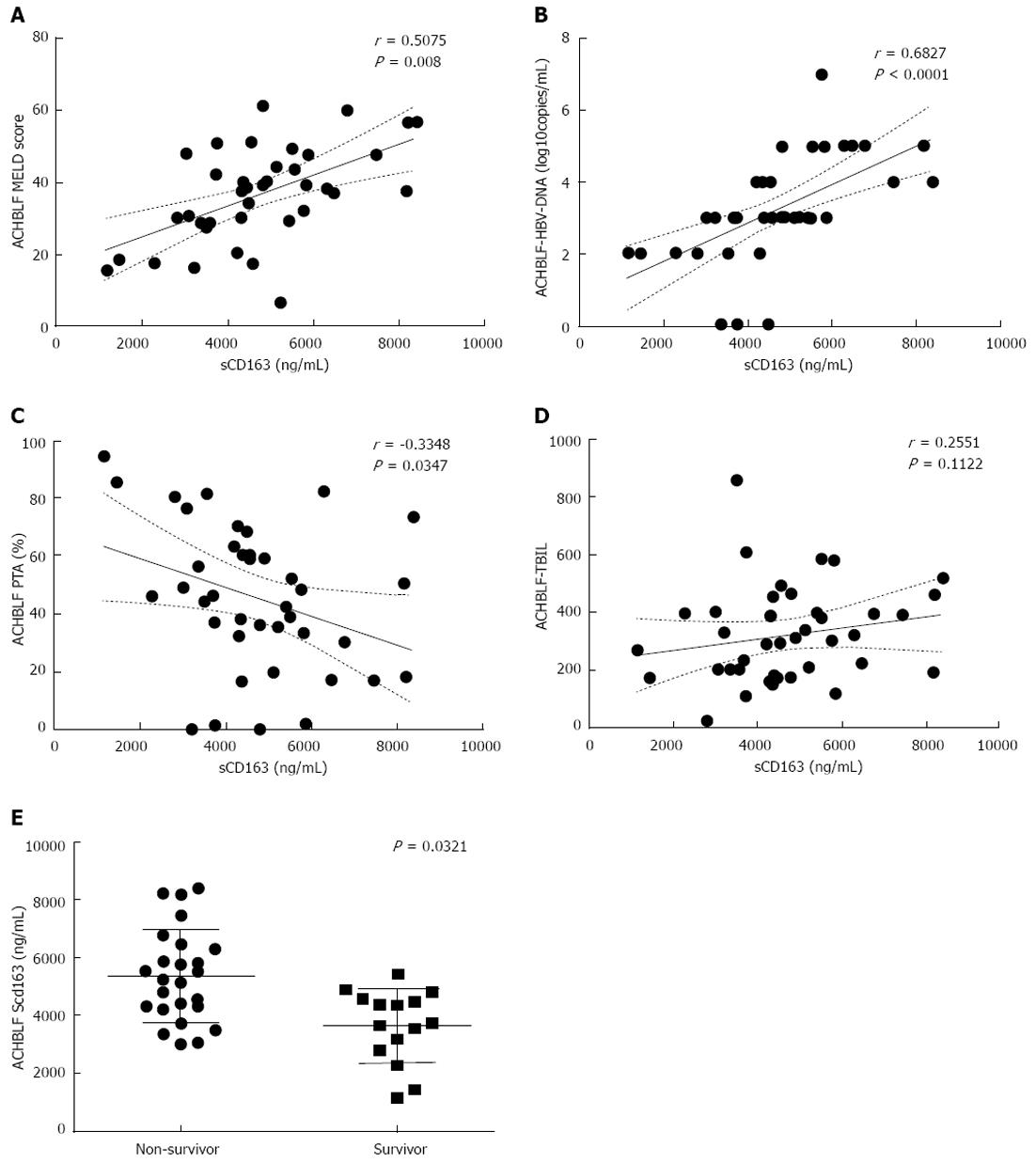 Although sCD163 is thought to play an important role in the pathogenesis of liver failure, this is the first study on the frequency of CD163+ PBMCs and CD163 mRNA level in ACHBLF patients[18,19]. Increased plasma sCD163 levels were correlated with disease severity in ACHBLF patients. These results strongly suggest that the role of CD163 in the immune response might affect the prognosis of ACHBLF.

CD163 is a scavenger receptor, and its expression has been proved to be associated with inhibition of inflammation. Furthermore, during the innate immune response, CD163 plays an important role in the host defense against inflammation[5,20,21]. The soluble form of CD163 is also a biomarker associated with inflammation[18]. In the present study, we first found that the frequency of CD163+ PBMCs and CD163 mRNA expression in PBMCs were dramatically increased in ACHBLF patients compared with healthy controls. These results could be interpreted together with previous reports to suggest that CD163 might have a key position in the immunolesion of ACHBLF.

There were no significant differences in MFI of CD163+ PBMCs within the three groups. This result is very interesting. From previous literature, which mainly included randomly selected patients, CD163 was inversely correlated with sCD163 plasma levels[22]. Lipopolysaccharide and other pro-inflammatory cytokines induce shedding of CD163 from the surface of isolated monocytes. During infection, the expression of monocyte surface CD163 decreases. In contrast, some studies have shown that with chronic and acute inflammation, the expression of surface CD163 increased. Through CD163 shedding, decreased surface CD163 was followed by recovery and induction of surface CD163 to higher levels[23-25]. We speculate that surface CD163 expression might vary according to different inflammatory states in patients and different stages of inflammation. More research is needed to confirm this.

The present study has limitations, and it would be very interesting to determine the dynamic and histologic expression of CD163 in a future study.

In conclusion, our study demonstrated three major findings. First, the population of CD163+ PBMCs was significantly greater in ACHBLF patients than in CHB patients and healthy controls. Second, CD163 mRNA expression in ACHBLF patients was significantly increased compared with CHB patients and healthy controls. Third, plasma sCD163 levels were markedly increased and correlated with disease severity and prognosis in ACHBLF patients. Our findings indicate that CD163 and sCD163 may serve as useful biomarkers and new therapeutic targets for ACHBLF.

This is the first study on the frequency of CD163+ peripheral blood mononuclear cells and CD163 mRNA level in ACHBLF patients. Authors found that increased plasma soluble CD163 (sCD163) levels were correlated with disease severity in ACHBLF patients. These findings strongly suggest that the role of CD163 and sCD163 in the immune response might affect the prognosis of ACHBLF.

Their findings indicate that CD163 and sCD163 may serve as useful biomarkers and new therapeutic targets for ACHBLF. These biomarkers should be determined as early as possible in ACHBLF patients.

ACLF was first used in 1995 to describe a rapid deterioration of liver function due to acute insult to the liver in patients with ongoing or chronic liver disease. Diagnosis of ACLF may be based on the following: acute hepatic insult manifesting as jaundice (serum bilirubin ≥ 85 μmol/L and coagulopathy international normalized ratio > 1.5 or prothrombin activity < 40%) complicated within 4 wk by ascites and/or encephalopathy in a patient with previously diagnosed or undiagnosed chronic liver disease. ACHBLF is ACLF with acute or chronic hepatitis B.

Overall, this paper is of a very good quality. Study design is appropriate and clear, and helps to answer a clinical relevant question. Data analysis is sufficient. Manuscript is well structured, language is of sufficient quality.