AIM: To revealed the prevalence of Helicobacter pylori (H. pylori) infection in the Bhutanese population.

CONCLUSION: The high incidence of gastric cancer in Bhutan may be attributed to the high prevalence of H. pylori infection.

We recruited a total of 372 volunteers with dyspeptic symptoms (214 females and 158 males; mean age of 39.6 ± 14.9 years) during four days (December 6 to 9) in December 2010. The survey was conducted in Thimphu (n = 194), the capital city, and in two other cities within a 200 km radius of the capital, Punakha (n = 119) and Wangdue (n = 59) (Figure 1). Written informed consent was obtained from all participants, and the protocol was approved by the Ethics Committee of Jigme Dorji Wangchuk National Referral Hospital, Bhutan.

During each endoscopy session, four gastric biopsy specimens were obtained (three from the antrum and one from the corpus). The three specimens from the antrum were used for H. pylori culture, rapid urease test and histological examination. The specimen from the corpus was used for histological examination. Peptic ulcers and gastric cancer were identified by endoscopy, and gastric cancer was further confirmed by histopathology. Gastritis was defined as H. pylori gastritis in the absence of a peptic ulcer or gastric malignancy.

To maximize the diagnostic accuracy, 5 different methods were combined for the diagnosis of H. pylori infection, including culture, histology, immunohistochemistry (IHC), the rapid urease test and serum H. pylori antibody. For the H. pylori culture, one biopsy specimen from the antrum was homogenized in saline and inoculated onto Mueller Hinton II Agar medium (Becton Dickinson, NJ, United States) supplemented with 7% horse blood without antibiotics. The plates were incubated for up to 10 d at 37 °C under microaerophilic conditions (10% O2, 5% CO2 and 85% N2). H. pylori was identified on the basis of colony morphology, Gram staining and positive reactions for oxidase, catalase, and urease. Isolated strains were stored at -80 °C in Brucella Broth (Difco, NJ, United States) containing 10% dimethylsulfoxide and 10% horse serum. For histology, all biopsy materials were fixed in 10% buffered formalin for 24 h and then embedded in paraffin. Serial sections were stained with hematoxylin and eosin and with May-Giemsa stain. The state of the gastric mucosa was evaluated according to the updated Sydney system[11]. The degree of the bacterial load was classified into four grades: 0, “normal”; 1, “mild”; 2, “moderate”; and 3, “marked”. A bacterial load grade greater than or equal to 1 was defined as H. pylori positive. H. pylori seropositivity was evaluated with a commercially available ELISA kit (Eiken Co., Ltd., Tokyo, Japan) according to the manufacturer’s instructions. Patients were considered to be H. pylori-negative when all five tests were negative, and a H. pylori-positive status required at least one positive test result.

IHC was performed as described previously[12]. Briefly, after antigen retrieval and inactivation of endogenous peroxidase activity, tissue sections were incubated with the α-H. pylori Ab (DAKO, Denmark) overnight at 4 °C. After washing, the sections were incubated with biotinylated goat anti-rabbit IgG (Nichirei Co., Japan), followed by incubation with a solution of avidin-conjugated horseradish peroxidase (Vectastain Elite ABC kit; Vector Laboratories Inc., Burlingame, CA, United States). Peroxidase activity was detected using a H2O2/diaminobenzidine substrate solution. For all cases, we performed Giemsa staining using a serial section to identify the presence of H. pylori. If the H. pylori identified by Giemsa staining was found to be positively immunostained, we judged the case to be positive.

The statistical analysis were conducted using the chi-square test to compare discrete variables and Cochran-Armitage analysis to compare the prevalence of H. pylori infection. Differences in the prevalence in each group were analyzed using the Mantel-Haenszel method. To match age and sex, multiple backward stepwise logistic regression analyses were used to examine the associations of peptic ulcers with the main predictor variables. The predictor variables for peptic ulcers were age, sex and H. pylori status. For each variable, the OR and 95%CI were calculated. Differences at P < 0.05 were regarded as statistically significant. The data analysis was performed using JMP® 9 statistical software (SAS Institute Inc., Cary, NC, United States) and SPSS version 19 (SPSS Inc., Chicago, IL, United States). 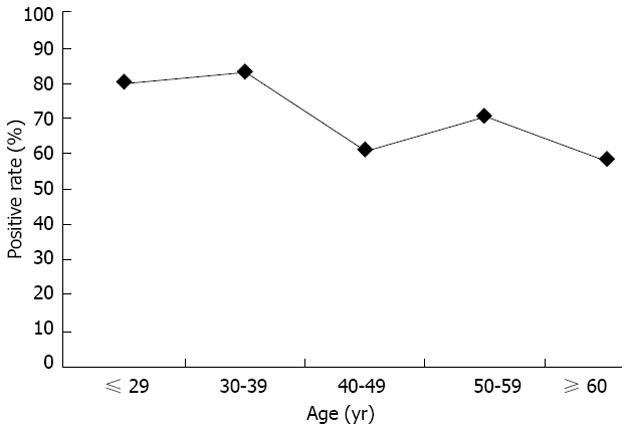 In the endoscopic diagnosis, gastritis was the most common finding (307/372, 82.5%). Gastric and duodenal ulcers were found in 25 (6.7%) and 22 (5.9%) cases, respectively. Gastric cancer was found in 5 cases (1.3%). Duodenal erosion, duodenal tumor, and reflux esophagitis were found at 5, 1 and 7 cases, respectively. Table 2 shows the prevalence H. pylori infection in each diagnosis. A high infection rate was detected among patients with gastric ulcers (92.0%) and duodenal ulcers (90.9%). In addition, 71.3% of the subjects with gastritis were H. pylori-positive. When gastric and duodenal ulcers were defined as peptic ulcers, the prevalence of H. pylori infection in peptic ulcers was significantly higher than that in gastritis (91.4% vs 71.3%, P = 0.003). The percentage of men was also significantly higher in patients with peptic ulcers than in those with gastritis (72.3% vs 37.1%, P < 0.001). Multiple logistic analysis after adjusting for age and gender showed that H. pylori-positivity in addition to male gender was significantly associated with peptic ulcers (OR = 3.89, 95%CI: 1.33-11.33).

Several clinical tests have been developed to diagnose H. pylori infection. However, there is still no established “gold standard” for the diagnosis of H. pylori, and thus the combination of two or more tests should be applied to determine the accurate prevalence of infection. In this study, we combined 5 different tests and considered H. pylori-positivity to be at least one positive test among the five tests. In this study, the serological test showed the highest positive rate compared with the other 4 tests. Although the serological test is widely used in epidemiological studies and not affected by local changes in the stomach that could lead to false-negatives, as in the other tests, this test cannot distinguish between current and past infections because H. pylori IgGs persist even after the disappearance of this bacterium[9,14]. Therefore, results that are positive in the serological test and negative in the endoscopic tests may indicate a past infection. Culture from biopsy specimens has the potential of leading to a high sensitivity, given that only one bacterium can multiply and provide billions of bacteria. However, both strict transport conditions and careful handling in the laboratory are necessary[14]. Histopathological positivity depends on the density of H. pylori biopsy sites; thus, these tests can occasionally show false negative results[14]. In addition, the histological diagnosis of H. pylori infection is very much dependent on the expertise of the pathologists. The rapid urease test, such as the CLO test, can be useful as a rapid diagnostic method. However, these results can also be affected by the bacterial load[14]. A high proportion of the elderly population develops gastric atrophy and intestinal metaplasia, which can lead to a hostile environment for H. pylori and thus fewer bacteria and potentially a negative result. A detailed study in histological scoring is necessary for further study. Moreover, endoscopic tests, including the CLO test, culture and histological examination, can be affected in bleeding patients with peptic ulcers[10]. However, although the reason is not clear, all peptic ulcer cases in our study were not in the active bleeding phase, indicating that we do not need to consider any effects of bleeding.

We thank Kudo Y, Yano K and Chaithongrat S for their technical assistance.

Bhutan is a small landlocked country in South Asia and the prevalence of Helicobacter pylori (H. pylori) infection in Bhutan has not been investigated.

This is the first study exploring the extremely high prevalence of H. pylori infection in Bhutan. Many tests for H. pylori detection such as serological test rapid urease test, culture, histology and immunohistochemistry were performed and analyzed.

The study results suggest that high incidence of gastric cancer and peptic ulcer disease in Bhutan may be attributed to the high prevalence of H. pylori infection. Therefore, H. pylori eradication therapy can contribute to reduce these H. pylori-related diseases.

This is a study in which authors analyzed the prevalence of H. pylori infection in different cities, age group and each disease. The results are very interesting and suggest that H. pylori eradication and improve of sanitation should be considered to reduce H. pylori infection and related diseases in Bhutan.