Ulcerative colitis (UC) is a chronic inflammatory bowel disease that may become intractable when treated with conventional medications such as aminosalicylates, corticosteroids, and azathioprine. The herbal medicine Qing Dai has traditionally been used in Chinese medicine to treat UC patients, but there is a lack of published data on the efficacy of Qing Dai in UC treatment. We report several cases of patients with intractable UC who take Qing Dai in a retrospective observational study. Furthermore, we explore the mechanisms of action of Qing Dai. Nine patients with active UC who received conventional medications but wished to receive Qing Dai as an alternative medication were included in our analysis. The UC severity level was determined based on the clinical activity index (CAI). Additionally, 5 of the 9 patients were endoscopically evaluated according to the Matts grading system. Each patient received 2 g/d of Qing Dai orally and continued taking other medications for UC as prescribed. Electron spin resonance was applied to explore the mechanisms of action of Qing Dai. After 4 mo of treatment with Qing Dai, the CAI score decreased from 8.3 ± 2.4 to 2.4 ± 3.4 (mean ± SD; P < 0.001). Similarly, the endoscopic Matts grade decreased from 3.4 ± 0.5 to 2.2 ± 0.8 (P = 0.02). Six of 7 patients who were on prednisolone upon enrollment in the study were able to discontinue this corticosteroid. Electron spin resonance revealed that Qing Dai possesses strong hydroxyl radical scavenging activity. Qing Dai showed significant clinical and endoscopic efficacy in patients who failed to respond to conventional medications. Scavenging of hydroxyl radicals appears to be a potential mechanism through which Qing Dai acts, but the significance of the scavenging ability of Qing Dai with respect to the anti-inflammatory effect in UC patients warrants further investigation.

The prevalence of ulcerative colitis (UC) is increasing worldwide and has reached a total of 130000 cases in Japan. Clinical practice guidelines issued by the Japanese Ministry of Health, Labor and Welfare recommend aminosalicylates, sulfasalazine, or 5-aminosalicylic acid (5-ASA) followed by corticosteroids [prednisolone (PSL)] or azathioprine (AZA) as the standard treatment for UC patients. Recently, infliximab (IFX) and tacrolimus have become available and are used clinically as novel medications for patients with UC. However, some patients do not respond to these pharmacological interventions; UC in such patients is called refractory or intractable. The herbal medicine Qing Dai is also known as Indigo naturalis and is extracted from plants such as Strobilanthes cusia and Isatis tinctoria. Qing Dai contains natural ingredients such as indigo, indirubin, isoindigotin, and nimbosterol. In China, Qing Dai has been traditionally used as an antipyretic, an antiphlogistic, and as a hemostatic remedy. Qing Dai enemas have been used for ulcerative proctitis and are currently described in Chinese medical guidelines for the treatment of UC. However, until now, no report has been published describing the efficacy of orally administered Qing Dai in UC patients.

Nine UC patients (7 men and 2 women, listed in Table 1) who voluntarily received Qing Dai between 2008 and 2011 were retrospectively evaluated. Patients who did not respond to 5-ASA and PSL or IFX were defined as “intractable”. One patient who was not intractable but refused to add PSL or IFX was included in the analysis. The average age of the patients was 34 years with a range of 16-75 years. All patients purchased Qing Dai from Seishinshoyakudo (Tokyo, Japan), a company that imports Qing Dai from China and sells it at a price of 4200 Japanese yen (US $50) per 500 g. Qing Dai was provided as powder, and each patient took 1 g of Qing Dai orally twice a day without wrapping, according to the manufacturer’s recommendations. All 9 patients were on 5-ASA, and 7 patients were also on PSL. 5-ASA and PSL were taken at the recommended dose for at least 8 wk prior to the initiation of Qing Dai; however, unique cases include patient D, whose pharmacological regimen was changed from 3 g/d of Pentasa (Ferring Pharmaceuticals, Malmö, Sweden) to 3.6 g/d of Asacol (Warner Chilcott, Dublin, Ireland) 4 d before the start of Qing Dai and patient F, whose prescription was changed from 4 g/d of Pentasa to 3.6 g/d of Asacol 3 d before taking Qing Dai. The clinical activity index (CAI)[1] of the patients before taking Qing Dai and 1, 2, and 4 mo after initially taking Qing Dai and the endoscopic Matts grade[2] before and after treatment with Qing Dai were retrospectively collected from clinical records because those data had been routinely recorded for all UC patients.

To investigate the mechanisms of action of Qing Dai, we performed electron spin resonance (ESR) spectroscopy by using the spin-trapping reagent 5-(2,2-dimethyl-1,3-propoxy cyclophosphoryl)-5-methyl-1-pyrroline N-oxide (CYPMPO)[3]. Hydroxyl radicals were produced in an aqueous solution containing 50 μL of 2 mmol/L H2O2 dissolved in 0.1 mol/L phosphate buffer. Fifty microliters of 8.9 mmol/L DMPO with or without 2.5, 25, or 250 μg/mL Qing Dai was incubated for 60 s after the addition of 50 μL of 0.2 mmol/L FeSO4, and results were obtained using a JEOL-TE X-Band spectrometer (JEOL, Tokyo, Japan).

All 9 patients began taking Qing Dai voluntarily. Nonetheless, for this paper, written informed consent was obtained from all of the patients included in the analysis.

The average CAI score (mean ± SD) decreased from 8.3 ± 2.4 to 2.4 ± 3.4 (P < 0.001) (Figure 1A). This effect persisted unless the patient withdrew from Qing Dai treatment. Patients A and C showed recurrence of UC after cessation of Qing Dai. However, their CAI score immediately recovered upon re-administration of Qing Dai. Five patients, including 3 patients with left-sided colitis, 1 patient with pancolitis and 1 patient with proctitis, were monitored by endoscopy. The average time interval between endoscopies was 7 mo (range 2-10 mo). The endoscopic Matts grade (Figure 1B) also decreased from 3.4 ± 0.5 to 2.2 ± 0.8 (P = 0.02). Six of the 7 patients (86%) who were also taking PSL were able to discontinue this corticosteroid.

Patient E, a 28-year-old man who presented with hematochezia was diagnosed as having left-sided UC and demonstrated remarkable benefit from Qing Dai therapy. Initially, patient E was prescribed 4 g/d sulfasalazine and 40 mg/d PSL for the treatment of UC, and the hematochezia rapidly disappeared. However, the hematochezia recurred as the patient reduced his intake of PSL. Thus, patient E required the dose of PSL to be increased several times, and treatment with AZA and cytapheresis failed to provide long-term improvement. Patient E met our criteria for refractory UC. After 3 years of treatment, patient E began to use Qing Dai of his own volition. One month after treatment with Qing Dai, hematochezia in patient E was resolved, and the CAI score decreased from 9 to 4. The serum C-reactive protein level also decreased from 1.33 mg/dL to 0.11 mg/dL. The CAI score fell to 0 after 3 mo of treatment with Qing Dai, and patient E was withdrawn from PSL and AZA after 8 mo of Qing Dai treatment. Notably, this effect of Qing Dai therapy persisted for more than 2 years. The endoscopic findings are shown in Figure 2A and B. The ulcers completely disappeared and only erythema was observed. In contrast, patient D did not respond to Qing Dai, and required the administration of conventional medications.

Figure 2 Endoscopic finding before and after treatment. A: Before the initiation of Qing Dai, endoscopic examination showed severe ulcers and erosions in the rectum; B: After 3 mo of Qing Dai treatment, the mucosal damage completely disappeared.
Safety

Although no serious adverse side effects were reported in patients consuming Qing Dai, 2 patients developed mild headaches while taking Qing Dai. The headaches disappeared upon reduction of the dose of Qing Dai by half. 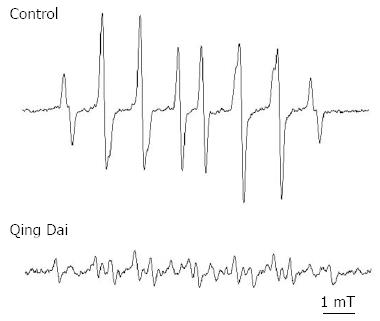 Approximately 21% of patients with inflammatory bowel disease reportedly use alternative treatment outside of the medications typically prescribed to treat inflammatory bowel disease in a clinical setting[4]. Consistent with this statistic, several herbal medications have shown promising efficacy and safety in patients with UC, including preparations that contain a sulfhydryl group in their structure[5]. Evidence of the clinical efficacy of Qing Dai and its constituent substances has been previously reported. Yuan et al[6], reported that Qing Dai enemas are associated with significant clinical efficacy in the treatment of chronic hemorrhagic radiation proctitis. Likewise, Xilei-san, which is a major ingredient in Qing Dai, has traditionally been used for the treatment of UC in China and, more recently, in Japan[7,8]. Accordingly, in a double blind, randomized clinical trial setting, Fukunaga et al[9] reported that suppositories of Xilei-san showed significant efficacy in patients with ulcerative proctitis refractory to conventional medications. In the current study, we found a good clinical response to Qing Dai with no serious adverse side effect in patients with intractable UC. Ferber has also reported very low toxicity for Qing Dai[10].

There are few reports on the pharmacokinetics of Qing Dai. Because Qing Dai appears in the stool without significant digestion, the mucosal healing effect could be associated with the ability of Qing Dai to provide a protective coating to the injured mucosa. Qing Dai has been reported to have anti-inflammatory effects on human neutrophils based on its ability to suppress superoxide generation[11]. The same authors reported efficacy of Qing Dai in patients with recalcitrant psoriasis in a randomized study[12]. Indirubin, a constituent of Qing Dai, has been reported to produce anti-inflammatory effects by suppressing interferon-α, interleukin-6[13], and nuclear factor κB (NF-κB) production[14]. Xilei-san was also reported to decrease the expression of toll-like receptor 4, NF-κB, and tumor necrosis factor-α in mice with oxazolone-induced colitis[15]. Interestingly, cytapheresis, which has been used in patients with active UC as a highly effective therapeutic, possesses a similar mechanism of action by decreasing reactive oxygen-producing neutrophils and interleukin-6 secretion[16]. In the present investigation, although we observed a strong hydroxyl radical scavenging effect in Qing Dai, further studies are warranted to fully understand the mechanisms of action in UC patients.

This study has several limitations. First, this was not a double-blind placebo-controlled trial. Second, basic experiments using animal models were not conducted. In light of these limitations, we are planning an in vivo study and a prospective multicenter double-blind placebo-controlled trial to investigate the effects of Qing Dai in patients with inflammatory bowel disease.

In conclusion, this investigation showed that oral Qing Dai is associated with significant clinical and endoscopic improvement of UC in patients who maintain active disease despite receiving conventional medications. The hydroxyl radical scavenging effect appears to be one mode of action of Qing Dai. Our results suggest that Qing Dai may represent a clinically relevant intervention for patients with inflammatory bowel disease. Additional controlled trials using larger cohorts of patients should be conducted to verify the findings of this investigation.

We would like to thank Dr. Hiroyuki Hanai for providing advice regarding the improvement of this manuscript.