AIM: To verify the usefulness of FibroQ for predicting fibrosis in patients with chronic hepatitis C, compared with other noninvasive tests.

CONCLUSION: FibroQ is a simple and useful test for predicting significant fibrosis in patients with chronic hepatitis C.

Viral hepatitis C is one of the most common liver diseases in the world, affecting an estimated 200 million individuals[1], with a particularly high prevalence in Southern Taiwan[2]. Approximately 60%-80% of infected individuals develop chronic hepatitis[2], and patients with higher degrees of fibrosis may progress rapidly to cirrhosis and hepatocellular carcinoma. Approximately 20% of patients with chronic hepatitis C advance to cirrhosis, and 5% of them develop hepatocellular carcinoma[3,4].

Knowledge of the extent of liver fibrosis is important for the clinical management of chronic hepatitis C. Patients with no fibrosis or with only portal fibrosis at the time of diagnosis have more favorable outcomes and a lower chance of reaching end-stage liver disease than patients with severe fibrosis or cirrhosis[5-8]. The probability of developing cirrhosis and/or other unfavorable outcomes is closely related to fibrosis stage, therefore, liver biopsy is recommended prior to antiviral treatment. However, liver biopsy adds expense, requires an experienced clinician, and may cause complications, including mortality in 0.018% of patients[9]. In addition, sampling errors and inter- and intraobserver variations may lead to understaging of cirrhosis, particularly macronodular cirrhosis[10-13]. Hence, several noninvasive tests have been proposed to assess the severity of hepatic fibrosis as an alternative to liver biopsy. As reported by Akkaya et al[14], alanine aminotransferase (ALT) levels in patients with hepatitis C virus (HCV) infection correlate with periportal bridging/necrosis, and Lu et al[15] have reported that thrombocytopenia is a surrogate for cirrhosis. Furthermore, aspartate aminotransferase (AST)-to-platelet ratio index (APRI)[16] and AST/ALT ratio (AAR)[17], cirrhosis discriminant score (CDS)[18], age-platelet index (API)[19], Pohl score[20], FIB-4 index[21], and Lok’s model[22] are well-known parameters that are based on routine laboratory data, and are therefore readily available in clinical practice (Table 1). These parameters have been reported to predict the presence of significant fibrosis and extensive fibrosis in some patients[14-23].

Recently, we proposed a novel index, FibroQ[23], which is calculated from common laboratory test results that include prothrombin time international normalized ratio (PT INR), platelet count, AST, ALT, and age, as 10 × (age × AST × PT INR)/(ALT × platelet count) to predict significant fibrosis. In a previous study, we enrolled 140 patients with hepatitis B virus (HBV) and HCV infection. To focus on HCV, 113 of these patients were included in the 237 patients in the present study. The aims of the present study were to assess the value of the FibroQ index and to determine its threshold values to differentiate significant fibrosis. We also compared the discriminatory performance of FibroQ to that of AAR, APRI, CDS, API, Pohl score, FIB-4 index, and Lok’s model.

We retrospectively studied 250 consecutive treatment-naïve patients with chronic HCV infection that was confirmed by the presence of anti-HCV antibody by enzyme immunoassay methods (Abbott Architect I 2000; Abbott, Champaign, IL, United States) as recorded in the departmental files of the Department of Gastroenterology, Chang Gung Memorial Hospital, Chiayi, between May 2005 and December 2008. All patients were Taiwanese. The research study was approved by the Clinical Research Sub-committee of the hospital. Patients with the following conditions were excluded from the study: those co-infected with human immunodeficiency virus or HBV, and those with alcohol consumption in excess of 20 g/d, hepatocellular carcinoma, liver transplantation, antiviral or immunosuppressive therapy, metabolic liver disease, insufficient liver tissue for fibrosis staging, or recent warfarin or other anticoagulant usage. Thirteen patients were excluded due to incomplete data on liver function tests or platelet count within 1 mo before the date of biopsy. The clinical data were reviewed, and the following parameters were recorded: sex, age, AST, ALT, platelet count, PT INR, hemoglobin, white blood cell count, serum creatinine, free thyroxine, thyroid-stimulating hormone, and bilirubin. Liver biopsies were performed by hepatologists and were interpreted by a single pathologist using the Metavir fibrosis score[10]. Significant liver fibrosis and extensive liver fibrosis were defined as Metavir fibrosis scores of ≥ 2 (F2, F3 and F4) and ≥ 3 (F3 and F4), respectively. 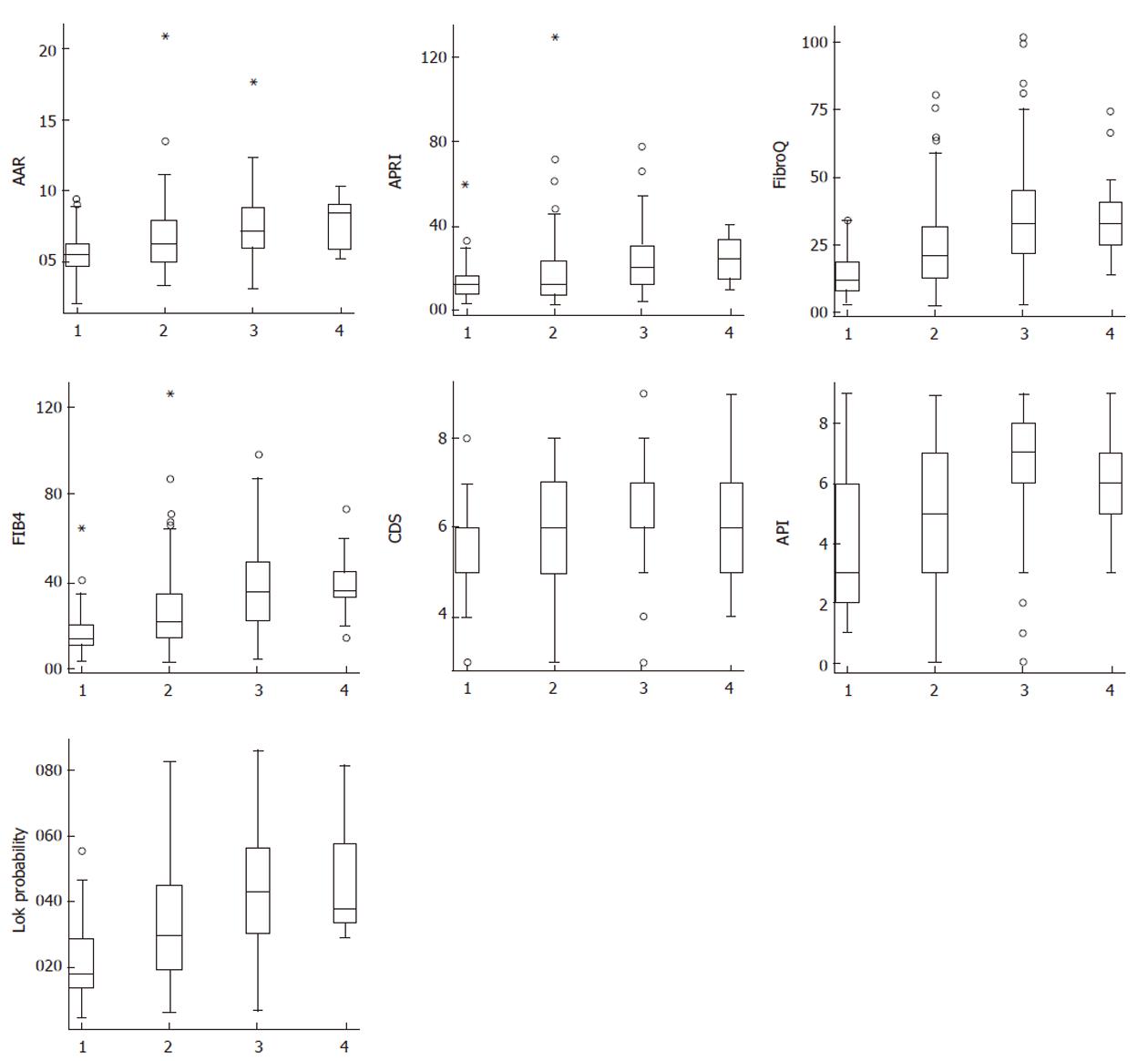 Figure 1 Score values according to Metavir fibrosis stages. Each outlier value is represented by a small circle symbol (o) in the Box Plot graph. If an outlier is more than 3 times the inter-quartile range away from Q1 or Q3, it is classified as an extreme outlier, asterisk sign (*). The top and bottom of each box are the 25th and the 75th percentiles. The line through the box is the median, and the errors bars are the 5th and 95th percentiles. AAR: AST/ALT ratio; APRI: AST-to-platelet ratio index; AST: Aspartate aminotransferase; ALT: Alanine aminotransferase; API: Age-platelet index; CDS: Cirrhosis discriminant score. 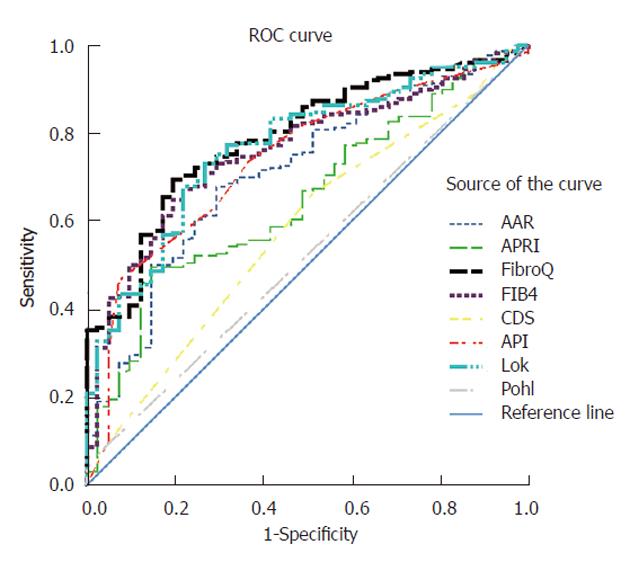 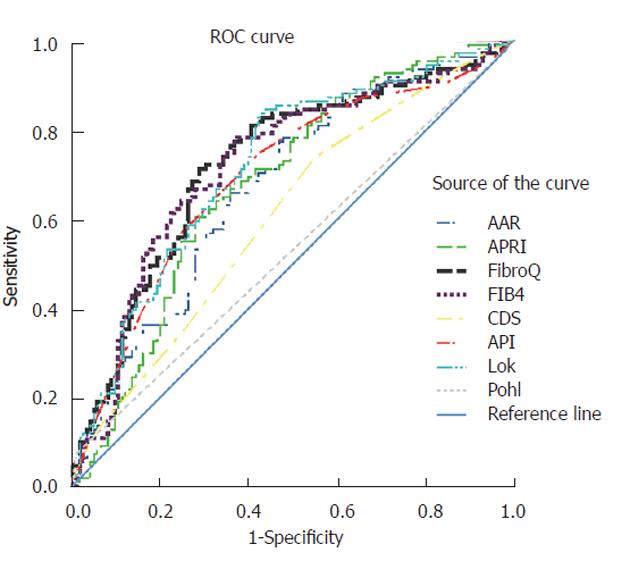 Since lower cutoffs were originally described to exclude significant fibrosis, specific attention must be paid to NPVs that ranged from 18.0% to 41.7%. For the same cutoffs, NPVs to exclude extensive fibrosis showed superior performance compared with performance on significant fibrosis cases, ranging from 54.8% to 90.0%. For example, a FibroQ < 1.4, which was observed in 25.7% of patients, excluded significant fibrosis with 36.1% certainty and excluded extensive fibrosis with 75.4% certainty. The best predictive value was observed for positive Pohl score, but this cutoff selected only 3.8% of patients.

To assess the pathological grade and stage of chronic viral hepatitis, liver biopsy is necessary. However, liver biopsy is invasive, costly, and has its own limitations[11,25]. Hence, several noninvasive tests combining biological parameters have been proposed to attempt to predict the degree of fibrosis, with the objective of replacing liver biopsy[20,26-29]. There are also some noninvasive tests, such as PIIIP (N -terminal peptide of type III procollagen)[29], fibrometer[26], Hepascore[30], FibroTest[31], and Forn’s score[27]. The current study excludes these tests due to their expense (e.g., procollagen level), because they can only be checked in the laboratory (e.g., hyaluronic acid), or because they are not included in the routine monitoring and investigations of patients with chronic liver disease (e.g., haptoglobin or cholesterol).

We believe that an ideal noninvasive test for assessing liver fibrosis should be reliable, reproducible, and based on readily available tests and parameters. APRI, AAR, FibroQ, FIB-4, CDS, API, Lok’s model, and Pohl score fulfilled these criteria, therefore, we compared these measures for evaluation of patients with chronic hepatitis C. The aim was to validate the usefulness of these simple tests in a community hospital in an area with hyperendemic HCV infection.

In addition, bias of the biopsy examination is also acknowledged. Regev et al[32] have reported discordances in fibrosis stage in one third of patients when right and left liver lobes were compared. As a liver biopsy specimen from a cirrhotic liver is often fragmented, the inadequate size of biopsy samples can lead to an underestimation of fibrosis as reported by Colloredo et al[33] and Bedossa et al[11]. Therefore, some cases diagnosed as F3 may have had cirrhosis (F4). Biopsy length and fragmentation were not recorded or compared in our study; however, a recent study has found that these variables did not affect the performance of their model[34]. Furthermore, we should notice that four different staging systems were used in the original studies for liver fibrosis tests. AAR results were based on the Scheuer system; APRI and FIB-4 were based on the Ishak system; FibroQ, API, and Pohl’s score were based on the Metavir system; and CDS and Lok’s model were based on a modified Knodell system. The different staging systems using either a 5-stage (F0-F4) or a 7-stage (F0-F6) scale prevented us from comparing fibrosis scores more precisely.

Although the current study was retrospective, it had some advantages over previous studies. First, the patients were all from a treatment-naïve population with HCV infection as the only problem. Second, we compared all fibrosis markers that combined routine blood tests rather than markers only available in the laboratory. Third, all histological assessment was performed blindly by one pathologist, thus preventing interobserver bias in fibrosis staging. Finally, using a 5-stage fibrosis scoring system in this study resulted in a lower tendency to induce interpretation error than would be the case with a 7-stage scoring system[22].

We divided the patients in two different ways to obviate liver biopsy. The first grouping was F1 vs F2, F3 and F4, the second was F1 and F2 vs F3 and F4. The rationale for the F1 vs F2, F3 and F4 grouping was that there was no need for treatment in patients with mild fibrosis. Patients with severe fibrosis or cirrhosis need screening for hepatocellular carcinoma, esophageal varices, and complications of portal hypertension, therefore, we made a second patient grouping of F1 and F2 vs F3 and F4. Applying the cutoff values, we were able to discriminate patients according to two relevant thresholds of fibrosis based on the needs for clinical treatment decision-making.

The result of our current study showed that Pohl score and CDS had high specificity but low sensitivity, and their AUCs were not statistically different from 0.5. In addition, FibroQ, FIB-4, and Lok’s model showed the best performance characteristics. The AUCs for predicting significant fibrosis were 0.789, 0.785 and 0.768, respectively. The AUCs for predicting extensive fibrosis were 0.728, 0.725 and 0.721, respectively[21-23]. To evaluate the accuracy of the fibrosis index, we also checked the percentage of patients that were correctly classified according to the stage of fibrosis. Using FibroQ results below the lower cutoff value (0.6) and above the higher cutoff value (1.6), 157 of 178 patients (88.2%) were correctly identified as having or not having significant fibrosis, which was a better performance than in the original study on the use of FibroQ[23]. Using FIB-4, 72.3% of the 155 patients with FIB-4 values outside 1.45-3.25 would be correctly classified, and liver biopsy could be avoided in 65.4% of patients, which is slightly lower than the value of 71% reported by Sterling et al[21]. Using Lok’s model with a cutoff of 0.2 to exclude extensive fibrosis, only 11.7% of those with extensive fibrosis were misclassified. Using a cutoff of 0.5, only 11.9% of those without extensive fibrosis had a score > 0.5. These results are compatible with those reported by Cheung et al[22]. Using the same cutoff values, 7.8% and 14.8% of patients were misclassified in their study.

In summary, the current study demonstrated that FibroQ, FIB-4, and Lok’s model were simple methods that correlated well with the stages of fibrosis in patients with chronic hepatitis C. FibroQ showed a trend to be superior to the other modalities evaluated. Further prospective studies involving larger numbers of patients are warranted to validate the usefulness of FibroQ in clinical practice.

Viral hepatitis C is one of the most common liver diseases in the world, affecting an estimated 200 million individuals. Knowledge of the extent of liver fibrosis is important for the clinical management of chronic hepatitis C. Liver biopsy is recommended prior to antiviral treatment. However, liver biopsy may cause complications, including mortality in 0.018% of patients. Hence, several noninvasive tests have been proposed to assess the severity of hepatic fibrosis.

FibroQ is a simple and useful noninvasive test for predicting significant fibrosis in patients with chronic hepatitis C.

FibroQ, APR, AAR, CDS, API, Pohl score, FIB-4 index, and Lok’s model are well-known parameters that are based on routine laboratory data and are reported to predict the presence of liver significant fibrosis and extensive fibrosis.

The study is of particular practical medical interest. The results provide sufficient evidence that the FibroQ correlates with significant liver fibrosis in patients with hepatitis C virus.