Carcinosarcomas are rare, malignant, biphasic tumors simultaneously comprising carcinoma and sarcoma in a single tumor. We present an extremely rare case of gastric carcinosarcoma with an osteoblastic component that drastically changed its shape within 2 mo. A 59-year-old male patient presented to the emergency outpatient unit with a complaint of black stool. Gastrointestinal endoscopy showed an ulcerated mass in the cardia of the lesser curvature of the stomach. Biopsy specimens revealed only adenocarcinoma. Two months later, the ulcerated lesion drastically changed its shape into an exophytic tumor. Total gastrectomy was performed. In the resected specimen, the gastric tumor contained both adenocarcinoma and sarcoma components with lace-like osteoid. The patient died 7 mo after the operation, and an autopsy was performed. In the autopsy, widespread metastases were present in the liver, lung, lymph nodes and peritoneum. In this report, we describe a case of gastric carcinosarcoma and presume its tumorigenesis based on the autopsy findings.

Carcinosarcomas are rare, malignant, biphasic tumors simultaneously comprising carcinoma and sarcoma in a single tumor. Although carcinosarcomas of the esophagus are most frequently observed in the upper gastrointestinal tract[1], they are very rarely found in the stomach. We performed a keyword search of the literature for gastric carcinosarcoma. Published articles, limited to English abstracts indexed primarily in the PubMed database, through to 2012, were reviewed. Until 2012, at least 46 cases of gastric carcinosarcoma have been reported[2-20]; most of them in Japanese patients. In this article, we present a rare case of gastric carcinosarcoma with an osteoblastic component that drastically changed its shape.

A 59-year-old Japanese male patient presented to the emergency outpatient unit with a complaint of black stool. He was an office worker. He had no apparent past medical history and took no medications. There was no family history of malignant neoplasm. On physical examination, the abdomen was flat and not tender. Laboratory data were normal with the exception of a white blood cell count of 13 100/μL and an elevated serum carcinoembryonic antigen (CEA) level of 12.5 ng/mL (normal, < 5.0 ng/mL).

Gastrointestinal endoscopy showed an ulcerated mass in the cardia of the lesser curvature of the stomach (Figure 1A). The esophagogastric junction was not involved with the tumor. Biopsy from the lesion showed tubular adenocarcinoma. Two months later, upper gastrointestinal endoscopy was performed again and showed that the ulcerated lesion had drastically changed its shape into an exophytic mass (Figure 1B). Although the patient had multiple liver metastases, palliative total gastrectomy was performed to control gastric bleeding and ameliorate anemia. 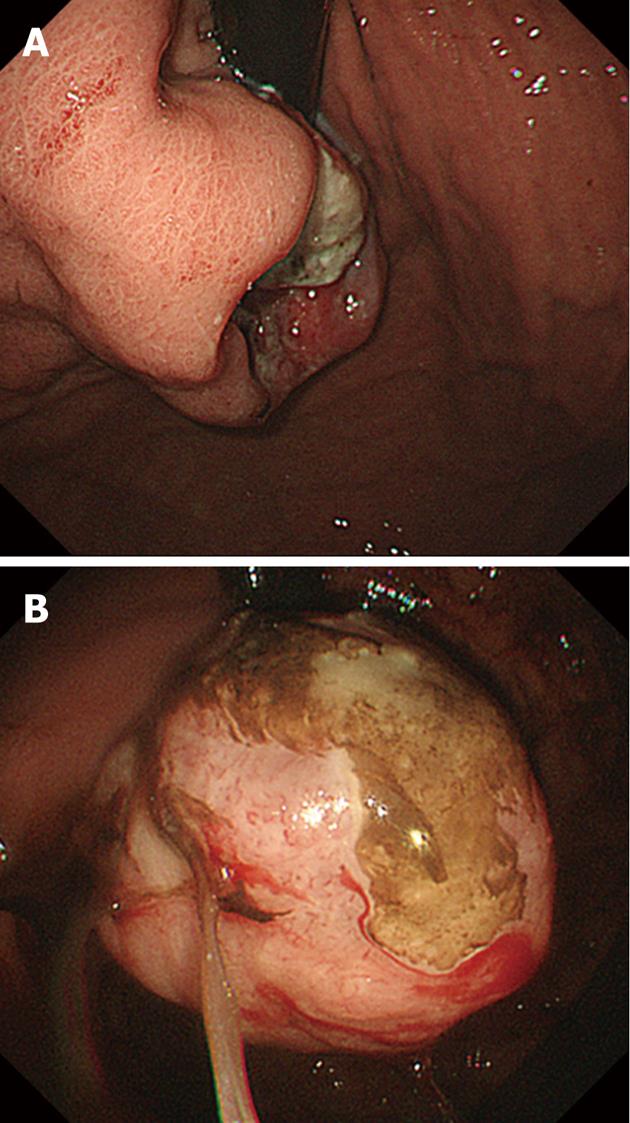 Figure 1 Retroflexed endoscopic view of the lesion in the gastric cardia. A: Ulcerated lesion; B: Two months later, the lesion changed its shape into an exophytic mass.

On macroscopic examination of a 27 cm × 21 cm total gastrectomy specimen, an 11.5 cm × 10.5 cm × 5.0 cm exophytic tumor was found in the cardia (Figure 2A). Erosion and necrosis were observed on the tumor surface. The cut surfaces of the tumor were tan-gray and fleshy (Figure 2B). 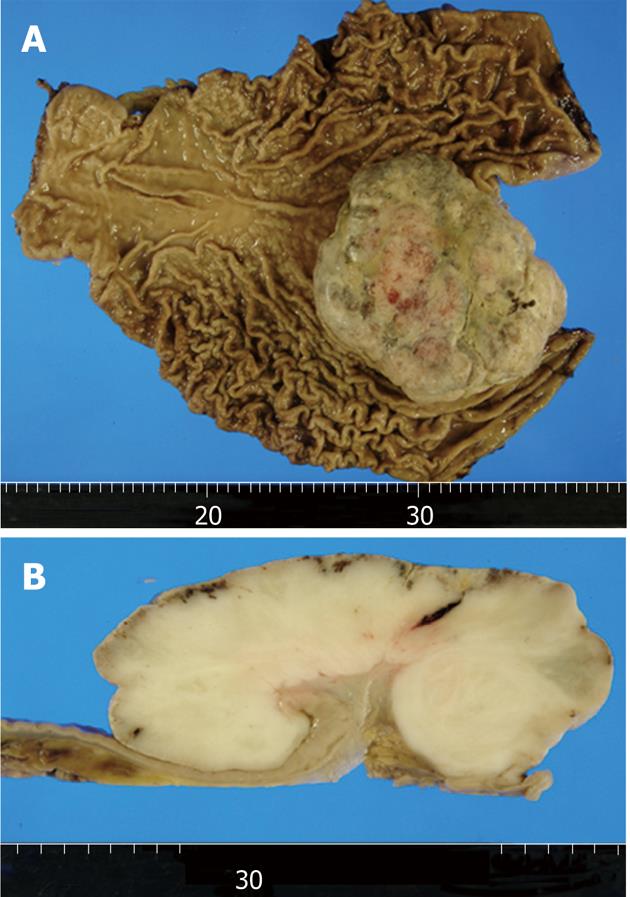 Figure 2 Macroscopic view of the resected specimen. A: An exophytic tumor located in the gastric cardia; B: Cross section of the tumor.

On light microscopy, the tumor contained both epithelial and spindle cell components. Spindle cell clusters and fascicles with the appearance of stromal sarcomas were observed in large regions. A small amount of lace-like osteoid was found in the sarcoma component (Figure 3A). Irregular fused glands with cuboidal and columnar cells appearing to overlap these regions were observed (Figure 3B). The spindle cells generally had coarse chromatin, elongated oval nuclei, small nucleoli, pale eosinophilic cytoplasm, and frequent mitotic activity. In adjacent regions of the tumor, dysplastic glands and goblet cell metaplasia were seen within the mucosa. No Helicobacter pylori (H. pylori) was observed. The tumor infiltrated the subserosal layer. Lymph node metastases with an adenocarcinoma component were detected in seven of 22 resected lymph nodes. Venous and lymphatic involvements with adenocarcinoma components were also observed. Immunohistochemically, cytokeratin AE1/AE3 positivity was observed in the tubular adenocarcinoma component (Figure 4A). There was no staining with cytokeratin AE1/AE3 in spindle cells. In spindle cells, positive staining with vimentin and negative staining with desmin, smooth muscle actin, c-kit, S-100, CD34, and HHF-35 was observed (Figure 4B). Widespread positive nuclear staining with p53 and more limitedly with Ki-67 was observed in both glandular and spindle tumor cells. 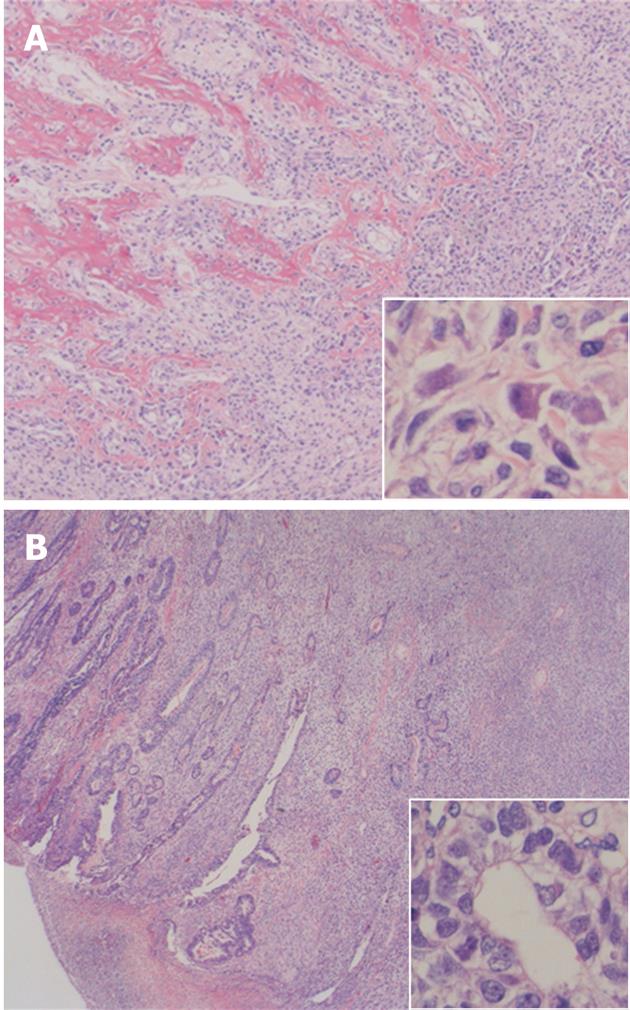 Figure 3 Representative microphotographs. A: Hematoxylin and eosin stain of the tumor (4 ×), a large part of the tumor comprised spindle cells producing lace-like osteoid; B: Tubular adenocarcinoma coexisting in the tumor. High-power view of tumor cells (40 ×) is shown in the insets. 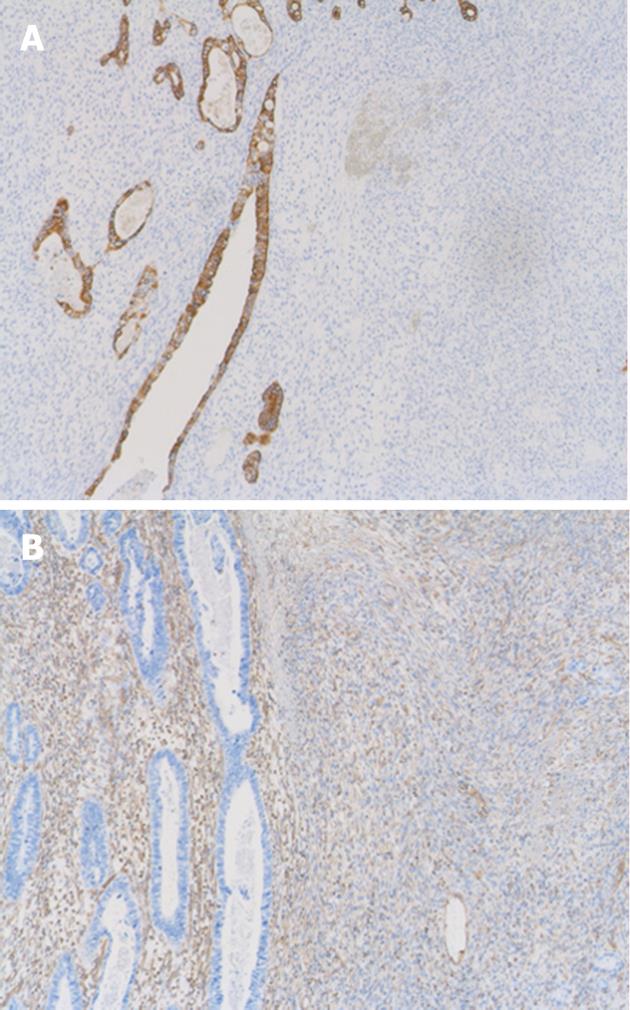 Figure 4 Immunohistochemical staining of the tumor. A: Cytokeratin AE1/AE3 staining showing positive expression in the adenocarcinoma component but not in the sarcomatous component (4 ×); B: Vimentin demonstrating opposite staining pattern (4 ×).

In the autopsy, widespread metastases were present in the liver, lungs, lymph nodes, and peritoneum. Although liver metastases showed both adenocarcinoma and spindle cell components, only the adenocarcinoma component was present in lung metastases. Carcinosarcoma and pulmonary thromboembolism were the major causes of death in this case.

The histogenesis of biphasic tumors remains unclear. Some researchers have argued that a primary carcinoma stimulates excessive stromal proliferation, resulting in a carcinosarcoma[21]. Other researchers, however, are of the opinion that the spindle cell component reflects anaplasia within the carcinoma[4,22-24].

There are findings supporting the idea that gastric biphasic tumors are epithelial in origin[3,5,11]. In a number of studies, cells with an intermediate appearance between that of epithelial and sarcomatous components have been seen, and these cells have been reported to stain positively with epithelial differentiation markers such as CEA. However, there have been cases in which spindle cells were differentiated as entirely smooth muscle or cartilage. In the literature, gastric carcinosarcomas differentiated as rhabdomyoblastic, neuroblastic, or osteoblastic have been reported[14,25-27]. A combination of carcinosarcoma and carcinoid tumor with neuroendocrine malignancy was reported in two cases[13,25]. Therefore, it may be that in their beginning, these tumors developed with diverse differentiation of a multipotent stem cell.

The histological findings observed in our case may support the theory that gastric biphasic tumors are epithelial in origin. All biopsy specimens obtained at the initial endoscopy showed only adenocarcinoma. However, in the surgically resected specimen, the spindle cell component occupied > 90% of the tumor, and a small number of adenocarcinoma cells were observed in the peripheral zone of the tumor. In the autopsy, the liver metastases that had been detected in the ante-mortem examination were composed of both spindle cell and adenocarcinoma components. In contrast, small metastases of the lung first diagnosed at autopsy showed only adenocarcinoma. Although these differences in tumor components at each metastatic site might have resulted from differences in affinities of each tumor component for lymphatics or veins, we believe that the development of the adenocarcinoma component might have preceded that of the sarcoma component in our case. Rapid proliferation of the sarcoma component may have accounted for the drastic deformation of the tumor in our case. Although the tumorigenesis of this lesion is interesting from the perspective of epithelial-mesenchymal transition[28,29], a more sophisticated approach will be required to elucidate this problem.

From a clinical standpoint, gastric carcinosarcomas share clinicopathological features with gastric adenocarcinomas. The age range of the 46 cases previously reported was 29 to 83 years with a mean of 56 years[8,20,29]. There were 33 male and 13 female patients. Tumors that showed polypoid growth and ulcerated lesions were present in 22 and 19 cases, respectively. In our patient, the tumor exhibiting the ulcerative lesion rapidly changed its shape into an exophytic mass and was located in the cardia.

Gastric carcinosarcomas have a low incidence of metastasis, but mortality is high[5,11,13,14,25,26,30]. Approximately 50% of previously reported patients with gastric carcinosarcoma died of the disease within 6 mo[8,20,27]. In those cases that metastasize, the metastases may show pure carcinoma, pure sarcoma, or a mixture of both[16]. In our case, both components were present.

Histologically, carcinosarcomas include epithelial and sarcomatous regions, and the two tumor components may be separate or overlapping[3,5,13,14,25,26]. The tumor is often accompanied by atrophy, dysplasia, and intestinal metaplasia[5,11]. Several types of differentiation of the sarcoma component have been reported, including smooth muscle, cartilage, striated muscle, and neuroendocrine cells. However, production of osteoid by the sarcoma component is extremely rare. We observed staining with cytokeratin AE1/AE3 only in the epithelial component in the case presented. Vimentin positivity and production of lace-like osteoid suggested that spindle cells had differentiated as osteosarcoma. In our patient, widespread p53 and Ki-67 positivity confirmed the high proliferation and malignant potential of this tumor. H. pylori may not be strongly associated with carcinosarcoma[31,32].

In summary, we reported a case of gastric carcinosarcoma with an osteoblastic component that rapidly deformed within 2 mo. Carcinosarcoma of the stomach is a rare tumor and has a poor prognosis. It is impossible to establish standard therapy for this rare disease with a large-scale clinical trial, therefore, detailed descriptions and collections of individual cases should be continued.