Nonalcoholic fatty liver disease (NAFLD), defined by excessive liver fat deposition related to the metabolic syndrome, is a leading cause of progressive liver disease, for which accurate non-invasive staging systems and effective treatments are still lacking. Evidence has shown that increased ferritin levels are associated with the metabolic insulin resistance syndrome, and higher hepatic iron and fat content. Hyperferritinemia and iron stores have been associated with the severity of liver damage in NAFLD, and iron depletion reduced insulin resistance and liver enzymes. Recently, Kowdley et al demonstrated in a multicenter study in 628 adult patients with NAFLD from the NAFLD-clinical research network database with central re-evaluation of liver histology and iron staining that the increased serum ferritin level is an independent predictor of liver damage in patients with NAFLD, and is useful to identify NAFLD patients at risk of non-alcoholic steatohepatitis and advanced fibrosis. These data indicate that incorporation of serum ferritin level may improve the performance of noninvasive scoring of liver damage in patients with NAFLD, and that iron depletion still represents an attractive therapeutic target to prevent the progression of liver damage in these patients.

We read with interest the article by Kowdley et al[1] reporting an association between serum ferritin and the severity of liver damage in patients with nonalcoholic fatty liver disease (NAFLD), and strongly recommend it to the readers.

NAFLD is defined by the presence of liver fat deposition related to systemic insulin resistance and the metabolic syndrome[2]. In susceptible individuals, NAFLD is associated with oxidative hepatocellular damage, inflammation, and activation of fibrogenesis, i.e., non-alcoholic steatohepatitis (NASH)[3], with potential progression towards cirrhosis and hepatocellular carcinoma (HCC)[4], whereas simple steatosis is believed to represent a relatively benign condition[5]. Due to the epidemic of obesity and the metabolic syndrome, NAFLD is now the most common liver disease and the leading cause of altered liver enzymes in Western countries[6,7], and it is supposed to become the leading cause of end-stage liver disease, liver transplantation and HCC within the next 10-20 years. Considering the high prevalence of the NAFLD (20%-34% of Western population) two key clinical challenges are expected: the development of noninvasive methods for the diagnosis, staging and follow-up of NASH, and effective treatment strategies counteracting disease progression. Although the gold standard for diagnosis is still liver biopsy, it would be impossible to perform in such a large population at risk, whereas algorithms to predict steatohepatitis and liver fibrosis are still inefficient, need validation, and leave a large grey area[5]. In addition, although promising results have been shown for anti-oxidants[8], no therapeutic trial has yielded convincing results in the progression of liver damage[9], and no pharmacologic therapy is yet approved for NASH.

Over the last years, there has been accumulating evidence about a strong association between hyperferritinemia and mild iron overload unrelated to hereditary hemochromatosis and manifestations of the metabolic syndrome[10-12], including NAFLD[13-18], as recently reviewed by our group[19]. Increased ferritin level was detected in about 30% of unselected patients with NAFLD[20], which has been associated with increased hepatic iron, as determined by histological and radiological assessment, and by quantitative phlebotomy[15,20-22]. However, it is likely that inflammation, cytokines, oxidative and endoplasmic reticulum stress, and the genetic background contribute to ferritin induction by compartmentalization of iron in macrophages in a subset of NAFLD patients without histologically detectable iron stores[19,22-26]. Does hyperferritinemia reflect a subclinical increase in hepatic iron also in this latter subgroup? Very recent data, which have been generated thanks to the availability of magnetic resonance imaging protocols for reliable estimates of tissue iron concentration, confirmed a close link between hepatic iron stores, steatosis, and metabolic diseases. Haap et al[27] reported that in healthy non-diabetic subjects, serum ferritin is strongly associated with hepatic iron stores, and hepatic iron stores are independently associated with insulin sensitivity and hepatic fat accumulation. On the other hand, Zheng et al[28] reported that in Chinese subjects, subclinical hepatic iron overload is more frequent (60%) in subjects with pre-diabetes and diabetes than in those with normal glucose tolerance, and hepatic iron concentration explains > 40% of glycated hemoglobin variance. Furthermore, in patients with steatosis, body iron stores have been linked to a higher risk of metabolic complications, such as insulin resistance and diabetes[29-31], and to the faster progression of cardiovascular diseases[32-35].

Our group first reported an association between hyperferritinemia, NASH, and the severity of liver damage[13], which was later confirmed by other groups, even if evidence was still controversial[1,14,19,36]. Histological evidence of hepatic iron accumulation has also been associated with an increased risk of fibrosis in large multicenter studies in patients with NAFLD both from Europe and the NASH Clinical Research Network (NASH-CRN) in the United States[15,37], whereas beta-globin mutations, the best predictor of parenchymal iron overload in the Mediterranean area, were associated with an almost double risk of severe fibrosis[16]. Furthermore, iron overload has also been associated with HCC in Italian patients with NASH-related cirrhosis[38]. Recent data obtained in animal models are also consistent with a synergistic interaction between liver fat and iron in the pathogenesis of liver damage, which may be related to the induction of iron-dependent cell death (ferroptosis)[39,40]. A schematic presentation of the hypothesized mechanisms underlying hepatic iron accumulation and the role of iron in the progression of liver damage in NAFLD is shown in Figure 1. 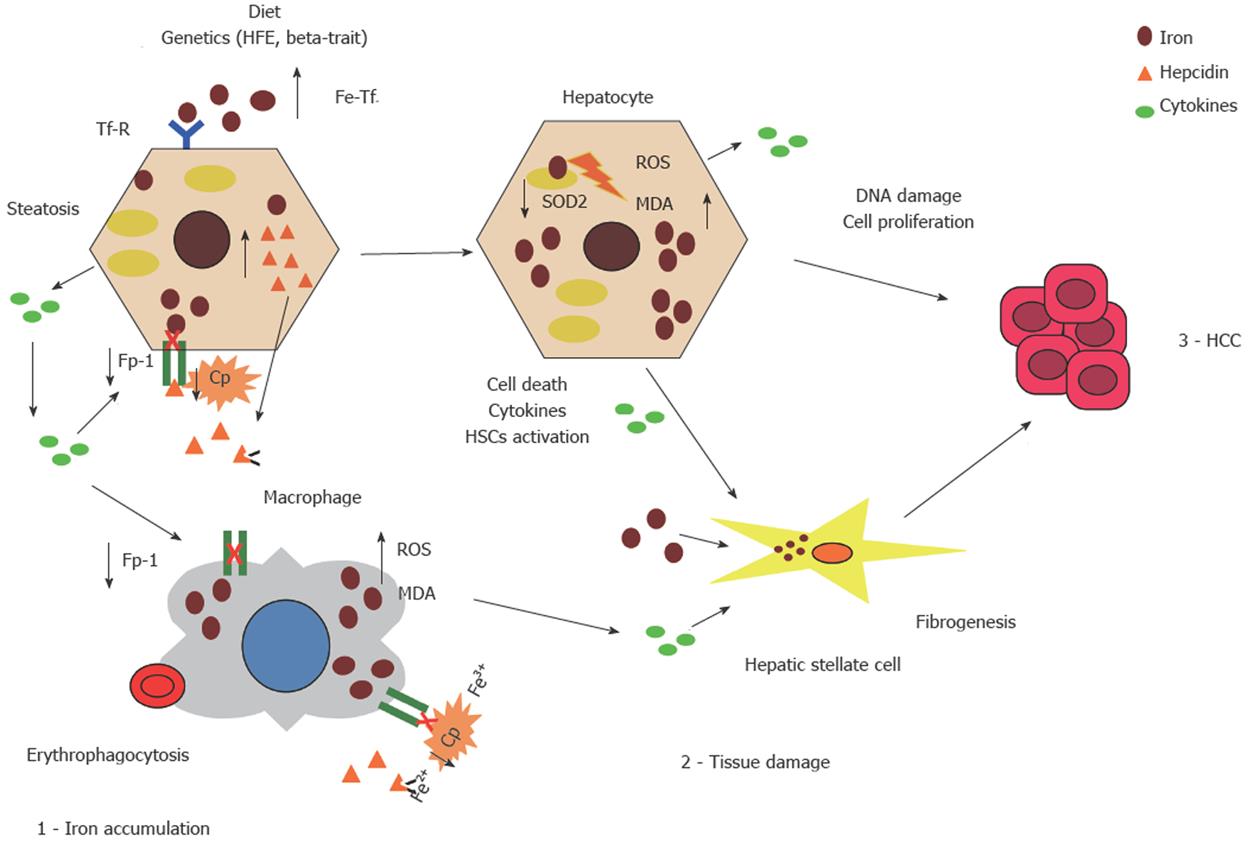 Most importantly, iron overload represents also a treatable condition. Experimental evidence suggests that iron depletion induced by chelators induces glucose uptake and utilization in hepatocytes in vitro and in the liver in vivo, increasing insulin receptor binding activity and signaling[41].

Several reports indicate that iron depletion, most frequently achieved by phlebotomy, may be beneficial in patients with mild iron overload associated with NAFLD. Iron depletion has been first reported to improve insulin sensitivity in a short term in patients with NAFLD with and without increased ferritin levels in two pilot studies in patients with impaired glucose tolerance[42] and normal glucose tolerance[43], and it led to decreased HbA1c levels, heightened insulin secretion and insulin sensitivity in a randomized controlled study in a small number of patients with type 2 diabetes and increased ferritin levels[44]. Both venesection therapy and dietary therapy improved serum ferritin, metabolic parameters and liver function in a controlled study in patients with hepatic iron overload associated with the metabolic syndrome[45]. However, in a matched case-control study in 128 patients with diet-resistant NAFLD, iron depletion reduced insulin resistance more than lifestyle modifications alone, independently of other confounding factors[21]. Finally, in an observational study in 198 NAFLD patients without diabetes with adjustment for propensity score, iron depletion was associated with a higher probability of normalization not only of insulin resistance, but also of liver enzymes during follow-up compared with lifestyle modifications alone[46].

Within this context, the novel findings reported by Kowdley et al[1] provided significant insight into this field. In this study, the authors assessed the relationship between elevated serum ferritin levels (defined as > 1.5 times the upper normal limit) and NAFLD severity in a multicenter study in 628 adult patients with NAFLD from the NAFLD-CRN database with central re-evaluation of liver histology and iron staining. Despite that the upper normal limits were specific for gender, hyperferritinemia was observed more frequently in males (25% vs 17%), and was strongly associated with other indices of iron stores including serum iron, transferrin saturation, and hepatic iron staining. Different from what observed in a previous study by our group[15], hyperferritinemia was also associated with alanine and aspartate aminotransferases, but in line with our results[15] with lower platelets, suggesting increased liver fibrosis[47]. Histological features of NAFLD, including steatosis, hepatocellular ballooning, diagnosis of NASH, and fibrosis, were more severe in patients with increased serum ferritin, and at multivariate logistic regression analysis, hyperferritinemia remained significantly associated with advanced hepatic fibrosis [odds ratio (OR): 1.66, 95% CI: 1.05-2.62] and increased NAFLD activity score (OR: 1.99, 95% CI: 1.06-3.75). Based on these results, it is concluded that serum ferritin is associated with hepatic deposition and worsened histological activity in patients with NAFLD, and it is a useful variable to identify NAFLD patients at risk of NASH and advanced fibrosis. An important finding, in view of the previously cited debate about significance of increased ferritin in patients without iron overload, is that hyperferritinemia was associated with enhanced histological activity even in patients without histologically detectable iron deposition.

Therefore, adding to the previous literature[15,19], this elegant and solid confirmation of the association between hyperferritinemia and severe hepatic fibrosis/NASH has two major implications. The first one and most scientifically grounded is that, whatever its cause (iron overload or altered compartmentalization, inflammation, cellular stress), in patients with NAFLD, hyperferritinemia is very frequently and strongly associated with liver damage. Since serum ferritin evaluation is widely available in clinical practice and relatively inexpensive, the next step is to test its inclusion in noninvasive prognostic scores of liver damage related to NAFLD to improve their predictive power[1,5,47]. Interestingly, a score incorporating increased ferritin levels, called the “National Association of Fraternal Insurance Counselors score” has already been developed and validated in a large series of Japanese patients, and although the evaluation of a serum marker such as the collagen IV 7S domain is required, that is not easily available outside Japan clinically, it showed a superior predictive power for NASH and severe fibrosis compared with other noninvasive scores[48], and other authors have confirmed the predictive power of ferritin on liver damage in NAFLD[49].

Secondly, but not less important, more clues, that link with increased hepatic iron stores or altered iron compartmentalization in macrophages with steatosis, insulin resistance, and progressive liver disease, are being found[19,50]; and while the results of a small pilot randomized controlled trial evaluating the effect of iron depletion on the progression of histologically evaluated liver damage in patients with NAFLD and increased iron stores (NCT 00658164) are being expected, the accumulated available evidence allows to validate the effect of iron depletion on the prevention of hepatic, metabolic and cardiovascular complications of NAFLD.