Mechanical lithotripsy (ML) is usually considered as a standard treatment option for large bile duct stones. However, it is impossible to retrieve oversized stones because the conventional lithotripsy basket may not be able to grasp the stone. However, there is no established endoscopic extraction method for such giant stone removal. We describe a case of successful extraction of a 4-cm large stone using a gastric bezoar basket. A 78-year-old woman had suffered from upper abdominal pain for 20 d. Contrast-enhanced computed tomogram revealed a 4-cm single stone in the distal common bile duct (CBD). Endoscopic stone retraction was decided upon and endoscopic papillary balloon dilation was performed using a large balloon. An attempt to capture the stone using a standard lithotripsy basket failed due to the large stone size. Subsequently, we used a gastric bezoar basket to successfully capture the stone. The stone was fragmented into small pieces and extracted. The stone was completely removed after two sessions of endoscopic retrograde cholangiopancreatography; each of which took 30 min. No complications occurred during or after the procedure. The patient was fully recovered and discharged on day 11 of hospitalization. ML using a gastric bezoar basket is a safe and effective retrieval method in select cases, and is considered as an alternative nonoperative option for the management of difficult CBD stones.

Since endoscopic sphincterectomy (EST) was introduced for bile duct stone extraction, up to 90% of bile duct stones could be removed by using EST and standard endoscopic maneuvers[1]. However, bile duct stone removal can be challenging in patients with large stones (> 12 mm), multiple stones, barrel-shaped stones, and tapering or tortuosity of the distal common bile duct (CBD)[2]. Mechanical lithotripsy (ML) is an established alternative in cases of large CBD stones that cannot be removed using standard endoscopic retrieval methods. Large and hard concretions, however, often make ML difficult. There are several nonoperative options available[1-5], but there is no established technique for difficult large stones.

Here, we report a case of a giant CBD stone that was retrieved by ML using a gastric bezoar basket.

A 78-year-old woman was referred to our institution due to upper abdominal pain and vomiting that occurred 20 d prior to admission. Blood pressure was 100/50 mmHg, heart rate was 96 beats/min, and temperature was 36 °C. There was tenderness to palpation in the right upper quadrant of the abdomen, but rebound tenderness was not documented. Laboratory tests showed: white blood cells, 25 600/mm3; neutrophils, 97.2%; hemoglobin, 14.5 g/dL; total bilirubin, 5.5 mg/dL; aspartate aminotransferase, 104 IU/L; alanine aminotransferase, 87 IU/L; serum alkaline phosphatase, 510 IU/L; and γ-glutamyl transpeptidase, 365 IU/L.

Contrast-enhanced computed tomogram (CT) of the abdomen revealed a single 4-cm stone in the distal CBD, with marked and diffuse dilation of the entire biliary tree (Figure 1). Endoscopic retrograde cholangiopancreatography (ERCP) was urgently performed because the patient’s mental state and vital signs had deteriorated on the day of admission. We identified an opening of a choledochoduoudenal fistula near the ampulla of Vater where a large amount of pus was emitted. A 4.0 cm × 3.2 cm filling defect was noted in the distal CBD on the cholangiogram (Figure 2). Nasobiliary drainage through the fistulous tract was performed endoscopically. After the first session, the signs of systemic infection improved as well as the patient’s performance status, and the second session of ERCP was performed on day 3 in hospital, to retrieve the stone.

Figure 1 Computed tomogram revealed a huge stone in the distal common bile duct. Marked dilation of the gallbladder and bile duct was also seen. A: Axial view; B: Coronal view. 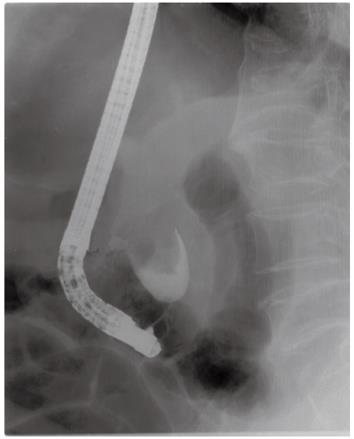 Instead of EST, endoscopic papillary balloon dilation was performed (for 60 s, one session) using a large balloon catheter, 15 mm in diameter (Controlled Radial Expansion balloon; CRE®; Boston Scientific, Natick, MA, United States) for esophageal dilation. ML using a usual lithotripter (Stonebuster®, 40 mm-inner diameter; Medi-Globe GmbH, Achenmühle, Germany) was tried and failed to capture the stone due to its large size. Subsequently, we were able to capture the stone using a gastric bezoar basket (Stonebuster®, 60 mm-inner diameter; Medi-Globe GmbH) that was larger than the usual basket for ML (Figure 3). The captured stone was broken into fragments with a mechanical lithotripter (Memory Eight Wire Basket 2 cm × 4 cm (MB5-2X4-8®; Cook Medical Inc., Winston Salem, NC, United States) (Figure 4). Then, we performed endoscopic nasobiliary drainage to prevent cholangitis induced by the fragmented stones. On the 6th day in hospital, follow-up cholangiogram revealed multiple small filling defects within the CBD (Figure 5). All of the stone fragments were extracted with the basket, and we confirmed complete clearance of the CBD by a balloon-occluded cholangiogram (Figure 6). The patient was fully recovered and discharged on the 11 th day of hospitalization. 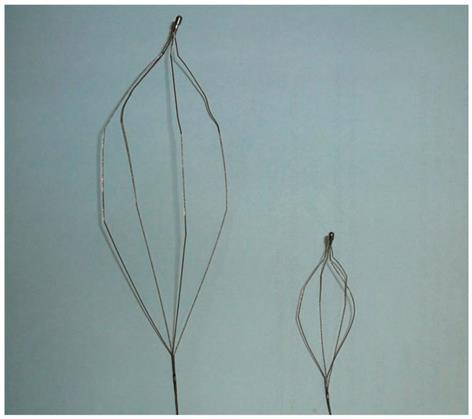 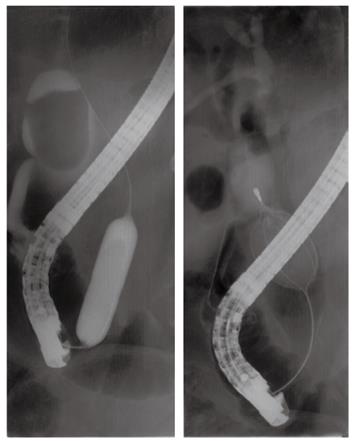 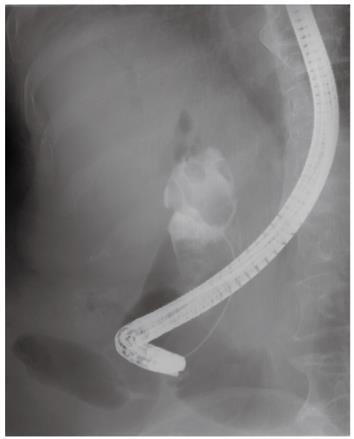 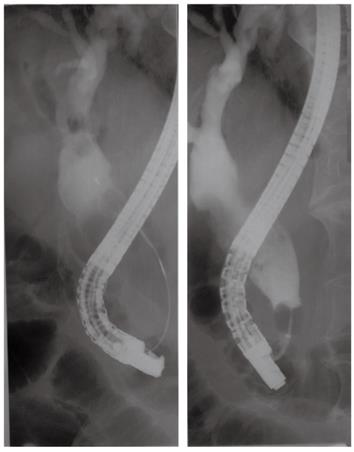 Since ML was first introduced by Riemann et al[6] for the retrieval of CBD stones, ML has been the method of choice in cases of large or impacted stones. Additionally, in cases with concomitant narrowing of the distal CBD from which it is impossible to remove stones by EST, ML is the simplest, most cost-effective, and safe procedure[1-5]. For large stones > 1 cm, there are several therapeutic options other than ML. Endoluminal electrohydraulic lithotripsy (EHL) via the peroral or percutaneous route[3,7,8], extracorporeal shockwave lithotripsy (ESWL)[1,3], laser lithotripsy[9], and stenting[10,11] are nonoperative options, especially for elderly patients and patients at high surgical risk.

ESWL, EHL and laser lithotripsy yield similar success rates of 80%-95% and may be used in combination. These techniques are not available at all treatment facilities, thus, the selection of a specific treatment option may differ between institutions or physicians. There have been some studies of EHL using balloon catheters under fluoroscopy[7] and single-operator duodenoscope-assisted cholangioscopy-guided EHL[8]. These are complex and very labor-intensive procedures. ESWL usually requires multiple sessions and an additional endoscopic procedure for complete stone retrieval[1]. The placement of biliary stents is used as an immediate management option to prevent cholangitis or stone impaction[5], and for retrieval in choledocholithiasis patients who are intractable to the usual lithotripsy option, or have a high surgical risk[6,11]. However, recent studies have shown high rates of late morbidity and mortality after long-term stenting. Temporary use of self-expandable metallic stents combined with EHL has been reported for avoiding long-term stent placement in patients with intractable CBD stones[11].

Large stones (2.5 cm or 2.8 cm in diameter), or hard concretions, often make ML cumbersome or even impossible[3]. Indeed, a stone size > 2.8 cm is associated with lithotripsy failure[12]. Another study has shown that impacted stones, as well as stone size only, is a predictive factor for stone extraction failure, especially in cases where the bile duct is not dilated adequately to accommodate a large stone[5]. In our case, the stone was oversized (4 cm) and dilation of the bile duct was not sufficient to capture the stone using a basket for ML. Other retrieval modalities, such as EHL, and laser lithotripsy, were not promptly available. Also, ESWL was not indicated because the stone was radiolucent. Therefore, we selected a 6-cm diameter bezoar basket to grasp the large stone completely for ML.

We performed endoscopic papillary large balloon dilation (EPLBD) without EST before ML for easy removal of the large stone. Several reports have shown the efficacy of EPLBD for treatment of large bile duct stones[13-15]. Most studies have carried out EST followed by EPLBD, but some groups have attempted stone extraction by EPLBD alone without EST[16]. The preceding EST has a lower risk of pancreatitis that the pancreatic orifice is separated from the biliary orifice after EST and it may result in balloon dilation forces away from the pancreatic duct[15]. In our opinion, preceding EST before EPLBD may not play a role in the guidance of balloon dilation because the direction of ballooning by the inflating catheter is always radial. Therefore, our case had LBS only without a previous EST.

In conclusion, ML using a gastric bezoar basket was safe and effective for the retrieval of a CBD stone, which was extraordinarily large. The bezoar basket is not a newly designed device, but an existing tool originally used for the removal of bezoars. This is believed to be the first published attempt to retrieve a giant and intractable bile duct stone and should be considered as an alternative nonoperative option for the management of difficult CBD stones.