METHODS: Colonic biopsy samples were taken from 15 newly diagnosed IBD patients and from 10 healthy controls. In IBD patients, specimens were obtained both from inflamed and non-inflamed areas. The iAP mRNA and protein expression was determined by reverse transcription-polymerase chain reaction and Western blotting analysis, respectively. Tissue localization of iAP and Toll-like receptor (TLR) 4 was investigated by immunofluorescent staining.

CONCLUSION: Lower than normal iAP protein levels in inflamed mucosa of IBD patients may indicate a role for iAP in inflammatory lesions in IBD. Based on our results, administration of exogenous iAP enzyme to patients with the active form of IBD may be a therapeutic option.

The etiology of inflammatory bowel disease (IBD), including ulcerative colitis (UC) and Crohn’s disease (CD), remains unclear. It is hypothesized that, in genetically susceptible individuals, inappropriate and ongoing activation of a mucosal immune response against luminal antigens is a major cause of the inflammation[1,2]. In active IBD, the tolerance towards the resident intestinal flora is decreased. The balance between protective and commensal luminal bacterial species is lost and, due to increased mucosal permeability and insufficient mucosal clearance, the commensal flora and pathogenic bacteria enter into the lamina propria and destructive inflammatory responses are unavoidable[3-6]. This prompts an exaggerated immune response with the activation of the two arms of mucosal immune system, the innate and adaptive elements[7,8].

The activation of the innate immune system heavily depends on the recognition of microbes by pattern recognition receptors such as Toll-like receptors (TLRs). The TLR family consists of 13 members, and each has different type of ligands. One of them is TLR4, which is responsible for recognition of lipopolysaccharide (LPS), a principal component of the bacterial outer membrane. Uncontrolled activation of TLR4 may lead to the loss of mucosal barrier integrity, aggravation of the inflammatory response within the gut epithelial mucosa, increased expression of TLR-ligands and tumorigenesis[9-13]. Previously, we found increased TLR4 protein and mRNA levels in the inflamed mucosa of children with IBD and celiac disease[14,15].

An increasing body of evidence also supports the regulatory role of intestinal alkaline phosphatase (iAP) in TLR activation. iAP is expressed on the apical surface of enterocytes and exists in membrane-bound and soluble forms[16]. iAP plays an essential role in the inactivation of LPS through dephosphorylation of its lipid A moiety, thus generating a non-toxic monophosphoryl section. This dephosphorylated monophosphoryl lipid A is not able to form a complex with TLR4[17,18].

There is only one human study where expression of iAP (mRNA) in adult IBD patients was analyzed, and lower than normal iAP mRNA expression was found in epithelial specimens[19]. It should be noted, however, that no data on the level of iAP protein in IBD mucosa is available. The aim of our study was to investigate iAP protein and mRNA levels in affected and non-affected colon mucosa of children with newly diagnosed IBD. In addition, our secondary aim was to determine the localization of iAP enzyme with TLR4.

Ten children (7 boys, 3 girls; median age: 10.5 years, range: 1.5-15 years) with newly diagnosed CD, 5 children (3 boys, 2 girls; median age: 11 years, range: 6-17 years) with newly diagnosed UC, and 10 control children (5 boys, 5 girls; median age: 9.5 years, range: 1.5-16 years) were enrolled in the study (Table 1). IBD was diagnosed according to the Porto criteria[20,21]. The presenting symptoms in CD were perianal fistula, hematochezia, abdominal pain, diarrhea-bloody diarrhea, or anemia. All of the patients later diagnosed with UC had hematochezia, and some had abdominal pain and weight loss. Colonic biopsy samples were taken from macroscopically inflamed and non-inflamed sites of the colonic mucosa in children with CD. As each UC children had pancolitis, only inflamed mucosa was obtained from UC patients (Table 1). The activity score was calculated by means of the Pediatric Crohn’s Disease Activity Index (PCDAI) and Pediatric Ulcerative Colitis Activity Index (PUCAI)[22,23]. Measuring disease activity in pediatric CD is based on disease history (abdominal pain, stools per day and general well-being), laboratory findings, weight, abdominal and perianal examination, extra-intestinal manifestations, and growth rate[24]. PUCAI requires no laboratory measurements[25]. The mean PCDAI of our patients was 33.75, and the mean PUCAI was 35. This means that both groups had moderate-to-severe disease activity. Control children were referred to the outpatient clinic with rectal bleeding, constipation or weight loss. Colonoscopy was part of their diagnostic procedure and the biopsy specimens showed normal macroscopic appearance and histology. Written informed consent was obtained from parents prior to the procedure, and the study was approved by the Semmelweis University Regional and Institutional Committee and Research Ethics. 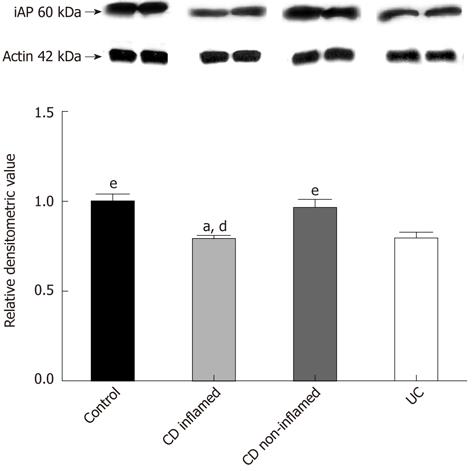 iAP mRNA expression in inflamed and non-inflamed colonic mucosa in IBD was comparable with that in controls (Figure 2). 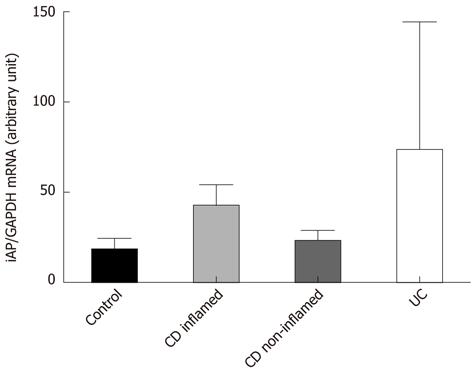 The distribution of iAP was restricted to the epithelial surface of the colonic and terminal ileal mucosa in each group. No fluorescent signal was detected in Lieberkühn crypt cells, in goblet cells, and in lamina propria immune cells. The co-localization of iAP with TLR4 showed intense staining with a dotted-like pattern. iAP was present in inflamed and non-inflamed mucosa of patients with CD, UC, and in control specimens irrespective of whether it was present in the terminal ileum or in the colon. However, the fluorescent TLR4 signal was more pronounced in the colon compared with the terminal ileum in all groups (Figure 3).

A dysregulated immune response, involving the innate immunity of the intestinal mucosa plays a role in the pathomechanism of IBD. The maintenance of microbiota and host is supported by the balance of microbiota and immune activation that may be disturbed in IBD[26]. Previously we and others showed that activation of TLR4 by bacterial lipopolysaccharide contributes to disease progression[14,27].

Recently, in connection with LPS-activated TLR4, a new enzyme, iAP has received increasing attention as a factor responsible for mucosal defense. iAP dephosphorylates and detoxifies LPS and, hence, generates an inactive, non-toxic form. This may be one of the key factors why dephosphorylated LPS is unable to bind to TLR4 and the innate immune system is not triggered. iAP may control the interaction between TLR4 in the intestinal mucosa and LPS derived from the bacterial flora[28,29].

In the present study, we obtained data regarding the protein level, mRNA expression and localization of iAP in the intestinal mucosa of children with IBD. Lower than normal iAP levels were observed in the inflamed mucosa of CD and UC patients.

Previously it was hypothesized that the altered LPS-dephosphorylating activity may be a consequence of decreased iAP activity. We think that, in accordance with Tuin et al[19], our observations also suggest that iAP has a role in the pathogenesis of IBD. Decreased iAP levels in the inflamed mucosa may be associated with decreased LPS detoxification and, consequentially, with increased TLR4 activation. On the other hand, we found no significant difference in iAP mRNA expression that may indicate a possible role of posttranscriptional regulation.

Tuin et al[19]demonstrated decreased iAP mRNA expression in pretreated CD patients compared with controls. However, it should be noted that, in this study, more than half of the patients received immunosuppressive drugs such as infliximab, methotrexate, corticosteroids, and thiopurine at the time of sample collection, which may influence iAP mRNA synthesis[30]. The unique feature of our study is the investigation of children without prior immunomodulatory therapy, hence, our results can be considered as characteristic for IBD.

Previously, we have demonstrated increased TLR4 mRNA expression and protein levels in the inflamed colonic mucosa of children with IBD[14]. Therefore, the finding that iAP and TLR4 are co-localized, is particularly important from two aspects. First, it supports a linked role of iAP in the maintenance of mucosal integrity both in healthy and in diseased subjects. Second, the lower than normal iAP in the presence of a higher than normal TLR4 expression might indicate an imbalance in iAP/TLR4 that would result in an increased susceptibility of the mucosa to LPS. Indeed, this mechanism is already demonstrated in animal models of induced colitis. Our results are the first to indicate the presence of this phenomenon in man.

The current management of IBD consists of conventional therapy, but severe therapy-resistant cases require more powerful therapies, such as biological treatment[31]. Therapeutic manipulation to restore the balance of microflora may have a strong impact on mucosal healing of IBD[32]. In animal models of dextrane sodium sulfate (DSS)-induced colitis, exogenously administered iAP improved the signs of colitis both macroscopically and microscopically[33]. Microscopic injury scores of DSS-induced colitis in iAP-knockout mice were much higher than in the wild-type group, which may reveal the mucosal defense role of iAP[34]. In a human study performed in adult subjects a 7-d course of iAP products decreased the activity index of therapy-resistant UC patients[35]. Oral administration of iAP may have a beneficial effect in the case of severe intestinal epithelial damage[36]. Our results obtained in a pediatric population might indicate a similar approach may be of benefit in children with IBD.

In summary, to the best of our knowledge, this is the first demonstration of a decrement in the iAP enzyme in the mucosa of patients with IBD. A decreased level of iAP with reduced LPS-detoxifying capacity could be responsible for increased bacterial passage across the intestinal mucosa of patients with IBD, and this may play an important role in pathogenesis. In addition, co-localization of iAP and TLR4 was demonstrated in the epithelial compartment. Based on our results, administration of exogenous iAP enzyme to patients with active form of IBD may be a supplemental therapeutic option.

We are grateful for the excellent technical assistance of Mária Bernáth.

The level of intestinal alkaline phosphatase (iAP) protein in inflammatory bowel disease (IBD) mucosa is very important for the study of IBD. The authors have demonstrated firstly the presence of iAP enzyme in the colonic mucosa of patients with IBD. The decreased level of iAP enzyme with reduced lipopolysaccharide-detoxifying capacity could be responsible for the increased bacterial passage across the intestinal mucosa in the inflamed mucosa of patients with IBD and this may play a role in the pathogenesis.

To the best of our knowledge, this is the first demonstration of a decrement in iAP enzyme in the mucosa of patients with IBD.

A decreased level of iAP with reduced lipopolysaccharide-detoxifying capacity could be responsible for increased bacterial passage across the intestinal mucosa of patients with IBD, and this may play an important role in the pathogenesis of IBD. In addition, co-localization of iAP and Toll-like receptor-4 was demonstrated in the epithelial compartment.

Based on their results, the authors propose administration of exogenous iAP enzyme to patients with the active form of IBD as a supplemental therapeutic option. However, this hypothesis should be tested in future clinical trials.

This is a well-written manuscript reporting about significance of intestinal alkaline phosphatase in the colonic mucosa for the pathogenesis of inflammatory bowel disease in children. The manuscript contains clear component of novelty-to the best my knowledge, the authors have firstly demonstrated the decrement of iAP enzyme in the mucosa of patients with IBD.