CONCLUSION: Changes in smooth muscle contractile filaments do not appear to play a major role in postoperative motility disorders in small bowel atresia.

MATERIALS AND METHODS
Patients and tissues

The specimens were fixed in 4% paraformaldehyde, embedded in paraffin blocks and sectioned at 2-4 μm (Leica SM 2000 R) followed by drying overnight at 37 °C. Before immunohistochemical staining, the paraffin sections were dewaxed for 10 min in xylene, 10 min in acetone and 10 min in acetone/Tris-buffered saline (TBS: 1:1). After treatment, the slides were washed in TBS.

When antigen retrieval by heat was required, dewaxed paraffin sections were placed in microwave-proof tubes containing target retrieval solution (Dako). The slides were treated in the tubes for 5 min at 600 W in a microwave (SS 566H; Bosch, Munich, Germany). The evaporated volume was replaced with distilled water, and the procedure was repeated twice. After microwave treatment, the slides were cooled and washed in TBS.

Immunohistochemical analysis focused on the proximal and distal parts of the resected ileum. The sections were evaluated by two independent investigators using light microscopy (magnification: 40 ×). HE staining was used to visualize the overall histology of the specimens. The distribution and density of immunoreactive SMA-positive and desmin-positive muscle filaments were studied in each part of the resected bowel (proximal, atretic and distal). Because immunohistochemical staining cannot be quantified, semi-quantitative scoring was performed as follows: - no expression, + low expression, ++ moderate expression, +++ high expression.

Standard HE staining revealed normal muscle components within the bowel wall. The muscle layers of the proximal bowel appeared to be slightly thicker. However, these findings were not consistent in all specimens (Figure 1).

The gross histology of the affected (proximal) bowel remained unchanged. There was a variable increase in muscle layer thickness. 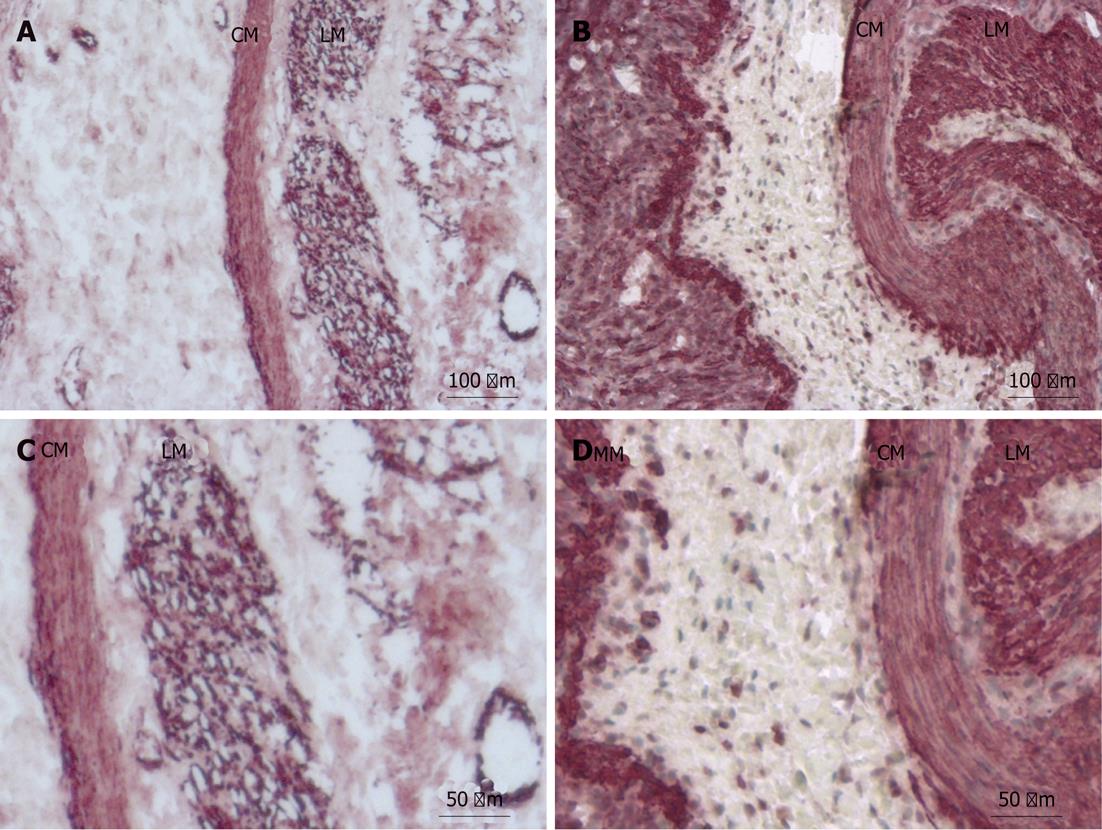 The gross histology of the proximal and distal small bowel was unchanged, as observed by desmin immunohistochemistry. The expression of desmin-positive filaments was moderately reduced within all muscle layers of the affected proximal bowel (moderate expression: ++) compared with controls (high expression: +++). There were no differences in desmin expression between the tunica muscularis propria (circular and longitudinal muscle) and the tunica muscularis mucosa within the proximal bowel (Figure 3A and C). 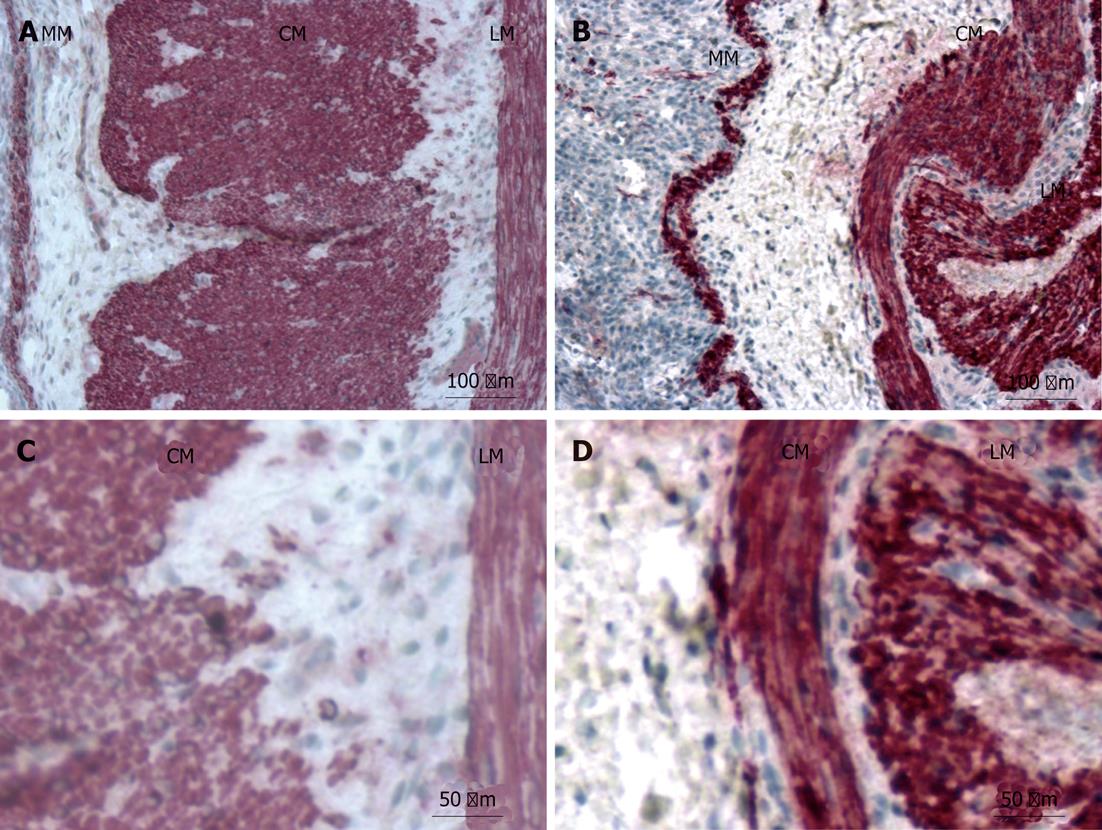 The extent of damage to the smooth muscle in small bowel atresia has not been well characterized. Previous studies of histological and ultrastructural changes of the affected bowel have investigated the ENS and the ICCs[13-20]. In these studies, differential changes of the ENS and ICCs were especially found in the proximal dilated bowel in small bowel atresia. Our present study revealed only moderate changes in the morphology of the of the smooth muscle and contractile filaments of the resected bowel proximal to the small bowel atresia. Furthermore, varying degrees of smooth muscle layer thickening was evident. The correlation between the degree of smooth muscle layer thickening and the duration of small bowel obstruction could not be evaluated since no data on the prenatal onset of the true obstruction were available.

A previous animal study creating a partial obstruction in dog ileum tissue revealed that the ganglion cells increased in size and the smooth muscle of the dilated bowel became thicker[21].

Another study used a murine partial small bowel obstruction model and revealed that 2 wk following the onset of a partial obstruction, the bowel increased in diameter, and hypertrophy of the tunica muscularis occurred oral to the obstruction site[22]. ICC networks were disrupted orally to the obstruction, and this disruption was accompanied by the loss of electrical slow waves and responses to enteric nerve stimulation. These defects were not observed aboral to the obstruction. Furthermore, it was shown that the removal of the obstruction led to the redevelopment of ICC networks and the recovery of slow wave activity within 30 d. Neural responses were partially restored in 30 d[22]. Similar repair mechanisms may occur after surgical correction of small bowel atresia. It seems obvious that decreases in ICCs in small bowel atresia and their restoration after removal of the obstruction contributes to the regulation of gastrointestinal motility.

Masumoto et al[11] showed that the circular muscle of the proximal small bowel is hypertrophied and expresses less SMA. This study showed that the ultrastructure and distribution pattern of the SMA-positive smooth muscle cells remained similar in the affected bowel compared with controls.

In another study, Masumoto et al[23] showed muscular alterations, such as abnormal smooth muscle bundles within the proximal segment of small bowel atresia. We could not confirm the existence of these abnormal smooth muscle bundles in our investigations. A case report recently revealed long lasting chronological changes within the ENS, muscle components and ICCs in small bowel atresia[24]. Interestingly, in this case, SMA-positive areas were found in both the circular and longitudinal musculature, and an increase in the proximal segment was observed at two different time points (newborn and 6 mo of age) compared with controls. The expression of SMA was similar in the distal segments compared with controls. Again, no clear changes were seen using SMA in the proximal bowel compared with the distal bowel and controls.

Ozguner et al[25] reported that the proximal segment of the atretic intestine showed structural deficits. Abnormal ganglia cells and defects in the intestinal musculature were prominent, but the intestinal mucosa remained intact. They found that abnormalities on both the antimesenteric and mesenteric sides, and their interpretation supported a vascular accident as a causative factor. Nevertheless, our study was not able to show muscular disruptions within the proximal bowel.

Previous studies have clearly shown that the ENS and ICCs are altered in the proximal and dilated bowel in small bowel atresia[12]. The innervation pattern of the proximal bowel resembles intestinal neuronal dysplasia[12]. These changes might be the result of a long-lasting bowel obstruction and bowel content stasis. Surprisingly, the smooth muscle appears hypertrophied, but substantial changes within its ultrastructure were not observed. Therefore, we believe that the moderate histological changes within the smooth muscle do not contribute to the pathogenesis of small bowel atresia. Furthermore, the moderately altered smooth muscle does not seem to play a major role in the postoperative gastrointestinal motility of the affected patients.

In conclusion the possible restoration of ICCs and the moderate changes within the contractile filaments of smooth muscle components in small bowel atresia suggest that changes within the ENS are responsible for the postoperative motility problems. Furthermore, we speculate that extensive resection of the dilated proximal bowel is necessary to restore passage in adequate time.

Small bowel atresia is a congenital anomaly of unknown cause. Despite early corrective surgery, patients carry a substantial morbidity because of postoperative gastrointestinal motility problems. Normal gastrointestinal motility is generated by the complex interaction of the enteric nervous system (ENS), the intestinal smooth muscle and the interstitial cells of Cajal (ICCs). Alterations in the ENS and ICCs may contribute to the motility problems in patients with small bowel atresia after surgery. It has not yet been investigated whether changes in the smooth muscle occur in small bowel atresia and whether these possible changes influence the postoperative course.

The relationship between the macroscopic and histological changes of the affected bowel and the postoperative motility disorder are still under investigation. Furthermore, the role of the smooth muscle and its contractile filaments in small bowel atresia needs to be further elucidated.

This study showed that the smooth muscle contractile filaments are only moderately altered in the proximal and dilated bowel in small bowel atresia. These results suggest that extensive resections of dilated proximal is not necessary in affected patients.

Previously shown changes within the ENS and the ICCs may influence postoperative gastrointestinal motility in affected patients. The moderate variations of smooth muscle contractile filaments in small bowel atresia do not seem to play a role in the postoperative course.

The manuscript is well written and addresses an important concept of a clinical problem.