Ascaris lumbricoides is the largest intestinal nematode parasite of man, which can lead to various complications because of its mobility. As the esophagus is not normal habitat of Ascaris, the report of esophageal ascariasis is rare. An old female presented with dysphagia after an intake of several red bean buns and haw jellies. The barium meal examination revealed a spherical defect in the lower esophagus. Esophageal bezoar or esophageal carcinoma was considered at the beginning. The patient fasted, and received fluid replacement treatment as well as some oral drugs such as proton pump inhibitor and sodium bicarbonate. Then upper gastrointestinal endoscopy was done to further confirm the diagnosis and found a live Ascaris lumbricoides in the gastric antrum and two in the duodenal bulb. The conclusive diagnosis was ascariasis. The esophageal space-occupying lesion might be the entangled worm bolus. Anthelmitnic treatment with mebendazole improved patient’s clinical manifestations along with normalization of the radiological findings during a 2-wk follow-up. Authors report herein this rare case of Ascaris lumbricoides in the esophagus, emphasizing the importance of awareness of this parasitic infection as it often presents with different and unspecific symptoms.

Ascaris lumbricoides is the giant intestinal roundworm, causing infection of the gastrointestinal tract and affects approximately one quarter of the world’s population. In clinical observations, the majority of patients are infected with intestinal ascariasis. Adult roundworms can be stimulated to migrate to any orifice by stressful conditions such as gastrointestinal disease, fever, anesthesia and anthelmintic drugs, so some complications such as acute cholecystitis, acute cholangitis, and acute pancreatitis caused by ascariasis of bile or pancreatic ducts have been reported. However, demonstration of the worms in esophagus is extremely rare. A case of esophageal ascariasis in a 15-year-old boy was reported by an Indian author in 1999[1], but it did not discuss the possible mechanism. Herein, we describe a case that showed a space-occupying lesion of the esophagus in an old woman caused by Ascaris and discuss the likely causes.

A 70-year-old female presented with recurrent dysphagia for 4 years, and was admitted to our hospital with complaints of symptoms worsening in the past 3 d. The patient complained that the dysphagia often occurred when she ate too fast, which was unrelated to the position or season and relieved by inducing vomiting through physical stimulation. She also had abdominal distension and frequent belching. Three days before admission, the symptoms of dysphagia could not be relieved by inducing vomiting after an intake of several red bean buns and haw jellies. Barium meal examination in a local hospital revealed a spherical defect in the lower esophagus allowing little barium to pass through (Figure 1). She had no specific past medical history which included digestive system disease. Upon physical examination, her general condition was normal, temperature 37 °C, blood pressure 120/75 mmHg, heart rate 64 beats/min, and respiratory rate of 18 breaths/min. She was thin but no signs of anemia. The abdomen was soft with normal bowel sounds and no peritoneal signs. The laboratory results were as follows: Hb 139 g/L, white blood cell 11.54 × 109/L, neutrophils 77.8%, eosinophils 0.3%. Markers for hepatitis A, B, C were negative. Kidney and liver function tests and serum electrolytes were normal. Fecal examination was not available due to absence of stools in the hospital. X-ray films of the chest and abdomen were performed immediately upon admission to our hospital and showed a globular high density shadow on the right side of trachea in the mediastinum, as well as a strand-like high density shadow in the right upper quadrant of abdomen, and excess barium remained in the colon, and lumbar spondylosis. We considered the following diagnoses: hiatal hernia, esophageal bezoar or esophageal carcinoma on the basis of the radiological appearance. 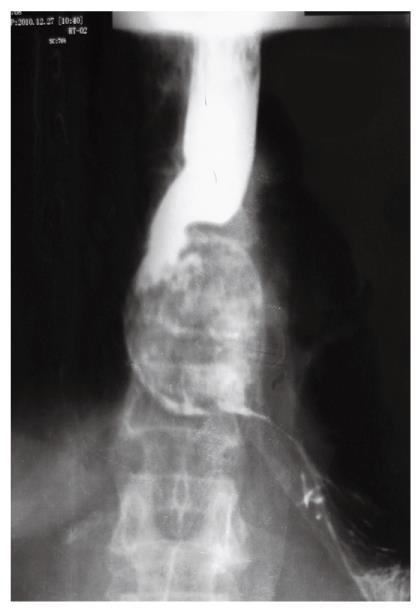 The patient fasted and was given fluid replacement treatment. Other oral drugs such as proton pump inhibitor (PPI) and sodium bicarbonate were also administered considering the possible existence of hiatal hernia and esophageal bezoar, while soybean oil was taken orally to help the barium pass with the feces. To further confirm the diagnosis, the patient underwent upper gastrointestinal endoscopy on the second day of admission. Endoscopy showed the mucous membrane of esophagus to be smooth and clear except for some slight congestion in the lower part; the body of stomach was normal and a live Ascaris lumbricoides worm was seen in the gastric antrum, where mucosa was thinner; there was a diverticula approximately 0.6 cm × 0.6 cm in size in the posterior wall of duodenal bulb and another two live worms were present (Figure 2). The congestion of duodenal mucosa also appeared. Endoscopic diagnoses were esophagitis, atrophic antral gastritis, duodenitis with diverticulum, and ascariasis. 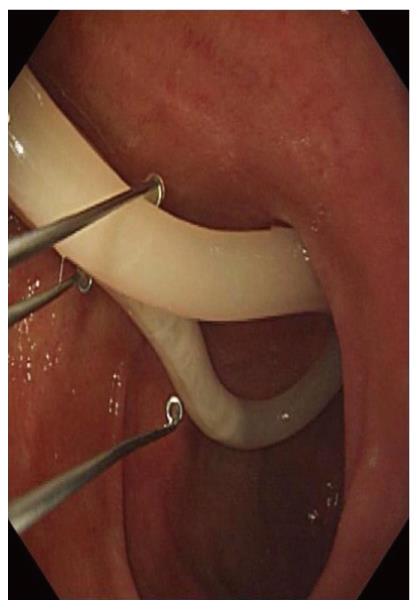 Figure 2 A live Ascaris worm appeared in the duodenal bulb, which was extracted with a grasper.

The patient reported a history of passage of worms in stools, and a history of eating raw vegetables. She received mebendazole for anthelmitnic treatment along with PPI therapy. The patient improved symptomatically during a 2-wk follow-up, and did pass 5-6 worms with feces. Repeated barium examination for upper gastrointestinal tract was unremarkable (Figure 3).

Ascaris lumbricoides, the largest intestinal nematode parasite of man, are commonly seen in rural areas of China, especially among people with poor hygienic conditions and/or having a habit of eating raw food. However, the prevalence of ascariasis has declined with improvement of sanitation and the application of pesticides and chemical fertilizers. The serious harm and complications of this round worm should be stressed. Ascaris larvae can cause transient eosinophilic pulmonary infiltrates (Loeffler’s syndrome) when they migrate through the lungs, which is characterized by pulmonary infiltrates and peripheral blood eosinophilia. Infection of adult Ascaris lumbricoides, which mostly inhabit the jejunum and ileum, usually presents with anorexia, nausea and vomiting, intermittent periumbilical pain, and malnutrition. More serious complications of Ascaris infection may occur when a large worm burden is present in the lumen of the intestine, such as intestinal obstruction, intussusception, volvulus or even gangrene. Intestinal hemorrhage[2] and perforation by Ascaris have also been reported, with the latter being able to lead to acute diffuse peritonitis or peritoneal granuloma[3]. In addition, Ascaris infection can cause allergic reactions, presenting with urticaria, skin itch, angioneurotic edema or even eosinophilic cholecystitis[4].

When the living environment becomes unfavorable such as gastrointestinal disease, hunger, fever, failed deworming therapy or impaction of a mass of worms in the intestinal lumen, adult Ascaris will try to enter into any orifice and advance into any channel leading off from it. Then various complications are encountered. The worms commonly enter the biliary or pancreatic ducts, causing cholecystitis, cholangitis, liver abscess, and pancreatitis. Ascaris may migrate into appendix as well, resulting in appendiceal colic and appendicitis. Ascaris has also been found in the lacrimal passage by being regurgitated into the nasolacrimal duct when they accidentally enter nasopharynx; in the air way causing mechanical asphyxia; and in the urethra and urinary bladder through vesico-intestinal fistulae or transanal migration causing urinary retention. Moreover, the emergence of an Ascaris from mouth, nostrils and external auditory meatus has been documented. Esophagus ascariasis is extremely rare, because the esophagus is not normal habitat of Ascaris as it prefers an alkaline environment and rarely travels from the jejunum and duodenum to the stomach (an acid environment) and then to esophagus.

The patient in our case is at high risk of ascariasis as she is from rural area and in favor of eating fresh vegetables. This old woman was admitted to the hospital due to dysphagia with an abnormal barium study of the esophagus. In Figure 1, we can find several high-density string shadows and globular shadows in the esophageal spherical filling defect, which actually are Ascaris worms. The most likely explanation in our case is that the worms were forced to migrate by gastroduodenal antiperistalsis, which is induced by eating too many red bean buns and haw jellies. Subsequently these worms became entangled with each other to form a small worm bolus in the alkaline esophagus, resulting in the symptom of dysphagia. The patient received treatment of soybean oil after admission, and she drank lidocaine hydrochloride mucilage before endoscopic examination, which relaxed the lower esophageal sphincter, possibly stimulating the worms. All of these measures induced the migration of the Ascaris bolus to the gastrointestinal tract. Therefore, the esophagus appeared normal except for some slight mucosal congestion on endoscopy. After anthelmintic therapy, more ascarides were passed out with feces, and a repeated barium study of upper gastrointestinal showed that the former defect filling had disappeared, which confirmed that the abnormal radiological appearance in the esophagus was a worm bolus. In a previous case[1] with similar radiographic appearance in the esophagus, the boy later vomited out six live Ascaris worms, and his esophageal lumen and mucosa were normal on the barium examination done the next day. Because of lack of exact causative factors in this case, we consider that children’s anatomically smaller intestine and larger worm loads caused the rapid transit of worms across the esophagus. This kind of anti-peristaltic migration of Ascaris is truly uncommon.

As our patient had a history of recurrent dysphagia and eating too many haw jellies before admission, we highly suspected that hiatal hernia combining with esophageal bezoar might cause this kind of space-occupying lesion at the beginning. However, bezoars rarely form in the esophagus and are often associated with structural and functional abnormalities of the esophagus, such as achalasia and hiatal hernia. Esophageal bezoar is also a complication of enteral feeding and the predisposing factors include mechanical ventilation, supine position, neurological diseases, diabetes mellitus, hypothyroidism, obesity and history of partial gastrectomy[5]. Therefore, we performed the gastrointestinal endoscopy to clarify the diagnosis. The unexpected result suggests that careful history-taking and complete examinations are necessary.

In conclusion, we reported a case of an old woman with esophageal ascariasis and discussed the possible causes. We often lack of awareness of Ascaris infection because of the dramatically decreasing incidence and several different and unspecific symptoms of this infection. This report also listed some other common and rare complications, and we would like to warn all medical workers that we should pay more attention to such a disease and reduce any misdiagnosis in the future work.