AIM: To clarify the efficiency of the criterion of metabolic syndrome to detecting non-alcoholic fatty liver disease (NAFLD).

METHODS: Authors performed a cross-sectional study involving participants of a medical health checkup program including abdominal ultrasonography. This study involved 11 714 apparently healthy Japanese men and women, 18 to 83 years of age. NAFLD was defined by abdominal ultrasonography without an alcohol intake of more than 20 g/d, known liver disease, or current use of medication. The revised criteria of the National Cholesterol Education Program Adult Treatment Panel III were used to characterize the metabolic syndrome.

CONCLUSION: Authors could determine NAFLD effectively in epidemiological study by modifying the usage of the criteria for metabolic syndrome.

Nonalcoholic fatty liver disease (NAFLD) is a common clinical condition with histological features that resemble those of alcohol-induced liver injury, but occurs in patients who do not drink an excessive amount of alcohol (ethanol > 20 g/d)[1,2]. This disease is often associated with obesity[3], type 2 diabetes mellitus[4,5], dyslipidemia[6], and hypertension[7]. Each of these abnormalities carries a cardiovascular disease risk, and together they are often categorized as the insulin resistance syndrome or the metabolic syndrome[8-15].

NAFLD is now considered to be the hepatic representation of the metabolic syndrome[10-15].

Conventional radiology studies used in the diagnosis of fatty liver include ultrasound (US), computed tomography, and magnetic resonance (MR) imaging. Other than these radiological studies, we have no sensitive and low invasive screening method for NAFLD. Alanine aminotransferase (ALT) > 30 IU/L was usually used as the cut off level of screening NAFLD[16,17]. This threshold had a sensitivity of 0.92 for detecting the fatty-fibrotic pattern proven by ultrasound among obese children[18]. However, ALT was within normal levels in 69% of those who had increased liver fat[19]. Similarly, in the Dallas Heart Study, 79% of the subjects with a fatty liver (liver fat content > 5.6%) had normal serum ALT[20]. This implies that a normal ALT does not exclude steatosis. Aspartate aminotransferase (AST) and gamma glutamyltransferase (GGT) also correlate with liver fat content independent of obesity[21], but are even less sensitive than serum ALT.

We performed a cross-sectional study involving participants of a medical health checkup program including abdominal ultrasonography. The program was conducted in the Medical Health Checkup Center at Murakami Memorial Hospital, Gifu, Japan. The purpose of the medical health checkup program is to promote public health through early detection of chronic diseases and the evaluation of their underlying risk factors. Known as a “human dock”, medical services of this kind are very popular in Japan.

Data collection and exclusion criteria were described previously[8]. In short, we collected the data from urinalysis, blood cell counts, blood chemistry and abdominal ultrasonography. The medical history and lifestyle factors were collected by using a self-administered questionnaire. Exclusion criteria were an alcohol intake of more than 20 g/d, known liver disease, or current use of medication which could influence the metabolic syndrome such as anti-diabetic drugs, anti-hypertensive drugs, anti-dyslipidemic drugs, anti-gout drugs, and/or anti-obesity drugs[8,10].

According to the revised National Cholesterol Education Program Adult Treatment Panel III (NCEP-ATPIII)[22] or the new International Diabetes Federation (IDF) definition[23], subjects who had three or more of the following criteria were diagnosed as having the metabolic syndrome. Fatty liver was defined on the basis of ultrasonographic findings[24]. Of 4 known criteria (hepatorenal echo contrast, liver brightness, deep attenuation, and vascular blurring), the participants were required to have hepatorenal contrast and liver brightness to be given a diagnosis of fatty liver[24].

The R version 2.9.0 (available from http://www.r-project.org/) was used for statistical analyses. Two groups of subjects were compared by using the unpaired t-test and the chi-square test, and a P < 0.05 was accepted as a significant level.

Association of NAFLD with gender difference, or body fat accumulation 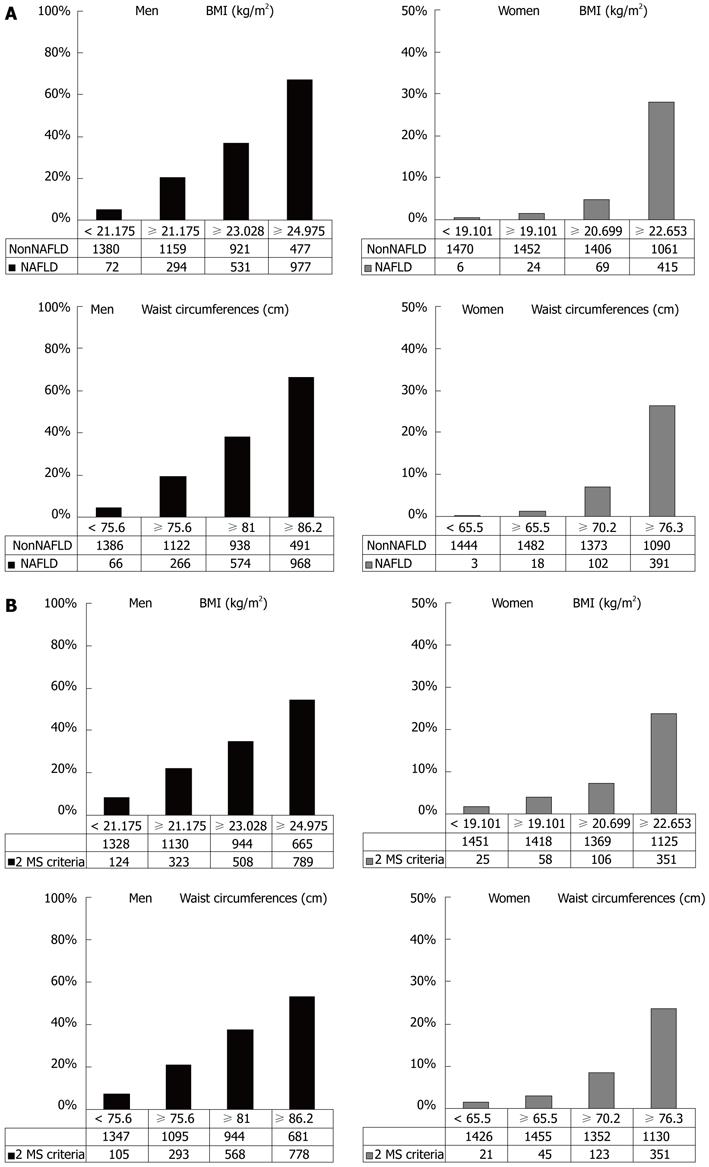 Although NAFLD was associated with obesity or body fat accumulation strongly, the population that was neither overweight (BMI ≥ 25 kg/m2) nor had elevated abdominal circumference was not small (Figure 2). Actually, 48.2% of men with NAFLD and 49.8% of women with NAFLD were not overweight (BMI ≥ 25 kg/m2). Similarly, 68.6% of men with NAFLD and 37.9% of women with NAFLD did not satisfy increased abdominal circumference classification. Half of the NAFLD group was classified as non-obese, but the prevalence of NAFLD among the non-obese population was lower. These facts means an effective method is needed to detect NAFLD among the non-obese population. Then, we separated the subjects into two groups, obese group or non-obese group, and investigated the efficacy of the criteria of metabolic syndrome for detecting NAFLD in each group. 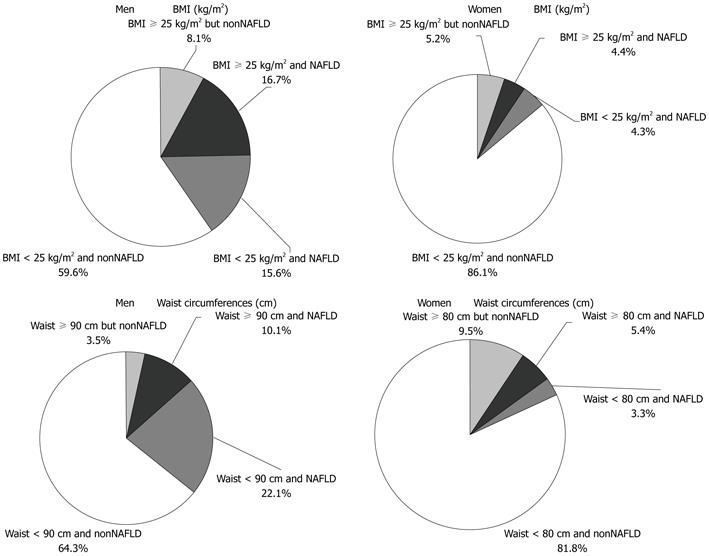 Next, we defined it as positive at screening for NAFLD when participants satisfied at least one or two components of metabolic syndrome. The sensitivity of the definition “at least 1 criterion” was 84.8% in men and 86.6% in women. Separating subjects with BMI, the sensitivity was higher in obese men and women than in non-obese men and women (92.3% vs 76.8% in men, 96.1% vs 77.0% in women, respectively). 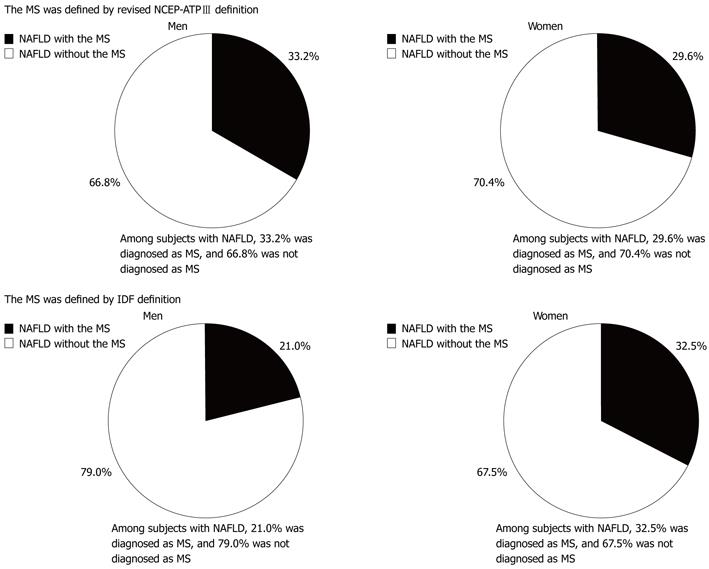 The result of our study means that we could identify NAFLD effectively in epidemiological study by modifying the usage of the criteria for metabolic syndrome. It is clinically critical evidence that a large part of patients with NAFLD were not diagnosed with the metabolic syndrome, when we used today’s definition for the metabolic syndrome. However, our subject population consisted only of Japanese, thus, the generalizability of our study to non-Japanese populations is uncertain. It is one of our study limitations that we used abdominal ultrasonography for diagnosing NAFLD, although the validation ultrasonography had a sensitivity of 91.7% and a specificity of 100%[24].

The impact of overlap between NAFLD and the metabolic syndrome has not been evaluated yet.

It is clinically critical evidence that a large number of patients with NAFLD were not diagnosed with the metabolic syndrome in a healthy Japanese population.

The authors could identify NAFLD effectively by modifying the usage of the criteria for metabolic syndrome.

It is a relatively large population study. The conclusion is consistent with recent observations showing the dissociation between NAFLD and other parameters of metabolic syndrome. The readers of this journal will be interested in the findings of this study.