AIM: To investigate whether Notch signaling is involved in liver fibrosis by regulating the activation of hepatic stellate cells (HSCs).

CONCLUSION: Notch3 may regulate the activation of HSCs, and the selective interruption of Notch3 may provide an anti-ﬁbrotic strategy in hepatic ﬁbrosis.

Hepatic fibrosis is a reversible wound-healing response characterized by the accumulation of extracellular matrix (ECM) to liver injury[1]. In the process of hepatic fibrosis, activated hepatic stellate cells (HSCs) synthesize a large amount of ECM and then change into myofibroblasts[2], which is characterized by the expression of α-smooth muscle actin (α-SMA) and ECM, particularly collagen I. Myoﬁbroblast is one of the key cellular components involved in liver ﬁbrosis, therefore, the majority of anti-ﬁbrotic therapies are designed to inhibit the activation, proliferation, or synthetic products of HSCs[3].

Notch signaling is an ancient cell signaling that regulates cell fate specification, stem cell maintenance, and initiation of differentiation in embryonic and postnatal tissues[4,5]. More recently, some researches reported that Notch signaling was implicated in human ﬁbrosis diseases, such as pulmonary, renal and peritoneal ﬁbrosis[6-8]. Several researches suggested that the Jagged/Notch pathway may selectively mediate fibrogenic properties of transforming growth factor-β1 (TGF-β1) which was essential to promote the production and deposition of ECM[9-11].

Notch receptors (Notch1, Notch2 and Notch4) were present at the mRNA level in freshly isolated HSCs, and the synthesis of Notch1 decreased during culture and development of HSCs into myofibroblast-like cells[12]. However, the expression of Notch3 in phenotype activated HSCs remains unknown. Ono et al[13] reported that Notch3 was required for TGF-β1-induced myofibroblastic differentiation of myoblasts. Based on the studies above, the present study was undertaken to investigate whether Notch3 was expressed in fibrotic liver tissues of patients with chronic active hepatitis and in activated HSCs, and sequentially contributed to liver fibrosis by regulating the activation of HSCs.

Cells were fixed in phosphate buffered saline (PBS) containing 4% paraformaldehyde at room temperature for 30 min and were penetrated in blocking solution (Amresco, United States) containing 0.3% Triton X-100, and incubated overnight with either anti-Notch3 (1:250), anti-α-SMA (1:100) or anti-collagen I (1:100) antibody in 1% BSA solution. Then, cells were incubated with secondary antibodies for 1 h at 37 °C. After incubation, cells were stained with nuclear stain marker 4’,6-diamidino-2-phenylindole. The reaction was examined under confocal microscope (Nikon, Japan).

Transfection of siRNA and plasmid

HSC-T6 was seeded into 6-well plates at a density of 1 × 105 cells 12 h before transfection. siRNA was mixed with 5 μL lipofectamine 2000 in 250 μL Opti-MEM I medium for 20 min. The transfection mixture was then added to each well with 1.5 mL FBS free DMEM at a concentration of 100 nmol/L. After 6-h incubation, liquid mixture containing siRNA was disposed. Two mL DMEM containing 10% FBS was added and incubated for another 72 h. The following siRNA sequences were used: Notch3 siRNA: 5’ ACAAGAUCAAUACAGGAGCTT 3’; the control siRNA sequence: 5’ UUGUAC UACACAAAAGUACUG 3’. These siRNA were synthesized by Shanghai Genepharma Co. Ltd. (Shanghai, China).

Total RNA from each sample was extracted using Trizol (Invitrogen) according to the manufacturer’s instructions. Real-time polymerase chain reaction (RT-PCR) was performed using a StepOne/StepOne-Plus (ABI) and the TaqMan PCR Reagent (Genepharma). Primer sequences are summarized in Table 1. Comparative threshold (Ct) method was used for calculating the relative amount of mRNA of treated sample compared with control samples.

Cells were washed with PBS and lysed. The extracts were cleared by centrifugation at 12 000 ×g for 15 min. After blocking with 5% non-fat milk in PBS containing 0.1% Tween 20 for 1 h at room temperature, membranes were incubated with either anti-Notch3 (1:1000), anti-α-SMA (1:300) or anti-collagen I (1:200) antibody in tris-buffered saline (TBS) containing 0.05% Tween 20 at 4 °C overnight. Then membranes were incubated with HRP-conjugated secondary anti-rabbit IgG (1:2000) antibody in TBS and Tween 20 for 1 h at room temperature, and visualized by chemiluminescence using an electrochemiluminescence immunoblotting kit (Cell Signaling Technology) with a digital luminescent image analyzer BioSpectrum600 (UVP, United States). Band intensity was assessed using Gel-Pro analyzer. 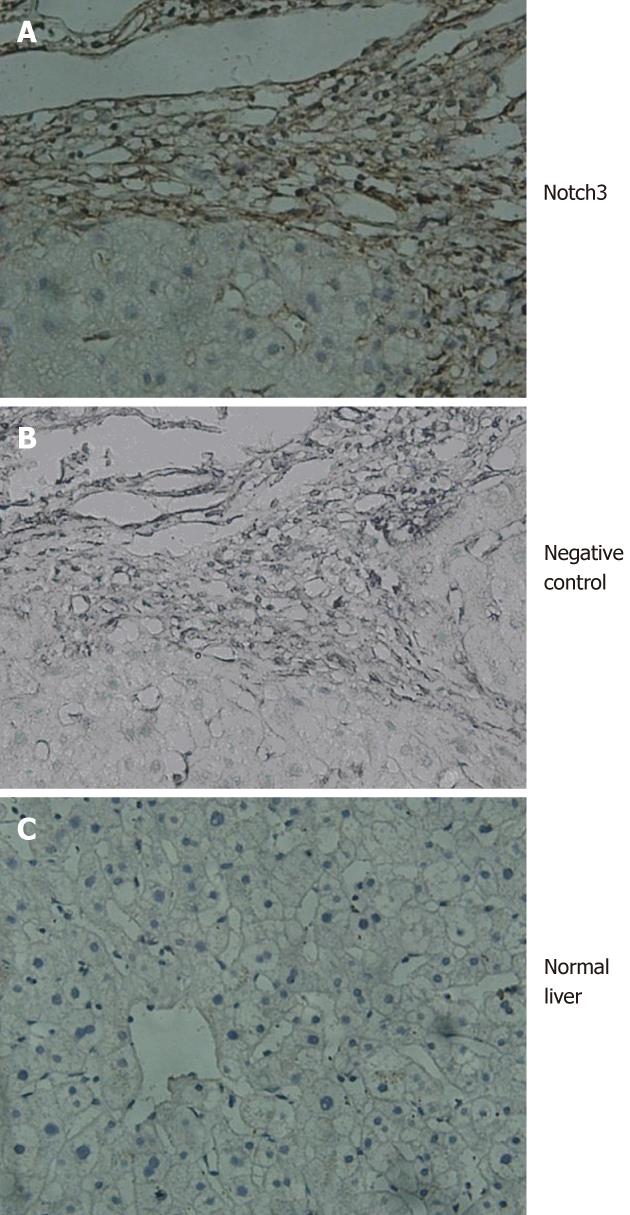 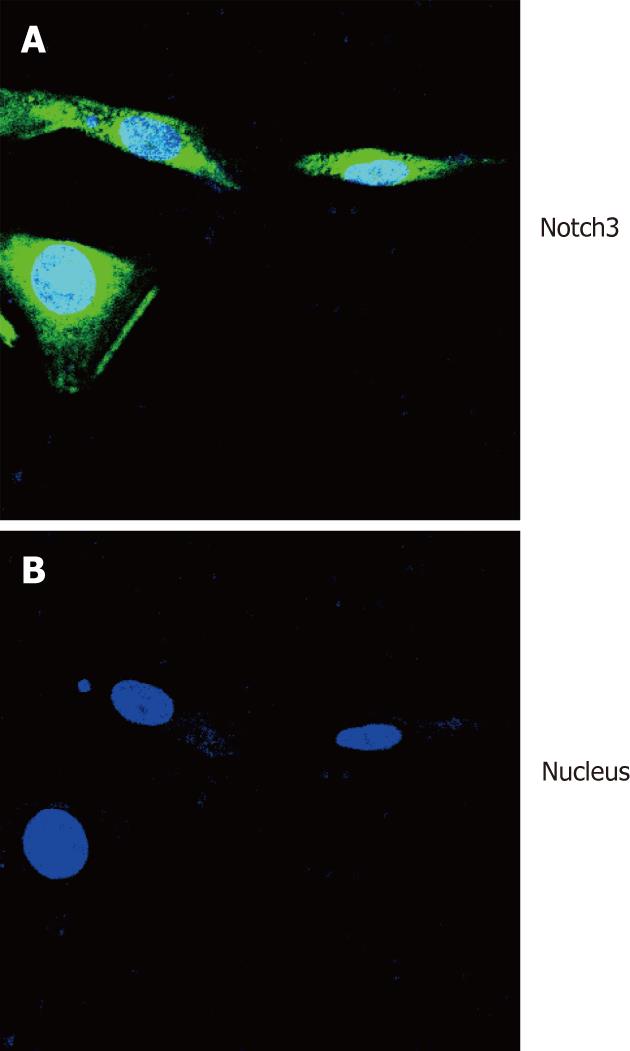 We investigated the effect of TGF-β1 on Notch signaling in HSC-T6 treated with TGF-β1 (0.5, 1, 2 and 4 ng/mL) for 24 h. RT-PCR analysis showed that the expression of Notch signaling components including Notch3, Jagged1 and Hes-1 were obviously increased in HSC-T6 treated with 2 ng/mL TGF-β1 as compared with the control group without TGF-β1 treatment (P < 0.05, Figure 3). 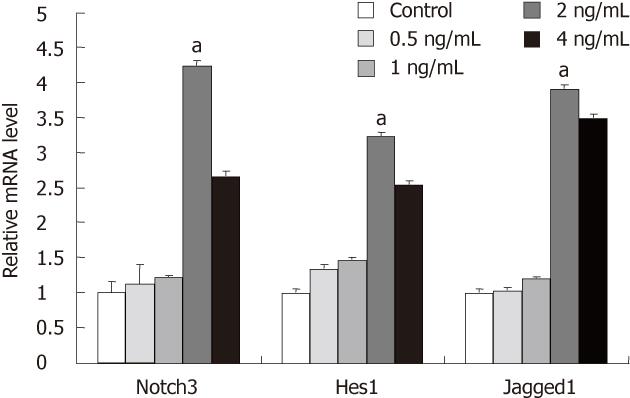 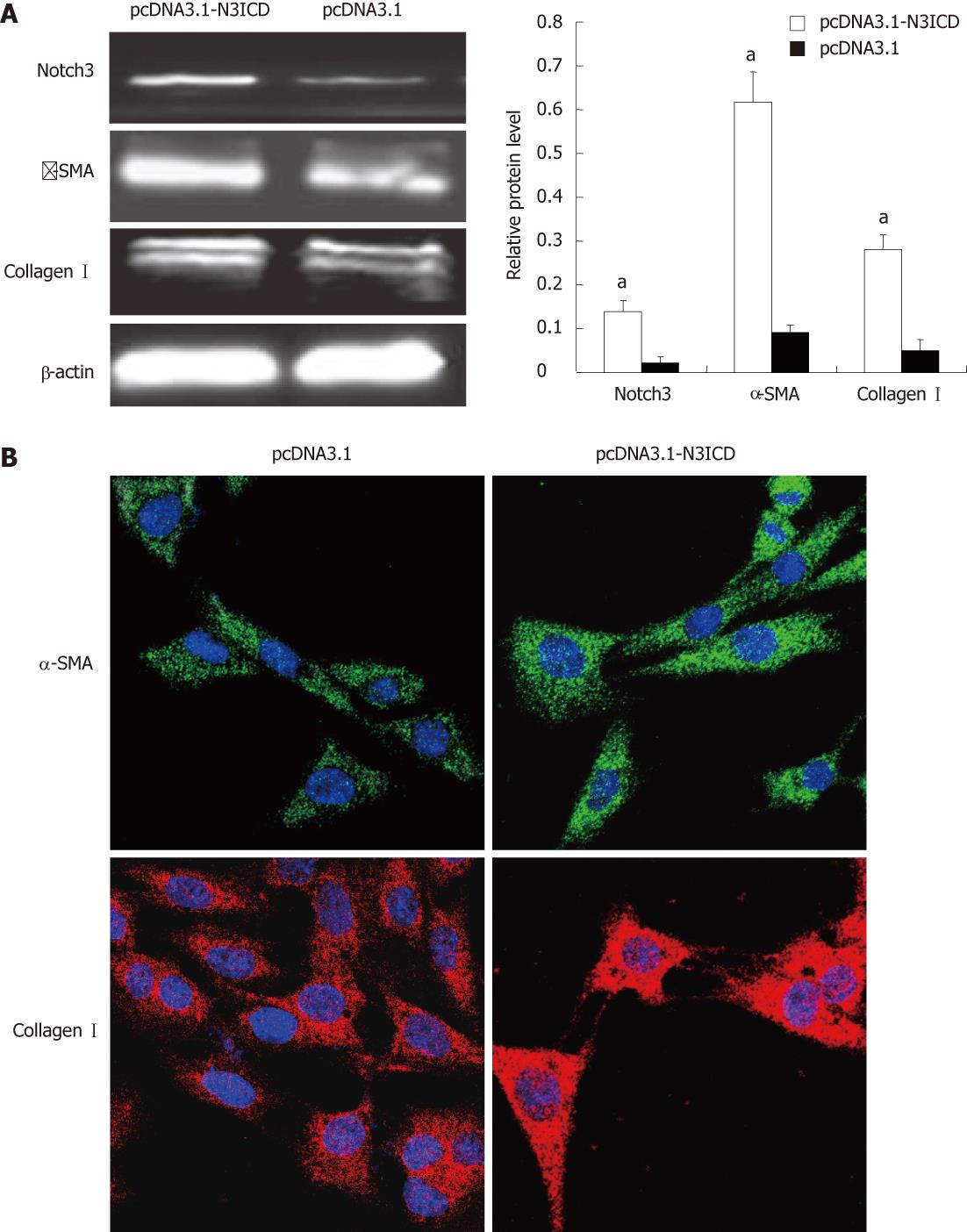 To further confirm the role of Notch3 in regulating activation of HSCs, siRNA was employed to speciﬁcally knockdown Notch3. Western blotting analysis showed that siRNAs targeting Notch3 reduced Notch3 protein levels by approximately 80%. Seventy and two hour after transfection in HSC-T6 (P < 0.05, Figure 5A). We also observed that knockdown of Notch3 in HSC-T6 down-regulated the expression of α-SMA and collagen I detected by Western blotting and immunofluorescence staining 72 h after siRNA transfection (P < 0.05, Figure 5A and B). 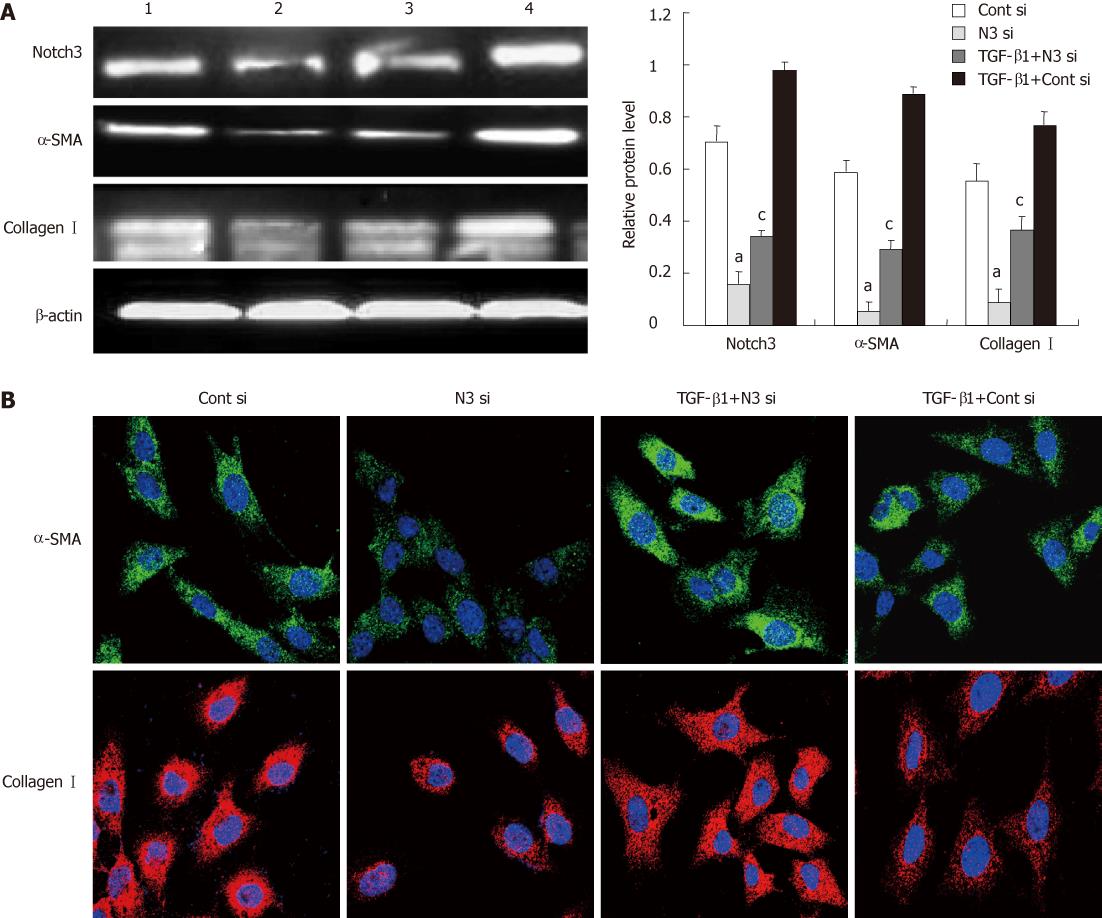 To investigate the relationship between Notch3 and TGF-β1, TGF-β1 (2 ng/mL) was added into HSC-T6 24 h before transfection with siRNAs targeting Notch3 or control siRNAs. Western blotting and immunofluorescence staining analyses demonstrated that knockdown of Notch3 antagonized TGF-β1-induced expression of α-SMA and collagen I in HSC-T6 (P < 0.05, Figure 5A and B).

Liver fibrosis is the result of the wound-healing response to repeated injury in liver. It is well known that HSCs activation plays an important role in ﬁbrosis because these cells become the primary source of extracellular matrix in liver upon injury. TGF-β1 is known to promote fibrogenesis in vivo and in vitro, however, development of anti-fibrotic strategies targeting the TGF-β axis is problematic owing to the pleiotropic nature of TGF-β action[1].

Notch signaling is an evolutionarily conserved local cell-signaling that functions in the determination of cellular identity during developmental stages[14]. Four Notch proteins (Notch1, Notch2, Notch3 and Notch4) have been identified in vertebrates, while membrane-bound proteins (Delta and Jagged) have been recognized as Notch ligands[15]. Activation of the pathway usually occurs via expression of the ligand in signal-giving cells. Upon interaction with the ligand, Notch undergoes a series of proteolytic cleavages in the signal-receiving cells. Finally, the cytoplasmic domain, referred to as the Notch intracellular domain (NICD), translocates to the nucleus, where it binds with the transcription factor CSL [CBF-1/RBP-Jk, Su (H) and Lag-1] and co-activator Mastermind-like to trigger downstream target genes expression, such as HES1 and HEY which act as transcription factors[16-20].

Notch signaling is essential for the regulation of cell differentiation, and its aberrant activation was implicated in human ﬁbrosis diseases. Notch1 signaling in response to inflammatory zone 1 may play a significant role in myofibroblast differentiation during lung fibrosis[6]. Active Notch pathway in tubular epithelial cells was demonstrated as a critical regulator of tubulointerstitial fibrosis[7]. It was reported that Notch signaling was highly activated in rats with fibrotic peritoneum induced by peritoneal dialysis fluid , as indicated by increased expression of Jagged1, Notch1, and HES1. Blocking Notch signaling activation by intraperitoneal injection of a γ-secretase inhibitor significantly attenuated peritoneal fibrosis as indicated by the decreased expression of α-smooth muscle actin and collagen I[8].

In this study, the Notch3 was not detected in normal liver tissues. In contrast, intense staining of the Notch3 was observed in fibrotic liver tissues of patients with chronic active hepatitis, which suggested that Notch3 was involved in liver fibrosis. Furthermore, several lines of evidence clearly confirmed that Notch3 contributed to liver fibrosis by regulating activation of HSCs. First, the expression of active Notch3 was found in the nucleus of HSC-T6. Second, the expression level of Notch signaling components was elevated including Notch3, Jagged1 and Hes1 in HSC-T6 after TGF-β1 treatment. More importantly, we also found that specific knockdown of Notch3 by siRNA antagonized TGF-β1-induced expression of myoﬁbroblastic marker α-SMA and collagen I in HSC-T6, and on the contrary, over-expression of Notch3 increased the expression of myoﬁbroblastic marker in HSC-T6.

Inhibition of the γ-secretase complex required for release of the active NICD is the most common method for targeting Notch signaling[21,22]. Two different inhibitors are being evaluated in clinical trials for the treatment of resistant T cell acute leukemia and advanced breast cancer (http://www.clinicaltrials.gov). However, targeting of γ-secretase would result in several adverse events when Notch receptors from Notch1 to Notch4 are affected[23,24]. In this study, we found that the selective interruption of Notch3 by siRNA decreased the expression of myoﬁbroblastic marker in HSC-T6 cells, which provided a potential novel therapeutic target for liver fibrosis.

However, further studies are required to elucidate how do other members of Notch family, such as Notch1, Notch2 and Notch4, play a part in activated HSCs as well as the mechanism underlying the Notch signaling in liver fibrosis. In addition, the contribution of Notch and TGF-β1 signaling to the liver fibrosis should also be further investigated.

In conclusion, we demonstrated for the ﬁrst time that Notch3 plays a role in regulating the activation of HSCs (HSC-T6). Therefore, the selective interruption of Notch3 may have a potential anti-ﬁbrogenic effect in liver fibrosis.

It is well known that hepatic stellate cell (HSC) activation plays an important role in ﬁbrosis because these cells are the primary source of extracellular matrix in liver upon injury. Notch signaling regulates many aspects of morphogenesis through diverse effects on differentiation, proliferation, and cell survival. Recently, some researches reported that Notch signaling was implicated in human ﬁbrosis diseases, such as pulmonary, renal and peritoneal ﬁbrosis.

This study was undertaken to investigate whether Notch signaling is activated in HSCs and sequentially contributed to liver fibrosis by regulating the activation of HSCs.

This is the first study to characterize the role of Notch signaling in liver fibrosis. This finding indicated that Notch3 may contribute to liver fibrosis by regulating the activation of HSCs.

This study showed that the selective interruption of Notch3 by siRNA decreased the expression of myoﬁbroblastic marker in hepatic stellate cell-T6 cells, which provided a potential novel therapeutic target for liver fibrosis.

This is a very interesting study aimed at investigating the role of the Notch signaling pathway in liver fibrosis. The text is generally well written, with structured abstract and organized sections. The manuscript has scientific value since it includes original information about a relevant topic.