CONCLUSION: Restless legs syndrome is prevalent in patients with IBS, especially those with diarrheal symptoms. Assessment of concomitant disorders may improve diagnosis and expand relevant treatment options for patients.

Irritable bowel syndrome (IBS) is a common gastrointestinal (GI) disorder that affects between 3% and 25% of the population in Western countries[1]. It is characterized by chronically recurring symptoms associated with alterations in bowel habits, which may be classified as constipation predominant (IBS-C), diarrhea predominant (IBS-D), or mixed symptom (IBS-M)[2,3]. Other symptoms include abdominal pain or discomfort, bloating, flatulence, straining, sensations of urgency, and incomplete evacuation[3]. Symptoms may fluctuate in severity and frequency, with some periods of remission[1]. The etiology of IBS is unknown, but multiple, possibly interrelated, pathophysiologic mechanisms may be involved, including psychological disturbances[1,2,4], genetic predisposition[1], alterations in inflammatory responses[2,4], visceral hypersensitivity[4], abnormal intestinal motility[3], alterations in neurotransmitter levels[2-4], and small intestinal bacterial overgrowth (SIBO)[2]. Small intestinal bacterial overgrowth in particular may be an important factor because of its impact on mucosal inflammation. Inflammation may lead to increased cytokine activity, increased motility, and the release of neurotransmitters such as 5-hydroxytryptamine (5-HT), thereby disrupting central and enteric nervous system crosstalk[4]. This may explain why IBS, which is associated with SIBO[5-8], is often comorbid with other sensitivity disorders, including fibromyalgia and interstitial cystitis[9-11].

Restless legs syndrome (RLS) is a common sensorimotor disorder[12] affecting 1% to 10% of the population[13]. It is clinically characterized as a compelling urge to move the legs that is often associated with discomfort, is worse during rest or inactivity, is relieved by movement, and is worse or only occurs in the evening or at night[12]. The etiology of RLS remains incompletely characterized[13,14]; however, dopaminergic dysfunction and altered control of iron homeostasis may contribute to the pathophysiology of RLS[13,14]. Studies have also linked RLS with GI disorders, including Crohn’s disease[15], celiac disease[16], and SIBO[17,18]. Further, a small observational study of patients with IBS and RLS (n = 13) demonstrated that RLS symptoms improved following antibiotic therapy for SIBO[18]. This study expounds on these observations by determining the prevalence of RLS in a large number of patients (n = 90) with IBS.

This observational clinical study was conducted in patients ≥ 18 years of age diagnosed with IBS according to Rome III criteria. Participants were recruited between March 2008 and February 2009 from a community-based gastroenterology center and administered rifaximin 200 mg three times daily for 14 d as empiric therapy for SIBO before diagnosis of RLS. Patients with scleroderma, diabetes mellitus, Parkinson’s disease, chronic kidney disease, hepatic encephalopathy, peripheral neuropathy, dysmotility disorder, high ferritin levels, or iron deficiency were excluded. Patients who were pregnant; who were taking dopamine antagonists, antidepressants, caffeine, alcohol, cocaine, or amphetamines; or who had used antibiotics 6 wk before enrollment were also excluded from the study. The study protocol, all protocol amendments, and the informed consent form were approved by the Central Institutional Review Board. All individuals provided written informed consent, and the study was conducted in accordance with ethical standards of the responsible committee on human experimentation and with the Helsinki Declaration of 1975.

Initial diagnosis of RLS was made via the use of a standard RLS questionnaire formulated by the International Restless Legs Syndrome Study Group[12]. The questionnaire was administered by medical students who were unaware of the study objective, and responses were interpreted by a gastroenterologist (i.e., Basu). Diagnosis of RLS was confirmed via polysomnography conducted by a sleep specialist at a single center using criteria established by the Association of Sleep Disorders Centers[19].

Ninety patients with IBS who met inclusion criteria and did not meet exclusion criteria were included in the study (Table 1). Of these patients, 30 (33%) displayed IBS-D, 30 (33%) exhibited IBS-C, and 30 (33%) presented with IBS-M. Initial diagnosis of RLS was established in 26 patients (29%) using the RLS questionnaire (Figure 1). Of these 26 patients, 24 (92%) underwent sleep study analysis to confirm RLS; two patients chose not to participate in this analysis and were excluded from the study. 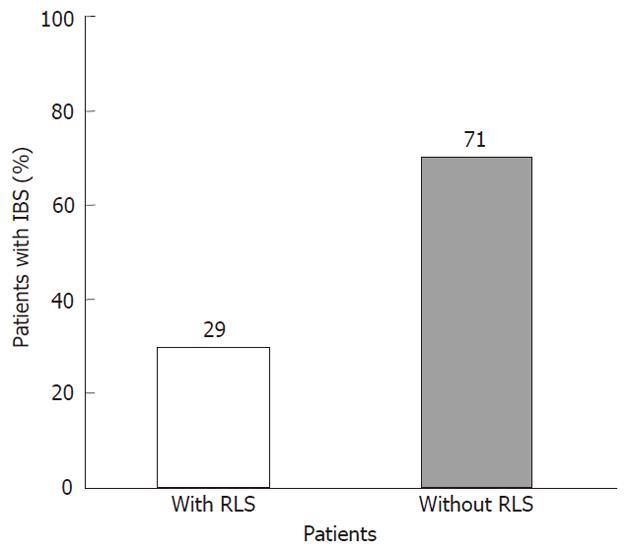 Polysomnography confirmed RLS during REM and non-REM phases in all patients tested (100%). Salient sleep disturbances other than RLS included wakefulness > 30% of sleep time (63%), sleep maintenance < 30% of sleep time (100%), and disruption of sleep onset (100%). Moderate (myoclonus time > 30-40 s) and mild (myoclonus time > 10-30 s) involuntary jerks of limbs not related to RLS were also noted in 50% and 25% of patients, respectively. Patients with RLS were more likely to have IBS-D than IBS-C or IBS-M (Figure 2). 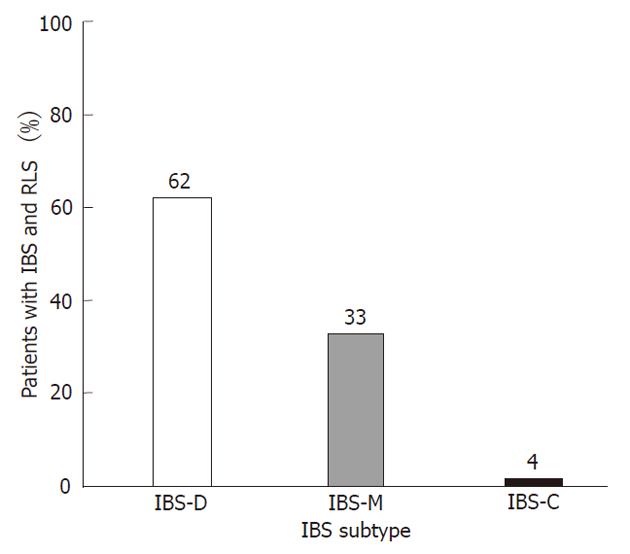 Irritable bowel syndrome is a common GI disorder with a sex-adjusted incidence rate of 196 cases per 100 000 people[1], which is associated with approximately 8 billion dollars per year in medical costs[4]. Individuals diagnosed with IBS take more time off work[20], spend more days in bed[20], and have an overall reduction in health-related quality of life compared with those without IBS[21]. Although the etiology of IBS is unknown, it has been associated with psychological factors such as anxiety[22] and verbal or emotional abuse[23], as well as with sleep disturbances[24]. Furthermore, alterations in GI motility (e.g., the migrating motor complex)[25,26] and GI flora (e.g., SIBO)[5,6,8] have been described in patients with IBS. Taken together, these data suggest disruption of communication between the central and enteric nervous system in IBS, which may explain the comorbidity of IBS with other sensory disorders[9-11,18].

This study demonstrated that RLS was a comorbid condition with IBS in 26 of 90 patients (29%). This finding adds support to previous studies examining the prevalence of RLS in patients with intestinal disorders. In a study of 161 patients with an abnormal lactulose breath test indicative of SIBO, 19 patients (12%) perceived themselves to have RLS[18]. Of these, 11 patients (58%) were confirmed to have RLS by the Johns Hopkins validated interview process. The prevalence of RLS in patients with celiac disease or Crohn’s disease has also been examined, with 35% (30 of 85) and 43% (93 of 218) of patients reporting comorbid RLS, respectively[15,16].

The mechanism underlying these comorbidities remains unknown, but the disruption of enteric and central nervous system communication because of alterations in inflammatory mediators and neurotransmitters triggered by SIBO has been implicated[4]. It has been suggested that an excess of sulfate-reducing bacteria may lead to increases in hydrogen sulfide, which may act as a gaseous neurotransmitter[11]. In addition, inflammation may lead to increased cytokine activity and altered release of 5-HT[4]. This may explain why both the 5-HT antagonist alosetron and the minimally absorbed antibiotic rifaximin are effective in relieving IBS symptoms. Interestingly, rifaximin in combination with tegaserod (a prokinetic agent) and zinc reduced symptoms of RLS in patients with SIBO[18], and treatment of 2 patients with RLS with tandospirone (a 5-HT1A-receptor agonist) relieved RLS symptoms[27]. The results presented herein suggest that factors in addition to SIBO may play a role in RLS because SIBO was eliminated in patients by prophylactic treatment with rifaximin before RLS diagnosis. Together, these studies suggest involvement of SIBO, altered neurotransmission, and other factors in the pathophysiology of RLS.

In conclusion, this study contributes to the available literature supporting an association between IBS and RLS. Screening of patients with IBS for RLS, or vice versa, may permit more accurate diagnosis based on revelation of potentially undisclosed symptoms. Concomitant diagnosis of these disorders may enhance treatment options for patients, given that some medications may provide relief for both conditions. Further investigations to determine the underlying mechanisms common in both disorders are needed to address the causality of this connection.

Editorial assistance was provided under the direction of the authors by MedThink Communications with support from Salix Pharmaceuticals, Inc.

Irritable bowel syndrome (IBS) is a common gastrointestinal disorder characterized by abdominal pain or discomfort, bloating, flatulence, straining, urgency and incomplete evacuation. The pathophysiologic mechanisms underlying this disease are incompletely understood, but alterations in gastrointestinal and systemic inflammatory responses have been implicated. Disruption of inflammatory processes has also been associated with restless legs syndrome (RLS), a sensorimotor disorder associated with a compelling urge to move the legs that is relieved with movement and may result in sleep disruption. This prevalent disease has been associated with a variety of inflammation-related gastrointestinal disorders including Crohn’s disease, celiac disease, and small intestinal bacterial overgrowth, which have also been linked with IBS.

Although common, RLS may be underdiagnosed because primary care physicians may be unaware of the manifestations of RLS and the impact these symptoms may have on patient quality of life. Identification of certain patient populations at risk for RLS may aid primary care physicians in recognizing and treating patients with RLS symptoms. In this study, the prevalence of RLS was evaluated in patients with IBS.

The results suggest that RLS is a common comorbid condition in patients with IBS, particularly in patients with diarrhea-predominant IBS. In addition, patients with RLS and IBS had sleep disturbances unrelated to RLS, suggesting that IBS may be a contributing factor in sleep disorders in general.

Based on these results, primary care physicians treating patients with IBS should be cognizant of patient reports of trouble sleeping and conditions that may be associated with poor sleep, such as difficulty concentrating. Furthermore, given the association of RLS with inflammatory gastrointestinal disorders including IBS, treatment and resolution of such disorders may be beneficial for patients with RLS.

This is a straight-forward and well-written paper describing the association of RLS with IBS, in particular diarrhea-predominant IBS.