AIM: To assess the application of the Kasai procedure in the surgical management of hilar bile duct strictures.

METHODS: Ten consecutive patients between 2005 and 2011 with hilar bile duct strictures who underwent the Kasai procedure were retrospectively analyzed. Kasai portoenterostomy with the placement of biliary stents was performed in all patients. Clinical characteristics, postoperative complications, and long-term outcomes were analyzed. All patients were followed up for 2-60 mo postoperatively.

RESULTS: Patients were classified according to the Bismuth classification of biliary strictures. There were two Bismuth III and eight Bismuth IV lesions. Six lesions were benign and four were malignant. Of the benign lesions, three were due to post-cholecystectomy injury, one to trauma, one to inflammation, and one to inflammatory pseudotumor. Of the malignant lesions, four were due to hilar cholangiocarcinoma. All patients underwent Kasai portoenterostomy with the placement of biliary stents. There were no perioperative deaths. One patient experienced anastomotic leak and was managed conservatively. No other complications occurred perioperatively. During the follow-up period, all patients reported a good quality of life.

CONCLUSION: The Kasai procedure combined with biliary stents may be appropriate for patients with hilar biliary stricture that cannot be managed by standard surgical methods.

Radical resections were performed for all malignant hilar lesions. For benign lesions, hilar bile duct dissection was performed, and healthy, non-scarred ducts were exposed for reconstruction. The hepatic quadrate lobule was removed at the level of the hilar plate to expose adequately the bile ducts. A Roux-en-Y portoenterostomy was performed. The afferent limb was approximately 50 cm, which was secured to the hepatic parenchyma, which surrounded the transected hepatic ducts, with 4-0 absorbable braided suture. Fine silicone catheters were used as intrahepatic duct stents to minimize the risk of bile duct restenosis. These were externalized through the stump of the intestinal Roux-en-Y loop and left in situ for 5 mo. Intra-abdominal drainage catheters were routinely placed at the anastomosis. 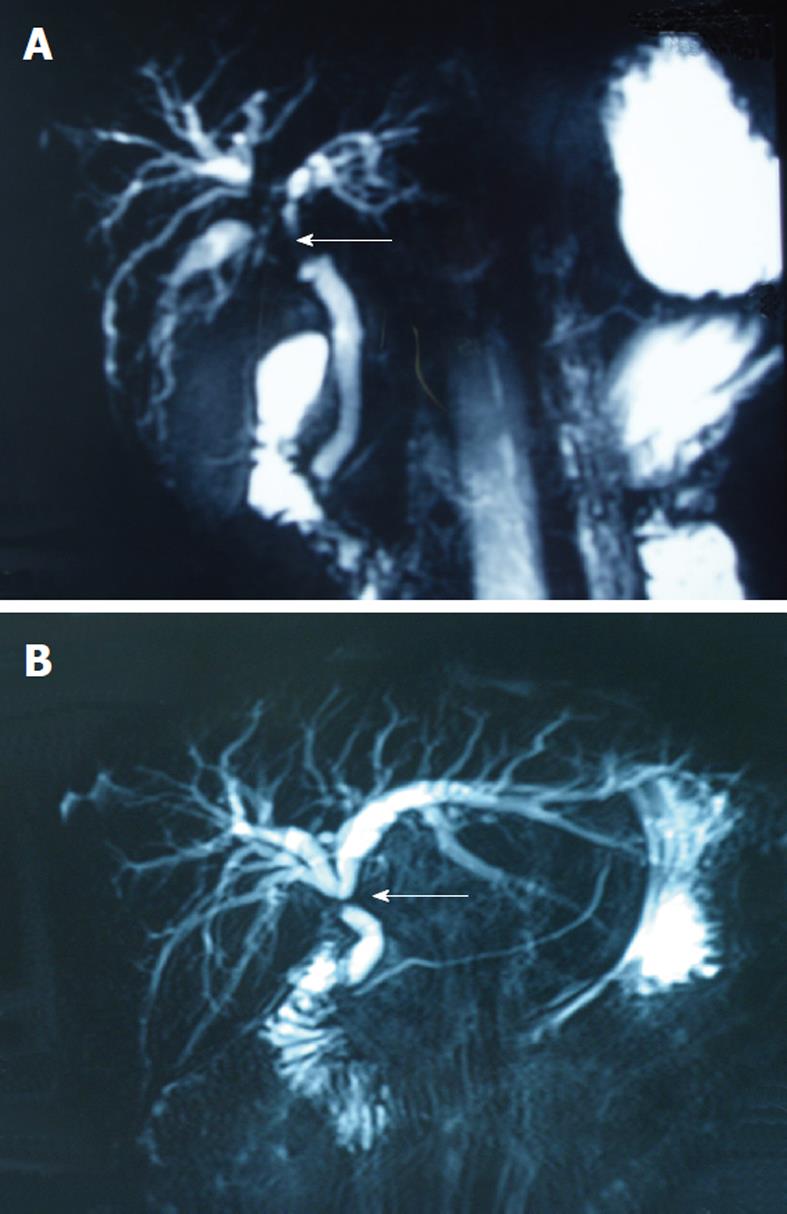 There were no perioperative deaths. One patient experienced a postoperative anastomotic leak and was successfully managed conservatively with drainage and antibiotics. The liver functions of patients were returned to normal postoperatively. Surgical margins at the bile duct cut surfaces were clear in all four patients with hilar cholangiocarcinoma. No other complications such as hemorrhage, abdominal abscess, and wound infection were noted during the perioperative period.

All patients were followed up for a median period of 25.3 mo (range: 2-60 mo). All patients reported a good quality of life. No recurrence or metastasis was found in patients who underwent the Kasai procedure for malignant lesions. Moreover, cholangitis, anastomotic stricture, and cholelithiasis were not observed in any patients.

Surgical treatment of hilar bile duct strictures is one of the most challenging areas for hepatobiliary surgeons due to the anatomic complexity and diversity of lesions. Moreover, inappropriately managed biliary strictures can predispose patients to recurrent cholangitis, jaundice, and biliary cirrhosis, which requires additional surgical procedures[6].

Exposure of the proximal bile duct of hilar stricture remains the key to success in the repair of hilar biliary strictures. Some approaches are recommended to expose the hilar bile ducts, such as the hilar and transhepatic approaches[11,12]. The hilar approach involves lowering the hilar plate to expose the bile duct confluence, to manage the lesion extrahepatically. It is very difficult to expose the second- and third-order branches of the intrahepatic bile duct. The transhepatic approach involves exposing the hilar bile ducts by transecting the liver parenchyma between the left and right lobes of the liver. Although this approach can provide excellent surgical visualization, it requires more elaborate and complex skills, and is high risk. In this study, we performed a concomitant quadrate lobectomy to expose the hilar bile duct. We first dissected the hilar plate and hepatoduodenal ligament to evaluate the lower margin of the lesion, and assessed the portal vein and hepatic artery for tumor invasion. We routinely resected the base of quadrate lobe to visualize the bile duct confluence. Lastly, adequate exposure of the bile ducts could not be obtained, therefore, we resected more of the quadrate lobe between the gallbladder bed and the round ligament, to improve exposure of the hilar ducts, including the second- and third-order branches. Adequate exposure of the hilar bile ducts was obtained in all patients.

In recent years, biliary stenting has become a new technique for the treatment of biliary strictures. The major advantages are that the procedure used to place them is minimally invasive and well tolerated. It was first applied as palliative treatment in patients with unresectable malignant strictures. Previous studies have shown that patients undergoing stent placement for malignant strictures have a significant improvement in abdominal comfort, jaundice, and quality of life. The application of biliary stents as palliative treatment of biliary malignancies is a widely accepted practice[13,14]. With advances in stent material and the technical process of stent placement, many reports have described their use for treatment of benign biliary strictures[15-17]. However, complications of stent placement, such as stent occlusion and cholangitis limit their use in benign strictures. Both the requirement for and duration of stenting for benign strictures have been controversial for many years. Siriwardana and Siriwardena have reported a systematic appraisal of the current status of the use of metallic endobiliary stents in the treatment of benign biliary strictures[18]. They have demonstrated that, although stents can be deployed endoscopically or radiologically with relative ease and with a low procedure-related complication rate, there is a critical lack of data on long-term patency. Thus, currently, metallic endobillary stents should not be used for benign strictures in patients with a predicted life expectancy of > 2 years. In our study, six patients with benign hilar strictures underwent the Kasai procedure. All patients had a good outcome during follow-up. Therefore, the Kasai procedure may be a good alternative for patients with benign hilar strictures.

The Kasai procedure is a portoenterostomy perfor-med by suturing a jejunal loop to the hepatic parenchyma that surrounds the transected hepatic ducts. Direct mucosa-to-mucosa anastomosis is not required. Anastomotic leak and stricture are the most common postoperative complications. To prevent or lessen the probability of postoperative stricture and bile leak, we routinely placed transanastomotic catheters in the bile ducts, which were externalized through the intestinal Roux-en-Y loop. In our study, all 10 patients underwent the Kasai procedure with transanastomotic stents, and no anastomotic stricture was observed during follow-up. Transanastomotic catheters not only limit the tendency to stricture, but also serve to decompress the biliary system and provide access for radiographic imaging in the perioperative period[19]. Innes et al[20]have suggested that a bilioenteric anastomosis to manage benign stenosis of the biliary tract might be undertaken without placing stents, which promises low postoperative morbidity and excellent obstruction-free long-term results. Although the use of postoperative transanastomotic stenting tubes is controversial, we recommend their use when the Kasai procedure is being performed.

Surgical management of hilar bile duct stricture is a great challenge because of the complexity of the perihilar anatomy and the diversity of the lesions.

This study may help surgeons to choose the Kasai procedure as an appropriate procedure to deal with complicated hilar bile duct strictures.

The Kasai procedure is a hepaticoportoenterostomy, which is performed by suturing a jejunal loop to the hepatic parenchyma that surrounds the transected hepatic ducts.

This is a small case series that describes the use of hepatic portoenterostomy in adults for the reconstitution of biliary-enteric continuity when mucosal to mucosal hepaticojejunostomy is not feasible. Although this is not a new concept, it is an important technique that is occasionally used by hepatobiliary surgeons. Because the literature describing this technique is scarce, this article should be published.