AIM: To investigate whether bile duct angulation and T-tube choledochostomy influence the recurrence of choledocholithiasis.

METHODS: We conducted a retrospective study inclu-ding 259 patients who underwent endoscopic sphincterotomy and cholecystectomy for choledocholithiasis between 2000 and 2007. The imaginary line was drawn along the center of the bile duct and each internal angle was measured at the two angulation sites of the bile duct respectively. The values of both angles were added together. We then tested our hypothesis by examining whether T-tube choledochostomy was performed and stone recurrence occurred by reviewing each subject’s medical records.

CONCLUSION: The bile duct angulation and T-tube choledochostomy may be risk factors of recurrence of bile duct stones.

Since its introduction in 1974, endoscopic sphincterotomy (EST) has become a well established therapeutic method for the extraction of common bile duct (CBD) stones[1,2]. In previous studies of EST, 4%-24% of patients experienced recurrent CBD stones during follow-up intervals of up to 15 years[3-5]. The suggested causes of recurrent bile duct stones after EST are bile duct inflammation, papillary stenosis, dilated common bile duct, peripapillary diverticulum, reflux of the duodenal contents into the bile duct, and foreign bodies within the bile duct[6,7]. After EST, the biliary sphincter is rendered permanently insufficient[8]. The loss of this physiologic barrier between duodenum and biliary tract results in duodenocholedochal reflux and bacterial colonization of the biliary tract[9,10]. The presence of bacteria in the biliary system might lead to late complications after EST. These complications may include recurrence of CBD stones from deconjugation of bilirubin by bacterial enzymes[11], inflammatory changes of the biliary and/or hepatic system[12,13], recurrent ascending cholangitis[14], and even malignant degeneration[13,15].

Bile stasis may be one of the possible mechanisms of stone recurrence[16]. If bile flow can be decreased by the bile duct angulation, it may be a risk factor of stone recurrence. In a previous study, it was disclosed that in treatment of CBD stones, a T-tube drainage group had a higher recurrence rate of stones than either a choledochoduodenostomy group or an EST group, although their accurate mechanism was not elucidated[17]. It was also reported that the angulation of the extrahepatic bile duct-so called “the elbow sign”-occurred as a sequela of T-tube drainage[18]. Therefore, we investigated whether draining the T-tube changes configuration of the extrahepatic bile duct significantly and then whether bile duct deformity affects recurrence of CBD stones.

All patients who were treated for choledocholithiasis by means of endoscopic retrograde cholangiopancreatography (ERCP) with EST between January 2000 and December 2007 in our institution were recruited. Their medical records were retrospectively reviewed. Among them, patients who met the following criteria were selected: (1) complete clearance of the bile duct stones was achieved; (2) cholecystectomy performed; (3) absence of bile duct stricture; (4) absence of concurrent hepatolithiasis; (5) absence of coexisting malignant neoplasm; and (6) absence of coexisting severe medical disease. Consequently, in total 259 patients were enrolled in the study.

For all the patients, the following data were collected: gender, age, recurrence, presence of periampullary diverticulum, maximal CBD diameter and presence of T-tube drainage. We divided them into two groups; recurrent and non-recurrent groups, and the sum of extrahepatic bile duct angles and maximal CBD diameter between both groups was compared. EST was performed completely by traction-type or needle-knife sphincterotome and the bile duct stones were extracted with basket and/or stone-retrieval balloon catheters. After extraction of CBD stones, we performed a regular check-up on each patient at the outpatient department base, and considered absence of symptoms of biliary colic or cholangitis episode as absence of recurrence by using telephone interviews in patients who were missed.

There were films of acceptable quality, taken in the prone position during ERCP. When the exrahepatic bile duct was deformed, the number of its angulation site was one or two in most patients. The angles were measured at the intersection of imaginary lines drawn down the center of the bile duct. Its intersection did not necessarily occur within the lumen of the duct, particularly where angulation took the form of a gentle curve. Each internal angle was measured at the two angulation sites of the proximal and distal bile duct level respectively by one experienced radiologist (Figure 1). The values of both angles were added together to estimate the grade of angulation. The smaller sum of angles implies more angulation. 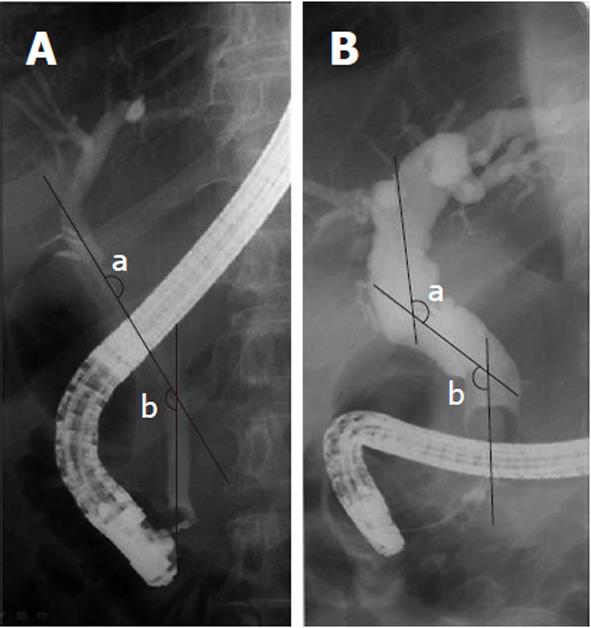 Figure 1 Cholangiographic configuration of (A) usual extrahepatic bile duct and (B) deformed bile duct. The imaginary line was drawn along the center of the bile duct and each internal angle was measured at the angulation of the proximal (a) and distal (b) bile duct level respectively. The values of both angles were added together (a + b).
T-tube choledochostomy 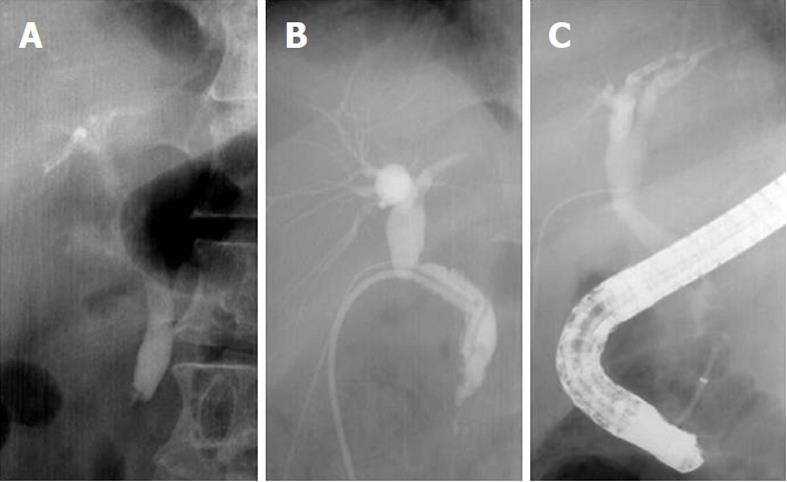 Categorical variables (gender, presence of periampullary diverticulum and presence of T-tube drainage) were compared by chi-square test or Fisher exact test. Continuous variables (age, CBD diameter, sum of angle) were analyzed using the Student t test when the variables were normally distributed or by using the Mann Whitney U test for non-normal distribution. Significant predictors for choledocholithiasis recurrence identified by univariate analyses were included in a multiple logistic regression model to determine the most significant risk factors for recurrence of the bile duct stones. For multivariate analysis, we categorized continuous variables into two subgroups: age (< 65 years vs≥ 65 years), sum of angle (< 270°vs≥ 270°), and maximal transverse CBD diameter (< 13 mm vs≥ 13 mm).

The mean value of sums of angles at the cholangiogram before T-tube choledochostomy was 311.7°± 22.4°

ERCP with EST is the therapeutic procedure of choice for CBD stones. Early complications of EST include acute pancreatitis, bleeding, duodenal perforation, and acute cholangitis. On the other hand, its late complications include recurrence of stones and papillary stenosis[19,20]. In long-term follow-up studies after EST, the recurrence rate of CBD stones in patients with cholecystectomy has been in the range of 4% to 24%[3-5]. However, the theory that loss of sphincter function after EST leads to formation of recurrent CBD stones seems to need validation. Several authors have demonstrated that the biliary tree becomes infected with bacteria after EST[9,10] and there is substantial evidence that bacteria play an essential role in the formation of brown pigment stones. Some bacterial species, especially Escherichia coli[21], produce enzymes such as β-glucuronidase that are known to precipitate bilirubin and calcium[11], the main components of brown pigment stone[22]. Furthermore, electron microscopy studies have demonstrated that bacteria are present in the core of brown pigment stone whereas they are absent in cholesterol and black pigment stone[14,23,24].

Previous studies of the peripapillary diverticulum in relation to recurrence of bile duct stone have disclosed inconsistent results[28-31]. Biliary stasis in patients with diverticulum could be caused by either mechanical factors or the presence of coexisting motility disorders involving the sphincter of Oddi[28-31]. Theoretically, the effect of the diverticulum on bile flow might not completely disappear after the EST. In our study, the recurrence rate of the diverticulum group (n = 112, 13.4%) was higher than that of the non-diverticulum group (n = 119, 6.7%), but the result was not statistically significant (P = 0.91). Hence further studies on periampullary diverticulum as a risk factor of stone recurrence might be needed.

Bile duct angulation may cause stasis of bile flow. Warren suggested that angulation of CBD is associated with choledocholithiasis[32]. Mean cholangiographic angulation of CBD differed significantly between patients with cholelithiasis only and those with choledocholithiasis in this previous series. The degree of ductal angulation may be a useful consideration in development of bile duct stones. Recently two reports showed angulation of the CBD contributes to biliary stasis, and hence predisposes to recurrent choledocholithiasis[33,34]. In the current study, the recurrence group (n = 24, mean of sums of angles = 268.3°± 29.6°) was more angulated in the extrahepatic bile duct than the non-recurrence group (n = 235, mean of sum of angles = 314.9°± 20.0°) (P < 0.05). In multivariate analysis, the sum of angles was the only independent risk factor of CBD stone recurrence (Table 2).

There was a previous study describing long-term results of medical or surgical treatment in patients with choledocholithiasis[17]. Two hundred and thirteen patients were treated for CBD stones, and then the patients were divided into 3 groups based on the treatment modality: group 1, choledocholithotomy and T-tube choledochostomy; group 2, choledochoduodenostomy; and group 3, endoscopic sphincterotomy. Recurrence of choledocholithiasis was examined for each type of treatment modality. This study suggested that patients treated by T-tube drainage had more recurrent bile duct stones than those in the choledochoduodenostomy or EST groups, but accurate mechanisms were not clearly demonstrated.

Our study has some limitations. First, this study is retrospective. Second, we did not prove recurrence with repeat ERCP or cholangiogram in every patient. It may have ascertainment bias. Third, we should estimate the three dimensional image, but we measure bile duct angulation by two-dimensional fluoroscopic imaging. This may show some difference from real angulation. Practically, it is difficult to get three dimensional bile duct images. Fourth, there may be several possible confounders which we did not consider. Medication such as ursodeoxycholic acid and the time of drainage of contrast from the bile duct were not reported in our series. On account of these limitations, it is difficult to be absolutely certain that our specific risk factors were solely responsible for the recurrence of choledocholithiasis.

In conclusion, subsequent to endoscopic biliary sph-incterotomy and clearance of bile duct stones, three significant risk factors for the recurrence of the stone were identified on univariate analyses, although bile duct angulation was the only risk factor for recurrence of choledocholithiasis in the multivariate analysis. Patients with a more angulated and dilated bile duct, and a history of T-tube choledochostomy developed stone recurrence more frequently. T-tube choledochostomy performed after cholecystectomy were prone to recurrence of stones by an influence on bile duct angulation.

After endoscopic sphincterotomy (EST), 4%-24% of patients might experience recurrent choledocholithiasis. The risk of stone recurrence is an important issue, especially for relatively young patients. Bile duct angulation may be a risk factor of stone recurrence by decreasing bile flow.

The risk factors for true recurrence of bile duct stones after EST are suboptimally defined. Until now, infection along the bile duct and bile stasis were thought to contribute to the recurrence.

Recent several studies showed the association between bile duct angulation and recurrence of stones. The authors added more information about that. In addition, the authors suggested that T-tube choledochostomy influences the recurrence of choledocholithiasis by angulating the bile duct.

This article provides important data about the risk factors of choledocholithiasis recurrence. By identifying risk factors for stone recurrence, people can improve outcomes by prophylactic treatments or earlier intervention.