We report an extremely rare case of gas-filled abdominal mass caused by an ovarian teratoma fistulating to the sigmoid colon. The patient was an 85-year-old female, who presented with severe abdominal distension. Urgent computed tomography scan showed a huge abdominal mass with air fluid level and fecal matter inside. Communication between the mass and the sigmoid colon was suspected. She underwent emergency laparotomy. The mass was resected with the involved segment of colon. Pathology confirmed squamous cell carcinoma arising from mature cystic teratoma of the ovary.

Abdominal distension is one of the most common presenting symptoms encountered in general surgery. Although there are numerous differential diagnoses, most of the diagnoses would become apparent after radiological workup. We report here a very interesting and extremely rare cause of abdominal distension, which posed a great diagnostic challenge.

An 85-year-old lady was known to have had a sizable cystic lesion of undetermined nature for more than 40 years, causing abdominal distension. Though surgical excision was once offered, she refused intervention and defaulted clinic follow-up.

On this occasion, 7 years after default, she presented to the Accident and Emergency Department for severe abdominal pain and fever. She had experienced progressive constipation and weight loss for 6 mo prior to the presentation and had become homebound. Physical examination revealed a frail, malnourished lady with a very tense and tender abdomen. Abdominal X-ray (Figure 1) showed a well demarcated gas-filled spherical shadow. Contrast-enhanced computed tomography (CT) scan showed a huge gas-filled abdominal mass occupying the whole abdomen and pelvis, with fecal matter inside (Figure 2A). Direct communication between the mass and the left-sided colon was demonstrable on sagittal-reformatted image (Figure 2B). Based on the radiological features, giant colonic diverticulum and duplication cyst of colon were suspected. 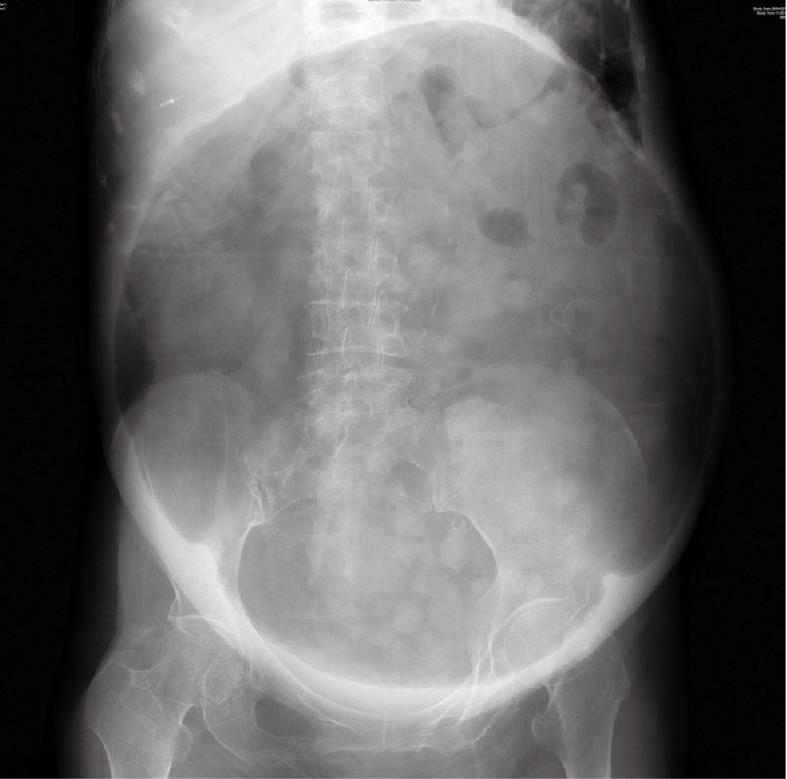 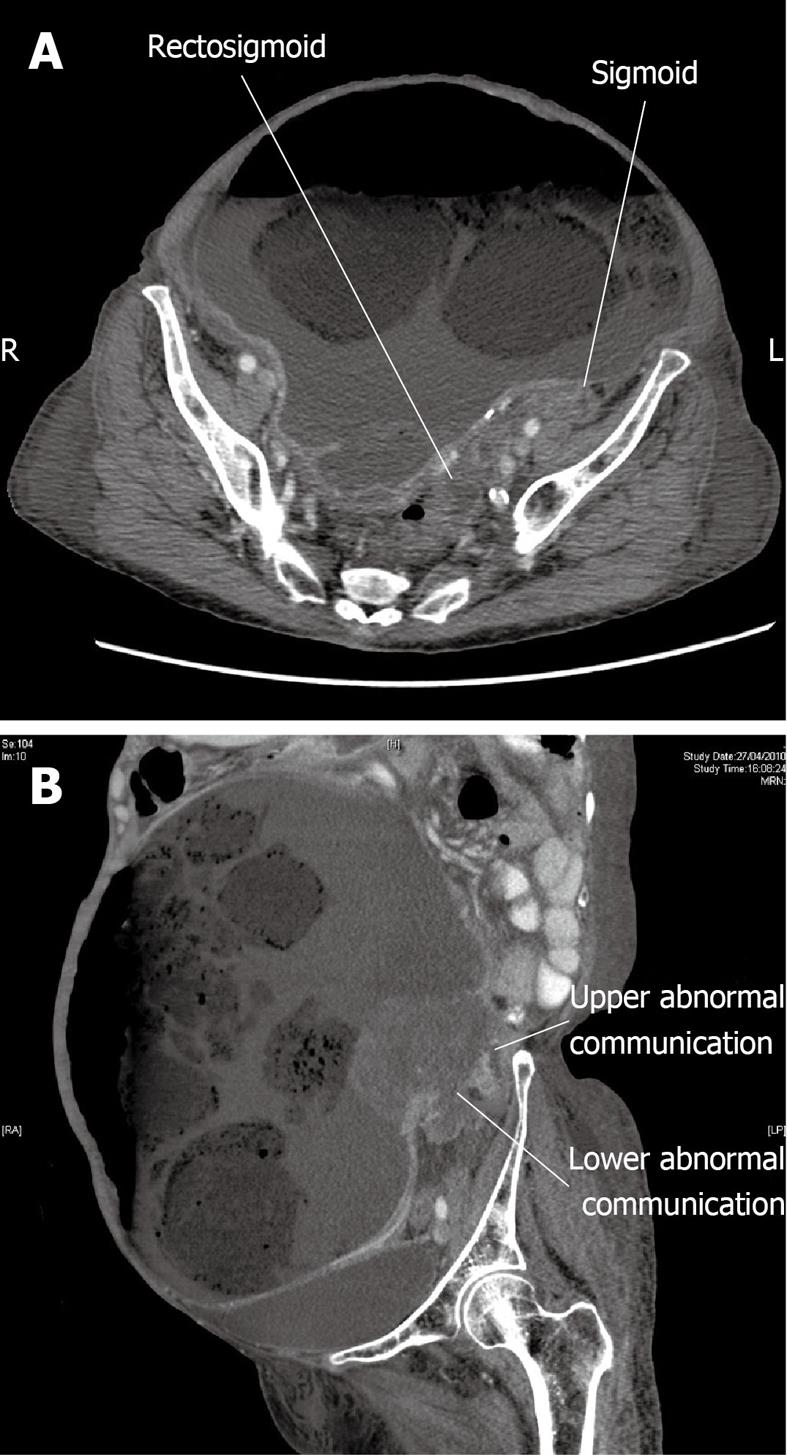 Urgent laparotomy was arranged. Intra-operatively, there was a huge cystic lesion occupying the abdomen and pelvis; the lesion was densely adhered to the anterior abdominal wall and the pelvic organs. The right ovary could not be visualized but the left ovary was grossly normal. The cyst was inseparable from the colon at the sigmoid-descending junction, where solid tumor mass was found over the cyst wall. The cyst wall was completely intact at the time of laparotomy. In order to facilitate dissection, gaseous content of the cyst was decompressed by needle aspiration. The whole lesion was completely excised en bloc with the involved colonic segment. End colostomy was fashioned over the left upper quadrant.

Macroscopic examination of the specimen revealed a huge complex cystic lesion containing feces, gas and necrotic material inside. It had a smooth serosal surface with focal gangrenous change. The size of the colonic fistula was 5 mm in diameter. Microscopic examination confirmed poorly differentiated squamous cell carcinoma, arising from mature cystic teratoma (MCT) of the ovary (Figure 3). Direct tumor invasion into the submucosa of the colon was evident. Most of the cyst wall was eroded and replaced by granulation tissue and fibrous tissue with focal calcification, indicating previous episodes of cyst wall rupture, inflammation and organization.

The patient’s condition gradually improved after the laparotomy. However, she was noticed to have left lower limb swelling on D5. Above knee deep vein thrombosis was confirmed by Doppler ultrasound examination and anti-coagulation therapy was initiated. Taking into consideration the advanced stage of the tumor and the poor pre-morbid state of the lady, completion hysterectomy, salpingo-oophorectomy and lymphadenectomy were not offered. She was discharged home after a 3-wk period of mobilization exercise.

Four months later, she presented to our unit again with abdominal pain. On admission, her lower abdomen was diffusely tender and distended but abdominal X-ray did not reveal any dilated bowel loops. Urgent CT scan showed features suggestive of peritoneal carcinomatosis with a 5-cm heterogenous tumor in the pelvis. She was confirmed to have urinary tract infection and treated with antibiotics according to the culture result. Despite medical treatment, her condition continued to deteriorate and she finally succumbed 1 wk after admission. Though no macroscopic peritoneal nodules were noticed during the initial operation, disease dissemination likely had occurred at the time of fistula formation, which would account for her subsequent rapid deterioration.

The differential diagnosis of a gas-filled abdominal mass containing fecal matter includes giant colonic diverticulum[1-3], sigmoid or cecal volvulus, and duplication of colon[4]. MCT with fistula formation to colon is an extremely remote cause. This diagnosis requires a very high index of suspicion. In hindsight, this should have been considered in our patient who had a long history of cystic lesion.

Fistulation is a rare complication of MCT and urinary bladder is the most commonly affected organ[12,13]. Malignant transformation is not a pre-requisite for fistulation. Inflammation related to previous subclinical leakage of cyst content is believed to be the etiology of fistulation in some of the previous reports[12,14]. In our patient, both inflammation and direct infiltration by malignant cells might have contributed to the formation of fistulation. The presence of significant tumor bulk around the area of fistulation suggested tumor invasion being the predominant factor.

Because of its rarity, management of squamous cell carcinoma arising from MCT is not well defined. In a recent review[15], hysterectomy, bilateral salpingo-oopherectomy and lymphadenectomy were associated with better outcome; whereas omentectomy did not improve survival. Striking differences in survival existed between stage 1 disease and all other tumor stages. The 5-year survival rates reported by Chen et al[16] were 75.7%, 33.8%, 20.6% and 0% for stage I-IV disease, respectively.

In conclusion, squamous cell carcinoma arising from ovarian teratoma can rarely present as a surgical emergency with gross abdominal distension resembling bowel pathology such as giant colonic diverticulum and duplication cyst. Surgical resection remains the mainstay of treatment while adjuvant chemotherapy may improve survival in early stage diseases. Unfortunately, the overall prognosis is grave except for stage I disease.