Developments in technology and medicine and improvements in anesthetic and surgical techniques have led to the extensive use of laparoscopic procedures for different patient groups, including high-risk patients[1-4]. The advantages of laparoscopic surgery compared with open surgery include a shorter hospital stay, early return to work, and decreased cost. Other advantages of laparoscopic surgery include less perioperative blood loss, a reduction in, or absence of, postoperative pain, and better cosmetic healing[5].

Thirty healthy male New Zealand rabbits weighing 3.0 to 3.5 kg were randomly divided into three groups (n = 10 in each group) and submitted to different CDP pressures: a control group (no gas), 10 mmHg group (carbon dioxide pressure was 10 mmHg), and 15 mmHg group (carbon dioxide pressure was 15 mmHg). Rabbits were given no water or food for 8 h prior to the experiments. They received 1 mg/kg midazolam and 20 mg/kg ketamine before surgery. A tracheal incision was made, and a 4.5 F canal was inserted for mechanical ventilation. The tidal volume was maintained at 10 mL/kg at a frequency of 30 times per minute. Anesthesia was sustained with injections of ketamine (5 μg/kg per minute) and vecuronium bromide (0.1 mg/kg per minute). All chemical treatments were halted 10 min before CDP induction. The rabbits in the experimental groups underwent CDP for 1 h. Mechanical ventilation was stopped once the rabbits recovered from CDP. All operations were approved by the animal care guidelines of the General Hospital of Chengdu Military Command.

Blood samples were collected from ear-edge veins 12 h after the commencement of CDP and allowed to clot, and sera were isolated by centrifugation at 1000 r/min for 10 min and stored at -20°C until the assay. Serum levels of alanine transaminase (ALT), aspartate transaminase (AST), and albumin were determined by routine laboratory methods using a Hitachi Automatic Analyzer (Hitachi, Inc., Japan).

Liver biopsies were collected 12 h after the beginning of CDP, and the specimens were fixed in 10% formaldehyde for 12 h to 24 h, embedded in paraffin, sliced into 5-μm-thick sections, and stained with hematoxylin and eosin. Histological changes in the liver tissues were observed using a micrographic system (Olympus).

Liver tissues were fixed using 3% glutaraldehyde, postfixed in 1% osmium tetroxide in 0.1 mol/L cacodylate buffer, dehydrated with acetone, and embedded in EPON 812. After location by semi-thin sectioning, the samples were sectioned to a thickness of 50-80 nm and poststained with 2% aqueous uranyl acetate. All samples were examined and photographed by transmission electron microscopy (PHILIPS TECNAI 10, Netherlands) at an accelerating voltage of 100 kV.

Mitochondria in the liver tissues were isolated by centrifugation. The activity of adenine nucleotide translocator (ANT) in the liver tissue was detected using the atractyloside-inhibitor stop technique. Mitochondrial function was initiated by adding 3H-ADP and terminated after 12 s by adding adriamycin. The radioactivity in each group was measured, and ANT activity was expressed as 10-9 mol/min per g protein.

All experimental data are expressed as the means ± SD and were analyzed by a t-test using SPSS 10.0 statistical software. Probability values of < 0.05 were considered to be statistically significant.

Blood pH in the 10 mmHg group was significantly decreased compared with the control group at 30 min and 60 min after CDP induction (Figure 1A), and PaCO2 was significantly increased (Figure 1B). Blood pH and PaCO2 levels were much higher in the 15 mmHg group than in the controls at these time points (Figure 1A and B). However, there were no significant differences in PaO2, SpO2, or pH levels for the experimental groups at 12 h post-CDP induction compared with the control group (Figures 1C and D). 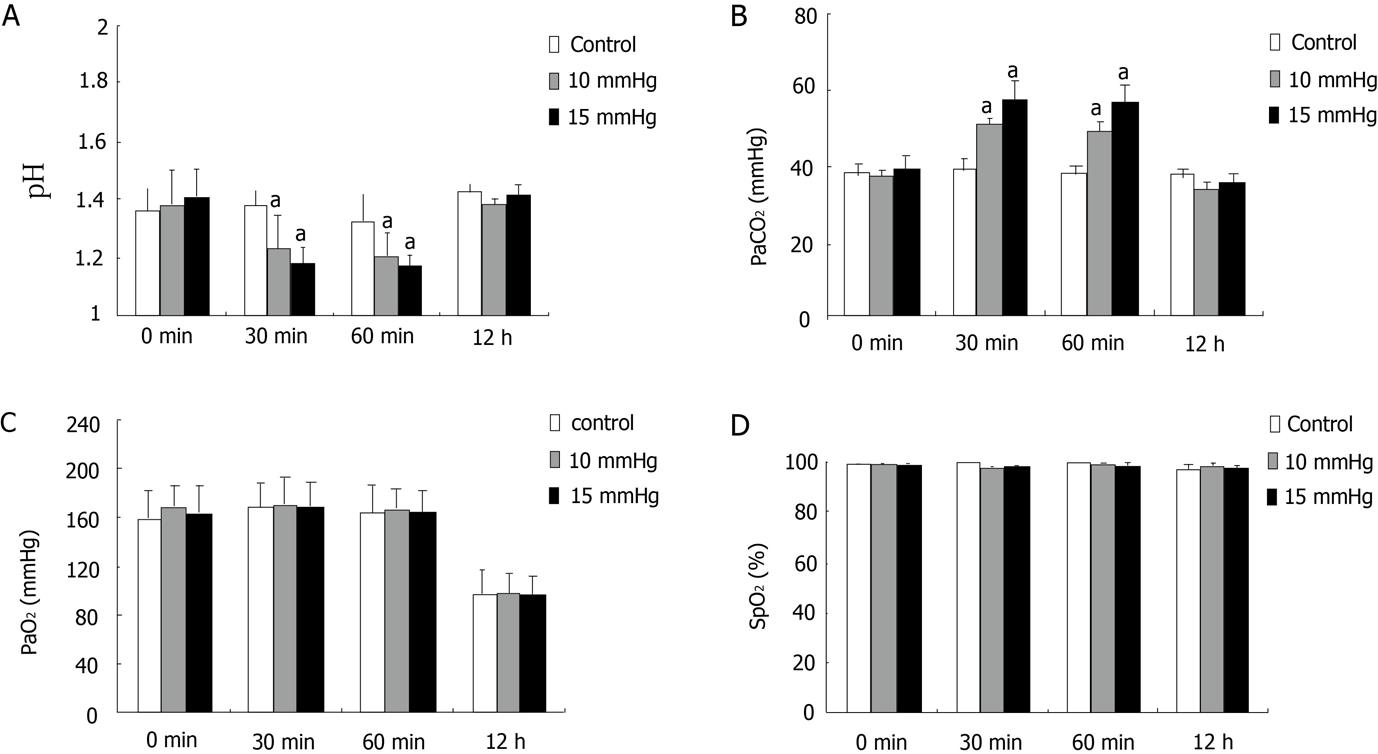 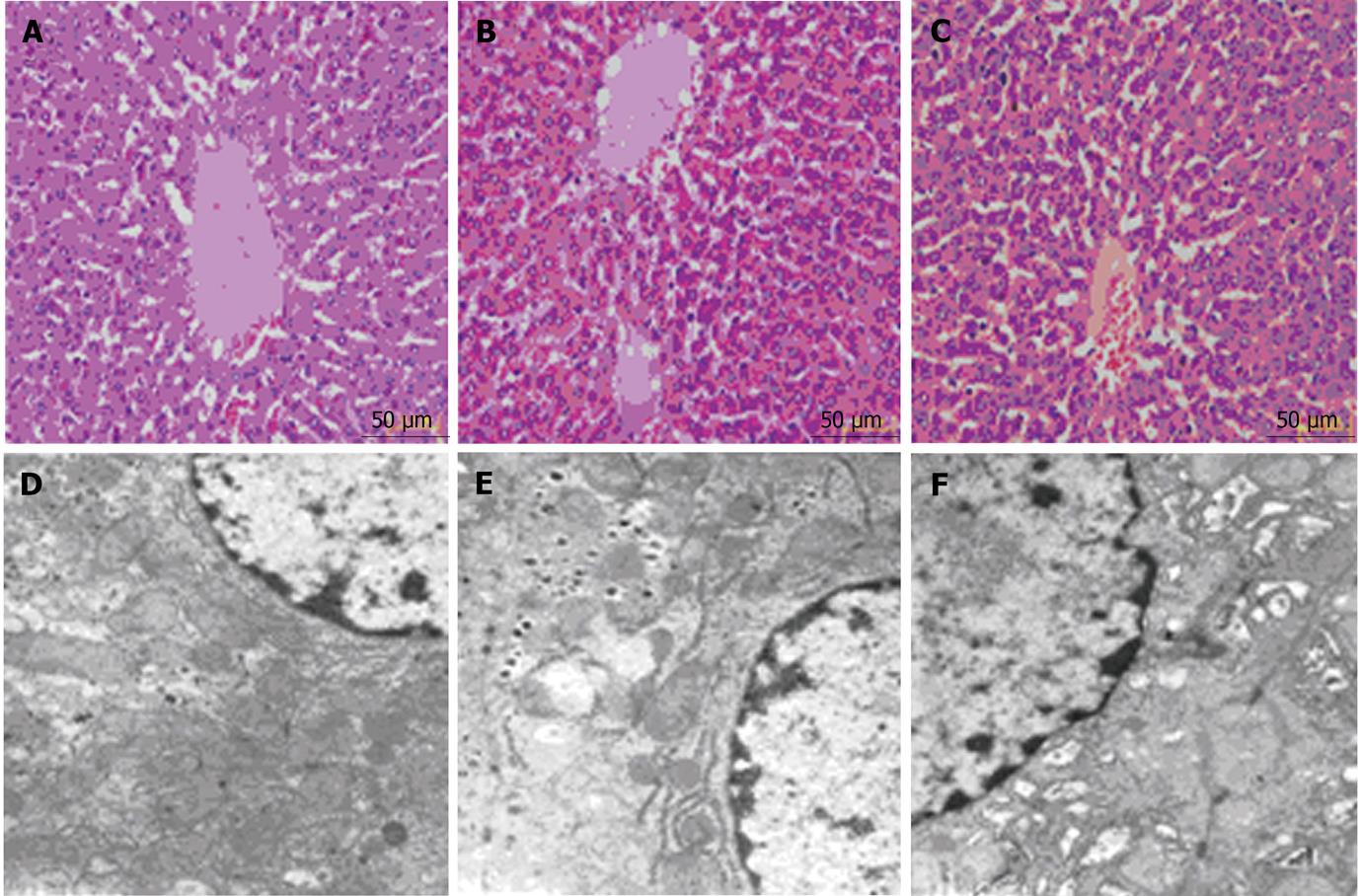 Expression of Bax and Bcl-2 in liver tissue 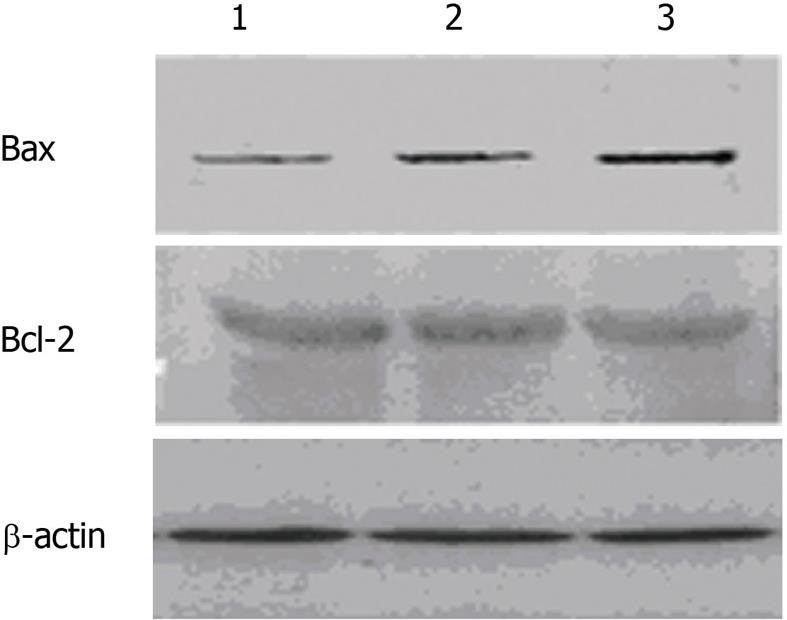 Laparoscopic procedures are favored by both surgeons and patients because of convenience, the minor degree of trauma, rapid healing, and a good cosmetic prognosis[5]. A pneumoperitoneum is a necessary requirement during laparoscopic operations, and carbon dioxide is the most frequently used gas to create a pneumoperitoneum. Previous studies have noted that the increased abdominal pressure caused by CDP in a short time span can impact the hemodynamics, hemoperfusion, and function of critical abdominal organs, such as the liver[15-17]. Technical advancements have led to laparoscopic surgery becoming more complicated, and a lower-pressure CDP (e.g., 10-12 mmHg) is no longer sufficient. To create a sufficient operation space and decrease complications during laparoscopic procedures, many surgeons have increased the CDP abdominal pressure to 15 mmHg. However, the safety and effects of this pressure on abdominal organs have not been fully elucidated. The liver is one of the most important abdominal organs, and it is quite sensitive to harm. Therefore, in this study we investigated the effects of two clinically relevant CDP pressures on liver function, hepatocyte morphology, and protein expression.

Serum ALT and AST are two most commonly used markers of hepatocyte damage. In our study, a 1-h CDP operation resulted in hepatocyte injury at both 10 mmHg and 15 mmHg CDP. Increased ALT and AST levels were observed, suggesting that hepatocytes were damaged by both carbon dioxide pressures. More pronounced changes were detected in the 15 mmHg CDP group, indicating a more severe level of hepatocyte injury. Albumin and pre-albumin levels are markers of hepatocyte protein synthesis. Our data show that 10 mmHg CDP did not impact serum albumin levels, suggesting that 10 mmHg does not affect the rate of hepatocyte protein synthesis, despite its influence on ALT and AST levels. However, 15 mmHg CDP resulted in a decrease in pre-albumin, indicating that this CDP pressure could disturb hepatocyte activity as well as liver function. No significant changes in albumin levels were observed in the two CDP groups compared with the control group. The relatively long half-life of albumin might have been responsible for this phenomenon. In this experiment, we only measured albumin levels up to 12 h after the operation, which is quite short given the 14-d half-life of albumin.

The mechanisms underlying the influence of CDP on liver function might be related to hemodynamic changes and imbalanced acid-base levels. Many studies have shown diminished portal venous flow during increased intra-abdominal pressures, which possibly leads to decreased liver blood supply and impaired hepatic function[9,15,18-21]. Hepatic perfusion is characterized by a unique autoregulatory mechanism known as the hepatic arterial buffer response. Under physiological and pathological conditions, alterations in portal venous flow are counteracted by changes in hepatic arterial flow, thereby maintaining total hepatic blood flow and preserving a sufficient supply of oxygen to the liver[22,25,26]. However, several studies have demonstrated that during CDP, hepatic arterial blood flow does not compensate for the reduction in portal venous inflow[9]. Furthermore, there is a linear relationship between intra-abdominal pressure and portal venous pressure as well as a reciprocal correlation between increased intra-abdominal pressure and decreased portal venous flow[9,20,21,27]. In this study, CDP resulted in increased PaCO2 levels and decreased blood pH, and this effect was more pronounced at 15 mmHg than at 10 mmHg. These results indicate that increased abdominal pressure leads to more severe acidosis. These changes are thought to result from the absorption of insufflated carbon dioxide or ventilation-perfusion mismatching during the procedure[28,29]. Absorption of carbon dioxide through the peritoneum may result in an accumulation of carbon dioxide and subsequent acidosis. However, increased abdominal pressure during CDP could reduce abdominal blood flow and result in local hypoxia, which is another cause of acidosis[21,30]. Some researchers have adopted this view, which has been further discussed in studies demonstrating splanchnic hypoperfusion, regardless of whether intra-abdominal pressure was increased without the use of gas[20,21] or insufflation of CO2, N2O, helium, or argon was used to induce pneumoperitoneum[17,19,31-33]. Neither PaO2 nor SpO2 was affected by the two CDP pressures, possibly because of the use of intermittent positive-pressure mechanical ventilation.

In addition to influencing hemodynamics and the acid-base balance, CDP operations resulted in changes in hepatocyte morphology. Neither pressure led to apparent tissue damage (based on hematoxylin and eosin staining), but both pressures resulted in mild liver hyperemia, the severity of which was related to CDP pressure. CDP also impacted hepatocyte ultrastructure, including mitochondrial swelling and expanded rough endoplasmic reticulum. The activity of ANT, a marker of mitochondrial energy metabolism[34], was reduced after 15 mmHg CDP, but not by 10 mmHg CDP. This suggests that a relatively lower pressure might not impact hepatocyte energy metabolism, despite mitochondrial swelling.

Bcl-2 and Bax are 2 important apoptotic regulatory genes. They are widely distributed in tissues and cells, and they coordinate with each other to regulate apoptosis. When Bax expression is upregulated, Bax/Bax homodimers are formed to induce apoptosis. However, increased Bcl-2 expression results in isodimers of Bcl-2 and Bax that inhibit apoptosis[35]. In this study, neither 10 mmHg nor 15 mmHg CDP resulted in increased Bcl-2 expression. However, both pressures led to elevated Bax expression, especially in the 15 mmHg group, suggesting that CDP procedures promote hepatocyte apoptosis in a pressure-dependent manner. Elevated levels of hepatocyte apoptosis might be responsible for the disturbed liver function caused by CDP.

To summarize, we investigated the presence and mechanisms underlying liver damage caused by two clinically relevant CDP pressures. Liver injury has been shown to be pressure-dependent[11]. Although a relatively high CDP pressure is required for laparoscopic procedures, such as the 15 mmHg pressure used in this study, we must bear in mind that this pressure can cause serious damage to liver function. The liver damage resulting from CDP may not cause severe complications, but the potential for such damage in patients with liver diseases is of particular importance. Some reports have shown that a shorter duration of carbon dioxide pressure during pneumoperitoneum might help to alleviate liver injury[8]. Stepwise increases in carbon dioxide insufflation might also be an ischemic preconditioning method to reduce liver injury[36]. Future studies are needed to elucidate the mechanisms underlying CDP-induced liver function damage, and the safety of CDP under different surgical conditions should be carefully evaluated[1-4,37].

Laparoscopic surgery is widely used, and the traditional low carbon dioxide pneumoperitoneum (CDP) pressure no longer meets the requirements of complicated operations. The safety of high CDP pressure in clinical practice is the subject of much attention.

Some studies have shown that liver injury is pressure-dependant, and hepatocyte apoptosis was observed in the present study.

The liver is a critical organ that is sensitive to many harmful factors. Liver changes during CDP operation were evaluated in this study by assaying several different markers. The data suggest that the different pressures cause hepatic injury.

As indicated by the experimental data, although higher pressure provides more space for CDP operation, the resulting hepatic injury must be considered. Therefore, the appropriate CDP pressure should be carefully chosen for laparoscopy.

CDP is the abdominal space created by insufflating carbon dioxide to provide operation space for laparoscopy.

This is an interesting study even if on a well studied subject.