The complications of non-steroidal anti-inflammatory drugs (NSAIDs), aspirin, antiplatelet agents, and antithrombotic agents are known to include gastrointestinal ulceration, bleeding, perforation and obstruction[1]. NSAID-induced mucosal injury can occur to the upper and lower gastrointestinal tract. The incidence of NSAID-induced enteropathy is not less than that of gastropathy. Diaphragm disease is the most severe stage of NSAID enteropathy. In ambulatory patients who took NSAIDs for > 3 mo because of arthritis, 70% had small intestinal ulcers and erosions by capsule endoscopy[2]. The diaphragm is formed by chronic fibrosis and destruction of lamina muscularis with chronic ulceration, and causes obstruction of the lumen in the small bowel[3]. However, diaphragm disease is a rare diagnosis.

Cryptogenic multifocal ulcerous stenosing enteritis (CMUSE) has multiple ulcerations and strictures in the small intestine; it is similar to diaphragm disease in terms of gross findings, and it is characterized by a chronic and relapsing clinical course, and is more common in middle-aged patients.

We report a case of diaphragm disease in the small bowel that presented with obscure overt bleeding due to NSAID use, which was detected by capsule endoscopy. We review the differential diagnosis with CMUSE through histological findings and clinical course after surgery.

A 79-year-old woman was hospitalized for a low level of hematochezia. At admission, her hemoglobin level was 8.9 g/dL. She had also taken 20 mg piroxicam, 275 mg naproxen and 25 mg diclofenac daily for 4 years because of degenerative joint diseases. She had been hospitalized for iron deficiency anemia 5 years ago and there was no active bleeding focus upon esophagogatroduodenoscopy (EGD) and colonoscopy at that time. It was recommended that she undergo capsule endoscopy, however, she refused and was discharged.

After hospitalization, she had EGD and abdominal computed tomography (CT) to find the focus of her bleeding. No bleeding foci were revealed by EGD and abdominal CT. She had no more hematochezia after hospitalization. On day 3 of hospitalization, capsule endoscopy was performed. There were multiple, concentric circular ulcerations, with luminal narrowing in the jejunum and ileum, with many variable-sized erosions and bleeding stigmata in the ulcerations (Figure 1). The capsule in the small bowel was not excreted until 8 d after capsule endoscopy, even though she could have a meal. According to the results of capsule endoscopy, we need to diagnose differentially between NSAID-induced enteropathy and CMUSE, because of the gross similarities, such as multiple ulcerations and strictures in the small intestine. Even though the patient was an elderly woman and took NSAIDs, she was not diagnosed with NSAID-induced enteropathy because of the similar endoscopic findings to CMUSE. To confirm the diagnosis, histological examination was needed. She complained of chronic abdominal pain for 2 years, therefore, we could diagnose by capsule endoscopy that she had symptomatic multiple strictures.

Figure 1 Capsule endoscopic findings. A: There were concentric ulcerations with luminal narrowing; B: There were many variable-sized erosions and bleeding stigmata in the ulcerations; C: There was a totally obstructed lesion in which the capsule was suspected to be retained.

To relieve the chronic abdominal pain caused by the multiple strictures in the small bowel, and to remove the retained capsule and evaluate the exact cause of the multiple ulcerations and strictures, we performed segmental resection of the ileum (Figure 2) instead of double balloon enteroscopy. Histological findings in the ileum (Figure 3) revealed typical multiple, circular ulcerations and a mucosal diaphragm, which suggested the most severe complications of chronic NSAID use. These mucosal diaphragms indicate chronic ulcers, submucosal fibrosis, reactive epithelial change, and chronic inflammation. After discharge, she had no more gastrointestinal bleeding and abdominal pain and took misoprostol at the outpatient clinic with close observation for > 1 year. 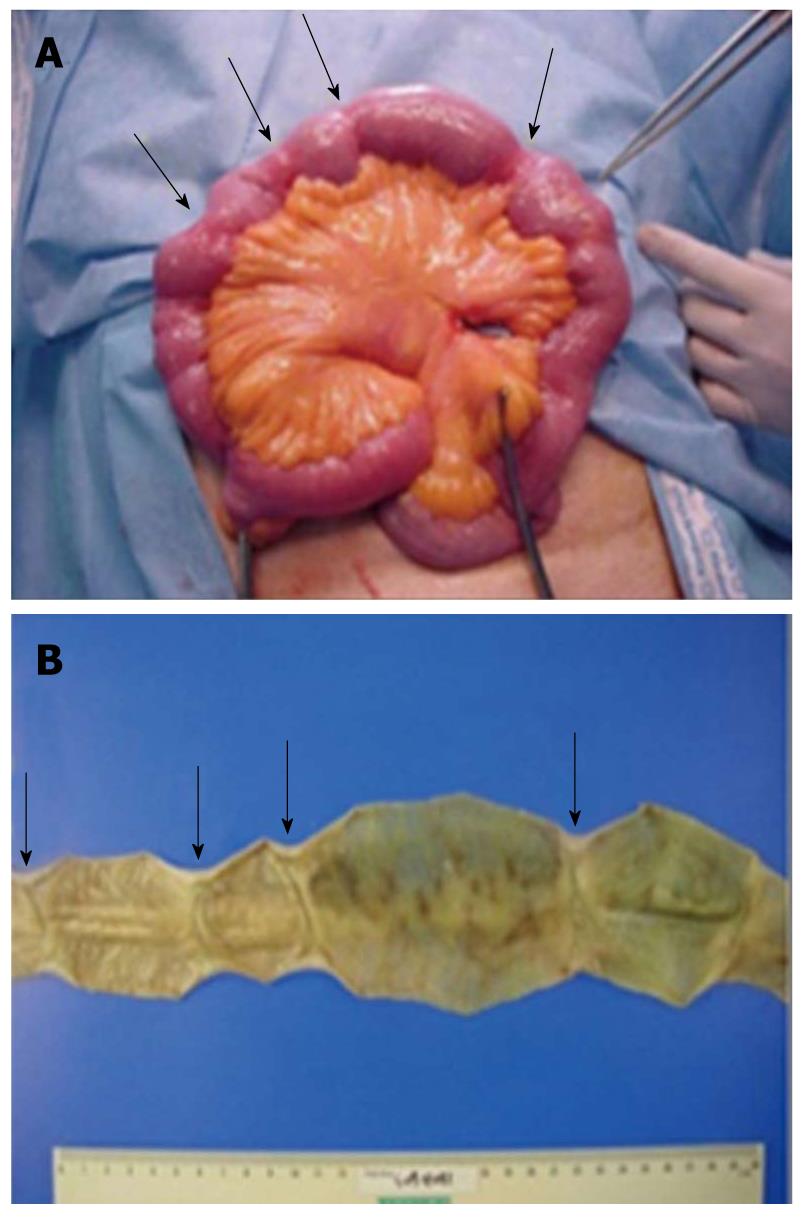 Figure 2 Specimen from segmental resection of the ileum. A: A capsule was located at 60 cm up from the terminal ileum. Forceps and hand point out the location in the ileum where the capsule was retained. There were multiple strictures in the ileum (black arrows); B: In longitudinal section, there were multiple thin, web-like mucosal septa that caused abrupt luminal narrowing in the small intestine (black arrows). 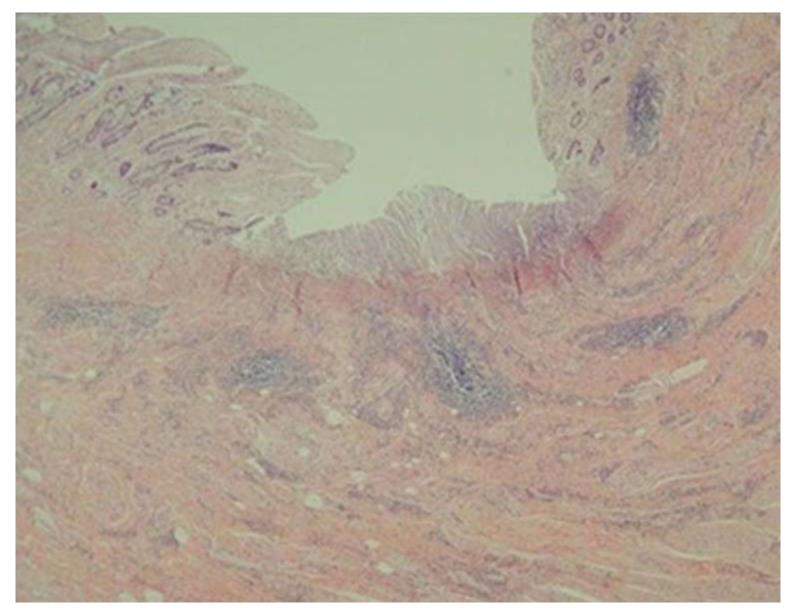 Several other authors have reported diaphragm disease in patients taking NSAIDs, by enteroscopy[6] and after laparotomy[5,7]. The first diagnosis of small intestinal diaphragm disease after use of NSAID through capsule endoscopy was reported by Yousfi et al[3]. In their study with capsule endoscopy, there were multiple small-intestinal strictures where the capsule was retained. Thus, exploratory laparoscopy was required to remove the retained capsule, as in our case.

After long-term use of NSAIDs for > 20 years, the small intestine shows fibrotic constriction and thickened hyperemic mucosa that lead to obstruction through local damage and healing process[8].

The origin of gastrointestinal bleeding can be detected in a higher percentage of patients by capsule endoscopy than by CT angiography and double balloon enteroscopy[10]. In our case, we performed capsule endoscopy to find overt obscure bleeding foci after abdominal CT scanning. There was no definite stricture or sign of significant obstruction by abdominal CT. However, the capsule became trapped in the bowel unexpectedly. The important complication of capsule endoscopy is capsule retention, for which the incidence is < 2%[15]. Intestinal stricture might be suspected, especially in patients with chronic NSAID use, ischemic bowel disease, abdominal radiotherapy, and Crohn’s disease. For these patients, capsule endoscopy can be performed after abdominal CT or small bowel series to find strictures[10]. Stricture cannot be found completely by abdominal CT or small bowel series, therefore, an M2A patency capsule can be considered, which is biodegradable in the gastrointestinal tract in patients with suspected intestinal stricture[16].

Our patient had multiple ulcerations and strictures in the small intestine, therefore, diaphragm disease was needed to be differentiated from CMUSE, even though the patient was an elderly woman who was taking NSAIDs. The characteristics of NSAID-induced enteropathy and CMUSE using previously published data are summarized in Table 1. CMUSE is defined as unexplained small intestinal multiple strictures and ulcerations of unknown origin. It is characterized as an atypical type of vasculitis[17]. Its clinical features include unexplained stricture and ulceration of the small bowel, without systemic inflammation, which are found in young and middle-aged patients. CMUSE can relapse chronically or after surgery. The symptoms of CMUSE can be improved by steroid treatment[17,18].