AIM: To investigate morphological changes of the enteric nervous system (ENS) and the interstitial cells of Cajal (ICCs) in small bowel atresia.

RESULTS: The neuronal and glial markers (PGP 9.5, NF, S-100) were expressed in hypertrophied ganglia and nerve fibres within the myenteric and submucosal plexuses. Furthermore, the submucous plexus contained typical giant ganglia. The innervation pattern of the proximal bowel resembled intestinal neuronal dysplasia. The density of myenteric ICCs was clearly reduced in the proximal bowel, whereas a moderate number of muscular ICCs were found. The anti-CD117 immunoreaction revealed additional numerous mast cells. The distal bowel demonstrated normal morphology and density of the ENS, the ICCs and the mast cells.

CONCLUSION: The proximal and distal bowel in small bowel atresia revealed clear changes in morphology and density of the ENS and ICCs.

Small bowel atresia is a congenital disorder that carries a substantial morbidity[1,2]. The etiology of bowel atresia remains unclear. One of two accepted theories of its pathogenesis is the concept of a lack of recanalization of the solid organ cord during the late stage of intestinal development[3]. Another concept is the occurrence of a late intrauterine mesenteric vascular accident[4]. The lack of revacuolization is the probable cause for most cases of duodenal atresia. Further studies have demonstrated that jejunoileal atresias occur as a result of intestinal volvulus, intussusception, internal hernia, or strangulation in a tight gastroschisis or omphalocele defect[5-11].

Newborns with small bowel atresia are operated on soon after birth. Owing to the severity of the dilatation of the proximal bowel and the hypoplasia of the distal bowel, various postoperative gastrointestinal motility problems may occur; such problems include prolonged adynamic ileus (11%) and the need for total parenteral nutrition (30%-70%)[12]. The underlying cause of this postoperative intestinal motility disorder is still unclear.

ICCs play a major role in gastrointestinal motility. ICCs express the tyrosine kinase receptor c-kit. Therefore specifically designed c-kit antibodies have been developed which stain ICCs but also other cell groups such as stem cells and mast cells. However, c-kit positive ICCs can be identified by clear morphological features.

The aim of this study was to investigate the morphology of the ENS and the ICCs in resection specimens of small bowel atresia.

MATERIALS AND METHODS
Patients and tissues

The specimens were fixed in 4% paraformaldehyde and processed into paraffin blocks. Paraffin-embedded tissues were sectioned at 2-4 μm (Leica SM 2000 R) followed by drying at 37°C in an incubator overnight. Before immunohistochemical staining, the paraffin sections were dewaxed for 10 min in xylene, followed by 10 min in acetone and 10 min in acetone/Tris-buffered saline (TBS; 1:1). After this treatment, the slides were washed in TBS.

If heat antigen retrieval was required, dewaxed paraffin sections were placed in microwave-proof tubes containing target retrieval solution (Dako). The slides were treated in the tubes for 5 min at 600 W in a microwave (SS 566H; Bosch, Munich, Germany). The evaporated volume was replaced by distilled water, and the procedure was repeated twice. After microwave treatment, the slides were left to cool down, then were washed in TBS.

The evaluation of the immunohistochemical staining results was focused on the proximal and distal parts of the resected ileum. 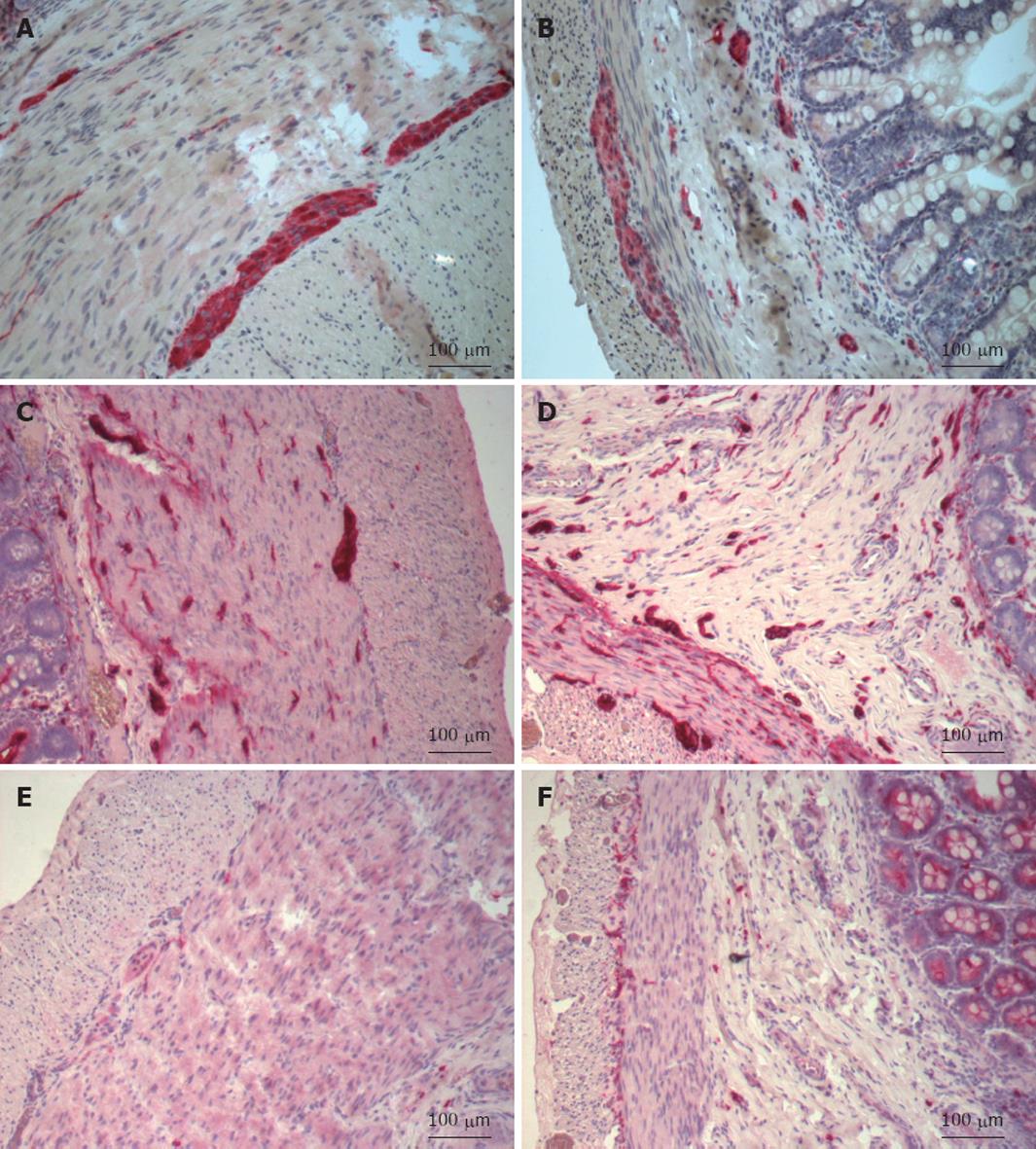 The distal bowel had a normally expressed ENS within the submucosal and myenteric plexuses (Figure 1B).

Numerous S-100 immunoreactive glial cells were found in the two plexuses of the proximal ileum (Figure 1C). The expression of glial cells was increased within the proximal dilated bowel compared to the atretic and distal bowel (Table 2). Additional giant ganglia (> 10 ganglion cells/ganglion) were stained by S-100 within the submucosal plexus of the proximal bowel. Regular distribution and morphology of S-100 immunoreactive cells and fibers was found within the myenteric and submucosal plexuses of the distal ileum (Figure 1D).

This study revealed distinct changes in the morphology of the ENS and ICCs in parts of the resected bowel proximal to small bowel atresia. In general, our findings are not unique since previous studies described changes within the ENS in small bowel atresia. Ozguner et al[14] reported that the proximal segment of the atretic intestine showed structural deficits. Abnormal ganglia cells and defects in the intestinal musculature were prominent, but the intestinal mucosa remained intact. They found abnormalities in both the antimesenteric side and mesenteric side. Their interpretation supported a vascular accident as a causative factor.

The crucial problem of investigating the developing ENS or pathological changes within the ENS in order to define hyper-ganglionosis or hypoganglionosis is the uncertainty in the normal numbers and distribution of enteric ganglia. The normal neuron density of the human myenteric plexus was investigated in several studies and resulted in a huge variation of more than 200-fold[17-20]. Schuffler et al[17] found 27.8 nerve cells per 100 mm of smooth muscle, Ikeda et al[19] described more than 30 nerve cells per 10 mm of smooth muscle as normal, whereas Smith[18] estimated 7 nerve cells per mm of smooth muscle. Finally Meier-Ruge et al[20] found 756 ganglion cells per 10 mm of smooth muscle. All these investigations were performed on conventional paraffin sections[17-20], which usually display only a two-dimensional image of the investigated structures. Since these profound differences have already been found within normal bowel specimens, conflicting results on numerical changes of ganglia and nerve fibers within the changed ENS in bowel atresia must be expected. Another major aspect is the widely accepted concept of ongoing postnatal plasticity of the ENS, which has to be taken into consideration.

A previous animal study which created a partial obstruction in dog ileum revealed that the ganglion cells increased in size and the smooth muscle of the dilated bowel became thicker[21]. The number of ganglion cells related to the muscle mass was decreased above the constriction. Although some ganglion cells increased in size, there was no evidence of any increase in number. Experimentally, a similar increase in ganglion size was observed proximal to a stenosis in another study[22]. In a chicken embryonic model of bowel obstruction, a marked reduction of the submucous plexus ganglia with intact muscular plexus ganglia was noted in the dilatated gut[23].

Our study also showed an increase in size of ganglia (hypertrophy). These hypertrophic myenteric and submucosal ganglia in the proximal resected bowel could be considered the result of adaptive phenomena to the long-lasting prenatal bowel obstruction. Several experimental models have been instrumental in supporting the concept that adaptive changes to the ENS occur proximal to the obstructed gut[24-31]. These studies revealed an increased density and size in both myenteric[26,28,29,31] and submucosal neurons[29-31], along with neurochemical[28,30] and cytoskeletal abnormalities of the myenteric neurons[31].

Another observation is the delayed maturation of ENS within the distal bowel during fetal development in cases with small bowel atresia[32]. Distortion of the polygonal architecture of the myenteric plexus has been shown postnatally in atretic parts of ileal type IIIa atresia[33]. It could only be speculated that after the restoration of bowel continuity does maturation of the ENS occur.

A previous animal study using a partial small obstruction model in mice revealed that 2 wk following the onset of a partial obstruction, the bowel increased in diameter, and hypertrophy of the tunica muscularis was observed oral to the obstruction site[27]. Networks of ICCs were disrupted oral to the obstruction, and this disruption was accompanied by the loss of electrical slow waves and responses to enteric nerve stimulation. These defects were not observed aboral to the obstruction. Furthermore, it was shown that removal of the obstruction led to the redevelopment of ICC networks and the recovery of slow wave activity within 30 d. Neural responses were partially restored in 30 d[27]. Similar repair mechanisms may occur after surgical correction of small bowel atresia. It seems obvious that decreases in ICCs in small bowel atresia and their restoration after removal of the obstruction contributes to the regulation of gastrointestinal motility.

The ENS and ICCs are altered in the proximal and dilated bowel in small bowel atresia. The innervation pattern of the proximal bowel resembles intestinal neuronal dysplasia. These changes might be the result of long-lasting bowel obstruction and stasis of bowel contents. The presented histological features do not contribute to the search for the pathogenesis of small bowel atresia. Nevertheless, the confirmed innervation abnormalities and defective expression of CD117-positive cells of the proximal bowel may have an influence on the postoperative gastrointestinal motility of the affected patients.

Small bowel atresia is a congenital anomaly of unknown cause. Despite early corrective surgery, patients carry a substantial morbidity because of postoperative gastrointestinal motility problems. Normal gastrointestinal motility is generated by the complex interaction of the enteric nervous system (ENS), the intestinal smooth muscle and the interstitial cells of Cajal (ICCs). Alterations in the ENS and ICCs may contribute to the motility problems in patients with small bowel atresia after surgery.

Previous studies revealed histological changes within the wall of the atretic and adjacent bowel in small bowel atresia. Nevertheless the relationship between the macroscopic and histological changes of the affected bowel and the postoperative motility disorder are still under investigation. Furthermore, the role of the ICCs in small bowel atresia needs to be elucidated further.

This study showed that the ENS and ICCs are altered in the proximal and dilated bowel in small bowel atresia. The innervation pattern of the proximal bowel resembles intestinal neuronal dysplasia.

The changes within the ENS and the ICCs may be the result of a long-lasting bowel obstruction and stasis of bowel contents. The presented histological features do not contribute to the search for the pathogenesis of small bowel atresia. However, the confirmed innervation abnormalities and defective expression of CD117-positive cells of the proximal bowel may have an influence on postoperative gastrointestinal motility in the affected patients.

The authors studied the ileum of seven patients with ileal atresia. They reported that the proximal dilated intestine had an increased expression of nerve fibers and glial cells, with a decrease in ICCs, and an increase in ganglia size, whereas the distal intestine displayed normal features. They conclude that these alterations may influence on postoperative intestinal motility. The authors performed a well designed study in a very uncommon congenital disease, which is very interesting for the readers.