AIM: To explore expressions of PIK3CA in the progression of gastric cancer from primary to metastasis and its effects on activation of phosphatidylinositol 3-kinase (PI3K)/Akt pathway.

METHODS: mRNA and protein levels of PIK3CA were assessed, respectively, by real-time quantitative polymerase chain reaction and immunohistochemistry in specimens of normal gastric mucosa, primary foci and lymph node and distant metastasis of gastric cancer. Akt and phosphorylated Akt protein were also examined by Western blotting in these tissues, in order to analyze the effect of PIK3CA expression level changes on the activation of PI3K/Akt signaling pathway.

RESULTS: PIK3CA mRNA in lymph node metastasis were approximately 5 and 2 folds higher, respectively, than that in the corresponding normal gastric mucosa and primary gastric cancer tissues (P < 0.05), while no statistical significance was found compared with distant metastasis. Immunohistochemically, PIK3CA protein expression was discovered in 7 (35%) specimens of 20 primary foci vs 10 (67%) of 15 of lymph node metastasis or 11 (61%) of 18 of distant metastasis (35% vs 67%, P = 0.015; 35% vs 61%, P = 0.044). With the increased level of PIK3CA expression, the total Akt protein expression remained almost unchanged, but p-Akt protein was upregulated markedly.

Several molecular pathways are known to play a role in gastric cancer development and progression[1-3]. The most important pathway may be the recently discovered phosphatidylinositol 3-kinase (PI3K)/serine/threonine kinase (Akt) signaling pathway.

The PIK3CA gene, which is located on chromosome 3q26.3, encodes the key enzymatic subunit p110α of PI3K[4]. It has been shown that mutations of the PIK3CA gene are highly prevalent in a variety of human solid tumors including colon, gastric, breast and pituitary cancer[5-9], which can lead to dysregulation of PI3K/Akt signaling pathway at several levels[10]. Guo et al[11] reported that mutant PIK3CA-bearing colon cancer cells displayed increased enzymatic activity of PI3K compared with wild-type PIK3CA-bearing colon cancer cells. In addition, the former showed a significantly enhanced level of phosphorylation of Akt as well as cell invasion and metastasis, which is consistent with the findings from Samuels et al[12]. Although many studies have implicated PIK3CA mutations with features of transformation[13,14], relationship between PIK3CA expression and metastasis of gastric cancer and aberrant activation of PI3K/Akt signaling pathway has not been elucidated to date.

From March 2008 to April 2010, 53 gastric carcinoma patients (45 with intestinal and 8 with diffuse gastric carcinoma) consisting of 29 males and 24 females, with a median age of 48 years (range from 20-72 years) admitted to the Department of Gastroenterology of our hospital and Guangdong Armed Police Hospital were assessed. Informed consent was obtained before operation from each patient for research use of the resected cancer lesions. Gastric cancer tissue samples including 20 primary (stage I-II), 15 lymph node metastasis (stage III) and 18 distant metastasis (stage IV) in gastric cancer were verified by pathological diagnosis. Ten normal tissue samples were obtained from around tumor tissues. All samples were immediately frozen in liquid nitrogen or fixed in 5% formaldehyde solution for subsequent analysis. None of the gastric cancer patients had received preoperative radiotherapy, chemotherapy or biotherapy. This study was approved by the Ethics Committee of the Guangzhou Medical College.

Transcript abundance of PIK3CA and β-actin (internal control) was quantiﬁed by RT-qPCR on total RNA isolated from normal gastric mucosa, and gastric cancer tissues of primary foci, lymph node and distant metastasis. Brieﬂy, 1 μg of total RNA was reversely transcribed in a reaction volume of 25 μL using oligodT(15) primers and M-MLV reverse transcriptase (Promega). The primers used for amplification are shown on Table 1. The PCR ampliﬁcation and ﬂuorescence detection were carried out in 20 μL solution, with 200 nmol/L of each primer and 5 μL of cDNA serving as templates, and SYBR Green PCR master Mix (ABI) using the ABI Prism 7500 Sequence Detection System was conducted following the manufacturer’s instructions. Each cDNA was analyzed in triplicate for both target genes and β-actin housekeeping genes. The cycling conditions were 50°C for 2 min, 95°C for 10 min followed by 40 cycles with each cycle consisting of 30 s at 95°C, and 1 min at 60°C. For each sample, a standard quantity was calculated using the 2-ΔΔC(T) method according to previously described protocol[16].

Immunohistochemical analysis was performed using DAKO Envision kits according to the manufacturer’s protocol. Briefly, 4-μm sections were cut into coated slides and were deparaffined using routine techniques. After treatment with 3% hydrogen peroxidase for 10 min to block endogenous peroxidases, the sections were subsequently incubated with monoclonal antibodies (rabbit anti-human PIK3CA, Cell Signaling Technology) for 30 min at room temperature, washed with Tris Buffered Saline for 10 min and reacted with Envision TM (Dako) for 30 min. Labelling was then detected as above using 3,3’-diaminobenzidine. Negative control was obtained by omitting the primary antibody. Samples mixed with only Phosphate Buffered Saline (PBS) buffer were treated as negative controls. For the evaluation of immunostaining, at least 1000 cells were counted from randomly selected 10 fields of vision and staining intensity as well as number of positive cells were assessed according to Hara’s method with minor modifications[17]. The staining was scored as follows: 0-1, < 20% cells with no or faint staining (negative); 2-4, 20%-50% cells with moderate staining (positive); and 5-6, ≥ 50% with marked staining (strong positive).

Statistical analysis was performed using SPSS software (Version 17.0). Differences in the results between groups were analyzed by the Mann-Whitney U-test, and a P value of less than 0.05 was taken as significant. 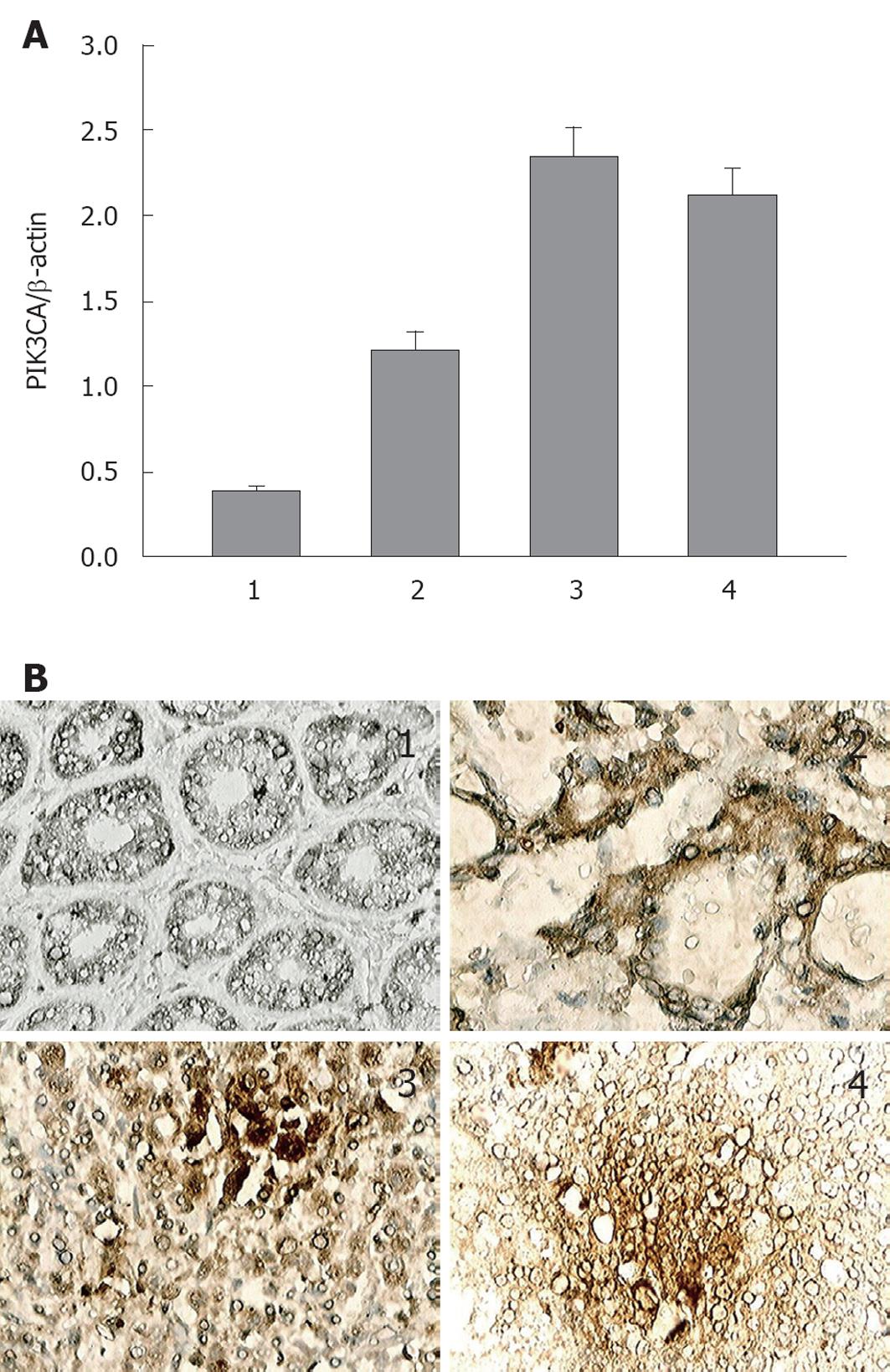 PIK3CA encoding the catalytic subunit p110α of PI3K, is an important signal molecule in PI3K/Akt signaling pathway, which was involved in tumor growth and metastasis[18]. Our studies indicated that normal gastric mucosa had almost no expression of PIK3CA, while lymph node metastasis and distant metastasis had significantly higher PIK3CA expression than the primary gastric cancer tissues, suggesting that PI3K/Akt pathway could be aberrantly activated in gastric cancer metastasis. To test this possibility, we examined the phosphorylation of Akt [p-Akt (Ser473)] and total Akt in normal gastric mucosa, primary foci, lymph node and distant metastasis in gastric cancer. The results revealed that p-Akt (Ser473) was not expressed (or loss) in normal gastric mucosa, and highly expressed in lymph node metastasis and distant metastasis compared with that in primary gastric cancer tissues (Figure 2A and B). However, total Akt expression levels remained nearly unchanged (Figure 2A and C). These findings indicated that up-regulation of PIK3CA expression level contributed to the increased catalytic activity of PI3K p110α, promoting phosphorylation of Akt and overactivation of PI3K/Akt signaling pathway, in which the latter promoted invasion and metastasis in gastric cancer cells. 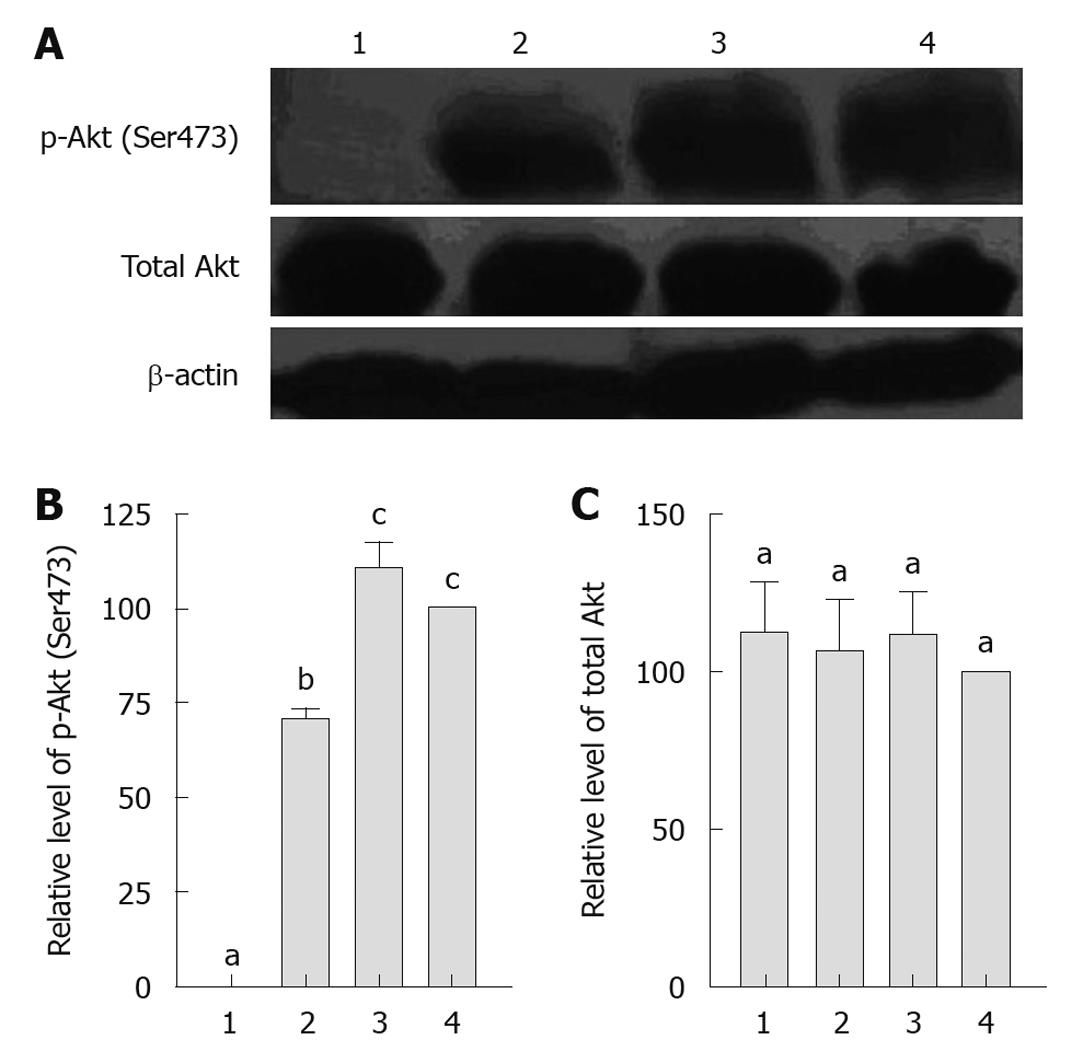 In recent years, although the morbidity and mortality rates of gastric cancer have fallen worldwide, the therapeutic efficacy of advanced gastric cancer is still unsatisfactory. In order to clarify the molecular mechanism of invasion and metastasis in gastric cancer, we investigated the mRNA and protein expression of PIK3CA in different gastric cancer tissues, as well as the effect of PIK3CA expression on activation of PI3K/Akt signaling pathway.

Interestingly, Woenckhaus et al[19] pointed out that increased expression of PIK3CA was associated with progression of dysplasia to an invasive squamous cell carcinoma. Akagi et al[20] found that PIK3CA mRNA over-expression was highly prevalent in esophageal squamous cell carcinoma samples by quantitative RT-PCR. Additionally, the presence of node metastasis was significantly higher in the group with positive staining for PIK3CA compared with the negative staining group immunohistochemically. Similar to their studies, weak or no expression of PIK3CA mRNA and protein was discovered in normal gastric mucosa, while strong expression was detected during the progression of primary gastric cancer to lymph node metastasis and distant metastasis in our study. Thus, up-regulation of PIK3CA was most likely linked to tumor invasion and metastasis.

In a previous study, deregulation of PI3K/Akt pathway frequently found in a great number of human malignant tumors was closely related to tumor development[21]. Akt, also known as protein kinase B, the major downstream effector of PI3K, is activated by phosphoinositide-dependent protein kinase 1, which is recruited and phosphorylated by activation of PI3K[22]. Increasing studies have shown that Akt plays an important role in many physiological processes, such as cell growth and proliferation, apoptosis, cell motility and invasion[23,24]. In this study, we found for the first time that p-Akt (Ser473) was lost or not expressed in normal gastric mucosa tissues through Western blotting analysis, while it was highly expressed in metastatic tissues compared with primary gastric cancer tissues. In addition, such observation is in good agreement with the expression profile of PIK3CA. This implied that up-regulation of PIK3CA could increase catalytic activity of PI3K, as suggested by Shayesteh et al[25] and Ma et al[26], and subsequently overactivated PI3K/Akt pathway to promote metastasis in gastric cancer.

These data, together with our previous findings, demonstrated that up-regulation of PIK3CA and resultant constitutive activation of PI3K/Akt signaling pathway are of primary importance in understanding the process of metastasis in gastric cancer. To date, because of no reliable clinical method available to predict metastasis in gastric cancer, increased expression of PIK3CA is expected to be a potential molecular marker for the early diagnosis of advanced gastric cancer. Meanwhile, PIK3CA, the most proximal pathway component, might be a better target for anticancer drug discovery than distal components such as Akt and mTOR.

Several molecular pathways are known to play a role in gastric cancer development and progression. Perhaps the most important pathway is the currently discovered PI3K/Akt pathway. Many studies have reported that mutations of the PIK3CA gene encoding the catalytic subunit p110α of PI3K, are contributed to dysregulation of PI3K/Akt pathway.

Previous reports have highlighted the importance of mutations of PIK3CA oncogene in various carcinogenesis. In this study, the authors reported for the first time that up-regulation of PIK3CA and resultant constitutive activation of PI3K/Akt pathway are of primary importance in understanding the process of metastasis in gastric cancer.

The data presented in this paper, together with the authors’ previous findings, suggested that up-regulation of PIK3CA is expected to be a potential molecular marker for the early diagnosis of advanced gastric cancer. Meanwhile, PIK3CA, the most proximal pathway component, might be a better target for anticancer drug discovery than distal components such as Akt and mTOR.

PIK3CA gene, encoding the key catalytic subunit p110α of PI3K, is located on chromosome 3q26.3. AKT, a serine/threonine kinase, serving as the major downstream effector of PI3K, regulates many biological processes, such as proliferation, apoptosis and growth.

This descriptive study focuses on the important role of PIK3CA in PI3K/Akt pathway in gastric carcinogenesis. The authors demonstrated the data indicating that PIK3CA could be a promising indicator for metastasis from gastric carcinomas. The study is well written.