METHODS: We examined the records of 132 patients who were diagnosed with uncomplicated cecal diverticulitis and a first attack during an 8-year period. The diagnosis of uncomplicated diverticulitis was made based on imaging findings, such as inflamed diverticulum or a phlegmon with cecal wall thickening. Concurrent appendiceal dilatation from 8 to 12 mm was observed in 36 patients (27%). One hundred and two patients were treated initially with antibiotics only, whereas 30 underwent laparoscopic treatment, including partial cecectomy (n = 8) or appendectomy with diverticulectomy (n = 9) or appendectomy alone (n = 13). We compared clinical outcomes in both groups over a median follow-up period of 46 mo.

RESULTS: All patients were successfully treated with initial therapy. Of the 102 patients who initially received only antibiotic treatment, 6 (6%) had a recurrence (3 in the cecum and 3 in the ascending colon or transverse colon) during the follow-up period. Five of these patients were managed with repeated antibiotic treatment and 1 underwent ileocolic resection for perforation. Of the 30 patients treated by the laparoscopic approach, 2 (7%) had a recurrence (ascending colon) which was treated with antibiotics.

Right colonic diverticulitis is a common complication of right-sided diverticular disease and has a higher prevalence in Oriental countries than in Western countries[1]. Cecal diverticulitis is uncommon and is rarely detected preoperatively because it is usually misdiagnosed as appendicitis[2].

There has been some controversy regarding the optimal management of cecal diverticulitis. Some surgeons recommend surgical treatment, claiming that cecal diverticulitis does not usually resolve with medical therapy and has a high rate of recurrence with complications[3-5]. In contrast, other authors favor conservative treatment, stating that it is a safe and effective treatment regimen with a low recurrence rate[6-8]. Differences due to ethnicity or pathophysiological mechanisms including disease state may account for this variation in outcome.

With the increasing use of radiologic evaluation for right lower quadrant (RLQ) pain, the diagnosis of cecal diverticulitis is possible and may be assessed in both uncomplicated and complicated cases[9].

The aim of this study was to evaluate the treatment outcomes of suspected uncomplicated cecal diverticulitis diagnosed by radiologic imaging. To this end, we reviewed the long-term recurrence in a series of Asian patients who received initial antibiotic management, and compared this to laparoscopic treatment.

During an 8-year period (2001 to 2008), 8814 patients admitted with RLQ pain were assessed (Table 1). We performed routine computed tomography (CT) in these patients, and in some indeterminate cases, adjuvant specific appendiceal ultrasonography was performed.

Clinical information was reviewed retrospectively using an existing database which revealed 164 patients with suspected cecal diverticulitis following radiologic evaluations. All patients were of Asian descent with a first documented attack. Twenty one patients who underwent surgery for suspected perforation or generalized peritonitis and 11 patients who were lost to follow-up were excluded, thus, 132 patients with suspected uncomplicated cecal diverticulitis were included in the present study. Uncomplicated diverticulitis was diagnosed as inflamed diverticulum or a phlegmon with cecal wall thickening, using radiological imaging (Figure 1). None of the patients had symptoms of peritonitis or the formation of an inflammatory mass. Diverticulitis accompanied by appendiceal dilatation from 8 to 12 mm was observed in 36 patients (27%). 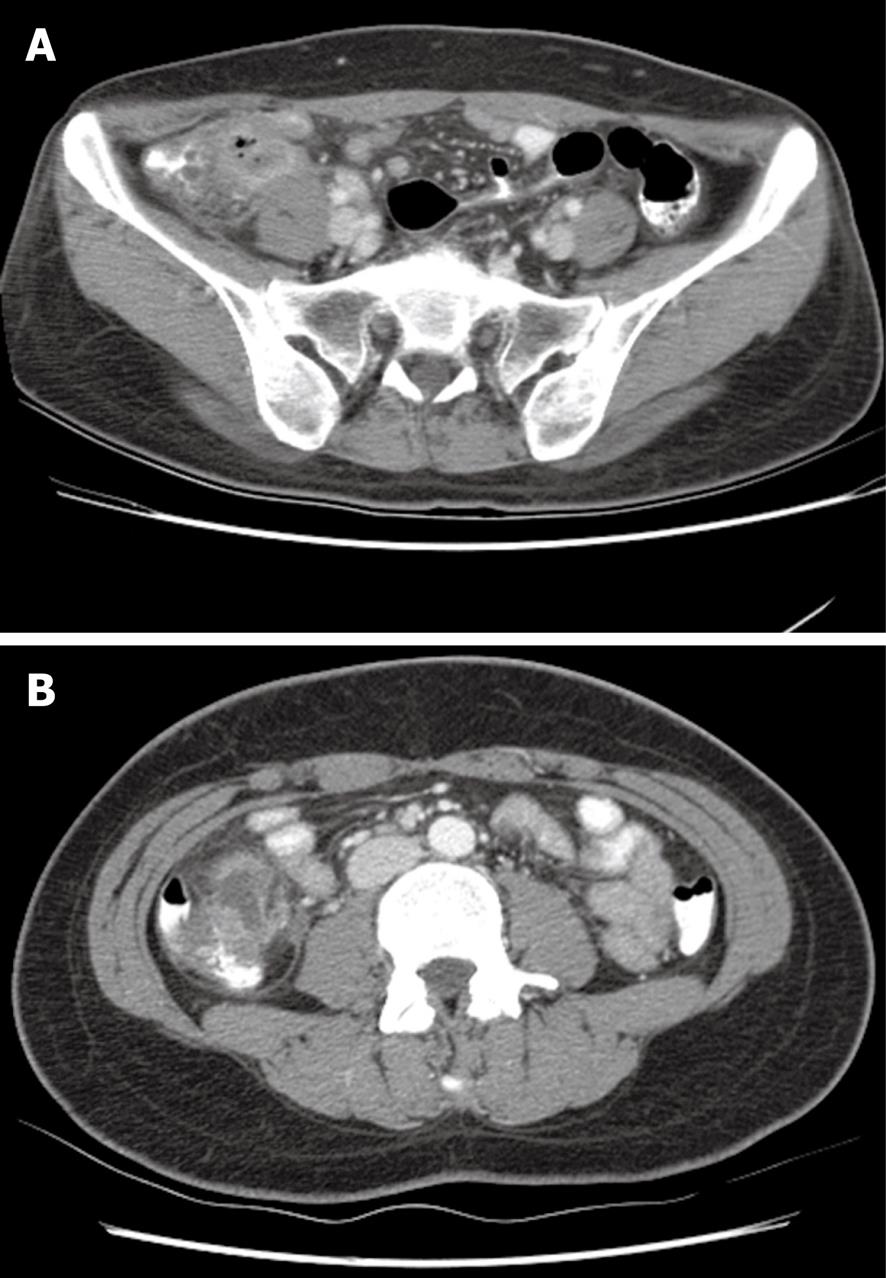 The antibiotic regimen consisted of a second generation cephalosporin and metronidazole which was administered for 4-7 d or until the abdominal pain subsided. Most patients received intravenous antibiotics, however, 8 received oral antibiotics. The diagnosis was confirmed by CT (3-D colon) or colonoscopic examination in all patients at least once during the follow-up period.

Laparoscopic treatment consisted of partial cecectomy including appendix and diverticulum in 8 patients, using one or two endoGIA (Covidien, Mansfield, MA, USA). Diverticulectomy was performed in 9 patients where technically feasible, especially in the case of diverticula arising from the anterior aspect of the cecum. Concurrent appendectomy was performed to prevent future diagnostic confusion. The remaining 13 patients underwent appendectomy alone, followed by direct visualization of the inflamed diverticulum located in the lateral or posterior side of the cecum.

Patients were reviewed using their medical records and were interviewed on the telephone to identify any recurring symptoms and surgical interventions. The median follow-up time was 46 mo (range, 10-112 mo). Using this information, we evaluated the outcomes including readmission and recurrence rate between the two groups using the χ2 and t-tests.

Of the 102 patients in group 1, 7 had undergone a previous appendectomy. Eight patients were suspected of having a pericolic abscess and 31 patients had a visible fecalith on diagnostic imaging. Twenty five patients had concurrent appendiceal dilatation. All patients were successfully treated without complications.

Of the 30 patients in group 2, 2 had a pericolic abscess and 11 had concurrent appendiceal dilatation. The operative findings revealed an inflamed diverticulum and phlegmon with adjacent bowel wall thickening. All patients with partial cecectomy or diverticulectomy were confirmed as having diverticulitis on pathologic examination. Appendix examination revealed that most patients (21/30) had secondary appendiceal serositis and the remaining patients had a normal appendix. The postoperative period was uneventful in most patients with the exception of 2 who developed wound infections. Group 2 patients had a higher white blood cell count at admission, a longer hospital stay, and higher medical costs.

During the follow-up period, 2 patients died of unrelated causes (liver cirrhosis, pancreas cancer). To date, all other patients are alive. Recurrence was defined as the development of the same symptoms and radiological evidence of diverticulitis.

Of the 102 patients in group 1, 6 had recurrence at a median of 15 mo (range, 5-25 mo) after treatment. Three recurrences were in the cecum and 3 were in the ascending colon or proximal transverse colon. Of these 6 patients, 5 were successfully treated with antibiotics and 1 underwent laparoscopic ileocolic resection for perforated diverticulitis. Two patients were readmitted due to RLQ pain, however, these patients were treated medically and did not undergo surgery for appendicitis.

In group 2, 2 patients (7%) had recurrence 21 mo and 24 mo after treatment and required further antibiotic treatment. Of these patients, 1 had undergone partial cecectomy and the other had undergone diverticulectomy. The location of recurrent diverticulitis was the distal ascending colon and hepatic flexure colon in each. One patient readmitted with RLQ pain, was treated medically (Table 2).

Although cecal diverticulitis is an uncommon condition and is preoperatively almost indistinguishable from appendicitis, it has a high prevalence in the Oriental population[10,11].

Laparoscopic minimal surgery, such as diverticulectomy or partial cecectomy, is a good therapeutic option, however, the procedure is not always easy. Simple diverticulectomy using one or two staplers may be performed in some cases, but concerns regarding conversion or extended dissection of inflammatory tissue have been raised. The location of a diverticulum may be associated with technical difficulties. Diverticulitis that originates from the anterior aspect of the cecum may be more easily managed. However, diverticulitis found in the lateral or posterior aspect of the cecum may result in a difficult laparoscopic procedure. A phlegmon with adjacent inflammation also complicates the situation for surgeons.

To our knowledge, laparoscopic diverticulectomy, particularly in cases of cecal diverticulitis, has been rarely reported[16,17]. A possible explanation for this is that the disease is uncommon and therefore, this procedure may be difficult and risky, if technically infeasible or performed by an inexperienced surgeon.

Treatment with both antibiotics and laparoscopic surgery carry a risk of recurrence. Extensive surgery was often performed during re-operation in order to decrease the risk of leaving an inflamed diverticulum. However, we presume that the clinical features of patients with cecal diverticulitis might differ between the Asian and non-Asian population. In most Asian patients, a low recurrence rate may be expected and non-operative management could be performed, even in recurrent cases[18-21].

Moreover, diverticulitis does not always recur in the same place. Multiple diverticula are often found in Asian patients with cecal diverticulitis. We also demonstrated right-sided colonic recurrent diverticulitis at a different site.

Many clinicians prefer non-operative management if right-sided uncomplicated diverticulitis is recognized preoperatively and may achieve long-term remission and control of the disease. We also believe that the natural course of cecal diverticulitis has mostly benign features. Many patients were successfully treated with initial antibiotic management at the time of the first attack and had a low readmission and recurrence rate. Moreover, patients with recurrence may be retreated non-operatively. These findings suggest that cecal diverticulitis, if not combined with definite complications, seems to have a benign nature and may be treated non-operatively.

The treatment of complicated cecal diverticulitis or a suspected mass is less controversial due to high morbidity and unexpected pathologies[22]. Surgical treatment is well accepted in these cases.

In conclusion, we suggest that initial antibiotic management is an effective treatment option for suspected uncomplicated cecal diverticulitis diagnosed by radiological evaluation and shows comparable long-term results in the prevention of recurrence, to that of laparoscopic treatment in Asian patients.

The efficacy of initial antibiotic management for suspected uncomplicated cecal diverticulitis diagnosed by radiological imaging has not been fully addressed.

Recent studies have reported good outcomes following antibiotic management of uncomplicated diverticulitis. However, there have been few reports on cecal diverticulitis which is common in Asian patients. Cecal diverticulitis is not easily differentiated from appendicitis. Therefore, many clinicians are concerned about the long-term recurrence rate following initial non-operative management, compared with surgical treatment.

Uncomplicated diverticulitis was defined as inflamed diverticulum or a phlegmon with cecal wall thickening, and was not associated with complications, such as perforation, obstruction, or visible abscess.

Over all, the study demonstrates success of antibiotic alone therapy in a large number of patients suffering from cecal diverticulitis - a rather uncommon entity.