Constipation and fecal impaction are frequent and distressing complaints in pediatric gastroenterology. Especially in neurologically handicapped children, treatment of severe forms of slow-transit constipation (STC) can be difficult. In the majority of cases, STC is of unknown etiology. However, in recent years, there is growing evidence that interstitial cells of Cajal (ICCs), which serve as electrical pacemakers and generate spontaneous electrical slow waves in the gastrointestinal tract, might play an important role in the pathophysiology of STC. It remains unclear whether morphological ICC alterations seen in affected patients are based on congenital developmental anomalies, or whether they are a consequence of long-term constipation with secondary damage of the gastrointestinal nervous system. To the best of our knowledge, we present the first case of a patient with histological alterations in ICC morphology who displayed multiple alterations of c-kit at the level of mRNA. The protein encoded by c-kit is the receptor tyrosine kinase Kit (CD117), which is crucial for development and function of ICCs. Therefore, these findings provide a new explanation for congenital alterations of ICC development that result in gastrointestinal motility disorders.

Chronic constipation is one of the most common complaints of patients in pediatric gastroenterology. Most cases can be classified as a functional disorder and are usually managed by dietary modifications and administration of oral laxatives.

Nevertheless, during childhood, some patients develop severe forms of slow-transit constipation (STC), associated with prolonged bowel passage and resistance to medical treatment. Clinical symptoms can include low stool frequency, lack of urge to defecate, abdominal distention, bloating, and abdominal discomfort[1]. Although the pathophysiology has not yet been fully understood, visceral neuropathies[2], dysregulation of neurotransmitters[3], degeneration of enteric neurons[4], and alterations of interstitial cells of Cajal (ICCs)[5] are possible etiological mechanisms that have been discussed in the literature[6].

ICCs form a network that is widely distributed in all layers of the gastrointestinal tract. Myenteric ICCs are located to the myenteric plexus and integrate between the enteric nervous system and the muscle components of the bowel. In recent years, there has been growing evidence that ICCs serve as electrical pacemakers and generate spontaneous electrical slow waves in the gastrointestinal tract[7]. Slow waves organize gut contractions into phasic contractions that are the basis for peristalsis and segmentation. Important new insights have been gathered by studies on animals with loss-of function mutations in the c-kit signaling pathway[8,9]. The protein encoded by c-kit is the receptor tyrosine kinase Kit (CD117). The activation of Kit is crucial for development and function of the ICC phenotype in the gastrointestinal tract. Functional studies in c-kit-knock-out mice and in animals with specific mutations that modify the binding of the receptor ligand stem cell factor (SCF) have shown grossly underdeveloped networks of ICCs[10] with significantly reduced gastrointestinal motility[9]. Recognition of these physiological properties in animals has led to studies of ICCs in several human gastrointestinal motility disorders, especially in cases of idiopathic megacolon and STC. Nowadays, there is no doubt that damage or dysfunction of ICCs results in gut dysmotility.

Here, we present a new case of a patient with specific genetic alterations of the receptor tyrosine kinase Kit that led to abnormal ICC architecture and function in the gut, with severe chronic constipation.

The male patient was born to a healthy woman with an inconspicuous family history at the 36th gestational week. His birth weight and height were below the 3rd percentile. Vital signs were normal at birth (Apgar score 9/10/10). Physical examination showed cleft palate, low-set deformed ears, a flat nasal bridge, brachycephalus, strabismus, and oblique eye fissures with epicanthic skin folds. Laboratory investigations at birth revealed no abnormal findings. Chromosomal analysis did not detect any abnormalities. Developmental delay became evident by the end of the first year, accompanied by a significant failure to thrive. The patient neither learned to speak nor to walk unassisted. Spoon-feeding was possible, but was supported by a percutaneous gastrostomy.

At the age of 14 years, a malignant melanoma on the left lower leg was diagnosed and subsequently excised. In recent years, the patient developed recurring episodes of abdominal pain and chronic constipation, without evidence of stool-withholding behavior. Laboratory tests demonstrated no electrolyte abnormalities, anemia, hypothyroidism, or evidence of celiac disease or colitis. We used different laxatives without much benefit. By the age of 16 years, the patient had developed a severe megacolon and mechanical assistance for defecation was needed daily. Hinton’s test showed considerably extended intestinal transit time. Although usually not the first choice in treating patients with slow transit, double-barreled ileostomy construction was performed to avoid further complications. During the procedure, we took intestinal biopsies from the ileum and sigmoid colon for histopathological analysis. After surgery, no laxative therapy was needed. Colonic diameter and the patient’s complaints were significantly reduced.

Histological examination of the intestinal biopsies revealed abnormal morphology and an extremely low density of c-kit-positive ICCs in the colon (Figure 1). Immunohistochemistry showed normal staining of mast cells and neurons in the gut mucosa and submucosa. To investigate whether the lack of ICCs might be due to functionally relevant genetic alterations in the synthesis of the tyrosine kinase Kit, we used mast cells of the patient as easy-to-obtain Kit-expressing cells. Multiple genetic alterations of Kit were detected at the level of mRNA in mast cell progenitors, which resulted in changes of the deduced amino acid sequence (Figure 2): E270K, insertion of intron 20 between exons 20 and 21, which created a stop codon at amino acid position 935; and six isoforms of transcripts of c-kit, which are due to alternative pre-mRNA splicing (ins Q252; del GNNK510-513; del S715). 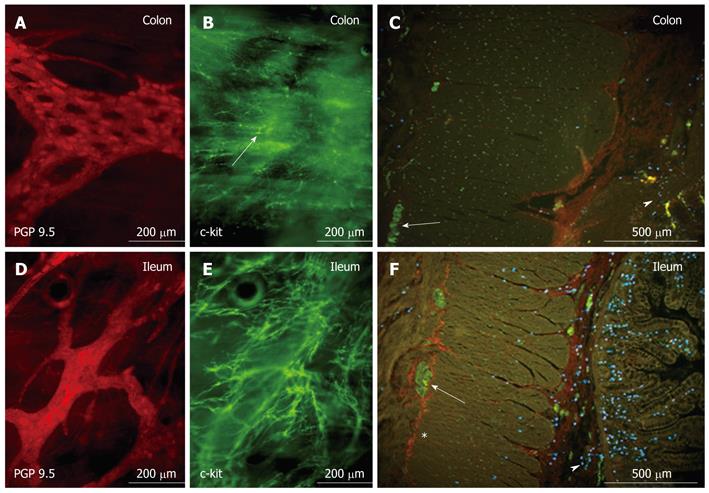 Figure 1 Whole mount preparation of the myenteric plexus of the patient’s colon (A and B) and ileum (D and E), which shows abnormal morphology (arrow in B) and extreme low density of c-kit-positive interstitial cells of Cajal in the colonic biopsy specimen (B), while a dense interstitial cells of Cajal network with normal cell morphology was present in the ileum (E). Also remarkable are the holes in the colonic ganglia (A), which are very uncommon in young patients. D shows normal morphology and density of ganglia and protein gene product (PGP)-positive myenteric neurons in the ileum. Cross-sections of colon (C) and ileum (F) illustrate the normal appearance of myenteric interstitial cells of Cajal (ICCs) (*c-kit, red) in the ileum, but the complete absence of myenteric ICCs in the colon. (A and D: staining for the neuronal marker PGP 9.5, red; PH164, The Binding Site, Birmingham, UK; B and E: staining for c-kit as ICC marker, green; PC34, Oncogene, Boston, MA, USA; C and F: PGP-positive neurons (green) in a ganglion (arrow), mast cells in mucosa/submucosa (arrowhead), stained by a tryptase antibody, blue; MAB1222, Chemicon, Schwalbach, Germany. 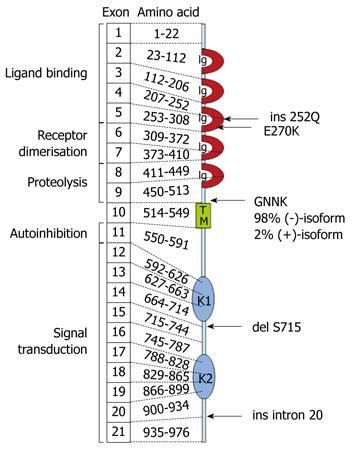 However, the examination of genomic mast cell DNA for the presence of another well known mutation of c-kit, the gain-of-function mutation D816V, which is found in > 80% of cases of systemic mastocytosis, was negative. In bone marrow examination, normal hematopoietic tissue was found, and in laboratory work-up, normal values for tryptase in serum and histamine metabolites in urine were detected. The absence of any hematopoietic abnormalities in our patient suggests appropriate secretion of SCF.

In patients with idiopathic megacolon and STC, it has been proposed that colonic dysmotility might result from alterations of neuronal cells, smooth muscle cells and/or ICCs in the gastrointestinal tissue. By now, histopathological and functional abnormalities of all three final effectors of gastrointestinal sensomotoric function have been reported in the literature. However, it still remains unclear whether these changes are primary, secondary or merely epigenomic[11]. Only a few specific histopathological abnormalities have been found and described to date[12]. Concerning ICCs, there have been two studies of patients with idiopathic megabowl[5,13] and four studies of patients with idiopathic constipation with decreased ICC density[6,14-16]. By contrast, another study of 63 patients with megacolon has shown no consistent alterations in colonic ICC histology[17].

In our patient, the biopsy specimen showed only a few ICCs in the ileum and complete absence of ICCs in the sigmoid colon, which is similar to single patients reported by Sabri et al[18] and Kenny et al[19]. However, in our patient, mutational analysis of Kit revealed multiple specific genetic alterations at the level of mRNA, which could have resulted in a loss of function of the Kit protein. In particular, mRNA that contains the premature stop codon at amino acid position 935 can be rapidly degraded via nonsense-mediated mRNA decay[20]. Accordingly, synthesis of the corresponding Kit protein would be reduced. The functional relevance of the six isoforms of Kit (Figure 2) cannot be assessed on the basis of the present data. In particular, the two GNNK-isoforms differ markedly in their functional activities, with the GNNK(-) isoform showing tumorigenic potential[21,22], which was almost exclusively detected in our patient. The point mutation E270K is probably only of minor relevance for the functional activity of Kit, because E270 is not highly conserved between species.

To date, animal studies have already shown that point mutations in the tyrosine kinase Kit correlate with abnormal intestinal contractions in vitro[23]. Accordingly, we suggest that the genetic alterations of Kit in our patient led to loss of protein function and to alterations in ICC architecture, and therefore, reduced bowel peristalsis. This hypothesis provides a novel intriguing explanation for congenital interference with ICC development in cases of STC.