AIM: To investigate the number of intestinal immunoglobulin A (IgA+) plasma cells and expression of intestinal IgA in mice with acute liver necrosis.

METHODS: A model of acute liver necrosis was established by intraperitoneal injection of galactosamine (GalN) and lipopolysaccharide (LPS). Sixty mice were randomly divided into one of 4 equal groups: normal control, acute liver necrosis, LPS, or GalN. Hematoxylin and eosin staining, immunohistochemistry, and an enzyme-linked immunosorbent assay were employed to assess liver and intestinal injury, count intestinal IgA+ plasma cells, and measure the expression level of IgA and interferon γ (IFN-γ) in the small intestinal mucosa of mice.

Patients with acute liver necrosis are at high risk for enterogenic infections. Enterogenic infections are an important cause of death in patients with acute liver necrosis associated with intestinal barrier injury, including immunological barrier injury[1,2]. Immunoglobulin A (IgA) is an important component of the intestinal immunological barrier and is the most abundant immunoglobulin at mucosal surfaces where it plays crucial roles in mucosal protection[3]. The protective barrier of the gastrointestinal system is impaired in IgA deficiencies, and IgA-deficient individuals have a tendency to develop gastrointestinal infections[4]. Previous studies have shown decreased levels of secretory IgA and decreased numbers of IgA+ plasma cells in the intestinal tract during stress and thermal injury suggesting that the humoral immune function was dramatically inhibited in these situations[5,6]. Intestinal IgA was also decreased in endotoxemia and intra-abdominal sepsis models[7,8].

Previous studies have primarily focused on mechanical barrier interruption in acute liver necrosis models[9]. So far, no studies have shown a role for the intestinal immunological barrier in acute liver necrosis. It has been reported that an increase in levels of interferon γ (IFN-γ), a TH1 cytokine, was related to tissue injury[10] and led to a decreased expression of IgA[11].

Sixty male BALB/c mice 6-8 wk of age (provided by the Laboratory Animal Center of the China Medical University) were housed under constant room temperature and humidity, and subjected to a 12 h light/dark cycle. Experiments were conducted in accordance with the Guiding Principles for the Care and Use of Laboratory Animals. Mice were equally and randomly divided into one of 4 groups: normal control, acute liver necrosis, lipopolysaccharide (LPS), or galactosamine (GalN). GalN (800 mg/kg body weight, Sigma, USA) and LPS (10 μg/kg body weight, Sigma, USA) were injected intraperitoneally to induce acute liver necrosis as previously described[12,13]. Serum, liver and proximal small intestinal tissues samples were obtained 9 h after GalN/LPS injection.

Intestinal IgA+ plasma cells were investigated by immunohistochemistry (IHC). Sections of proximal small intestine were deparaffined, and antigen retrieval was performed by pressure cooker boiling for 2 min in 10 mmol/L citrate buffer (pH 6.0). IHC analysis was performed using goat anti-mouse IgA (Zymed, USA, diluted 1:50) for 12 h at 4°C, and the secondary antibody (rabbit anti-goat IgG) was applied for 2 h at 37°C. Fresh peroxidase reaction mixture containing equal amounts of 0.02% hydrogen peroxide in H2O and 0.1% diaminobenzidine in H2O were prepared. Sections were mounted on Uvinert mountant (BDH, UK). Five fields of small intestinal mucosa lamina propria were examined in each section at high magnification (200 ×), and the number of IgA+ cells were counted (i.e. lymphocytes that stained a brownish-yellow color). The average number of IgA+ was calculated.

The levels of intestinal IgA were examined by enzyme-linked immunosorbent assay (ELISA). Intestinal tissue (50 μg) immersed in 1 mL (10 volumes, w/v) of phosphate-buffered saline (PBS) was incubated at room temperature for 15 min. Samples were vortexed, left to settle for 15 min, revortexed until all material was suspended, then centrifuged at 12 000 r/min for 10 min. The supernatant was collected and tested on an ELISA kit for IgA (Bethyl Laboratories, Montgomery, TX, USA). Briefly, 96-well microtiter plates were coated with goat anti-mouse IgA affinity purified antibody and incubated for 60 min, then washed with PBS, and each well was incubated with 1% bovine serum albumin in PBS to block any nonspecific binding. After washing with PBS containing 0.1% Tween-20, 100 μL test samples and 100 mol/L standards were added into each well and incubated for 60 min followed by incubation with peroxidase-labeled goat anti-mouse specific IgA antibody for 30 min. Then 0.1 mol/L acetate buffer containing 1 mg/mL ortho-phenylenediamine was prepared and 3 μL of the prepared solution in 10 mL of H2O2 was added to each well. The reactions were stopped by adding 25 μL of 2 mol/L sulfuric acid. The absorbance of each solution was determined at a wavelength of 450 nm.

Detection of IFN-γ in the intestinal mucosa

The small intestinal mucosa homogenate was prepared as described previously[8]. The levels of IFN-γ in the homogenate were measured by sandwich ELISA (Quantikine ELISA Kits, R&D Systems, Minneapolis, MN, USA) according to the manufacturer’s instructions.

Software SPSS 11.0 was used for statistical analysis. Each value was expressed as the mean ± SE, and compared by using one-way ANOVA, followed by the Tukey test. P < 0.05 was considered statistically significant. 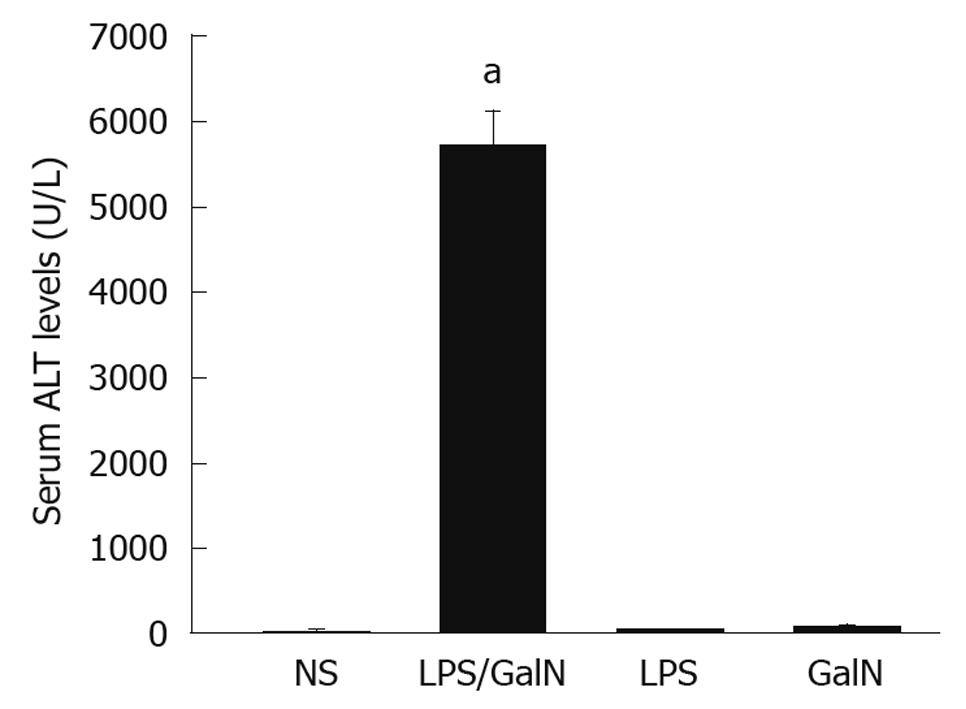 In the normal group, the liver clearly showed normal structure of both the hepatic lobuli and hepatic cords. In contrast, the livers from the acute necrosis group had severe hemorrhage, hepatic necrosis, acidophilic degeneration in some residual hepatocytes, disappearance of hepatic cords, and deranged structure of hepatic lobules. Acidophilic degeneration and swelling were observed in the LPS group and edematous and spotty necrosis, as well as a few hepatic cells with acidophilic changes were found in the GalN group (Figure 2). 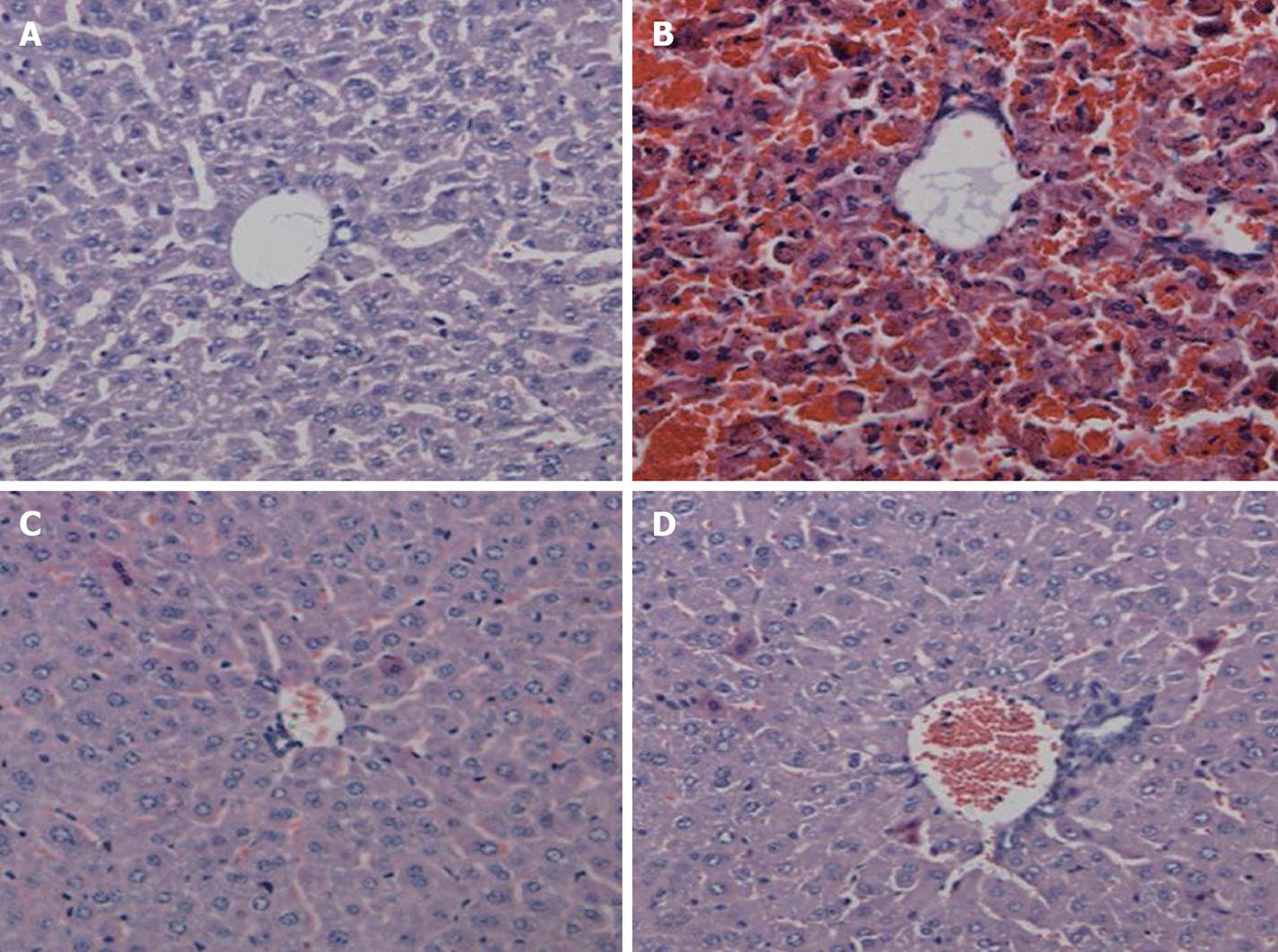 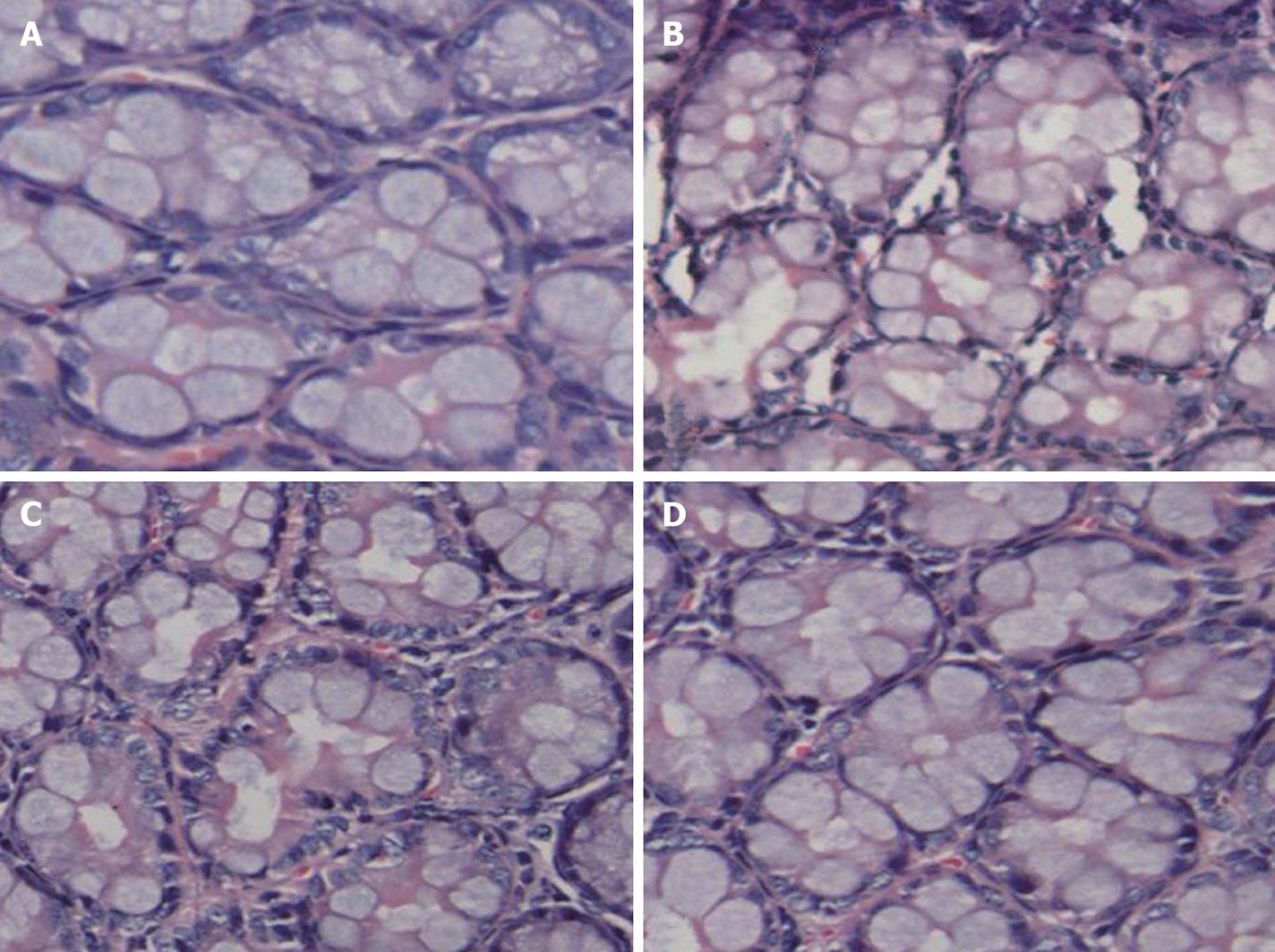 There were a slight increase in IFN-γ levels in LPS, GalN and acute liver necrosis groups, but no significant difference was noted compared with the normal group (P > 0.05, Figure 5C).

In agreement with previous reports[20,21], we found that injection of GalN/LPS induced increases in serum ALT and the development of severe hepatocyte necrosis. As the mortality of mice with acute liver necrosis was 53.3%, these findings indicate that the model employed to study IgA and IFN-γ was successful. In addition to the observed liver injury, loosened intestinal mucosa and some edematous and necrotic intestinal epithelial cells were also noted in the mice with acute liver necrosis. These features were not found in any of the other groups. These histological findings of intestinal mucosal injury in acute liver necrosis were consistent with other studies[14].

IgA is the most abundant immunoglobulin present on all mucosal surfaces, where it plays crucial roles in mucosal protection[3]. IgA is produced and released as a J chain-linked dimer by resident IgA+ plasma cells in mucosal tissues, including the extensive lamina propria of the intestine[22]. For decades, it has already been known that IgA plays a protective role in mucosal immunity. IgA exerts its protective effects via 3 primary mechanisms. First, IgA serves as an immunologic barrier which inhibits binding of organisms to mucosal surfaces. Next, the normal movement of IgA from the basilar to apical region of epithelial cells suggests that it may be effective in neutralizing intracellular pathogens. Finally, pathogens bound to IgA are taken up by macrophages via phagocytosis[23]. An additional property of IgA is its inability to trigger the release of inflammatory mediators through receptors specific to its Fc domain[24-26].

In this study, it was also found that the decreased IgA expression in acute liver necrosis coincided with a decline in IgA+ plasma cells. One explanation for this could be that the decrease in the number and function of IgA+ plasma cells leading to a simultaneous reduction in IgA secretion. At present, the specific pathogenesis and progression of acute liver necrosis remains unclear.

Inflammatory mediators are thought to be involved in the development and progression of acute liver necrosis. Previous studies reported that serum levels of a number of inflammatory factors, such as IFN-γ, are elevated in patients with severe liver injury[14,33]. In addition, IFN-γ is known to downregulate IgA expression[34].

Enterogenic infection is an important cause of death in patients with acute liver necrosis. Intestinal immunological barrier injury plays a vital role in the pathophysiology of enterogenic infection. Immunoglobulin A (IgA) is an important component of the intestinal immunological barrier and is the most abundant immunoglobulin present on mucosal surfaces, where it plays crucial roles in mucosal protection.