AIM: To evaluate the validity of the estimated glomerular filtration rate (eGFR) as a preoperative renal function parameter in patients with gastric cancer.

METHODS: A retrospective study was conducted in 147 patients with gastric cancer. Preoperative creatinine clearance (Ccr), eGFR, and pre- and postoperative serum creatinine (sCr) data were examined. Preoperative Ccr and eGFR were then compared for their reliability in predicting postoperative renal dysfunction.

CONCLUSION: Preoperative eGFR is as effective as Ccr for predicting postoperative renal dysfunction. eGFR should therefore be used as an indicator of preoperative renal function in place of Ccr since it is a cheaper and easier to perform test.

The creatinine clearance (Ccr) test has been used as a gold standard for evaluation of preoperative renal function in patients with gastric cancer[1,2]. However, it is known that Ccr is not strictly equivalent to glomerular filtration rate (GFR) because of the intrinsic secretion of creatinine into urine from tubuli[3]. Furthermore, in order to measure Ccr, it is necessary to collect 2-h or 24-h urine samples, which is inconvenient in older patients and relatively expensive to implement.

Chronic kidney disease (CKD) is defined as a person having GFR less than 60 mL/min, and the frequency of CKD in the Japanese population is around 10%[4]. Therefore, in patients with gastric cancer, the detection of CKD before operation is a crucial matter to prevent postoperative renal complications. If there are other tests which reflect GFR more accurately and that can be performed easily and cheaply, this would be valuable in a clinical setting[5,6].

Although inulin clearance can be used for measuring GFR, it is not a standard preoperative renal function test because of its cumbersome methodology, and alternatively, the Ccr test has been used. In 1999, Levey et al[7] reported an equation for the estimation of GFR. The Modification of Diet in Renal Disease (MDRD) equation includes age, sex, race, serum creatinine (sCr) value, serum blood urea nitrogen value, and serum albumin value. It was suggested that the MDRD equation precisely reflects the GFR in Caucasians but not in Asians, and therefore an equation for estimating the GFR for Japanese individuals (eGFR) was postulated[8,9]. eGFR is calculated using three parameters: sex, age, and sCr. If eGFR is at least as precise as Ccr for estimation of postoperative renal dysfunction, it would be valuable as a preoperative renal function parameter for patients with gastric cancer, as eGFR is easier and cheaper to measure. To clarify this issue, therefore, we analyzed Ccr and eGFR retrospectively in a series of gastric cancer patients.

One hundred and forty-seven patients diagnosed histologically as having gastric cancer who underwent surgery between January 2003 and December 2005, and for whom preoperative Ccr data were available, were enrolled in the present study. The patients’ backgrounds are summarized in Table 1. Gastrectomy was performed based on the guidelines of the Japan Gastric Cancer Study Group[10]. Basically, patients took meals until lunch on the day before operation, and no hyperalimentation was performed. As antibiotics, 2 g/d of cephalosporin was administered from the day of the operation for 3 d.

The reliability of preoperative Ccr and eGFR for detecting postoperative renal dysfunction was analyzed.

Data were expressed as actual number of patients or mean ± SD. χ2 test was used for two-group comparisons. Statistical analyses were performed by using Graphpad software version 4.0. Significance of correlations was calculated by the Spearman correlation coefficient test. Differences at P < 0.05 were considered significant. 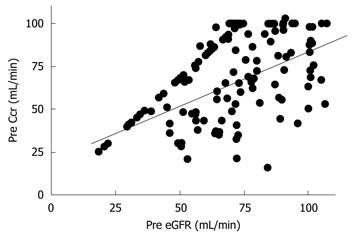 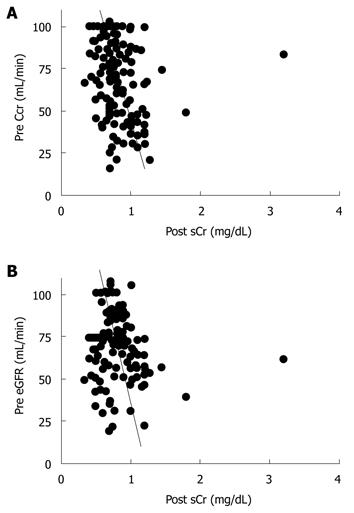 The present study showed that eGFR was as equally reliable as Ccr for assessment of preoperative renal function in patients with gastric cancer.

To date, Ccr has been used as a preoperative renal function parameter in patients with gastric cancer. Ccr is measured by 24-h or 2-h urine collection, and it has been suggested that either method can sometimes be inappropriate because of the difficulty involved in implementation, especially in older patients. Furthermore, there is a dissociation between Ccr and GFR in individuals with a low GFR[1]. Although sCr is a simply determined parameter for estimating renal function, it is not a reliable indicator of preoperative renal function because it is easily influenced by sex, muscle volume, and exercise. Also, sCr usually remains normal until GFR decreases to 50 mL/min[11].

GFR has not been used as a gold standard of preoperative renal function because measurement of inulin clearance is more labor-intensive than measurement of Ccr. However, the establishment of the MDRD equation by Levey et al[7] in 1999, and its modification postulated by the Japan Kidney Association, has made it possible to estimate GFR[8,9]. Therefore it is expected that eGFR will replace Ccr in various clinical settings.

Cystatin C is a cysteine protease and a member of the cystatin super family. Cystatin C is excreted from the glomerulus and reabsorbed by the proximal tubuli, and has been used as a marker for GFR[12,13]. sCr is influenced by prerenal factors, such as muscle volume; on the other hand, cystatin C is not influenced by sex, age, and other prerenal factors. In this retrospective study, cystatin C was not included as a parameter; it would be valuable to evaluate the relationship between eGFR and cystatin C as a preoperative renal function test of gastric cancer.

We conclude that eGFR is as equally valuable as Ccr as an indicator of preoperative renal function in patients with gastric cancer, and that eGFR may now be used in place of Ccr in view of the former’s clear medical and socioeconomic advantages.

Creatinine clearance (Ccr) is not strictly equal to glomerular filtration rate (GFR). It has been accepted that estimated GFR (eGFR) is equal to measured GFR in chronic kidney disease. However, there have been no previous studies regarding the reliability of eGFR as a preoperative renal function test in gastric cancer patients.

If eGFR is as good as Ccr as a preoperative renal function test, eGFR may replace Ccr because of its simplicity of measurement.

I think the conslusion should state "may be as good" not be as categorical as eGFR should be used instead of Ccr. This study based on a 147 patient is a good proof of principle but certainly does not have the power to change the standard of care.