METHODS: A total of 634 gastric cancer patients who underwent curative resection (R0) of lymph nodes at distal gastrectomy in 1995-2004. Correlations between positive nodes and retrieved nodes, between rN and retrieved nodes, and between rN and negative lymph node (LN) count were analyzed respectively. Prognostic factors were identified by univariate and multivariate analyses. Staging accuracy of the pN category (5th UICC/TNM system) and the rN category was compared according to the survival rates of patients. A linear regression model was used to identify the relation between rN and 5-year survival rate of the patients.

RESULTS: The number of dissected LNs was related with metastatic LNs but not related with rN. Cox regression analysis showed that depth of invasion, pN and rN category were the independent predictors of survival (P < 0.05). There was a significant difference in survival between LN stages classified by the rN category or by the pN category (P < 0.05). However, no significant difference was found in survival rate between LN stages classified by the pN category or by the rN category (P > 0.05). Linear regression model showed a significant linear correlation between rN and the 5-year survival rate of gastric cancer patients (β = 0.862, P < 0.001). Pearson’s correlation test revealed that negative LN count was negatively correlated with rN (P < 0.001).

Between January 1995 and November 2004, 1289 patients diagnosed as primary gastric cancer were treated with curative resection at Department of Oncology, Fujian Medical University Union Hospital (Fuzhou, China). Of the 1289 patients, 709 underwent distal gastrectomy, 75 were excluded from the study for T4 lesions in order to avoid data heterogeneity due to more extensive resections and higher positive margins. Finally, 634 patients were enrolled in this study. Curative surgery was defined as complete tumor removal with no macroscopic residual tumor, no invasion of carcinoma cells in the margin, and no evidence of distant metastasis. Clinical and histopathologic data about each patient were classified according to the Japanese Classification of Gastric Carcinoma (JCGC)[12]. Lymph nodes were meticulously dissected from the en bloc specimens, and the dissected lymph nodes were classified by surgeons who reviewed the excised specimens after surgery based on the JCGC. Based on the 5th edition of UICC/TNM system[13], pN category was defined as pN0 with no metastatic lymph nodes, pN1 with 1-6 metastatic lymph nodes, pN2 with 7-15 metastatic lymph nodes, and pN3 with > 15 metastatic lymph nodes, respectively. rN intervals were determined using the best cut-off approach and the survival rate of patients (log-rank statistic) was considered a dependent variable. The best-fit cut-off values of rN intervals were rN0: 0%, rN1: 1%-20%, rN2: 21%-50%, and rN3: > 50%, respectively. The patients were followed up by trained investigators through e-mail, telephone, visiting patients or recording the consultations of patients at the outpatient clinic. The survival time was the time when diagnosis was made to the last contact, or to the date of death, or to the date when the survival information was collected. All surviving patients were followed up for more than 5 years. The median follow-up time of the entire cohort was 62.0 mo (range 1-172 mo). A total of 591 patients were followed up, accounting for 93.2%.

Pearson’s correlation coefficient (r) was used to study the relations between positive nodes and retrieved nodes, between rN and retrieved nodes, and between rN and negative LN count. Survival rate was calculated with the Kaplan-Meier method. Cox proportional hazard model was used in multivariate analysis, with a backward elimination model for all covariates. A linear regression model was established to correlate rN with survival based on Kaplan-Meier 5-year survival estimates at each rN interval, using 5% of rN interval as an independent variable. P < 0.05 was considered statistically significant. All statistical analyses were performed using the statistical package for social science (SPSS) version 13.0 for Windows.

The 5-year survival rate of the entire cohort was 57.6%. The clinicopathological variables tested in univariate analysis are shown in Table 2. The factors influencing the 5-year survival rate were tumor diameter (P = 0.036), pathology types (P = 0.003), depth of invasion (P < 0.001), pN category (P < 0.001) and rN category (P < 0.001). The covariates of gender (P = 0.991), age (P = 0.423), tumor location (P = 0.058) and digestive tract construction (P = 0.064) had no significant influence on the survival rate. Multiple survival rates were calculated with the Cox’s proportional hazard regression model. In order to confirm the influence of rN, the prognostic factors including tumor diameter, pathology types, depth of invasion and pN category except for rN category in univariate analysis were analyzed by stepwise regression. As a result, two independent prognostic parameters, namely depth of invasion (P < 0.001) and pN category (P < 0.001), were obtained. When rN category was included in the Cox’s regression, the two independent prognostic parameters were also obtained. The risk ratios and their 95% confident interval are listed in Table 3. 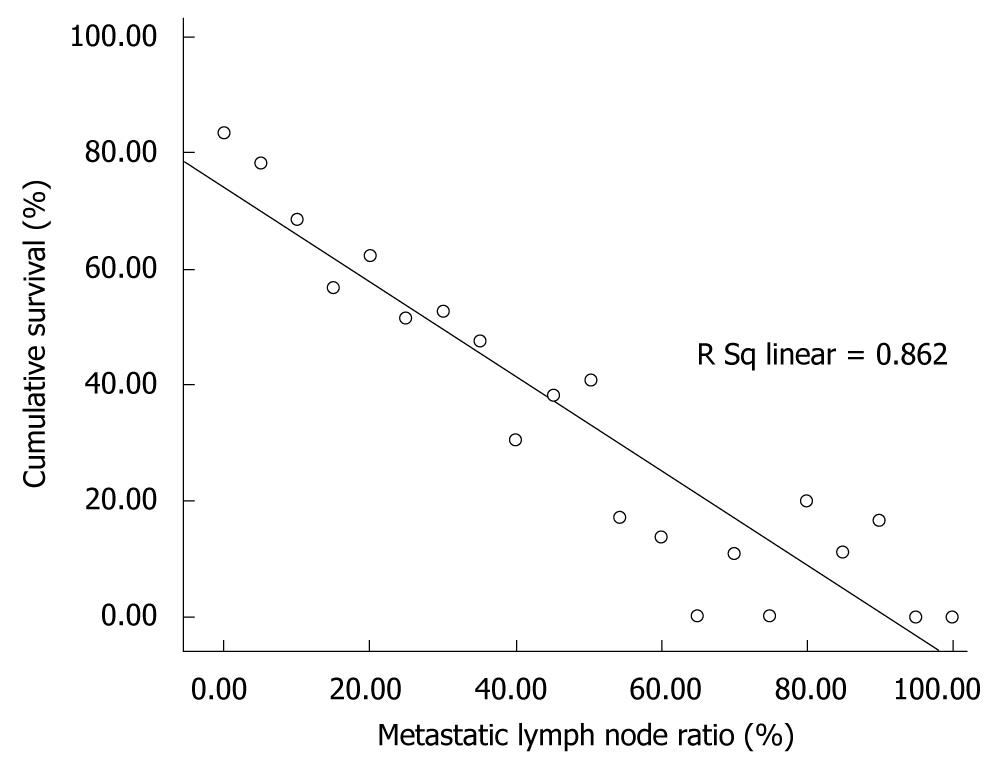 Fukuda et al[20] compared the pN category of the UICC/TNM in 1997 with a classification based on the metastatic lymph node ratio in patients who underwent R0 resection using the regression analysis, and identified that the metastatic lymph node ratio is the most important prognostic factor for gastric cancer. The results of univariable and multivariable analyses of potential prognostic factors in this study showed that the rN category was one of the independent prognostic parameters. Kunisaki et al[21] analyzed 1472 early gastric cancer patients undergone curative gastrectomy, and found that rN can identify subsets of patients with a significantly different survival rate within UICC/TNM pN1, pN2 and pN3 categories, suggesting that the outcome of patients with the same number of metastatic nodes, or with a larger number of retrieved LNs, is unfavorable. In the present study, however, a significant difference was observed in survival rates between lymph-node stages classified by the rN category or by the UICC pN category, but no significant difference was found in survival rates between lymph-node stages classified by the UICC pN category or by the rN category, indicating that the UICC/TNM classification can demonstrate stage migration and heterogeneous stratification for disease-specific survival. However, the metastatic lymph node ratio showed less stage migration and homogenous stratification in this study. The N category is currently defined by the number of positive nodes, but routine H&E staining may not exactly reflect the prognosis of lymph node metastasis due to lymph node micro-metastasis[22-25]. Therefore, the rN category may give more accurate prognostic information on nodal involvement than the current pN category of TNM, thus having a great impact on the selection of patients who may benefit from the adjuvant treatment.

A study from Italy[11] showed that the number of metastatic lymph nodes is significantly related with rN, and that the more the number of metastatic lymph nodes is, the higher the rN will be, indicating that gastric cancer patients with a higher rN have a greater risk of death after surgery and a shorter survival time. In this study, when the rN was increased 10%, the calculated 5-year survival rate was decreased by 8.14%, whereas when the rN was decreased 10%, the calculated 5-year survival rate was increased by 8.14%, suggesting that the long-term survival can be improved by reducing rN. Moreover, Person’s correlation test showed that rN was negatively correlated with the negative LN count (P < 0.001), indicating that removal of more negative lymph nodes can reduce rN.

Some researches have shown that metastatic lymph node ratio (rN) is an excellent predictor for the survival rate of patients with colon cancer, pancreatic cancer, breast cancer and other carcinomas. Some related studies on gastric cancer have also found the potential effect of rN on prognostic evaluation, but no consensus on stratification cutoffs, especially lack of data on gastric cancer after curative distal gastrectomy.

The authors investigated the validity of metastatic LN ratio as a prognostic factor by retrospectively reviewing 634 gastric cancer patients who underwent curative resection (R0) with distal gastrectomy in 1995-2004. The relation between rN and survival was discovered.

This is an interesting study about the prognostic value of metastatic lymph node ratio (MLR) for 634 gastric cancer patients who underwent curative subtotal gastrectomies at a single institute. The study was well designed.