Hypereosinophilic syndrome (HES) is a rare disorder characterized by the overproduction of eosinophils in the bone marrow with persistent peripheral eosinophilia, tissue infiltration, and end-organ damage by eosinophil infiltration and the secretion of mediators[1]. The diagnosis of HES is based on marked eosinophilia exceeding 1500/mm3, a chronic course longer than 6 consecutive months, exclusion of parasitic infestations, allergic diseases and other etiologies for eosinophilia, and signs and symptoms of eosinophil-mediated tissue injury[1,2]. While HES can involve multiple organ systems, including bone marrow, heart, lung, liver, lymph node, muscle, and nerve tissue[1], gastrointestinal tract involvement is rare[1-3]. To date, only a handful of cases of HES presenting with gastritis or enteritis have been reported worldwide[4-9], and HES presenting with intractable gastric ulcers has not been reported. We report our case of a 71-year-old male patient with HES presenting with multiple intractable gastric ulcers with a review of the literature.

A 71-year-old man presented with epigastric pain. He underwent cholecystectomy 20 years previously due to acute cholecystitis with gallstones, and has intermittently taken nonsteroidal anti-inflammatory drugs (NSAID) and corticosteroids on account of degenerative arthritis for 15 years. Other symptoms, as well as his past medical and family history, were otherwise unremarkable. The initial physical examination showed a flat, soft abdomen with normoactive bowel sounds with no sign of direct or rebound tenderness and no hepatosplenomegaly. Thoracic auscultation revealed no remarkable results. Routine complete blood count reported a leukocyte count of 7790/mm3 with 5.3% eosinophils, hemoglobin level of 12.1 g/dL, and a platelet count of 19 8000/μL. There were no noteworthy findings on simple chest and abdominal radiography. No specific cardiac abnormalities on standard 12-lead electrocardiogram (ECG) or Doppler echocardiogram were detected. ECG revealed normal sinus rhythm and the echocardiogram showed normal global left ventricular systolic function (estimated ejection fraction 70%).

Esophagogastroduodenoscopy (EGD) findings revealed several active gastric ulcers in the antrum of the stomach (Figure 1A). Biopsy findings showed an ulcer with Helicobacter pylori (H pylori). He underwent H pylori eradication therapy (lansoprazole 30 mg twice a day, clarithromycin 500 mg twice a day and amoxicillin 1000 mg twice a day for 7 d) followed by a proton pump inhibitor (PPI) and gastroprotective agent therapy for 2 mo. Follow-up EGD and biopsy performed after 2 mo showed that H pylori was eradicated, whereas multiple gastric ulcers were still noticeable with only slight improvement (Figure 1B). Follow-up endoscopy at 4, 6, and 10 mo showed persistent multiple gastric ulcers in the antrum despite continuous PPI treatment. Therefore, he was readmitted after 14 mo for etiological evaluation of the intractable gastric ulcers. 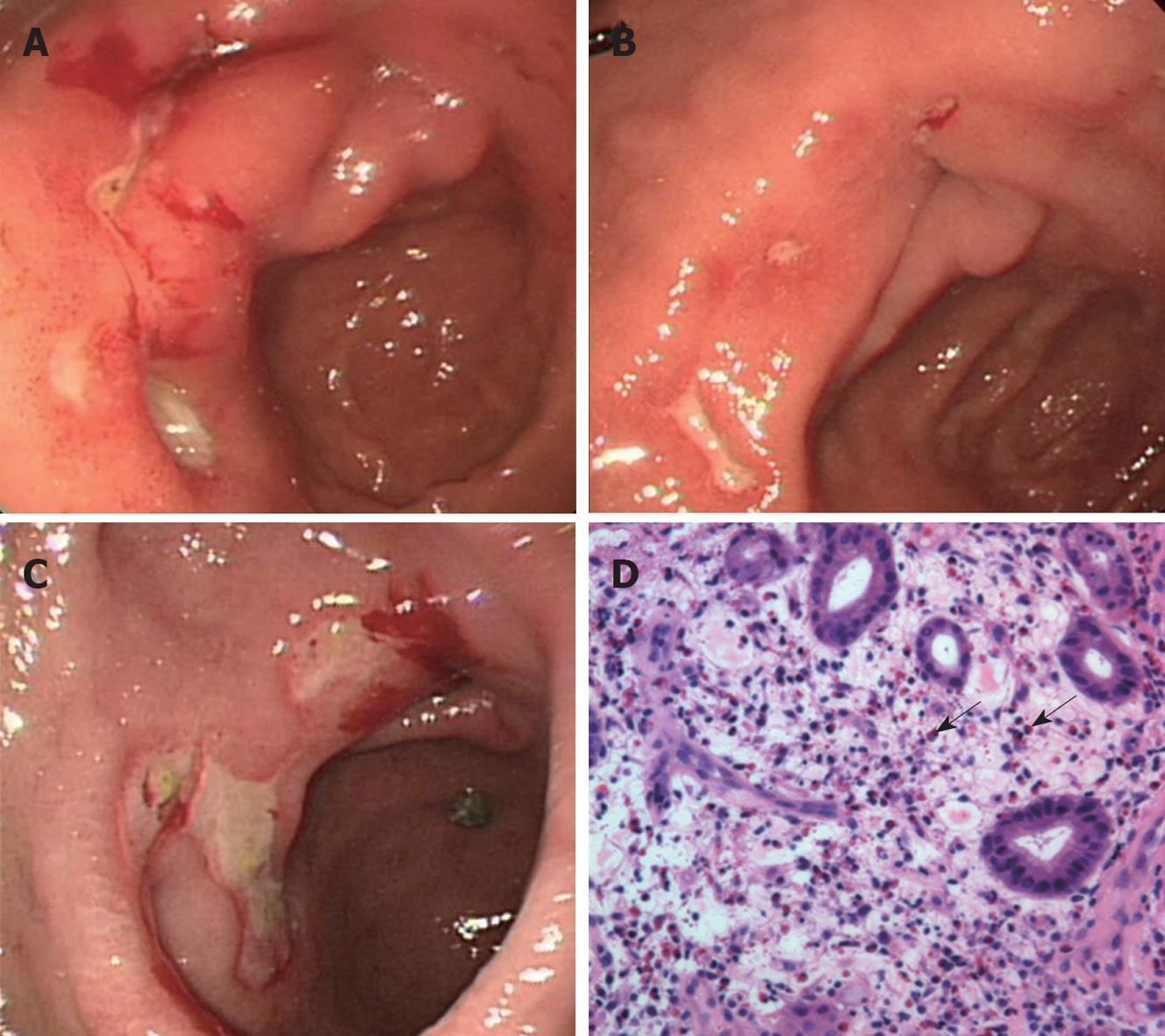 In the EGD findings, multiple gastric ulcers were still found in the antrum of stomach (Figure 1C). The endoscopic biopsy specimen revealed prominent eosinophilic infiltrations of > 20 cells/HPF (Figure 1D). A retrospective review of the previous endoscopic biopsy specimens disclosed eosinophilic infiltration at the antrum which was overlooked at the initial evaluation.

The chest computed tomography (CT) scan showed very tiny nodules in both lungs and approximately 15-mm-sized nodular lesions in the posterior basal segment of the right lower lobe (Figure 2A and B). In the abdominal-pelvic CT scan, multiple, small, and ill-defined low density lesions were found in both lobes of the liver (Figure 3A and B). The liver biopsy showed eosinophilic infiltration in the portal tract and sinusoid (Figure 3C and D).

Figure 2 A chest CT scan showed very tiny nodules in both lungs (A) and approximately 15-mm-sized nodular lesions in the posterior basal segment of right lower lobe (B) (arrows). 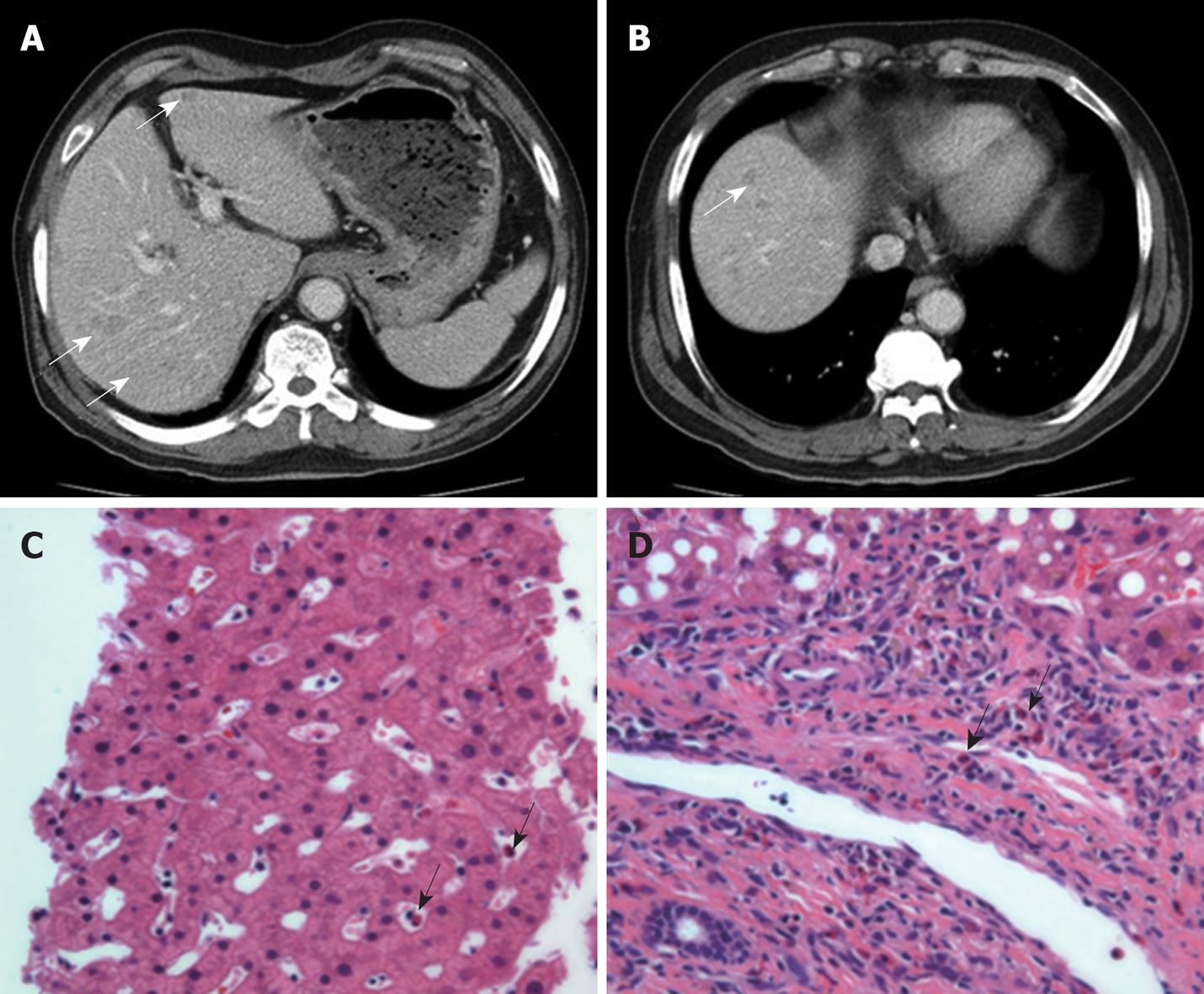 Figure 3 Abdominal-pelvic CT scan and liver biopsy findings. A, B: There were multiple, small, ill-defined low densities found in the liver (white arrows); C, D: Microscopically, eosinophilic infiltration was noted in the sinusoid and the portal tract (black arrows) (HE stain, × 400).

The peripheral blood smear report showed that there were no immature or dysplastic cells or morphologically abnormal eosinophils. The bone marrow aspiration smear showed an M:E ratio of 3.8:1 and an elevated eosinophil count of 22.2% (Figure 4A). Bone marrow biopsy findings also indicated eosinophilic hyperplasia, with increased cellularity of 70% and normal distribution of erythroid, myeloid, and megakaryocytic cell lineages (Figure 4B). The Fip1-like 1-platelet-derived growth factor receptor A fusion gene (FIP1L1-PDGFRA) rearrangement was not detected and there were no cytogenetic abnormalities. 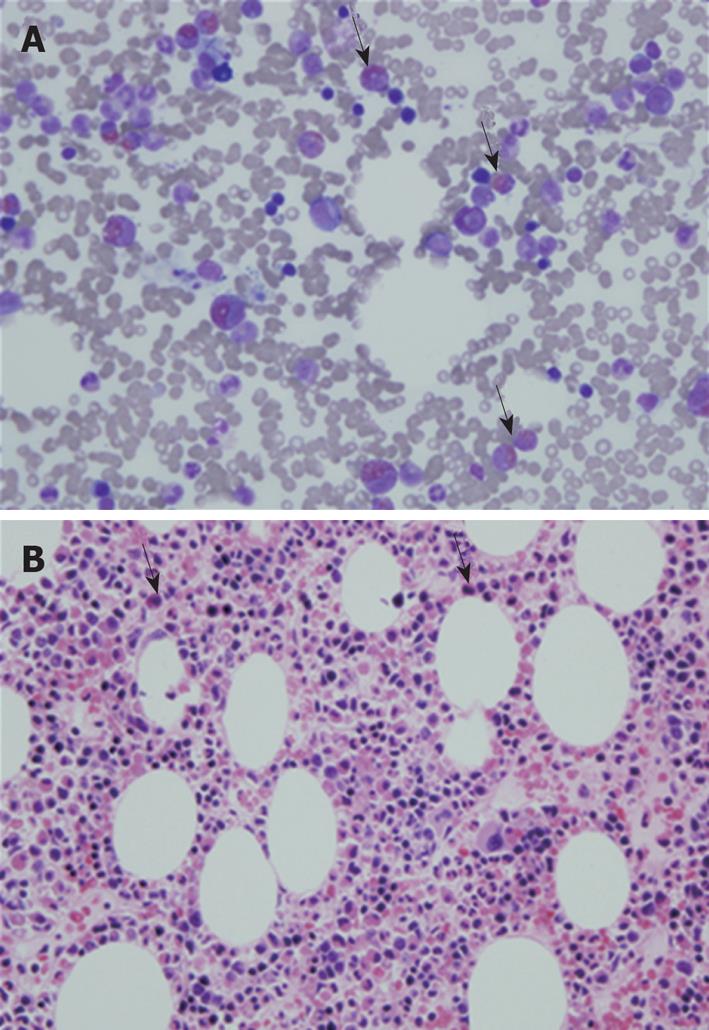 Figure 4 Bone marrow examination. A: In the bone marrow aspiration smear, the M:E ratio was 3.8:1 and the eosinophil count was elevated to 22.2% (arrows); B: Bone marrow biopsy findings showed eosinophilic hyperplasia (arrows) with increased cellularity of 70% and erythroid, myeloid, and megakaryocytic cell lineages with a normal distribution pattern (HE stain, × 400).

This patient was finally diagnosed with HES involving the stomach, liver, lung, and bone marrow. He was treated with oral prednisolone 60 mg/d and PPI. After two weeks of therapy, clinical manifestations rapidly improved and peripheral blood eosinophilia had subsided.

HES is a rare disease characterized by unexplained persistent eosinophilia associated with multiple organ dysfunction[1,2]. In 1968, Hardy and Anderson[10] reported three patients with hypereosinophilia, hepatosplenomegaly, and cardiopulmonary symptoms, and first suggested that they had a nonmalignant disorder that belonged within the spectrum of disease termed hypereosinophilic syndrome. In HES, the degree of end-organ damage is heterogeneous, and there is often no correlation between the level or duration of eosinophilia and the severity of organ damage[1,3]. Also, the clinical manifestations are variable from one patient to another, depending on target-organ infiltration by eosinophils[11]. Virtually any tissue or organ can be affected, but cardiac involvement is the major cause of the morbidity and mortality associated with HES[1,9,12]. We did not find cardiac involvement in our patient.

HES may be confused with EG. The diagnosis of EG is based on the following three criteria: (1) the presence of gastrointestinal symptoms, (2) biopsies showing eosinophilic infiltration of one or more areas of the GI tract, or characteristic radiologic findings with peripheral eosinophilia, and (3) no evidence of parasitic or extraintestinal disease[16]. Because EG is also of unknown etiology, the distinction from HES must be made on clinical and pathologic bases[17,18]. Eosinophilic gastroenteritis characteristically does not extend beyond the target organ[1,18]. Hence, EG lacks the multiplicity of organ involvement often found in HES and does not have the predilection to develop secondary eosinophil-mediated cardiac damage[1,18]. Thus, EG can usually be distinguished from HES, although individual patients may on occasion present with overlapping features that confound classification[1,18]. In our patient, multiple organ involvement was demonstrated, and there was no other possible cause of severe eosinophilia.

In patients with eosinophilia who lack evidence of organ involvement, specific therapy is not needed[1]. Such patients can have prolonged courses without the need for therapeutic intervention[1]. However, patients with vital organ involvement require treatment[1]. The goals in the management of HES are as follows: (1) reduction of peripheral blood and tissue levels of eosinophils; (2) prevention of end-organ damage; and (3) prevention of thromboembolic events[1-3]. Corticosteroids have been used for decades in the treatment of HES and, with the exception of PDGFRA-associated HES, remain the first-line treatment for most patients[17]. Typically high-dose prednisone (1 mg/kg per day or 60 mg/d in adults) can be initiated[1,3]. A good response to corticosteroid therapy is associated with a better prognosis[1]. If patients are refractory or intolerant to corticosteroids, alternative therapies must be considered. Cytotoxic agents, including hydroxyurea, can be considered as second-line therapy[1,3]. Immunomodulatory agents including IFN-α, cyclosporine, and alemtuzumab can also be used[17]. In patients with FIP1L1-PDGFRA-positive HES, imatinib mesylate (Gleevec®), which selectively inhibits a series of protein tyrosine kinases, is considered first-line therapy[17].

In conclusion, we report a case of HES presenting with intractable gastric ulcers. The final diagnosis in this patient was HES involving the stomach, liver, lung, and bone marrow. Clinicians should bear in mind that gastric ulcers can develop in association with infiltrative disorders including HES. When gastric ulcers do not improve despite H pylori eradication and prolonged PPI therapy, an infiltrative gastric disorder, such as HES, should be considered.