We report a case of Cronkhite-Canada syndrome (CCS) associated with myelodysplastic syndrome (MDS). A 54-year-old woman, diagnosed as MDS the prior year after evaluation of anemia, visited our hospital with the chief complaint of epigastric discomfort. She also had dysgeusia, alopecia, atrophic nail change, and pigmentation of the palm, all of which began several months ago. Blood tests revealed severe hypoalbuminemia. Colonoscopy (CS) showed numerous, dense, red polyps throughout the colon and rectum. Biopsy specimens showed stromal edema, infiltration of lymphocytes, and cystic dilatation of the crypt. Her clinical manifestations and histology were consistent with CCS. We prescribed corticosteroids, which dramatically improved her physical findings, laboratory data, and endoscopic findings. This is the first report of CCS in a patient with MDS.

Cronkhite-Canada syndrome (CCS), first described by Cronkhite and Canada in 1955[1], is a rare, acquired, nonfamilial syndrome with diffuse gastrointestinal (GI) polyposis, atrophic nail change, alopecia, cutaneous hyperpigmentation, diarrhea, abdominal pain, and other GI complications such as protein-losing enteropathy and malnutrition. Goto[2] and Takeuchi et al[3] reviewed 278 cases of CCS patients up to 1993 and found that 212 (76.3%) of them were Japanese. Except for cases of anemia caused by malnutrition, CCS with hematologic disorder has not been reported. This report is the first to describe a case of CCS in a patient with myelodysplastic syndrome (MDS).

A 54-year-old woman visited our hospital with the chief complaint of epigastric discomfort for a month. She was diagnosed as MDS the prior year after evaluation of anemia following a routine check-up. She also suffered from dysgeusia, alopecia, and pigmentation of the palms several months ago. She and her family had no history of GI disease. Physical examination revealed a partial loss of capillus and supercilia, with blackish brown pigmentation in both palms (Figure 1).

Figure 1 Physical findings in our case at her first visit. A: Partial loss of the capillus and supercilia; B: Blackish brown pigmentation in both palms (black arrow); C: Atrophic nail change.

Partial loss of body hair including capillus and supercilia (Figure 1A) with blackish brown pigmentation was found in both palms (Figure 1B). Atrophic nail change was observed later (Figure 1C). Laboratory test showed that her white blood cell (WBC) count was 6400/μL (3000-6000), red blood cell (RBC) count was 349 × 104/μL (380-500 × 104), platelet count was 9.7 × 104 /μL (12-38 × 104), C-reactive protein (CRP) was negative and erythrocyte sedimentation rate (ESR) was 40 mm/1 h, total protein was 5.7 g/dL (6.5-8.0), and serum albumin was 3.2 g/dL (4.0-5.0). Esophagogastroduodenoscopy (EGD), performed for further evaluation of the GI tract, revealed red and edematous granular polyps with giant folds, the so-called red-carpet-like polyposis of the stomach (Figure 2). A biopsy specimen displayed proliferation of connective tissue, edema, and infiltration of lymphocytes in the lamina propria. Since these findings could not confirm the diagnosis, we prescribed famotidine (20 mg per day) for nonspecific gastritis. Watery diarrhea gradually worsened, occurring up to 7 times per day at 2 wk after her first visit. Then, alopecia also worsened and atrophic nail change was observed. 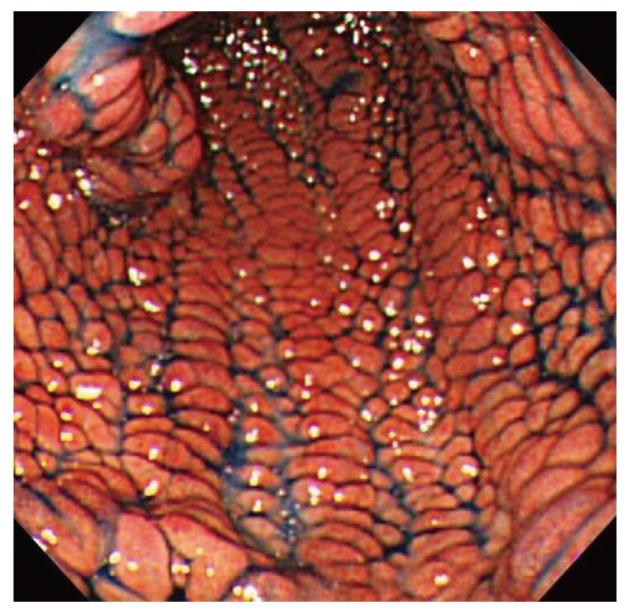 Figure 2 Esophagogastroduodenoscopy. Red and edematous granular polyps with giant folds, the so-called red-carpet-like polyposis of the stomach before treatment.

Laboratory test displayed not only elevated CRP and ESR, but also hypoalbuminemia (Alb 3.2 g/dL). We suspected protein-losing enteropathy and performed colonoscopy (CS) for differential diagnosis, which showed numerous, dense, red polyps throughout the colon and rectum (Figure 3A). Biopsy specimens from the colon displayed cystic dilation of crypts and edematous stroma with inflammatory cell infiltration (Figure 3B). These physical and endoscopic findings were consistent with CCS, but CS findings did not exclude ulcerative colitis. We added salazosulfapyridine (3 g per day) and probiotics for diagnostic therapy. Diarrhea and alopecia were gradually relieved, but hypoalbuminemia increased to 1.8 g/dL. Three months after salazosulfapyridine treatment, we started corticosteroid therapy with intravenous prednisolone (40 mg per day) and then exchanged salazosulfapyridine to mesalazine (1500 mg per day). We tapered the dosage of prednisolone at two-week intervals in consideration of the clinical and laboratory changes in our patient. Diarrhea gradually became solid and the serum albumin level increased steadily to 2.5 g/dL one month later. At three months after treatment, we tapered prednisolone to 2.5 mg/d. Her clinical manifestations were dramatically relieved (Figure 4). The CS findings were relieved and no neoplastic change was observed (Figure 5). The clinical course of this patient is depicted in Figure 6. 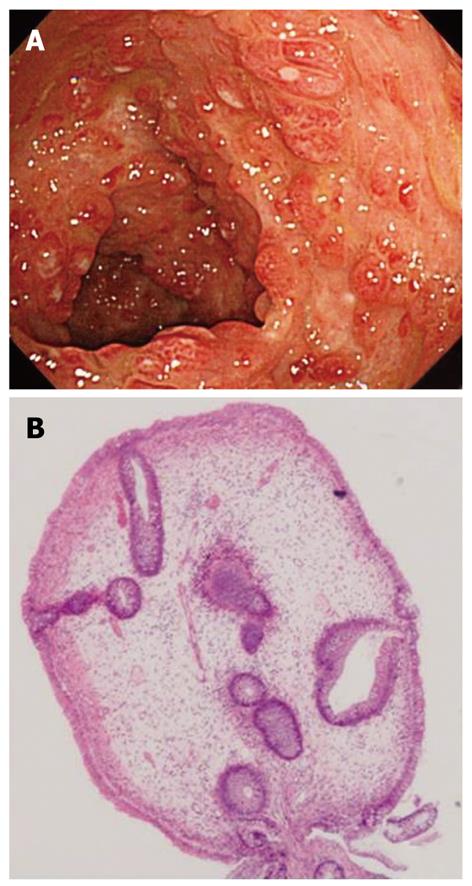 Figure 3 Colonoscopy (CS) findings. A: Numerous, dense, red polyps throughout the colon and rectum; B: Biopsy specimen from colon displaying cystic dilation of crypts and edematous stroma with inflammatory cell infiltration before treatment (HE, × 100).

Figure 4 Clinical manifestations of the patient after treatment. 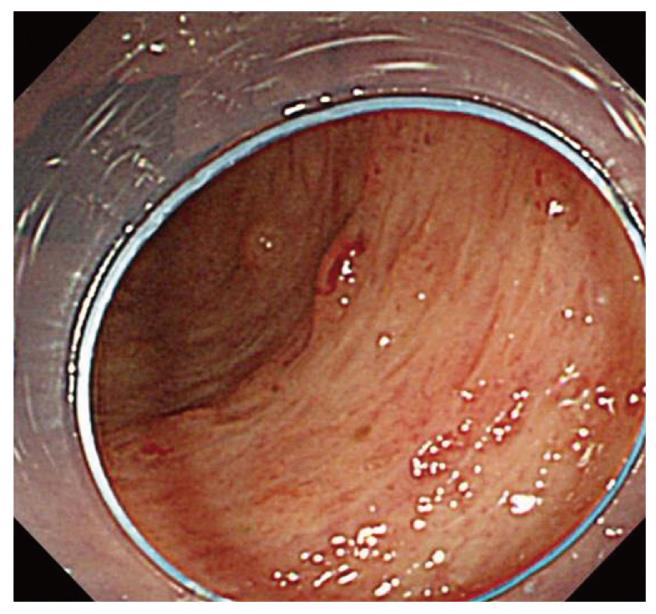 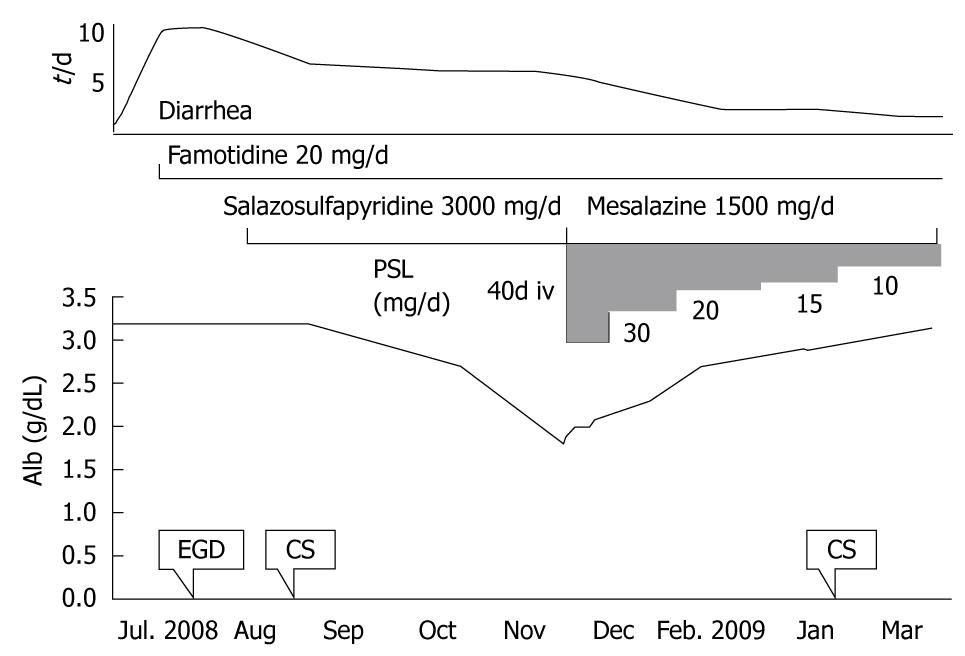 CCS, first described by Cronkhite and Canada in 1955[1], is a rare, acquired, nonfamilial syndrome with diffuse GI polyposis, atrophic nail change, alopecia, and cutaneous hyperpigmentation. Its etiology is apparently associated with the ectoderm abnormality[2,3].

The etiology of CCS remains unknown. Infection, mental stress, concomitant neoplasm, and immune abnormalities are regarded as triggering factors for CCS[3,10]. In addition, MDS has a high incidence (10%-20%) accompanying autoimmune diseases, such as systemic lupus erythematosus and aortitis[11-13]. It is particularly interesting that GI autoimmune diseases, such as inflammatory bowel disease (IBD) and Behcet’s disease, are also reported in patients with MDS. The etiology is considered to be an imbalance of various cytokines attributable to the abnormal level of multipotent stem cells. Reportedly, up-regulation of cytokines, such as TGF-β, TGF-β receptor, IL-6, and IL-7 receptors mapped to chromosome 8, related to inflammation and cell proliferation, plays an important role in the pathogenesis of patients having Behcet’s disease with MDS and trisomy[14-16].

This case was consistent with CCS, considering its typical clinical manifestations and histology. We infer the possibility that cytokine abnormalities induced by earlier MDS may have caused CCS in this case. However, the karyotype was not trisomy 8, 46, XX, or i(7) (q10). Moreover, inflammatory cytokine levels (IFNγ, IL-6, IL-10, TNF-α) were within normal limits. These results suggest that the etiology of this case is not associated with cytokine imbalance, as reported for Behcet’s disease with MDS of trisomy 8.

In conclusion, we report a case of CCS in a patient with MDS. Although the association of CCS and MDS in this case remains uncertain, clarification of the CCS etiology is possible through accumulation of similar cases and results of further studies of the pathogenesis of MDS associated with autoimmune disease.