AIM: To investigate the characteristics of slow electrical waves and the presence of transient receptor potential melastatin-type 7 (TRPM7) in the human gastrointestinal (GI) tract.

CONCLUSION: These results suggest that the human GI tract generates slow waves and that TRPM7 channels expressed in the ICCs may be involved in the generation of the slow waves.

Smooth muscles in the gastrointestinal (GI) tract are spontaneously active with rhythmic generation of slow electrical waves[1]. The slow waves determine the frequency and amplitude of the phasic contractions of GI muscles[2]. Slow waves originate in specialized regions such as the border between the circular and longitudinal muscle layers in the stomach and small intestine and along the submucosal surface of the circular muscle layer in the colon[3]. Each pacemaker region is populated by interstitial cells of Cajal (ICCs), and many studies have demonstrated the pacemaker role of these cells[4-9]. ICCs generate spontaneous inward currents and slow wave-like depolarizations[10,11]. Slow waves propagate within the ICC networks, conduct into smooth muscle cells via gap junctions, and initiate phasic contractions by activating Ca2+ entry through L-type Ca2+ channels. The pacemaker currents of the murine small intestine are due mainly to periodic activation of non-selective cation channels (NSCCs)[12].

In Caenorhabditis elegans, the melastatin-type transient receptor potential (TRPM) channel, particularly TRPM7, was suggested as being involved in the defecation process[13]. Also recently, we suggested that TRPM7 was a good candidate for the NSCC in ICCs of the murine small intestine[14]. TRP channels were first cloned from Drosophila species and constitute a superfamily of proteins that encode a diverse group of Ca2+-permeable NSCCs[15]. The TRP family is divided into 7 subfamilies: classical TRPs (TRPC), which display the greatest similarity to Drosophila TRP; vanilloid TRPs (TRPVs); TRPMs; mucolipin TRPs; polycystin TRPs; NOMPC (no mechanoreceptor potential C) TRP; ankyrin 1 TRPs. TRPC channels mediate cation entry in response to phospholipase C activation, whereas TRPV proteins respond to physical and chemical stimuli, such as changes in temperature, pH, and mechanical stress. The TRPM family members differ significantly from other TRP channels in terms of domain structure, cation selectivity, and activation mechanisms[15].

The segments of human colon or small intestine used in this study were obtained from cancer patients of either sex ranging in age from 46 to 59 years as discarded surgical tissue during operations. The protocol was approved by the human subjects research committees at Seoul National University College of Medicine. A segment of colon or jejunum was opened along the mesenteric border, and the mucosal layers, the serosal layers and a part of the longitudinal layers were carefully peeled away under a dissecting microscope. A tissue segment (about 0.5 mm wide and 0.5 mm long) was pinned out on a silicone rubber plate with the serosal side uppermost, and the plate was fixed at the bottom of an organ bath. The preparation was continuously perfused with CO2/bicarbonate-buffered Tyrode solution at 36-37°C and equilibrated for 2 h before the experiment, at a constant flow rate of about 2 mL/min.

The ionic composition of the CO2/bicarbonate buffered-Tyrode solution was as follows (mmol/L): NaCl 116, KCl 5.4, CaCl2 1.5, MgCl2 1, NaHCO3 24, glucose 5. The solutions were aerated with O2 containing 5% CO2, and the pH of the solutions was maintained at 7.3-7.4. Drugs used were flufenamic acid, 2-aminoethoxydiphenyl borate (2-APB), lanthanum ion (La3+) and nifedipine (all from Sigma, USA). Drugs were dissolved in distilled water, and added to CO2/bicarbonate buffered-Tyrode solution to the desired concentrations, immediately prior to use. Addition of these chemicals to the Krebs solution did not alter the pH of the solution.

Whole-mount preparations from the colon or small intestine of human were used for immunohistochemistry. Experimental protocols approved by Seoul National University were followed. For whole-mount preparations, the mucosa was removed by sharp dissection, and the remaining muscle layer was stretched before fixation. Whole-mount preparations were fixed in cold acetone (4°C) for 5 min. After fixation, they were washed in phosphate-buffered saline (PBS; 0.01 mol/L; pH 7.4) and immersed in 0.3% Triton X-100 in PBS. After blocking with 1% bovine serum albumin (Sigma) in 0.01 mol/L PBS for 1 h at room temperature, they were incubated with a rat monoclonal antibody raised against c-kit (Ack2; eBioscience) at 0.5 μg/mL or goat polyclonal antibody against TRPM7 (Abcam, Cambridgeshire, UK) in PBS for 24 h (4°C). After a rinse in PBS at 4°C, they were labeled with the fluorescein isothiocyanate-coupled donkey anti-goat immunoglobulin G secondary antibody (1:100; Jackson Immunoresearch Laboratories, Baltimore, MD, USA) or Texas red-conjugated donkey anti-rat immunoglobulin G (1:100; Jackson Immunoresearch Laboratories) for 1 h at room temperature. Control tissues and sections were prepared by omitting either the primary or secondary antibodies from the incubation solutions.

All data are expressed as mean ± SE. The Student t-test for unpaired data was used to compare control and experimental groups. A P-value < 0.05 was considered statistically significant. 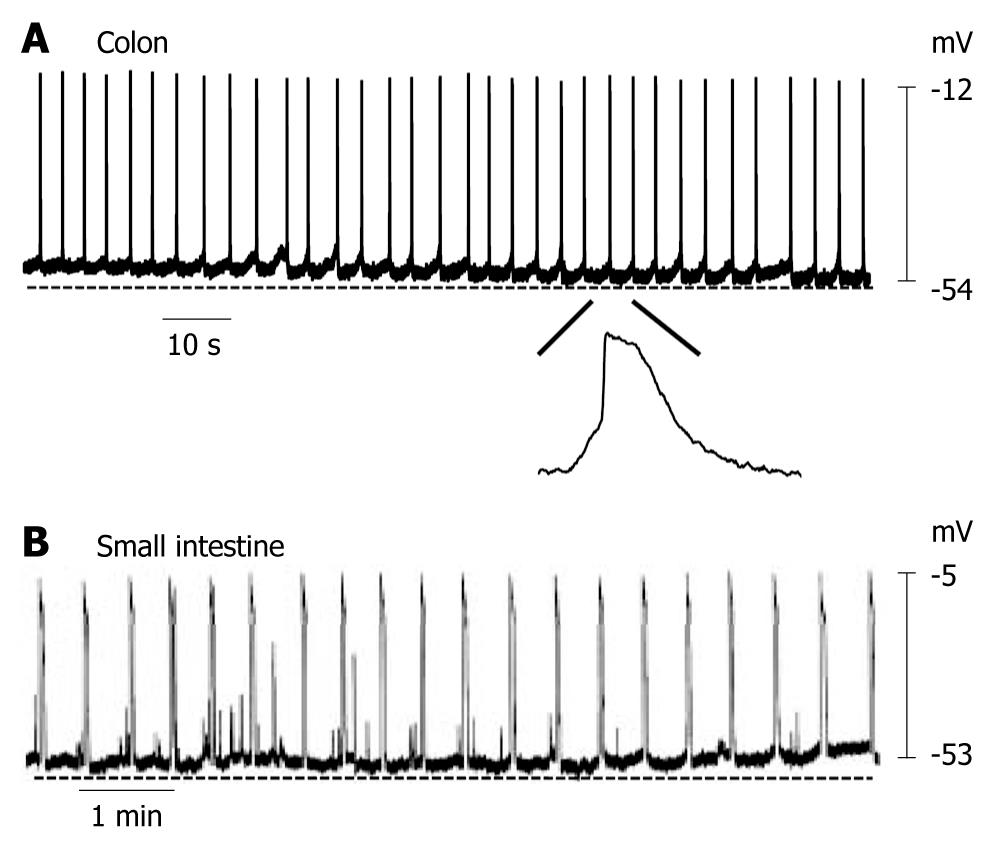 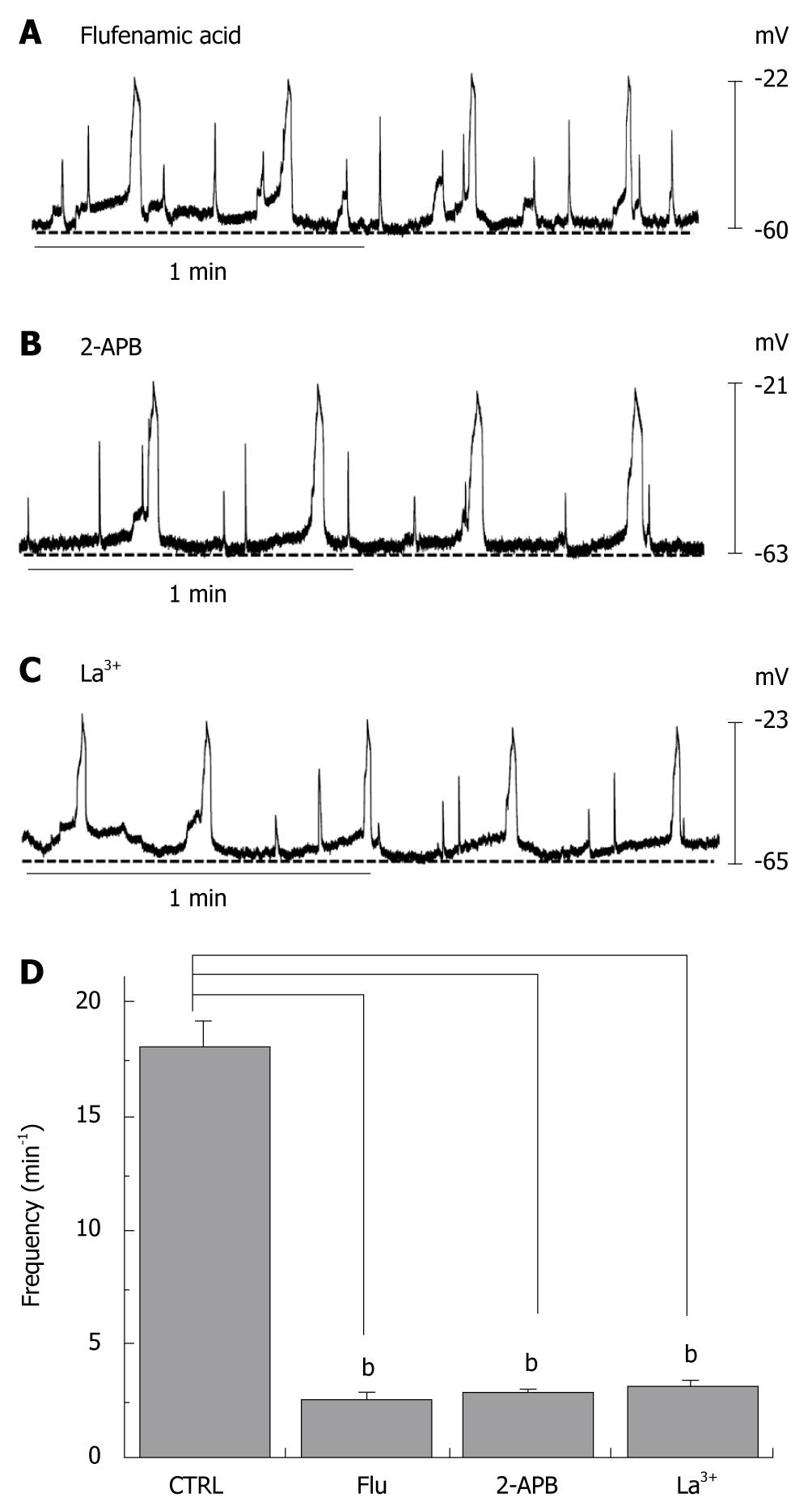 To test this possibility more directly, we examined the expression of TRPM7 in ICCs in human tissues. Expression of TRPM7 proteins was investigated by immunohistochemistry. Double staining with anti-c-kit (a marker of ICCs) and anti-TRPM7 antibodies showed TRPM7 immunoreactivity in c-kit-immunopositive ICCs in the human colon (Figure 3), and human small intestine (Figure 4). 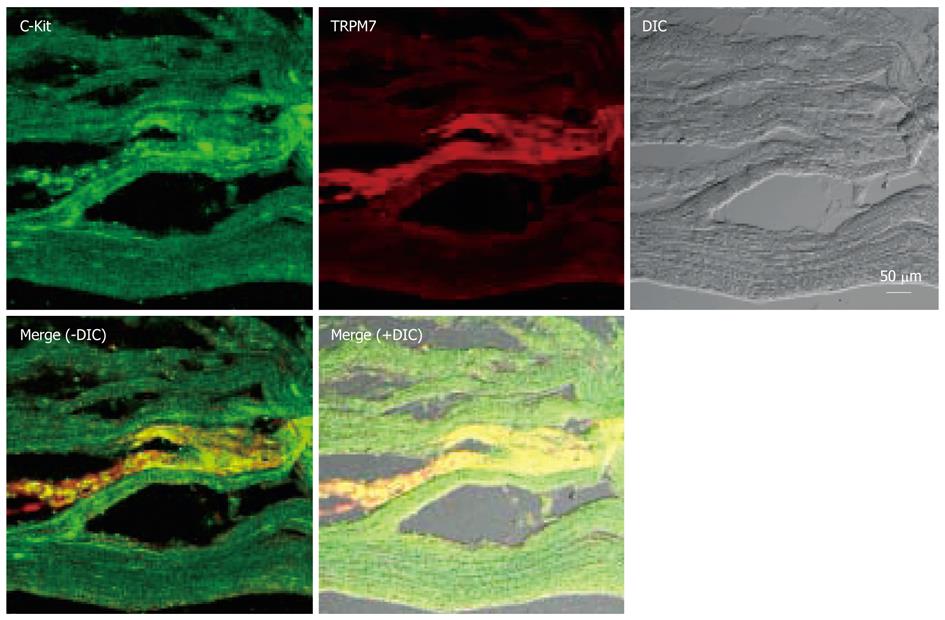 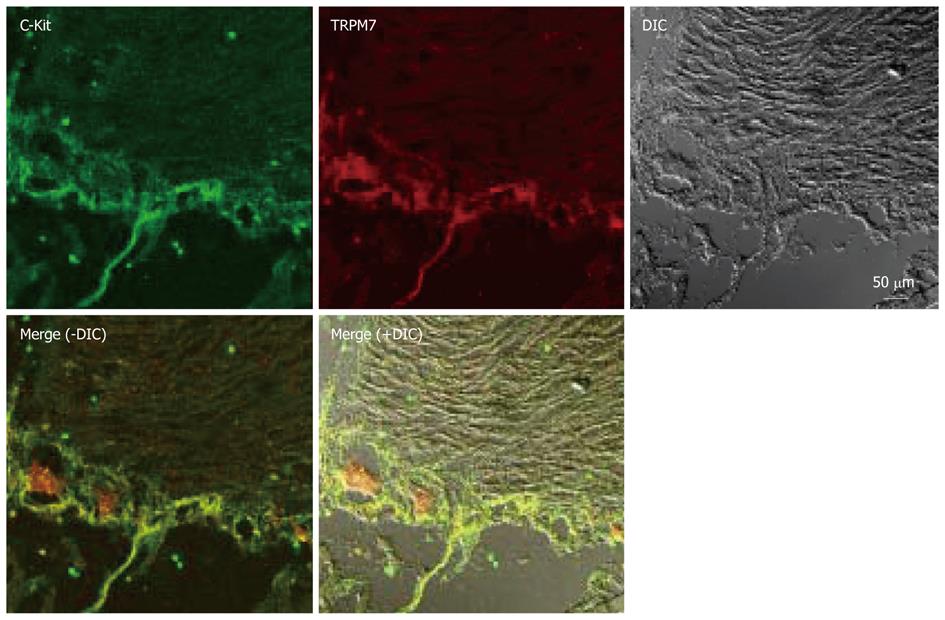 GI smooth muscles are spontaneously active, and generate rhythmic slow electrical waves[1]. The slow waves originate in the ICCs distributed in the GI tract[4-9]. ICCs express c-kit immunoreactivity and form gap junctional connections with ICCs and with smooth muscle cells[18-20]. Many types of ICC with different immunohistochemical and electrical properties, such as myenteric ICC (ICC-MY), intramuscular ICC, deep muscular plexus ICC and submucosal ICC, are distributed in the GI tract[21]. In animal models lacking ICC-MY, the slow waves in the small intestine are strongly attenuated, indicating that these cells are indeed essential for pacemaking activity in the GI tract[6,22].

Research into the distribution and function of ICCs was greatly stimulated by discovering that ICCs express c-kit, and signaling via kit protein is necessary for development and maintenance of the ICC phenotype[7,23]. ICCs are involved in physiological GI motility, therefore have clinical importance in many bowel disorders, including inflammatory bowel disease, chronic idiopathic intestinal pseudo-obstruction, intestinal obstruction with hypertrophy, achalasia, Hirschsprung disease, juvenile pyloric stenosis, juvenile intestinal obstruction, and anorectal malformation[21].

Discovering the molecules involved in the generation of pacemaker activity in ICCs may lead to dramatic new therapies for chronic GI diseases that result in lifelong suffering.

Strege et al[24] suggested that a mechanosensitive Na+ channel current is present in human intestinal ICC and appears to play a role in the control of intestinal motor function. Also in human jejunum, each ICC-MY generates spontaneous pacemaker activity that actively propagates through the ICC network, and the pacemaker activity was dependent on inositol-1,4,5-triphosphate receptor-operated stores and mitochondrial function[25]. Although some papers have identified the ion channels in ICCs[10,11,26,27], there is little known about the ionic basis of its pacemaker activity. Recently, we used electrophysiological, molecular biological, and immunohistochemical techniques to establish the close relationship between NSCCs in ICCs and a mammalian TRP homologue, TRPM7 and found that TRPM7 is required for murine intestinal pacemaking[14].

Little is known about the involvement of TRPM7 channels in ICCs in the human GI tract. In this study, we found that the human GI tract generated slow waves and various pharmacological properties of the slow waves were the same as those of TRPM7. Also, immunohistochemistry showed abundant and localized expression of TRPM7 protein in the human GI tract. TRPM7 has been suggested to have a central role in cellular Mg2+ homeostasis[28], in central nervous system ischemic injury[29], in skeletogenesis in zebrafish[30], in the defecation rhythm in C. elegans[13], in cholinergic vesicle fusion with the plasma membrane[31], in phosphoinositide-3-kinase signaling in lymphocytes[32], in cell death in gastric cancer[33], in osteoblast proliferation[34], and in breast cancer cell proliferation[35].

The physiological role of TRPM7 channels in ICCs in human GI tract requires more investigation. As a primary molecular candidate for the NSCC responsible for pacemaking activity in ICCs, TRPM7 may be a new target for pharmacological treatment of GI motility disorders.

Previously, transient receptor potential melastatin-type 7 (TRPM7) was found to be required for intestinal pacemaking activity in mice. However, in the human gastrointestinal (GI) tract, the characteristics of slow electrical waves and the presence of TRPM7 has not been investigated.

TRPM7 protein may be a new target for pharmacological treatment of GI motility disorders.

The authors well demonstrated the involvement of TRPM7 in ICCs and characterized the pharmacological properties of slow waves in the human GI tract. The finding will form the basis for future treatments of GI motility disorders and is a useful addition to the literature.