Figure 1 A polypoid lesion in the terminal ileum. 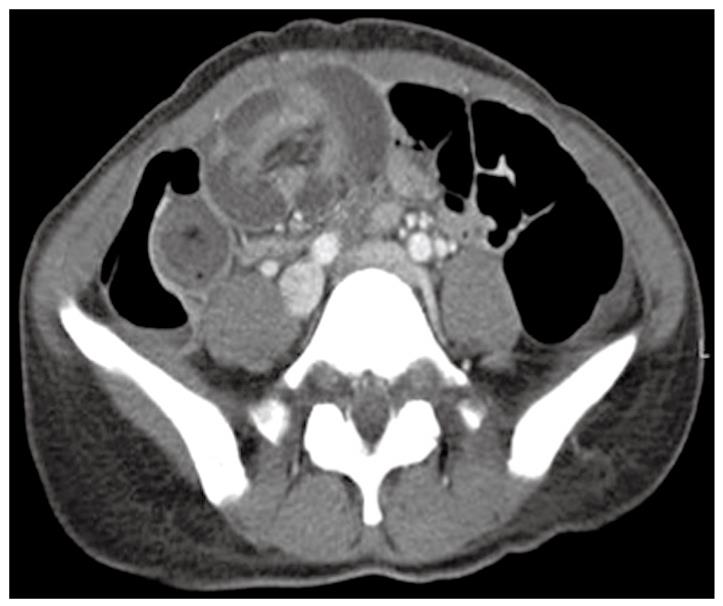 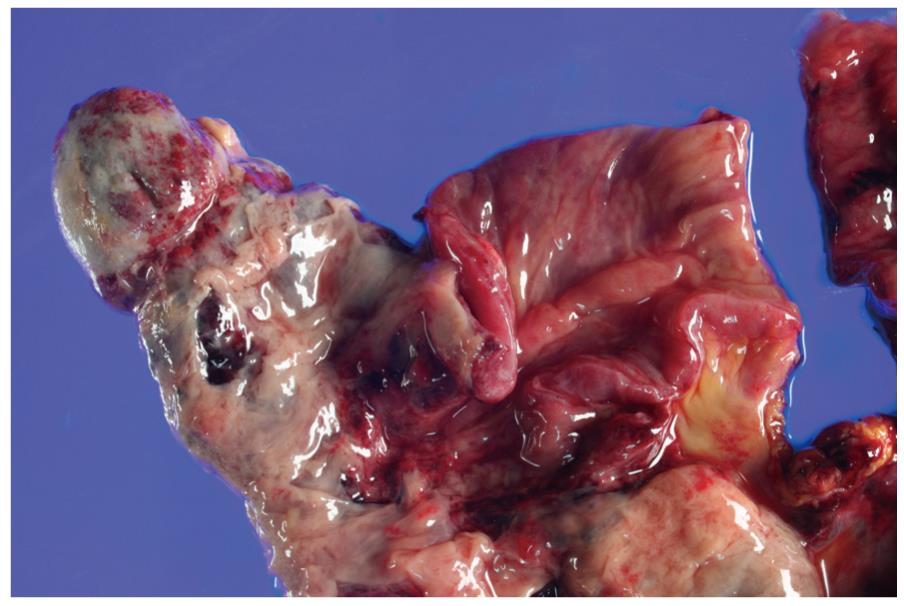 Figure 3 Macroscopically, a diverticular sac was noted along the antimesenteric border. The entire wall of both the diverticulum and intestine was affected by hemorrhagic infarction and the luminal surfaces were covered with a necrotic exudate. 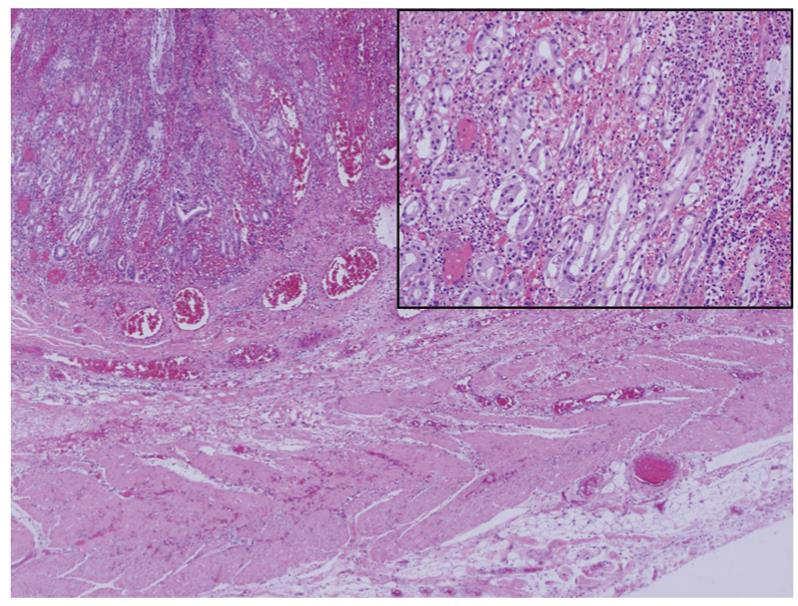 Figure 4 Microscopically, the diverticular sac was totally involved in transmural infarction. Its wall had a continuous proper muscle layer and heterotopic gastric mucosa (Inset). (HE, × 40; inset × 200).

Abdominal computed tomography (CT) is currently considered the most sensitive radiological method for confirming intussusception[1,2]. However, it is quite possible for colonoscopy to be selected as the initial diagnostic method when intussusception presents primarily as hematochezia. Colonoscopy may be useful for confirming the presence of intussusception, localizing the disease, and demonstrating the underlying organic lesion serving as the lead point. Intussusception might be misinterpreted as another lesion, such as a hematoma or polyp, on a colonoscopic examination, especially by an inexperienced endoscopist. Here, we report a colonoscopic feature of an intussuscepted Meckel’s diverticulum, presenting with hematochezia, which was initially misinterpreted as a hematoma on colonoscopic examination.

A 35-year-old woman presented to the emergency room with acute onset hematochezia that occurred over a weekend. She first noticed the hematochezia accompanied by transient, sharp, severe epigastric pain 6 h earlier. On physical examination, she was a lean young woman with stable vital signs. Her abdomen was soft with no tenderness or muscle guarding. Bowel sounds were hypoactive with a normal pitch. Digital rectal examination showed bright red stools on the glove. Laboratory tests revealed normal peripheral blood cell counts and blood chemistry, except for leukocytosis with a white blood count of 145 000/mm3. Because she was admitted at a weekend, endoscopy was performed by an inexperienced endoscopist who had trained at our endoscopic center for 2 years. Gastroscopy was negative. Colonoscopy revealed blood and mucus throughout the colon. At colonoscopy, a reddish, soft, fist-sized polypoid was found 30 cm into the terminal ileum (Figure 1). Forcing forceps against the lesion depressed the lesion. The endoscopist tried to remove the lesion using various endoscopic accessories, because it was misdiagnosed as a hematoma. The patient began to complain of intermittent, severe periumbilical pain following the colonoscopic examination. Subsequent CT showed a typical inhomogeneous target-shaped soft-tissue mass with a layering effect, suggestive of enteric intussusception (Figure 2). An exploratory laparotomy revealed enteric intussusception, with gangrene. Segmental resection of the small intestine was performed. The pathology revealed an intussuscepted Meckel’s diverticulum with transmural infarction along the antimesenteric border (Figure 3). Microscopic examination disclosed an ectopic gastric mucosa and a complete proper muscle layer in the diverticular wall (Figure 4). The patient had an uneventful postoperative course and was discharged on the ninth post-operative day.