AIM: To investigate the effects of class I phosphatidylinositol 3-kinase (PI3K) inhibitor LY294002 on the invasiveness and related mechanisms of implanted tumors of SGC7901 human gastric carcinoma cells in nude mice.

CONCLUSION: The class I PI3K inhibitor LY294002 could inhibit the invasiveness of gastric cancer cells by downregulating the expression of MMP-2, MMP-9, and VEGF, and reducing MVD. 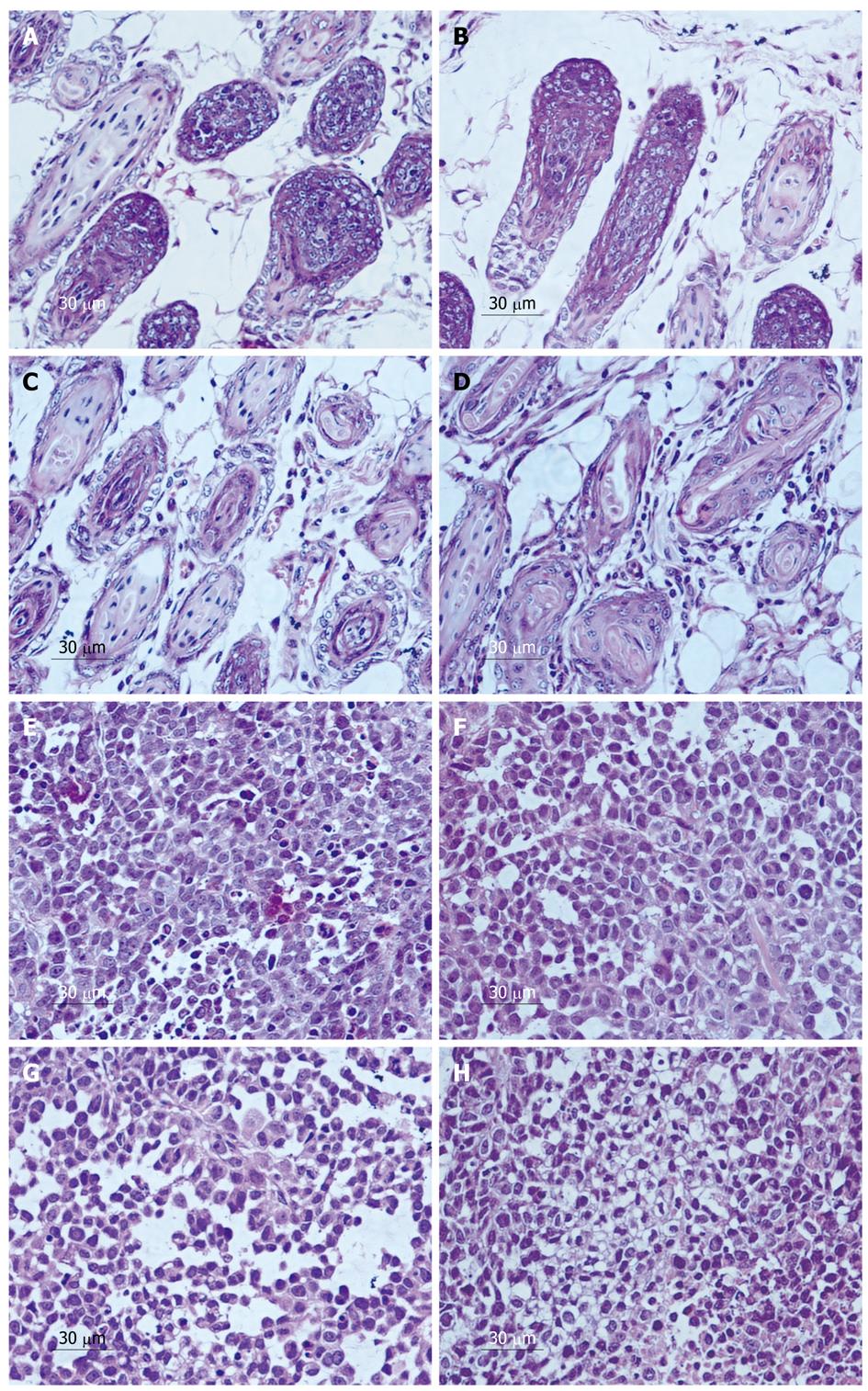 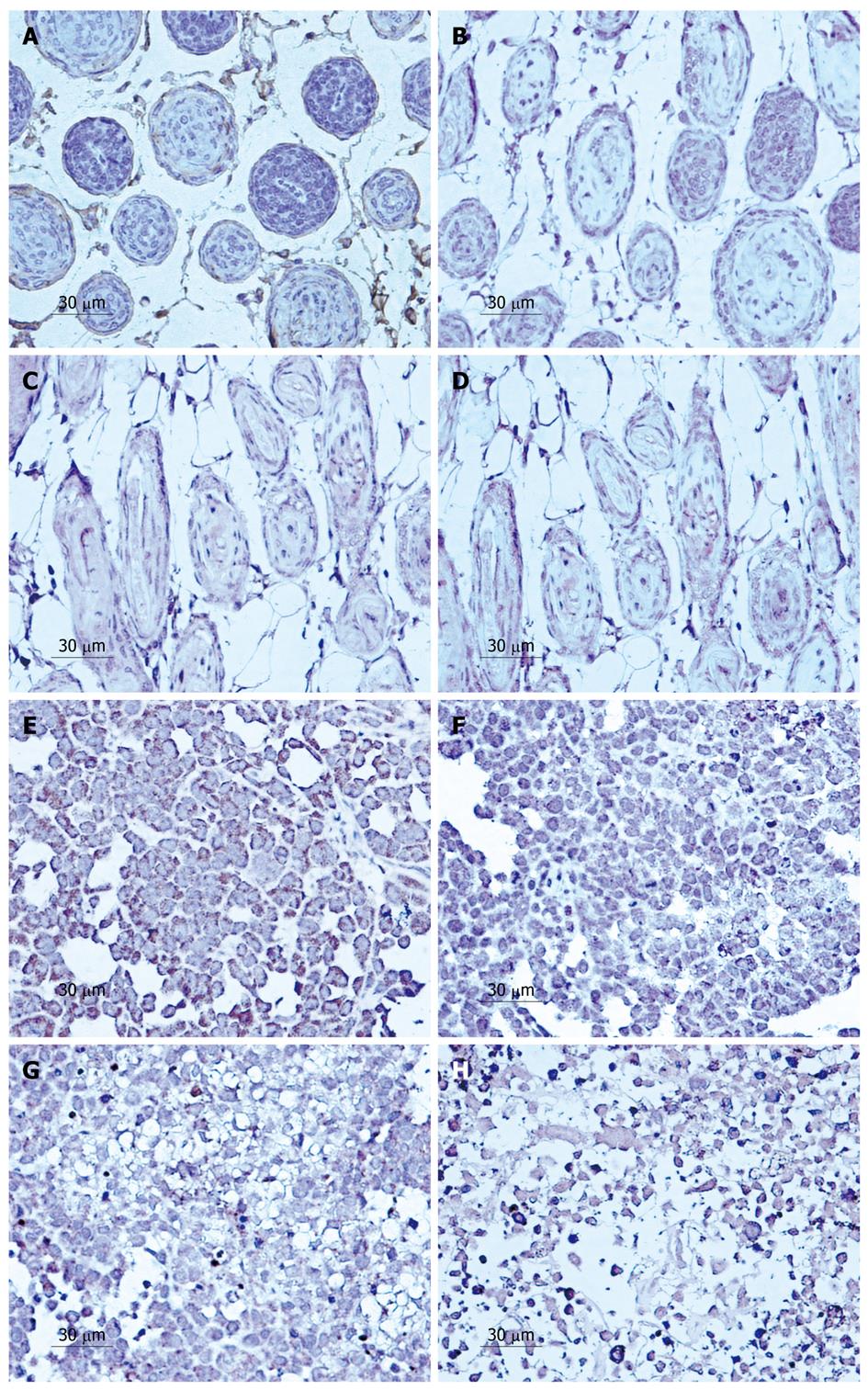 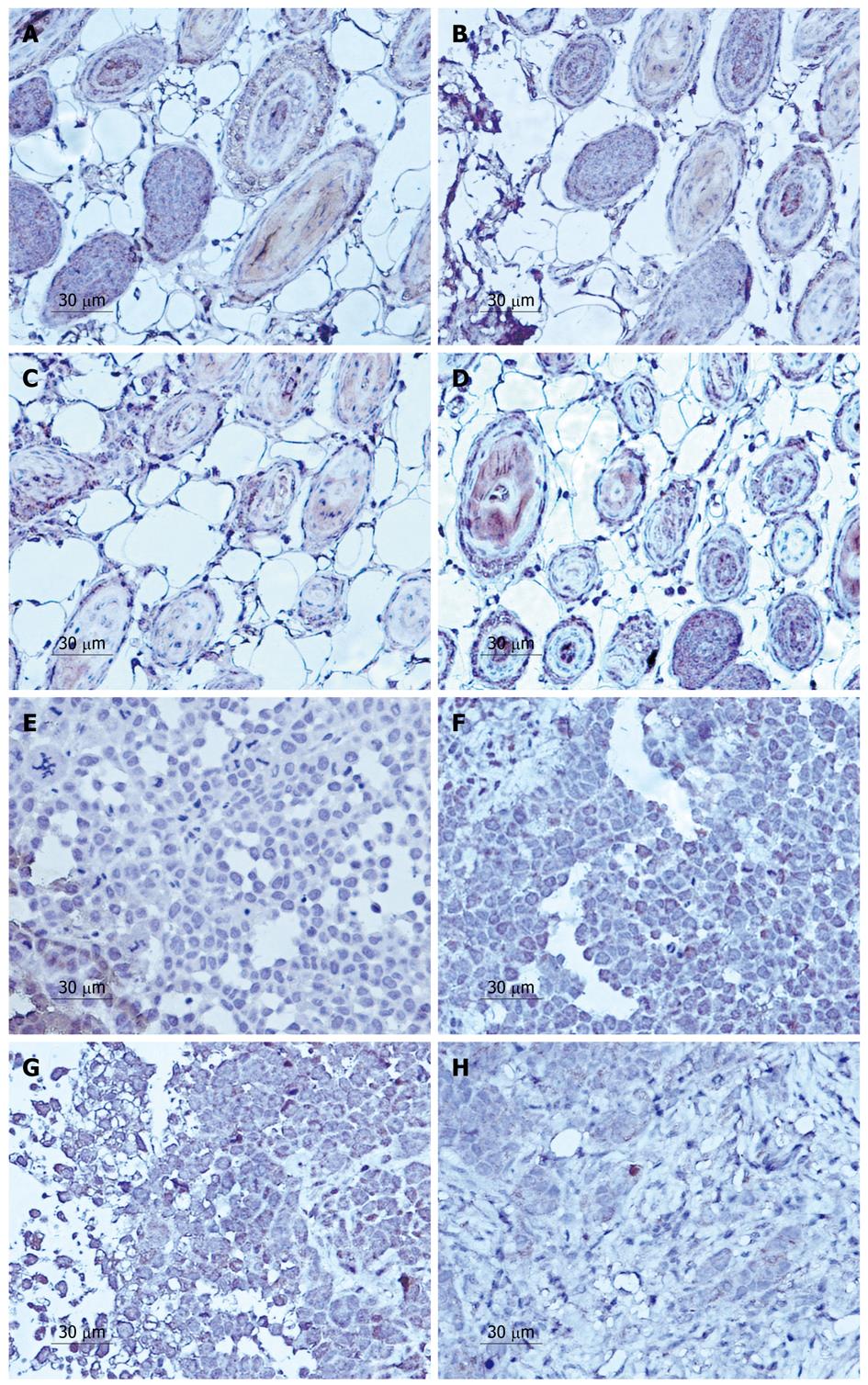 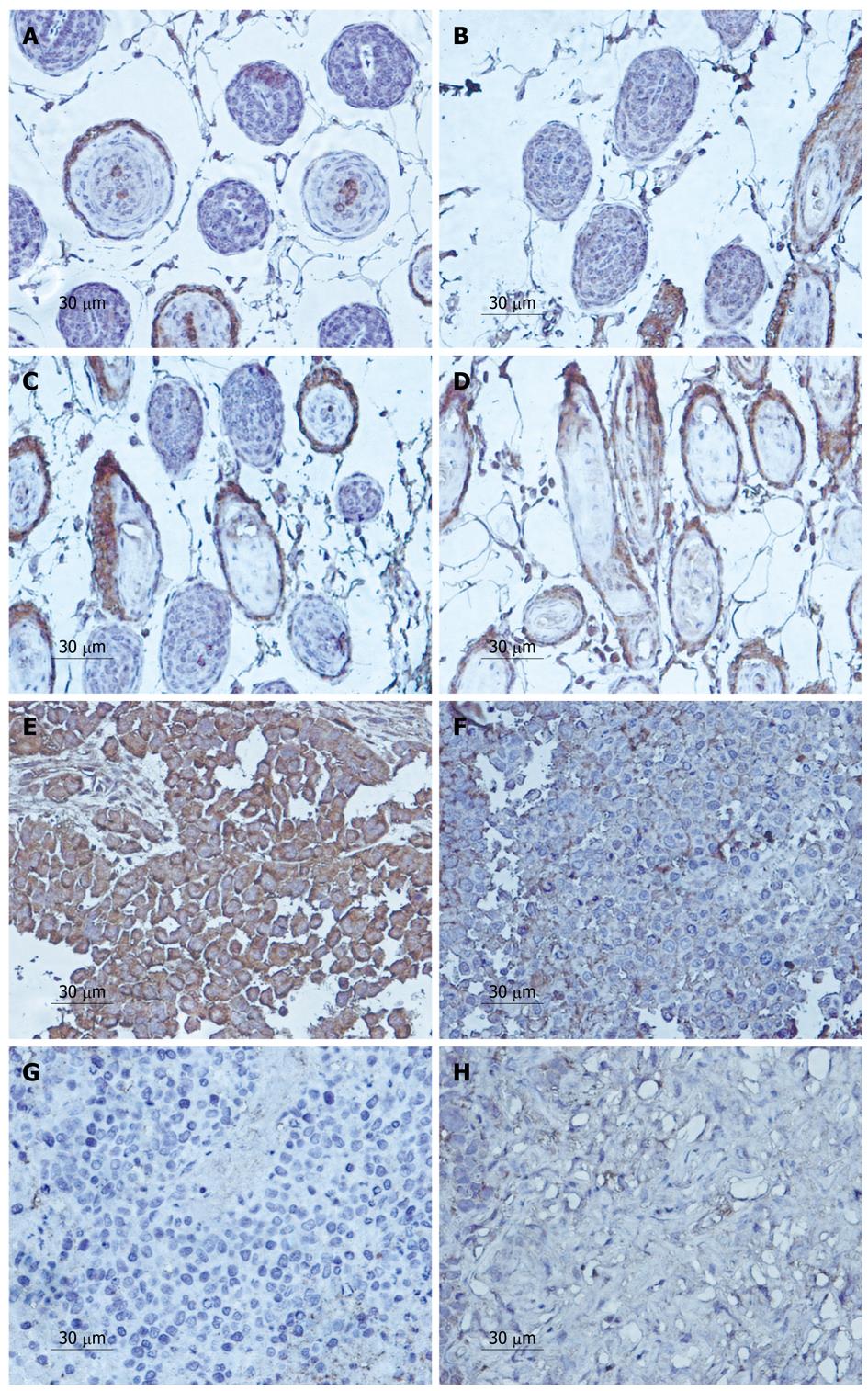 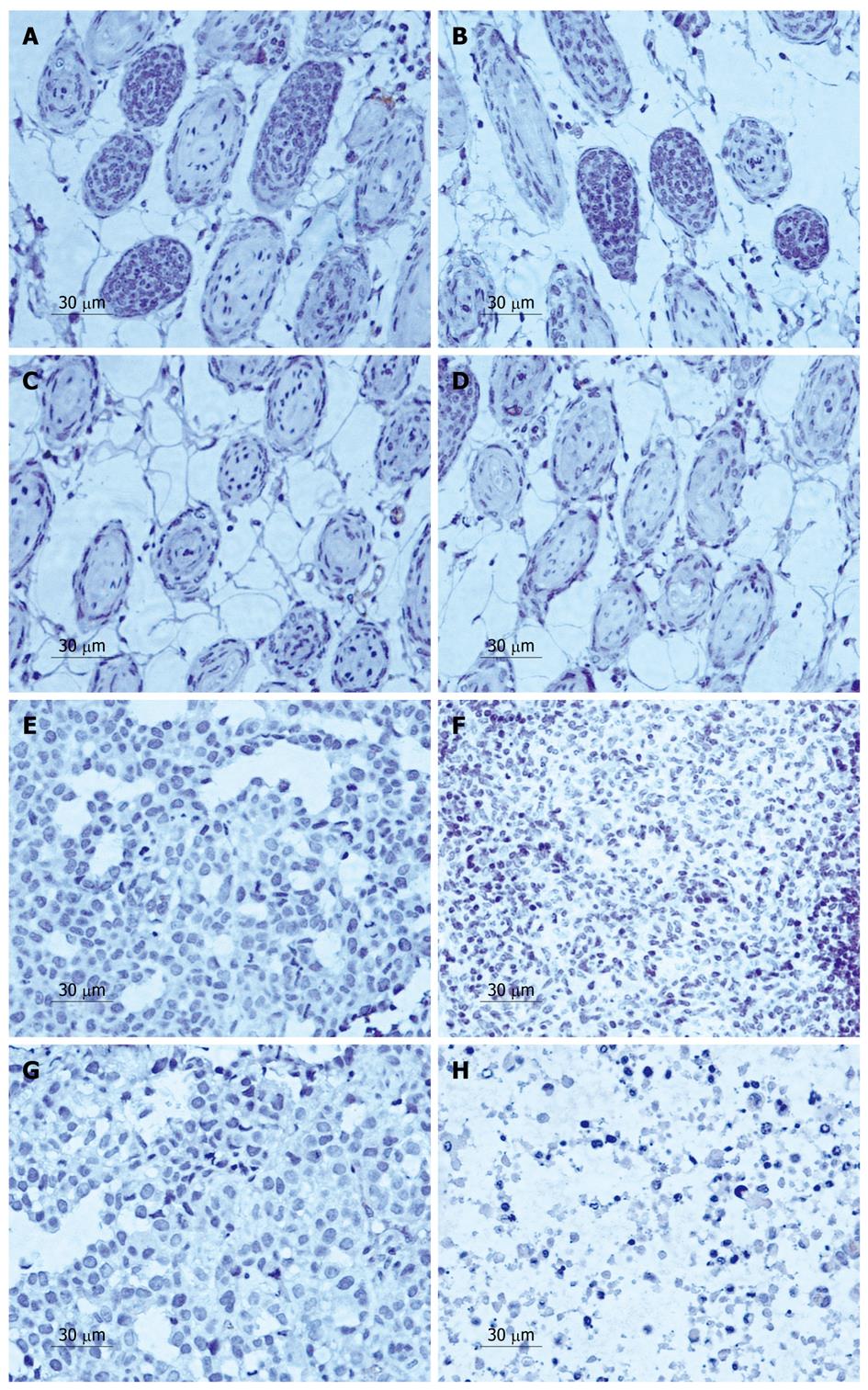 Invasiveness and metastasis are the leading biological characteristics of a malignant tumor, and have a close relation with factors such as movement of tumor cells, apoptosis and metastasis-associated genes. Matrix metalloproteinase (MMP)-2, MMP-9, intratumoral microvessel density (MVD) and vascular endothelial growth factor (VEGF) are important angiogenic factors, which have a higher expression in tumor tissues, may induce angiogenesis in the tumor and play an important role in metastases, invasion and prognosis of gastric cancer[3-7]. However, the underlying mechanism remains uncertain.

The phosphatidylinositol 3-kinase (PI3K) pathway plays a central role in the regulation of cell proliferation, growth, differentiation and survival[8,9]. Dysregulation of this pathway is frequently observed in a variety of tumors, including brain tumors and breast, ovarian and other carcinomas[10-12]. Therefore, inhibition of PI3K signaling is under investigation as a potentially useful approach for cancer treatment. However, the detailed mechanisms are poorly understood.

In the present study, we investigated whether the inhibition of class I PI3K by LY294002 restricted the growth and invasiveness of implanted tumors of SG7901 cells in nude mice. Through this research, we would suggest that the class I PI3K inhibitor LY294002 could play an important role in the inhibition of progression of gastric carcinoma, and may be of value in effective clinical antitumor therapy.

LY2940029 was purchased from Cell Signaling Technology (Beverly, MA, USA) and diluted in phosphate buffered saline (PBS) to create a stock solution that was stored according to the manufacturer’s instructions. The final concentration of the LY294002 solution used was 500 μmol/L. This concentration of LY294002 was selected on the basis of our experiments on implanted tumors of human SGC7901 cells in nude mice.

Hematoxylin and eosin (HE) and immunohistochemical staining

Tumor specimens were taken from areas next to the margin of the tumors as well as from more central areas. All the specimens were formalin-fixed, paraffin-embedded and pathologically diagnosed to be gastric carcinoma and evaluated using HE for conventional histological assessment. Histological characteristics were reviewed by two pathologists.

The tumor samples were cut into 4 μm thick slices and fixed in acetone. After washing in PBS, slices were incubated in 0.3% H2O2 solution at room temperature for 5 min. Slices were then incubated with anti-MMP-2 or anti-MMP-9 or anti-MVD or anti-VEGF monoclonal antibody at a 1:300 dilution at 4°C overnight. After washing in PBS, the second antibody, biotinylated anti-rat IgG, was added and the cells were incubated at room temperature for 1 h. After washing in PBS, avidin-biotin complex was added and then incubated at room temperature for 10 min. Diaminobenzidine was used as the chromogen. After 10 min, the brown color signifying the presence of antigen bound to antibodies was detected by light microscopy. Controls were prepared in the same manner as the experimental group, except for incubation with the primary antibody. The positive rate (PR) was calculated as follows: PR = (number of positive cells/total number of cells) × 100%.

All data are presented as mean% ± SD. Statistical analysis was carried out using ANOVA followed by Dunnett’s t-test, with P < 0.05 taken to indicate significance.

RESULTS
Effect of the LY294002 on tumor growth

SGC7901 cells (1 × 109) were injected subcutaneously into the armpit of nude mice. Within 1 wk, visible tumors had developed at the injection sites. To determine the therapeutic effectiveness of LY294002, intratumoral injection of LY294002 was started after the volume of the implanted tumor reached 20 mm3, and was repeated every 2 d for a total of three times. As shown in Table 1, LY294002 markedly suppressed tumor growth compared with PBS alone (P < 0.01). No gross adverse effects, i.e. the loss of body weight, were observed during the experimental periods. Moreover, LY294002 inhibited the proliferation of the implanted tumor of human SGC7901 cells in nude mice in a time-dependent fashion. The inhibition rate of the tumors was 11.31% ± 13% on day 5, 29.4% ± 1.47% on day 10 and reached 36.7% ± 2.12% on day 15.

LY294002 inhibited the expression of MMP-2 and MMP-9 proteins

LY294002 decreased the expression of MVD and VEGF

Positively stained particles of MVD-CD34 were mainly distributed in the plasmalemma of cells, though some were expressed in the cytoplasm (Figure 4). The mean MVD was much lower in the tumors treated with LY294002 than in the control group.

Currently only a few chemotherapeutic drugs are effective for the treatment of human gastric carcinoma[13] and there is an increasing interest in the use of drugs to prevent its occurrence or invasiveness. The lipid kinase PI3K is a proto-oncogene that generates 3’-phosphoinositides at the cell membrane. The best-characterized inhibitors of PI3K are LY294002 and wortmannin. LY294002 effectively inhibits the growth of many types of tumor cells in vitro and in vivo, via the inhibition of PI3K and downstream components of the pathway[14-17]. It is possible that LY294002 inhibits proliferation and induces apoptosis in SGC7901 cells through inhibiting class I PI3K. However, the downstream molecules involved in the apoptotic death of tumor cells following inhibition of PI3K/Akt by LY294002 remain to be identified[1,18].

Tumor metastasis involves a series of complex processes in which many gene products take part in regulating MMPs, which play an important role in breaking the extracellular matrix, are overexpressed in malignant tumors and are believed to contribute to tumor proliferation, invasion, and metastasis[19]. Among the MMPs, MMP-2 and MMP-9 are closely related to the metastasis of tumors, and have been specifically considered to be important factors in facilitating lymphatic invasion and metastases in gastric carcinoma[20-22].

In the present study, there was a significant difference in the expression of MMP-2, MMP-9 and VEGF, and in MVD between the transplanted gastric tumor tissues treated by the class I PI3K inhibitor LY249002 and that of the control group (P < 0.05), indicating that LY249002 may inhibit the gene expression of MMP-2, MMP-9, MVD, and VEGF. We also showed that LY294002 reduced the viability and induced apoptosis in the implanted tumor of human SGC7901 cells, thus demonstrating the cytotoxic effects of LY294002. Both the in vitro invasion assay and the in vivo nude mice assay suggested that LY249002 had the potential to inhibit the invasion and metastasis of gastric cancer. This may be the result of the decrease of the expression of MMP-2, MMP-9, MVD and VEGF together with the cytotoxicity towards the tumor cells, both induced by LY294002. Moreover, no gross adverse effects, i.e. loss of body weight, were observed during our experimental periods. These findings suggest that inhibition of the class I PI3K signaling pathway is a potent and safe strategy for managing gastric cancers, and further indicated that development of LY249002-based therapies may be an emerging approach for the next step in gastric cancer management.

The phosphatidylinositol 3-kinase (PI3K) pathway plays a central role in the regulation of cell proliferation, growth, differentiation, and survival. Dysregulation of this pathway is frequently observed in a variety of tumors, including brain tumors and breast, ovarian and other carcinomas. Currently only a few chemotherapeutic drugs are effective for the treatment of human gastric carcinoma and there is an increasing interest in the use of drugs to prevent its occurrence or invasiveness.

The research indicated that development of LY249002-based therapies may be an emerging approach for the next step in gastric cancer management.

Matrix metalloproteinases (MMPs) are a family of structurally related zinc-endopeptidases. MMP-2 contributes to cell proliferation, migration, and matrix invasion in a number of cell types such as tumor cells and fibroblasts MMP-9 is directly involved in tumor metastasis, and more recently MMP-9 activity has been linked with the process of tumor cell invasiveness. High MVD is an indirect measure of tumor aggressiveness. Vascular endothelial growth factor is a potent regulator of placental vascular function. Endothelial dysfunction is a key factor associated with preeclampsia.

Overall, the experiment was well performed and the authors have presented interesting data to provide a mechanistic insight into the antitumor effect of LY294002.