AIM: To examine the association between -86 bp (T > A) in the glucose-regulated protein 78 gene (GRP78) and hepatitis B virus (HBV) invasion.

METHODS: DNA was genotyped for the single-nucleotide polymorphism by polymerase chain reaction followed by sequencing in a sample of 382 unrelated HBV carriers and a total of 350 sex- and age-matched healthy controls. Serological markers for HBV infection were determined by enzyme-linked immunosorbent assay kits or clinical chemistry testing.

RESULTS: The distributions of allelotype and genotype in cases were not significantly different from those in controls. In addition, our findings suggested that neither alanine aminotransferase/hepatitis B e antigen nor HBV-DNA were associated with the allele/genotype variation in HBV infected individuals.

CONCLUSION: -86 bp T > A polymorphism in GRP78 gene is not related to the clinical risk and acute exacerbation of HBV invasion. 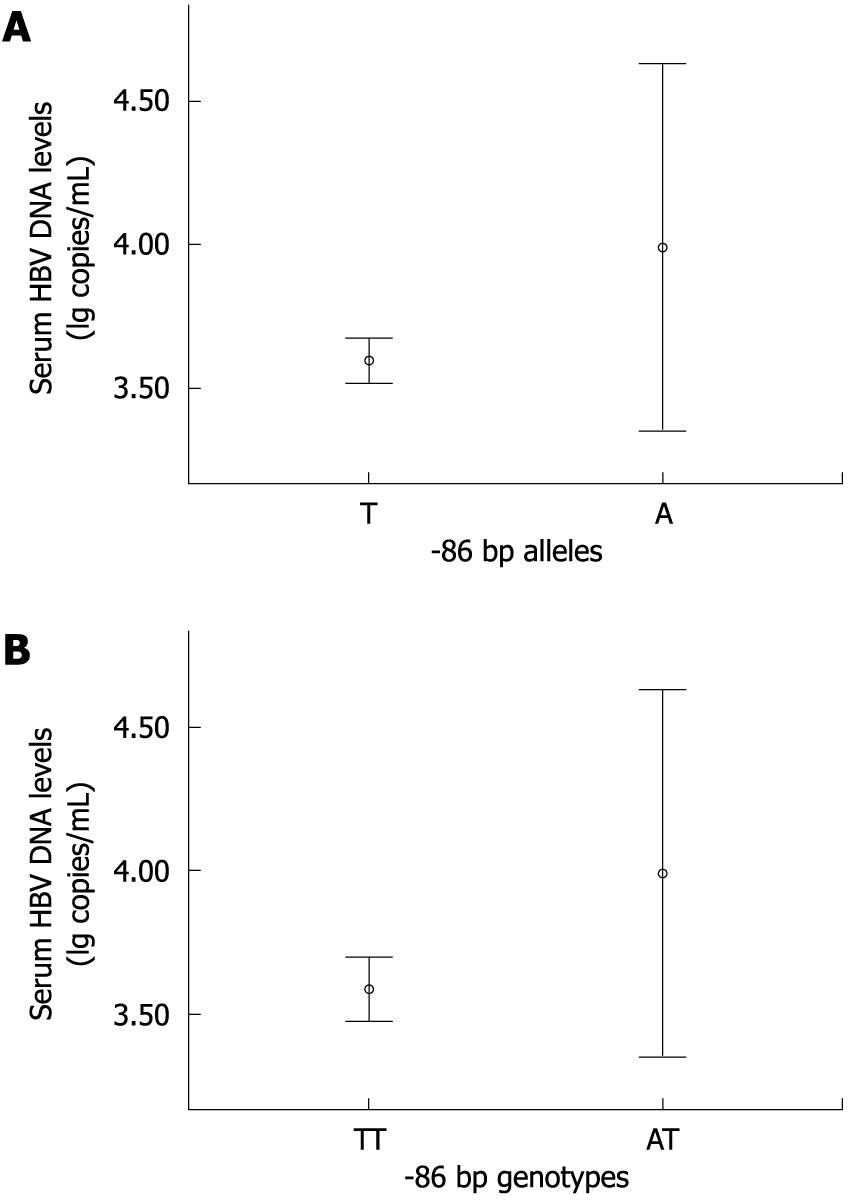 Hepatitis B virus (HBV) is one of the major infectious diseases worldwide and is responsible for significant morbidity and mortality, particularly in developing countries[1]. Of patients with chronic HBV infection, a quarter develop chronic liver disease, which can be associated with hepatoma in some cases[2,3]. Increasing evidence indicates that genetic factors influence the natural history of HBV infection. Recent studies have proposed that a number of polymorphisms influence the progression of patients with HBV infection[4,5].

The glucose-regulated protein 78 (GRP78), also called heat shock 70 ku protein 5, is a stress-inducible endoplasmic reticulum (ER) calcium-binding chaperone[6]. The GRP78 pathway is one of the most important responders to disease-associated stress[7]. An elevated GRP78 level generally correlates with HBV infection[8-10]. As a stress-associated gene, GRP78 may be a contributing factor or marker of stress-associated diseases, such as hepatitis B. HBV invasion and other physiopathologic changes cause a large amount of unfolding or false-folding protein accumulation in the ER, which in turn induces stress in the ER and expression of GRP78[6,11].

The aim of the present study was to elucidate the potential association of -86 bp T > A, a new single-nucleotide polymorphism (SNP) from the estimated translation start site of GRP78, as a host genetic factor with the risk and acute exacerbation of HBV infection in a Chinese population.

A total of 382 unrelated HBV carriers (233 males and 149 females) between 24 and 39 years old (average age 30.5 ± 7.2 years) and a total of 350 sex- and age-matched healthy volunteers (203 males and 147 females) aged between 22 and 36 years old (average age 27.8 ± 7.0 years) who had no history of HBV infection or other conspicuous diseases from the Affiliated Tumor Hospital of Guangzhou Medical College were included in this study. The two groups had a similar frequency of distribution in age and gender (P > 0.05) (Table 1). The diagnosis of HBV infection was based on the presence of hepatitis B surface antigen and hepatitis B e antigen (HBeAg) or e antibodies, together with the absence of anti-HBs, for at least 36 mo prior to enrolment. The present study was approved by the Ethics Committee of Sun Yat-sen University and adhered to the tenets of the Declaration of Helsinki. Informed consent was also obtained from each participant.

χ2 test was used to determine whether there was a significant difference between cases and controls in terms of gender. Mann-Whitney U-test was used to test the difference among the age groups. Hardy-Weinberg equilibrium (HWE) of genotype distribution among cases and controls was carried out using the Pearson χ2 test. A significant difference in polymorphism between cases and controls (or between different subgroup cases) was ascertained by unconditional logistic regression model adjusted for age and gender, in which the odds ratios (ORs) and 95% conﬁdence intervals (CIs) were acquired synchronously. One way analysis of variance (ANOVA) and the Bonferroni test were used to evaluate the association between serum HBV DNA levels and alleles/genotypes in cases. All statistical tests were two-sided and P values less than 0.05 were considered statistically significant.

The observed genotype frequencies conformed to the HWE in both cases and controls (data not shown). According to the logistic regression analysis with adjustment for age and gender, the distributions of allelotype and genotype in HBV cases were not significantly different from those in the controls (P > 0.05, respectively) (Table 2).

The findings in this study indicate that the -86 bp variation is not susceptible to HBV invasion and acute exacerbation.

As some of the polymorphisms may reflect the risk of onset and the severity of disease, assessing the effect of variations on the risk and progression of HBV invasion is important[12,13]. The role of GRP78 as a predisposing gene in the pathogenesis of viral diseases such as HBV has not been previously studied. Although no association was noted with GRP78 using the -86 bp (T > A) SNP marker, there are a number of other loss/gain-of-function SNPs and haplotypes in the GRP78 gene that have not been included in this study, which need further evaluation to conclusively exclude GRP78 as a susceptibility locus.

The data presented in this study also demonstrate that neither ALT/HBeAg nor HBV-DNA were associated with the allele/genotype variation in HBV infected individuals. Because ALT, HBeAg and HBV-DNA are markers for acute infection of HBV[14,15], we can infer that -86 bp (T > A) is not associated with acute exacerbation of HBV invasion.

Moreover, a prospective study on the influence of polymorphisms on disease risk and progression mainly explored a statistical association between alleles/genotypes and clinical events[16]. Therefore, the present study suggests a lack of association between the -86 bp and clinical risk as well as acute exacerbation. These data, however, do not exclude a possible physiopathological role of the GRP78 in HBV progression.

To the best of our knowledge, this new found SNP in a Chinese Han population has not been deposited in a public database (http://www.ncbi.nlm.nih.gov/SNP). Although the functional effects of this polymorphism have not been elucidated, our data show that the specific polymorphism evaluated in this study is not related to HBV susceptibility or acute exacerbation and suggest that, at least in this Chinese population, its role in HBV invasion could be less than expected. However, it must be underlined that this polymorphism should not be completely eliminated as studies with a larger sample size may demonstrate the small differences found in this study to be statistically significant.

Highly variable disease outcomes in infected individuals cannot be fully explained by differences in viral or environmental factors but also involve host genetic susceptibility. Increasing data show that glucose-regulated protein 78 (GRP78) plays a crucial role in the proper folding of hepatitis B virus (HBV) protein. Therefore, we strongly believed that the influence of polymorphism on the risk and progression of HBV invasion should be studied so as to determine whether there is a statistical association between the -86 bp (T > A) genotypes and clinical events.

In general, the present study is part of a series of research studies involving HBV infection and is aimed at mutational analysis of the GRP78 gene among HBV carriers. To the best of our knowledge, this is the first study where an attempt has been made to correlate a new found gene mutation (-86 bp T > A) with HBV risk among Han Chinese.

The -86 bp T > A polymorphism in the GRP78 gene is not related to the clinical risk and acute exacerbation of HBV invasion.

Genetic differences in the gene related to virus invasion may help us to predict an individual’s susceptibility of developing serious disease and assist early detection which can substantially improve the cure rate. This study found that the -86 bp (T > A) is not a susceptible candidate locus, and future research should focus on its potential role in liver cancer risk.

Human GRP78 gene is located on 9q33-q34.1. GRP78 protein is a molecular chaperone that is critical to the folding, maturation and transport of proteins out of cells.

The authors examined the association of a new polymorphism (-86 bp T > A) in the GRP78 gene and risk of HBV infection. They did not find any association between this SNP and risk or acute exacerbation of HBV invasion. This study gives further evidence that GRP78 is not directly involved in HBV infection.