AIM: To determine the prevalence and possible risk factors of Barrett’s esophagus (BE) in patients with chronic gastroesophageal reflux disease (GERD) in El Minya and Assuit, Upper Egypt.

METHODS: One thousand consecutive patients with chronic GERD symptoms were included in the study over 2 years. They were subjected to history taking including a questionnaire for GERD symptoms, clinical examination and upper digestive tract endoscopy. Endoscopic signs suggestive of columnar-lined esophagus (CLE) were defined as mucosal tongues or an upward shift of the squamocolumnar junction. BE was diagnosed by pathological examination when specialized intestinal metaplasia was detected histologically in suspected CLE. pH was monitored in 40 patients.

RESULTS: BE was present in 7.3% of patients with chronic GERD symptoms, with a mean age of 48.3 ± 8.2 years, which was significantly higher than patients with GERD without BE (37.4 ± 13.6 years). Adenocarcinoma was detected in eight cases (0.8%), six of them in BE patients. There was no significant difference between patients with BE and GERD regarding sex, smoking, alcohol consumption or symptoms of GERD. Patients with BE had significantly longer esophageal acid exposure time in the supine position, measured by pH monitoring.

CONCLUSION: The prevalence of BE in patients with GERD who were referred for endoscopy was 7.3%. BE seems to be associated with older age and more in patients with nocturnal gastroesophageal reflux.

Barrett’s esophagus (BE) was first identified by N.R. Barrett in 1950, who described the replacement of the normal squamous mucosa of the distal esophagus by a columnar epithelium of both gastric and intestinal types[12]. The definition of BE has been modified over subsequent years to include only intestinal metaplasia within the tubular esophagus.

The prevalence of BE varies in different geographic areas worldwide. Multiple risk factors for the development of BE besides reflux have been studied, including being Caucasian and/or male, a history of smoking, and hiatus hernia[8].

The aim of this study was to determine the prevalence and possible risk factors of BE in patients with chronic gastroesophageal reflux disease (GERD) symptoms in Upper Egypt.

This study was carried out in accordance with the Declaration of Helsinki (2000) of the World Medical Association. All patients provided informed written consent.

The study was performed at two clinical centers in Upper Egypt (Southern part of Egypt): the endoscopy units of the Department of Tropical Medicine at El Minya University, and the Department of Internal Medicine at Assuit University, from January 2006 to January 2008. Both centers are referral centers for a large number of patients in Upper Egypt.

In a prospective manner, 1000 consecutive patients with chronic GERD symptoms were recruited. All patients had a history of longstanding heartburn and or regurgitation for at least three times weekly for the last year. A questionnaire was completed by every patient, including age, sex, occupation, smoking and alcohol consumption. The symptom questionnaire also included the following criteria: primary referral symptom; frequency of GERD symptoms such as heartburn, regurgitation, and acid taste; extra esophageal symptoms; and history of systemic diseases such as scleroderma and diabetes.

Endoscopic examination was performed using an Olympus Evis CLV-U 200 Videoscope (Olympus, Japan). All patients were examined in our units by a well-trained endoscopist. BE was diagnosed by the presence of columnar-lined esophagus at endoscopy and the confirmed presence of intestinal metaplasia upon biopsy. In addition, information on the presence of intestinal metaplasia, evidence of dysplasia (a premalignant condition characterized by increased cell growth, cellular atypia, and altered cell differentiation) and its severity, and the presence of coexistent EAC was obtained from histopathology records. We defined short-segment BE by the presence of less than 3 cm of columnar-lined esophagus at endoscopy. The distinction between long- and short-segment BE was made. We also recorded the presence of esophagitis or any esophageal lesions. Repeat endoscopy was done in patients with erosive esophagitis after complete healing, to confirm the presence of BE. Then the patients were classified into two groups according to presence or absence of BE.

Fresh endoscopic biopsy samples were obtained from the operating theatre and fixed in 10% formalin within 13 h at room temperature. Tissues were subjected to a series of processing steps, which included fixation, dehydration with ethanol, clearing with xylene, and wax impregnation with paraffin, and then stained with hematoxylin and eosin (HE).

Ambulatory pH monitoring was done for 40 patients (20 patients with BE and 20 without). All patients were studied with ambulatory pH monitoring using an antimony pH electrode placed 5 cm above the proximal border of the manometrically located lower esophageal sphincter, and another electrode placed 10 cm above this point in the proximal esophagus, connected to a portable Digitrapper (Synectics, San Antonio, TX, USA) data storage unit. Intraesophageal pH was recorded continuously, with sampling obtained every 4 s. All pH tracings were analyzed for the percentage time that the distal and proximal esophageal pH was < 4, determined for the upright and recumbent time periods in each study. Average esophageal acid clearance (EAC) time was calculated for each patient by dividing the total time (in minutes) that distal esophageal pH remained < 4 by the total number of GERD episodes. This was calculated for both the upright and supine periods.

This study included 1000 patients with chronic GERD symptoms (764 male and 236 female) with a mean age of 38.81 ± 14.52 years. Seventy-three of these patients (7.3%) had BE suspected endoscopically and detected histopathologically. The remaining 927 patients (92.7%) were negative for BE. Accordingly, we classified the patients into two groups: group A included patients with BE and group B included those with chronic GERD without BE. The mean length of BE was 5.3 ± 2.6 cm. Short-segment BE was present in 61 patients (84%), while long-segment BE was present in 12 (16%). Four cases with BE were detected in endoscopy-negative patients, while the remainder was detected in patients with esophagitis. EAC was detected in eight patients (six in group A and two in group B).

Endoscopic examination detected esophagitis in 498 patients (49.8%) and non-erosive reflux disease (NERD) was seen in 502 patients (Figure 1). Only four cases with BE were seen among patients with NERD. 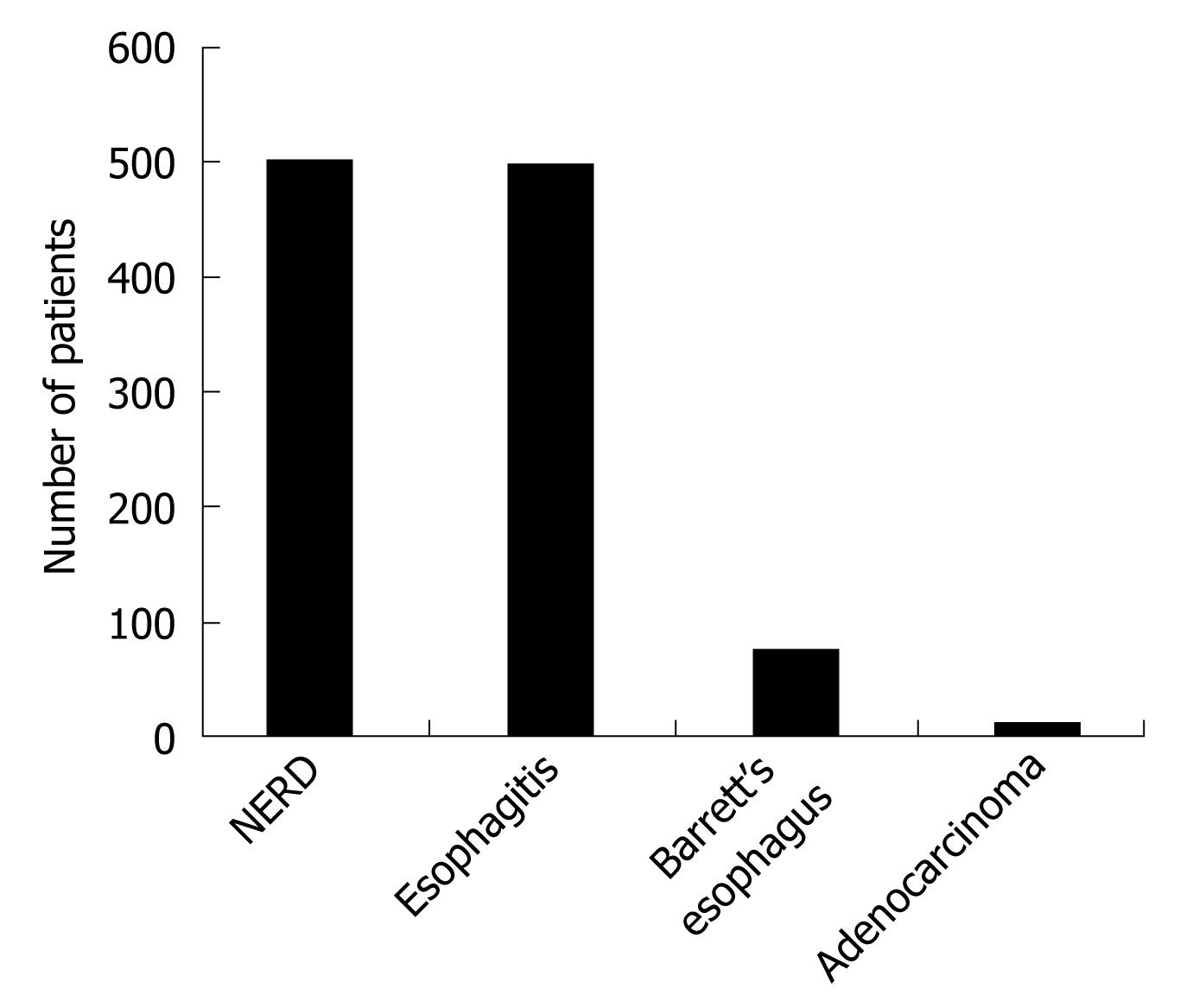 The histopathology of BE and EAC is shown in Figures 3 and 4. 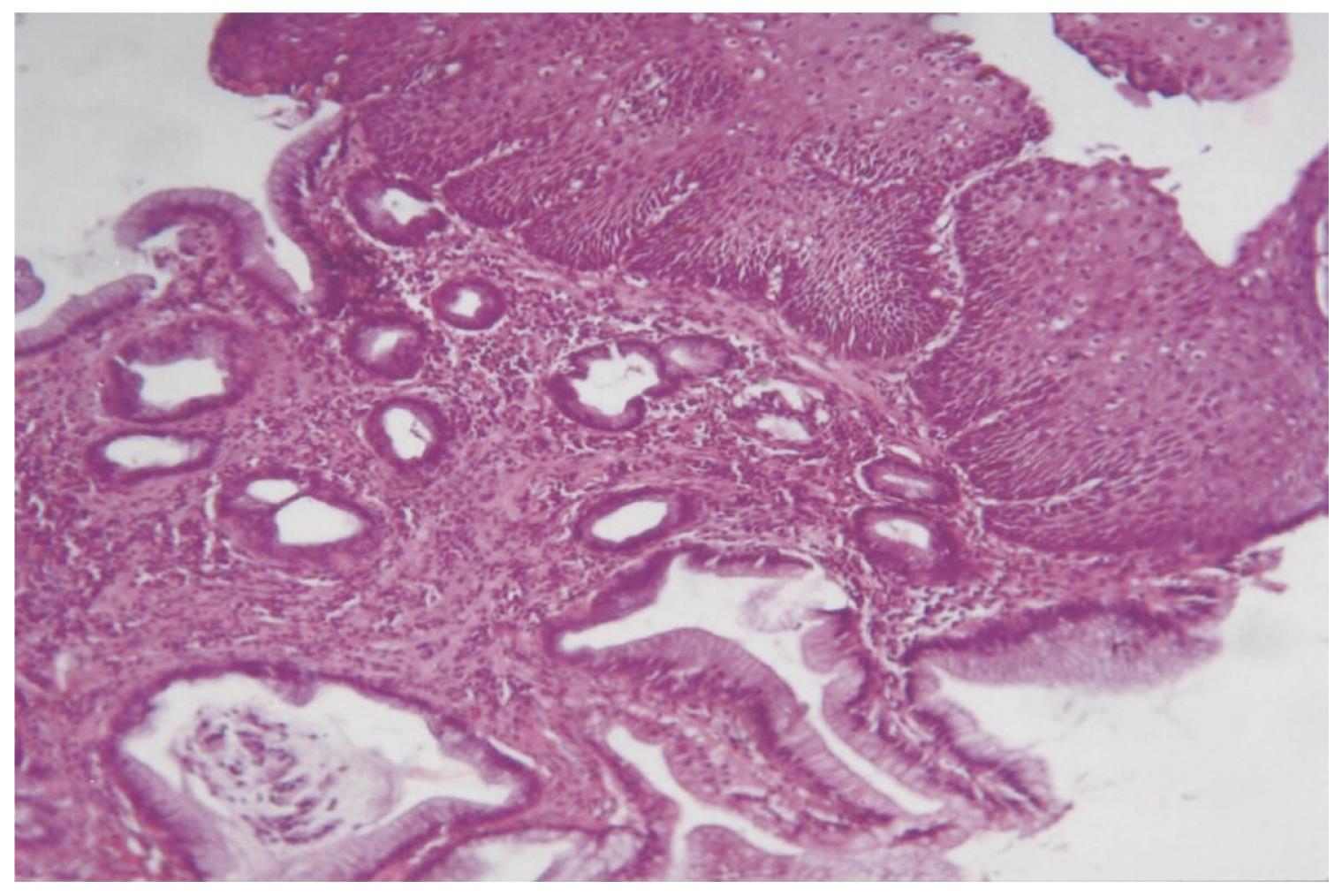 Figure 3 BE without dysplasia, showing true barrel-shaped goblet cells and intervening columnar cells, with incomplete brush-border, intestinal type metaplasia. The squamous epithelium of the normal esophagus was transformed into columnar epithelium (HE, × 200).

The prevalence of BE varies around the world and it seems to be higher in western than eastern countries. Focusing on patients who presented for their initial endoscopy in the setting of suspected GERD, Westhoff et al[8] studied 378 consecutive patients who had biopsies taken from areas suspicious for BE. The overall prevalence of BE was found to be 13.2%. The majority of patients diagnosed had short-segment BE, which agreed with previous data that showed the prevalence of endoscopically recognizable short-segment BE at 5%-7% vs 1%-3.4% for long-segment BE[910].

Ronkainen and colleagues have used a population-based study to estimate the prevalence of BE in Sweden. Of 19 000 subjects within a target age range of 20-80 years, a random sample of 3000 was surveyed by questionnaire. A random sub-sample of 1000 subjects then underwent upper digestive system endoscopy, in which an overall BE prevalence of 1.6% was observed. However, when reflux symptoms were present, the prevalence rose to 2.3%[11]. In another study in Korea, Kim et al[12] have found that, in the general population, the prevalence of BE was < 1%, and remained less common in Korea than in western countries.

In our study, the prevalence of BE did not differ significantly between men and women, although the number of men recruited was much higher than women. Probably, men have more reflux symptoms or seek medical advice and endoscopic evaluation more than women do. Lin et al[13] have studied 543 patients with GERD symptoms, and have shown that while male and female patients demonstrated an equal severity of erosive esophagitis, only 14% of female patients had BE, compared to 23% of male patients (P < 0.05). However, Banki et al[14] have shown that there was an equal prevalence of BE in men and women diagnosed with severe reflux by 24-h pH monitoring. A chart review of almost 22 000 first endoscopies identified 492 patients with BE, and suggested that there was a 20-year age shift between men and women in prevalence patterns, which resulted in a male to female OR of 4.15 (95% CI: 2.99-5.77)[15].

In our study, the mean age in patients with BE was significantly older than in those without BE. Other studies have demonstrated that increased age is a risk factor for developing BE, as well EAC[1617].

We conclude that BE is present in about 7.3% of patients with chronic GERD symptoms in our area. It may be associated with older age and nocturnal gastroesophageal reflux.

Barrett’s esophagus (BE) is gaining importance because of its association with esophageal adenocarcinoma (EAC). Its prevalence varies around the world. However, there are no data about its prevalence in upper Egypt.

This is the first study to report prevalence of BE in Upper Egypt.

This study may represent a future strategy for screening for BE and AEC in patients with chronic gastroesophageal reflux disease.

This was a well-conducted and interesting study that investigated the prevalence of BE in Upper Egypt.