We describe a 15-mm scirrhous hepatocellular carcinoma (HCC) in a 60-year-old man with B-type cirrhosis. Ultrasound disclosed a 15-mm hypoechoic nodule in segment 7. Contrast-enhanced US revealed heterogeneous, not diffuse, hypervascularity in the early phase and a defect in the Kupffer phase. Contrast-enhanced computed tomography (CT) revealed a heterogeneous hypervascular nodule in the early phase and a low-density area in the late phase. Magnetic resonance imaging (MRI) revealed iso- to hypointensity at T1 and high intensity at T2-weighted sequences. Contrast-enhanced MRI also revealed a heterogeneous hypervascular nodule in the early phase and washout in the late phase. Super-paramagnetic iron oxide-MRI revealed a hyperintense nodule. CT during hepatic arteriography and CT during arterial portography revealed heterogeneous hyperattenuation and a perfusion defect, respectively. Based on these imaging findings the nodule was diagnosed as a mixed well-differentiated and moderately-differentiated HCC. Histologically, the nodule was moderately-differentiated HCC characterized by typical cytological and structural atypia with dense fibrosis. Immunohistochemically, the nodule was positive for heterochromatin protein 1 and alpha-smooth muscle actin, and negative for cytokeratin 19. From the above findings, the nodule was diagnosed as scirrhous HCC. Clinicians engaged in hepatology should exercise caution with suspected scirrhous HCC when imaging studies reveal atypical findings, as shown in our case on the basis of chronic liver disease.

According to World Health Organization (WHO) classifications, hepatocellular carcinoma (HCC) with diffuse fibrosis is subclassified as scirrhous-type HCC (SHCC)[1]. Histologically, it is characterized by diffuse fibrosis along the sinusoid-like blood spaces with varying degrees of atrophy of tumor trabeculae. Preoperative images by computed tomography (CT) and magnetic resonance imaging (MRI) are, however, often misdiagnosed as those of cholangiolocellular carcinoma (CCC), HCC-CCC, and metastatic carcinoma due to heterogeneous enhancement in the early phase and prolonged enhancement in the late phase attributed to abundant fibrous stroma. Moreover, imaging studies for the diagnosis of SHCC, such as contrast-enhanced ultrasound (US), CT during hepatic arteriography (CTA) and CT during arterial portography (CTAP) have so far not been described. Here, we present a case of moderately differentiated SHCC that histologically manifested as typical cytological and structural atypia with dense fibrosis, whereas imaging studies with contrast-enhanced CT, MRI, US, CTA and CTAP revealed a mixed well-differentiated and moderately-differentiated HCC. 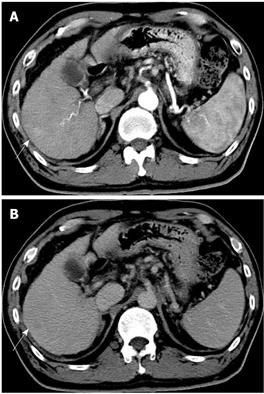 Figure 1 Contrast-enhanced CT. Heterogeneous, not diffuse, hypervascular nodule in the early phase (A) (arrow), and a low-density area in the late phase (B) (arrow). 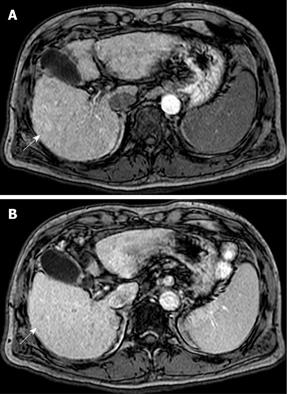 Figure 2 Contrast-enhanced MRI. A heterogeneous hypervascular nodule in the early phase (A) (arrow), and washout in the late phase (B) (arrow). 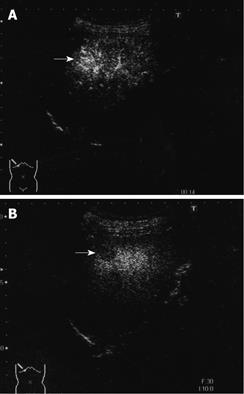 Figure 3 Contrast-enhanced US. Heterogeneous hypervascularity in the early phase (A) (arrow), and defect in the Kupffer phase (B) (arrow). 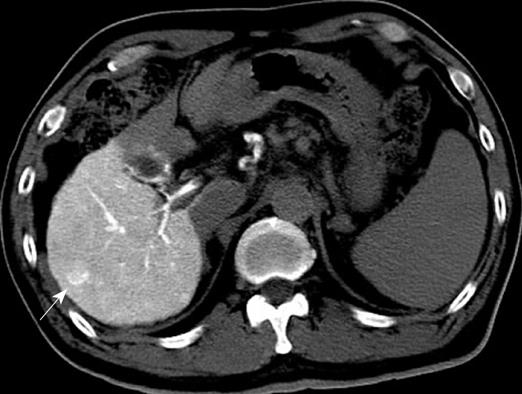 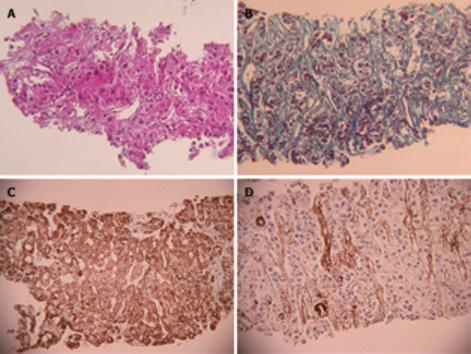 The clinical background of SHCC is not significantly different from that of non-SHCC with regard to age, gender, positive rates to hepatitis viruses, AFP levels, Child-Pugh classification, and the stage of tumor-node-metastasis. In both morbidities, over 60% of cases are associated with chronic hepatitis rather than with liver cirrhosis. HCC patients with liver cirrhosis and liver dysfunction tend not to undergo surgery. In our case, resection was not carried out because of poor liver function attributed to liver cirrhosis.

With no clear pathological definition of SHCC, in particular a standard for the degree of the fibrosis for diagnosing the disease, its rate varies between 0.2% and 4.2%[23]. Regarding terminology, SHCC is often confused with “sclerosing hepatic carcinoma” that is used to designate a variety of tumors with sclerotic change and hypercalcemia arising in non-cirrhotic livers[4]. Sclerosing hepatic carcinoma does not, however, constitute a distinct histopathological entity; some of these tumors appear to be HCC, others CCC. Therefore, sclerosing hepatic carcinoma has been deleted from the WHO classification[1]. Kurogi et al[5] have defined SHCC as a tumor with diffuse fibrous changes in almost the entire area of the largest cross-section of the tumor and a mean fibrotic area of 39% compared with only 4.6% in non-SHCC.

SHCC is characterized by stellate fibrosis (84%), no encapsulation (absence of capsule) (100%), no necrosis and hemorrhage (100%), intratumoral portal tracts (80%), remarkable lymphocyte infiltration (84%), clear cell change (84%), and hyaline bodies (52%). The number of α-SMA-positive myofibroblast-like cells (activated stellate cells) in the tumor is about three times that in non-SHCC[5].

SHCC is occasionally misdiagnosed as fibrolamellar carcinoma (FLC) because of the presence of lamellar fibrosis. FLC is common in young adults and usually arises in the liver without any underlying chronic liver disease. Histologically, FLC is characterized by polyhedral, deeply eosinophilic neoplastic hepatocytes with round nuclei and distinct nucleoli, many of which contain intracytoplasmic hyaline globules and distinct pale bodies, and fibrosis arranged in a lamellar fashion around the neoplastic hepatocytes[67]. Conversely, although SHCC occasionally presents with lamellar fibrosis, the cancer cells being different from those of FLC, it is common in older patients with associated chronic hepatitis or liver cirrhosis[5]. Accordingly, it is not difficult to differentiate SHCC from FLC. In our case, the nodule was not diagnosed as FLC, clinically or histologically.

The US pattern was mostly hypoechoic, and contrast-enhanced CT and MRI revealed mostly heterogeneous hypervascularity in the early phase. The most characteristic feature of the imaging studies was prolonged enhancement in the late phase. Incidentally, imaging studies such as contrast-enhanced US, CTA and CTAP have, so far, not been described for use in the diagnosis of SHCC. Misdiagnosis by imaging studies is more frequent in SHCC than non-SHCC. Of 25 cases of SHCC, nine (36%) have been diagnosed as CCC, combined HCC-CCC, and metastatic carcinoma characterized by abundant fibrous stroma, the misdiagnosis being attributed to the prolonged enhancement of the tumor in the late phase and heterogeneous enhancement in the arterial phase on contrast-enhanced CT[5].

In our case, contrast-enhanced CT, MRI, US revealed heterogeneous hypervascularity in the early phase; the nodule was not misdiagnosed as CCC or HCC-CCC because the imaging findings showed no prolonged enhancement in the late phase. The nodule was misdiagnosed as well-differentiated and moderately-differentiated HCC on contrast-enhanced CT, MRI and US, which showed heterogeneous hypervascularity in the early phase and washout in the late phase; CTA and CTAP showed heterogeneous hypervascularity in the arterial and perfusion defect in the portal phases. Immunohistochemically, the nodule was negative for CK19 and, therefore, not CCC. Although contrast-enhanced US, CTA and CTAP did not indicate SHCC, these modalities are very effective in showing the heterogeneous vascular component, washout and perfusion defect of the nodule and contribute to precise diagnosis.

Clinicians engaged in hepatology should exercise caution with suspected SHCC when imaging studies reveal atypical findings, as shown in our case on the basis of chronic liver disease.