Citation of this article
Dabrowska MM, Panasiuk A, Flisiak R. Signal transduction pathways in liver and the influence of hepatitis C virus infection on their activities. World J Gastroenterol 2009; 15(18): 2184-2189

Hepatitis C virus (HCV) was discovered by Choo et al[1]. in 1989. HCV is included in the Flaviviridae family within the distinct genus of Hepacivirus[2]. According World Health Organization (WHO) data, there are currently about 170 million HCV-infected persons worldwide, which is approximately 3% of the human population. In Poland, the number of chronic HCV-infected persons is estimated to be 750 000, which is about 1.4 % of the general population[3]. In the natural history of HCV infection, there is an 80% risk of chronic infection, as well as the high possibility of severe complications such as liver cirrhosis or hepatocellular cancer (HCC).

The JAK signal transduction pathway is activated by more than fifty different cytokines and growth factors. This intracellular pathway operates not only in hepatocytes but also in immune, hematopoietic and neural system cells. After extracellular ligand-receptor interaction, receptor multimerization and the activation of JAK1, JAK2, JAK3 and tyrosine kinase 2 (Tyk2) is observed. The receptor-kinase complex phosphorylates cytoplasmic SH-2-containing transcription factors: signal transducers and activators of transcription (STAT) 1, 2, 3, 4, 5, 6. Activated STATs present two main functions: signal and transcriptional by forming homo- and heterodimers, which translocate to the nucleus to influence transcription. STATs are specifically inhibited by protein inhibitors of activated STAT (PIAS)[4] and by suppressor of cytokine signaling (SOCS) through negative feedback control (Figure 1A). SOCS proteins include SOCS 1, 2, 3 and cytokine-induced Src homology 2 protein (CIS), which bind to JAK kinase inhibiting its enzymatic activity[5]. 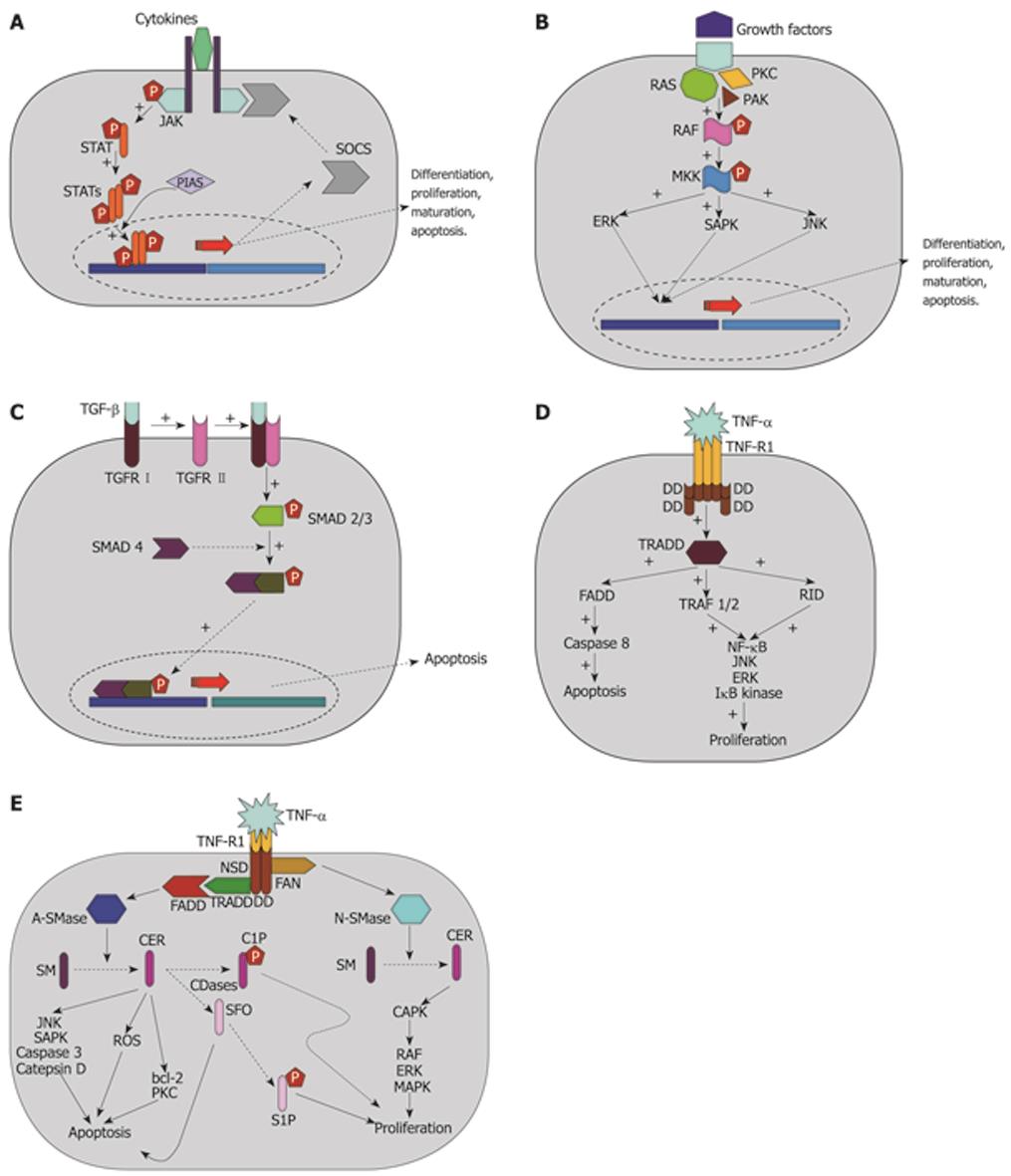 STATs perform different, often opposing functions in the liver. STAT1 is mainly activated by IFN type I (IFN-α/β) and IFN type II (IFN-γ). Its essential function in liver is the participation in antiviral immune defense, as well as in the development of inflammation and apoptosis. IFN-α/β and IFN-λ are ligands for STAT2, whose major function is antiviral defense. Membrane the IFN-α/β receptor (IFNAR) is a complex of two subunits: IFNAR1 and IFNAR2. IFNAR2 presents three diverse forms: full-length IFNAR2c is responsible for signal transduction and transcription process, whereas short form IFNAR2b and soluble form IFNAR2a inhibit these processes[6]. The complex IFN-α/β - IFNAR activates JAK1 and Tyk2 kinases. IFN-γ takes effect by IFN-γ receptor (IFNGR): IFNGR1 and IFNGR2. STAT3 function is especially regulated by IL-6 and its family members such as cardiotrophin-1 (CT-1), oncostatin M (OSM), IL-11, leukemia inhibitory factor (LIF) or ciliary neurotrophic factor (CNTF), by IL-10, IL-22, EGF and HCV proteins. STAT3 participates in the acute phase response, stimulates hepatocytes regeneration and regulates lipid and carbohydrate metabolism in the liver[7]. Moreover STAT3 is one of the main anti-HCV-defense elements that acts by increasing the IFN-α antiviral effect and by its direct cytoprotective and anti-inflammatory influence on hepatocytes[8]. IL-6 and its related cytokines bind gp130 receptor protein, which plays a key role in liver regeneration.

Furthermore, Li et al[9] confirmed that gp130 activity is independent of the activities of other kinases, such as MAKP. The ligand-gp130 complex activates JAK1, JAK2 and Tyk2. Recently, the influence of HCV infection on STAT1-3 factors was demonstrated. HCV structural proteins C, E2 and non-structural protein NS5A were shown to reduce the number of membrane receptors (IFNAR1 and IFNAR2c) blocking STAT1-3 activation by IFN-α. STAT1-3 are also inactivated by ethanol and increased level of TNF-α, IL-1β and IL-10[7]. As a result, viral replication, as well as inflammation and fibrosis in the liver, is augmented and has a negative effect on IFN-α treatment response among patients with severe liver damage. However, HCV does not affect IFN-γ function, and in consequence, STAT1 activation[10]. Moreover, Sun and Gao showed that IFN-γ produced by NK cells inhibits hepatocytes regeneration during HCV infection[11]. STAT4 is the least known transcription factor. STAT4 has been shown to be activated by IL-12 and to play a critical role in hepatocytes damage during hepatic ischemia/reperfusion injury and in Th1 differentiation[12]. STAT5 is mainly activated by growth factors and regulates the expression of genes encoding cytochrome P450, HGF and insulin growth factor 1 (IGF1), which are essential for hepatocytes metabolism, growth and differentiation. STAT6 is regulated by IL-4, IL-12 and IL-13. These factors participate in Th2 lymphocytes response during viral hepatitis and reduce hepatocytes damage during hepatic ischemia/reperfusion injury. A summary of STATs activation and function are shown in Table 1.

EGF, HGF and TGF-α bind with membrane receptors having intrinsic tyrosine kinase enzymatic activity. Ligand-receptor complex multimerization and autophosphorylation are then observed. Ras proteins and GTP create a transient complex activating RAF kinases and MAPK kinases (MKK), which can activate MAPK by dual phosphorylation of threonine and tyrosine. Activated MAPK phosphorylates transcription factors such as cAMP response element-binding (CREB) and Ets-related transcription factor 1 (ELK-1). The MAPK signal transduction pathway is evolutionarily one of the oldest signal transduction pathways in eukaryotic cells. It contains three different signal tracts: the extracellular regulated protein kinase (ERK, p42/44 MAPK) tract, the stress activated protein kinase (SAPK, p38 MAPK, p38-RK or p38) tract, and the c-Jun-NH2-terminal kinase (JNK, p64/54 SAPK) tract (Figure 1B). All of these pathways regulate processes such as cell growth, differentiation, maturation, proliferation and apoptosis. In mammalian cells every single pathway is activated by two MKK: JNK by MKK4 and MKK7, ERK by MKK1 and MKK2, and SAPK by MKK3 and MKK6. This dual role of MKK in the activation of the JNK, ERK and SAPK signal transduction pathways is still unclear[13]. It has been shown that ERK play a key role in the regeneration of the majority of eukaryotic cells. However the role of SAPK, especially in hepatocytes regeneration, is as yet undefined. Physiologically, the activity of JNK in the liver is minimal but increases during liver regeneration, probably associated with high hepatic TNF-α levels[14].

TGF-β is cytokine family member that plays a key role in the processes of cell growth, differentiation, adhesion, apoptosis, and synthesis and degradation of the extracellular matrix. In the liver, during HCV infection, TGF-β is responsible for hepatocytes regeneration and fibrosis, and for epithelial cells proliferation and differentiation. TGF-β1 serum concentration in patients with chronic liver diseases, including chronic HCV infection, is higher the more severe the liver failure is, confirming the association between this cytokine and hepatic fibrosis[15]. Concurrently, in patients with chronic hepatitis C, TGF-β1 serum concentration decreases and normalizes after successful antiviral therapy[16].

The TGF-β membrane receptor consists of two subunits having intrinsic serine/threonine kinase enzymatic activity: the type I receptor (TβR-I) and the type II receptor (TβR-II). After binding of the ligand to TβR-II, TβR-I is phosphorylated in the GS domain containing many glycine and serine amino acids. Activated TβR-I influences receptor-specific R-Smad proteins (Smads) and common-partner Smad (Co-Smad). SMADs are a class of proteins that modulate the activity of transforming growth factor beta ligands. Newly created complexes translocate to the nucleus and stimulate transcription and apoptosis[17] (Figure 1C). During liver regeneration, elevated TGF-β concentration is observed, though it does not give rise to an increase of hepatocytes apoptosis, which is probably linked with parallel augmentation of the concentrations of Smads: Ski and SnoN, and other antiapoptotic proteins such as Bcl-2 and Bcl-X in hepatocytes[18]. HCV, through the NS5A protein, inhibits TGF-β signal transduction pathway activity. NS5A reacts directly with TβR-I using the region between amino acids 148 and 237. As a result, Smads phosphorylation, complex creation and its migration to the nucleus are blocked. In contrast, NS5B protein has no inhibitory effect on TβR-I. TGF-β pathway inhibition can be the result not only of HCV infection, but also of other viruses such as hepatitis B virus (HBV), adenoviruses and HPV. This effect can be due to the direct interaction between the X protein and Smad4 (HBV), interaction between the E1 protein and R-Smad (adenoviruses) or through the inhibitory effect of the E7 protein on R-Smad and Co-Smad complex formation in the nucleus (HPV)[19].

A further second messenger of sphingolipid signal transduction pathway is sphingosine (SFO). SFO is synthesized from the hydrolysis of Cer by ceramidases (CDases). SFO has a key role in apoptosis by stimulating ROS production in mitochondria and activation of caspase 3, 7 and 8[32]. Additionally, sphingosine inhibits Akt, resulting in the augmentation of the cellular effects of cytochrome c and caspase 3[33]. Moreover, SFO directly blocks DNA synthesis, methylation and replication. SFO also reduces the activity of protein kinases such as PKC, calmodulin-dependent protein kinase and insulin receptor kinase. The PKC inhibition proceeds in two parallel ways: directly and indirectly by decreasing the level of intracellular diacylglycerol (DAG) and Ca2+ ions. The PKC inhibition leads to disturbances of nuclear proteins phosphorylation (RNA polymerase, topoisomerase II, histones and matrix proteins[34]). Some studies underline the proliferative character of SFO. It seems that low cellular concentrations of SFO stimulate cell proliferation and DNA synthesis, whereas the high concentrations stimulate apoptosis.

Sphingosine-1-phosphate (S1P), synthesized from SFO, has a potent anti-apoptotic character. An increase in the intracellular level of S1P can activate cell proliferation and its passing from G1 phase to S phase, augment the general number of cells resting in S phase, shorten the time needed for cell division, enhance survival rate of cells subjected to proapoptotic factors, mobilize calcium ions from intracellular compartments, influence cytoskeletal architecture and the processes of cell migration and adhesion. S1P modulates cell functions in two different ways: as an intracellular messenger and as a ligand of G protein-coupled receptors, known as endothelial differentiation genes (Edg) - Edg-1, -3, -5, -6 and -8[35].

Recently, some studies have shown that the inhibition of sphingolipid metabolism can be a new therapeutic target for HCV infection[37].

All phases of HCV replication cycle are intracellular and consequently require signal transduction to the host cell nucleus to regulate transcription of viral genes. Although the pathogenesis of transmembrane and intracellular signal transduction during HCV infection is still unclear, it has been shown that HCV could influence activity of the second signal messengers. This mechanism can regulate specific cell mechanisms such as hepatocytes proliferation, growth, differentiation, adhesion, apoptosis, and synthesis and degradation of the extracellular matrix, leading to severe complications of chronic HCV infection such as liver cirrhosis or hepatocellular cancer. For instance HCV, through the NS5A protein, inhibits the TGF-β, signal transduction pathway activity and through the core protein C and, to a lesser degree, the NS4B protein, influences production of proinflammatory cytokines such as TNF-α. Accordingly, it seems that the inhibition of the activity of the intracellular messengers and pathways could be a new therapeutic target for chronic hepatitis C treatment, leading not only to overall HCV elimination from hepatocytes and from other extrahepatic components, but also to decrease the possibility of developing chronic hepatitis C complications. Moreover, the discovery of the role of the JAK signal transduction pathway as the principal signaling pathway for IFN-α opens new research options for a better understanding of IFN-α resistance. HCV structural proteins C and E2 and non-structural protein NS5A have been shown to reduce the number of membrane receptors IFNAR1 and IFNAR2c blocking STAT1-3 activation by IFN-α. As a result, viral replication, as well as inflammation and fibrosis in the liver, are augmented and has a negative effect on IFN-α treatment response among patients with severe liver damage. Therefore, a better understanding of these signaling defects might lead to new therapeutic strategies, making IFN-α therapy more effective in a larger percentage of patients with chronic hepatitis C infection.