AIM: To investigate the effect of Lianshu preparation on lipopolysaccharide (LPS)-induced diarrhea in rats.

METHODS: A diarrhea model was established in Sprague Dawley rats via injection of 1 mL of 30 mg/kg LPS. A total of 40 rats were randomly divided into normal group, LPS group, LPS + Lianshu group, LPS + berberine group (n = 10 in each group). Their intestinal mucosal barrier and frequency of diarrhea were observed. Levels of glucose, serum Na+, K+, Cl- and hematocrit, plasma nitrogen monoxide (NO), diamine oxidase (DAO), and D (-)-lactate were measured. The number of IgA+ plasma cells in small intestine was detected and SIgA levels in the intestinal fluid were measured. The antipyretic activity of Lianshu preparation in rats was evaluated using Brewer’s yeast-induced pyrexia (10 mL/kg of 20% aqueous suspension). Acetaminophen (250 mg/kg, intragastric administration, bid) was used as a standard drug for comparison. Temperature was recorded 1 h before and 6 h after Brewer’s yeast injection. Finally, small intestinal transmission in mice treated with Lianshu was detected after intraperitoneal injection of methyl prostigmin (2 mg/kg). Atropine (10 g/kg) was used as a control. The ink content in intestine was determined and the total length of intestine was measured.

CONCLUSION: Lianshu preparation has therapeutic effects on LPS-induced diarrhea and enterokinesia in rats.

Infectious diarrhea is often caused by Gram-negative bacteria such as Escherichia coli. These organisms contain lipopolysaccharide (LPS). Antibiotics developed in the 1940s have saved millions of people’s life. However, because of the widespread and inappropriate use of antibiotics, some bacterial strains become antibiotic-resistant. Antibiotic-resistant bacteria and side effects of antibiotics severely threaten the general welfare and health of people. Folk herbal drugs have been extensively studied in recent years for the treatment of acute diarrhea. This study was to investigate the effect of Lianshu preparation on LPS-induced diarrhea in rats.

Eighty adult female and male Sprague-Dawley rats, weighing 230-280 g (Experimental Animal Breeding Center, Fudan University), and thirty 5-wk-old female and male Kunming mice, weighing 18-20 g, were used in this study following the guidelines of the Animal Care Committee of Institute of Chinese Medicine, Tongji University. The animals were housed at 22 ± 2°C with a humidity of 55% ± 5% in a 12-h light/dark cycle for at least 1 wk prior to use, with free access to laboratory chow and tap water.

Rats were randomly divided into normal group, LPS group, LPS + Lianshu group, LPS + berberine group (n = 10 in each group). Before exposure to LPS, rats in normal and LPS groups were treated with distilled water, rats in LPS + Lianshu group were given Lianshu preparation (1.8 g/kg), rats in LPS + berberine group received berberine (0.2 g/kg) twice a day for 3 d. The rats were allowed to have water alone for 12 h. One hour after the last administration of drugs, rats in all groups apart from those in the normal group were treated with LPS (30 mg/kg).

After treated with LPS, rats in each cage had a filter paper couch. Filter paper was changed once an hour for 4 h. The frequency of diarrhea was determined by counting the number of feces deposits on the filter paper.

Four hours later, 8 mL of blood was drawn from the abdominal aorta of each rat after anesthetized with 10 mg/kg intraperitoneal pentobarbital. Of the 8 mL blood, 2 mL was treated with heparin for erythrocrit analysis, 2 mL was centrifuged at 3000 ×g for 15 min at 4°C. Blood glucose and serum Na+, K+, Cl- levels were measured.

Measurement of plasma NO, DAO and D (-)-lactate levels

Four milliliters of blood was centrifuged at 3000 ×g for 15 min at 4°C. Plasma was collected to measure NO at 550 nm as previously described[1]. DAO and D (-)-lactate levels were measured by spectrophotometry at 436 nm[2] and enzyme-linked ultraviolet spectrophotometry[3], respectively. The absorbance at 340 nm was recorded.

After humane killing, a 5-cm long section of ileum 10 cm below the Treitz ligament was removed, dissected longitudinally, fixed in 100 mL/L formalin, embedded in paraffin, stained with hematoxylin and eosin, and observed under a light microscope.

Determination of SIgA in small intestine

A small intestine segment about 5 cm long, 15 cm below the Treitz ligament, was removed. Intestinal fluid was collected by passing 5 mL PBS and 0.02% sodium into the small intestine. The first intestinal washing removed 85%-90% of total IgA, and the variability of samples was less than 5%. The washed out material was centrifuged at 3000 ×g for 10 min at 4°C. The supernatant was harvested and stored at -70°C. Total IgA was determined by ELISA.

Data were expressed as mean ± SE and analyzed by analysis of variance and Student-Newman-Keuls test. P < 0.05 was considered statistically significant.

Frequency of diarrhea after injection of LPS 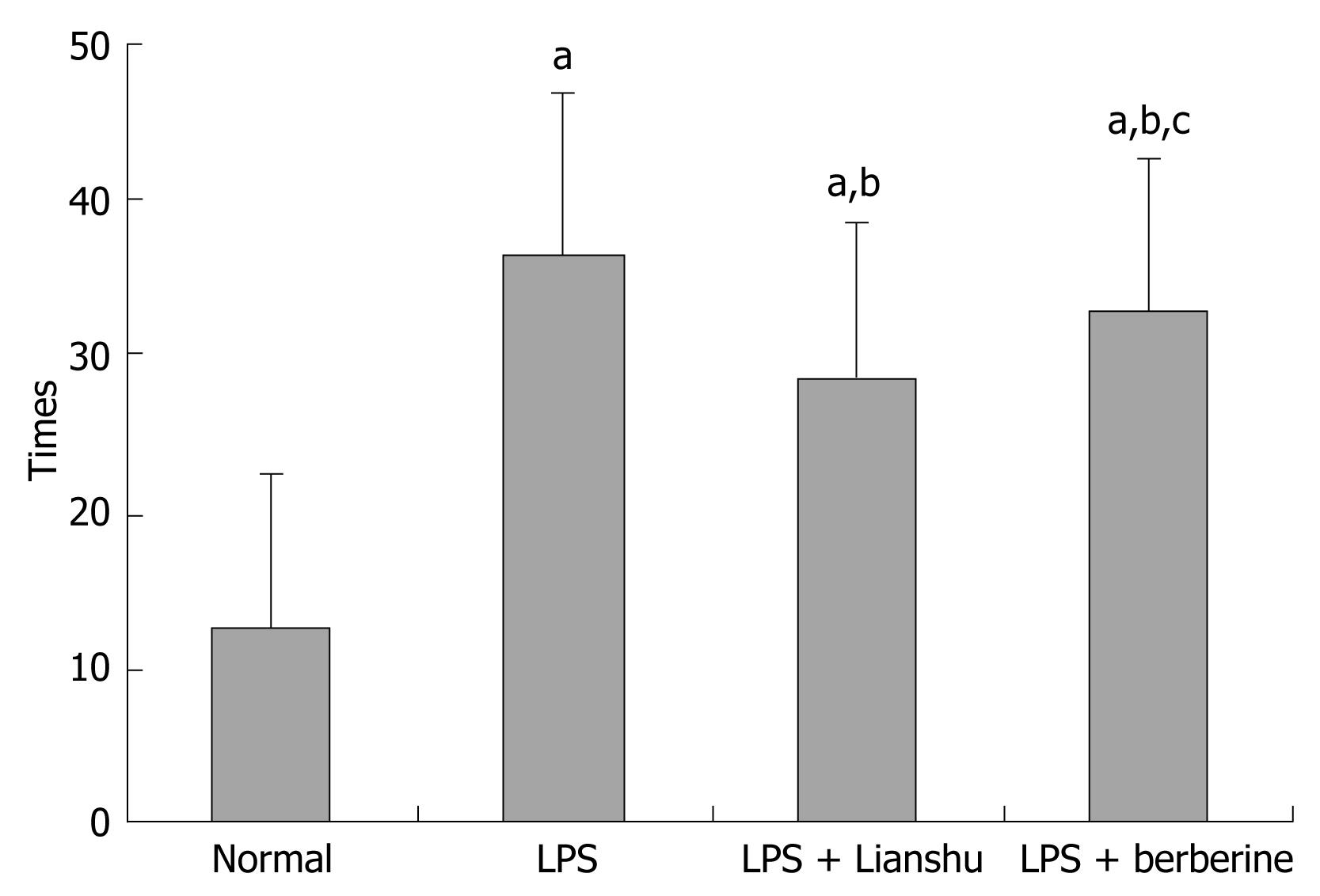 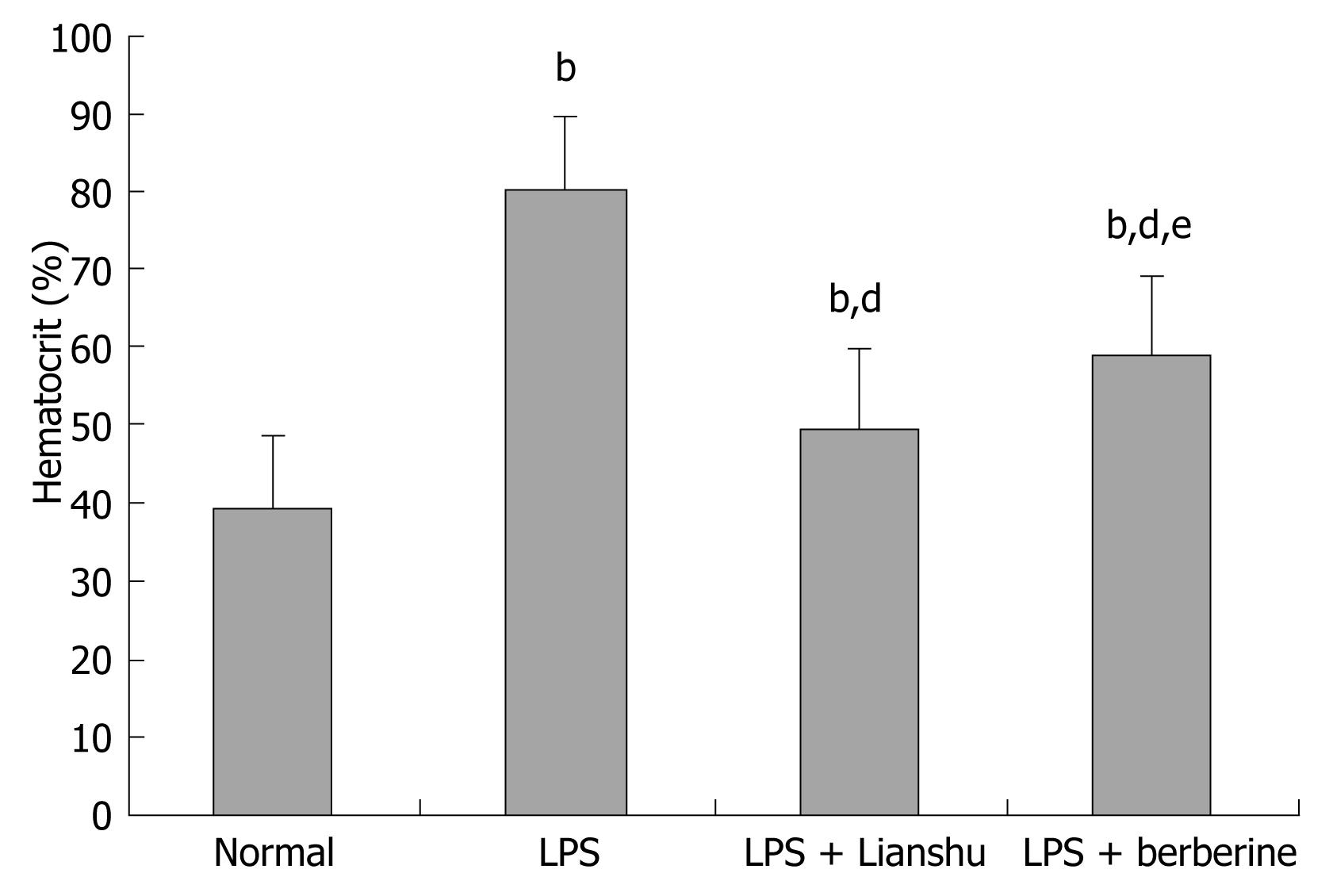 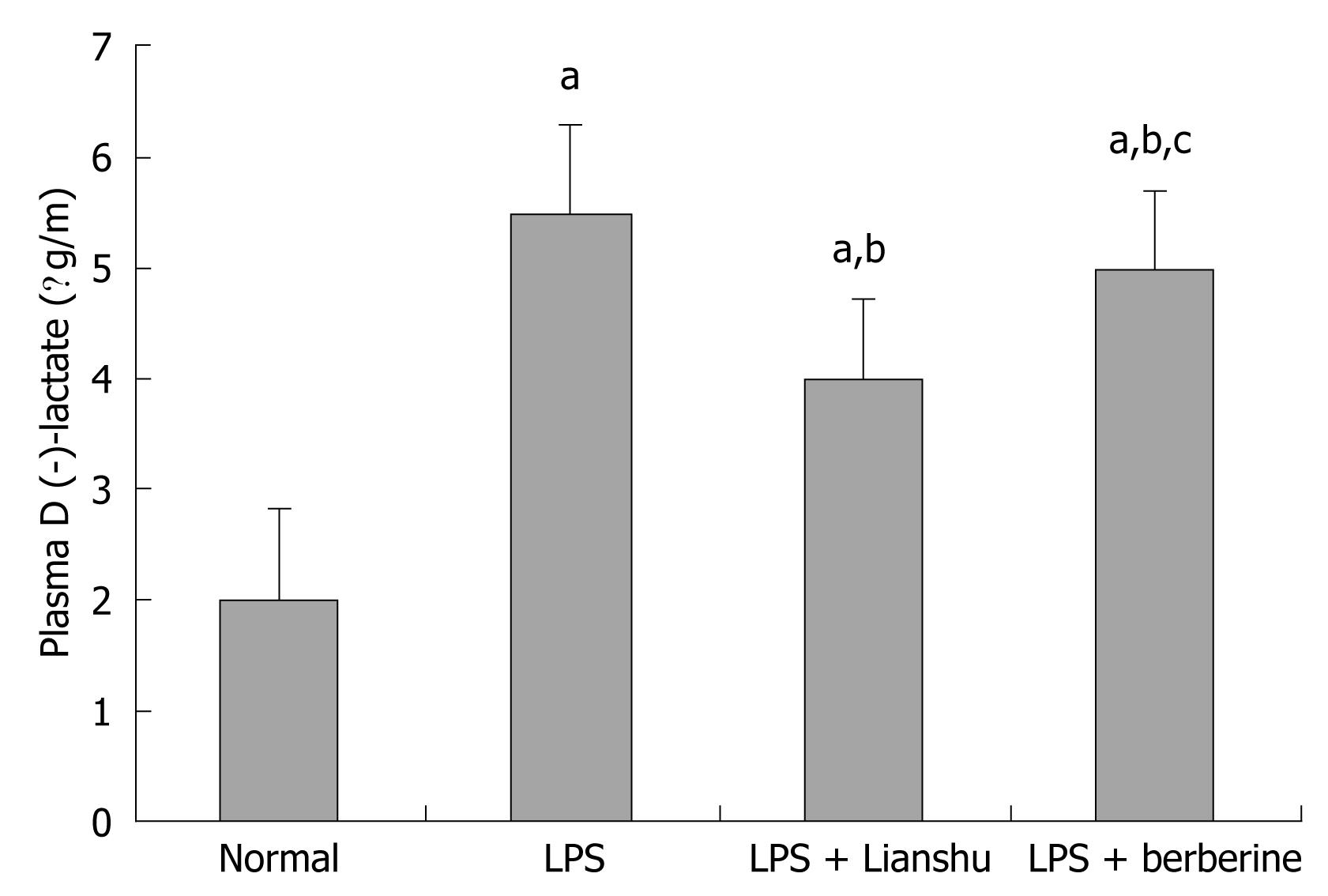 The villi of intestinal mucosa maintained their integrity and the shape of epithelial cells remained unchanged in the normal group. The villi were destroyed in the LPS group. Intestinal mucosal atrophy and inflammatory reaction were detectable in the other groups (Figure 4). 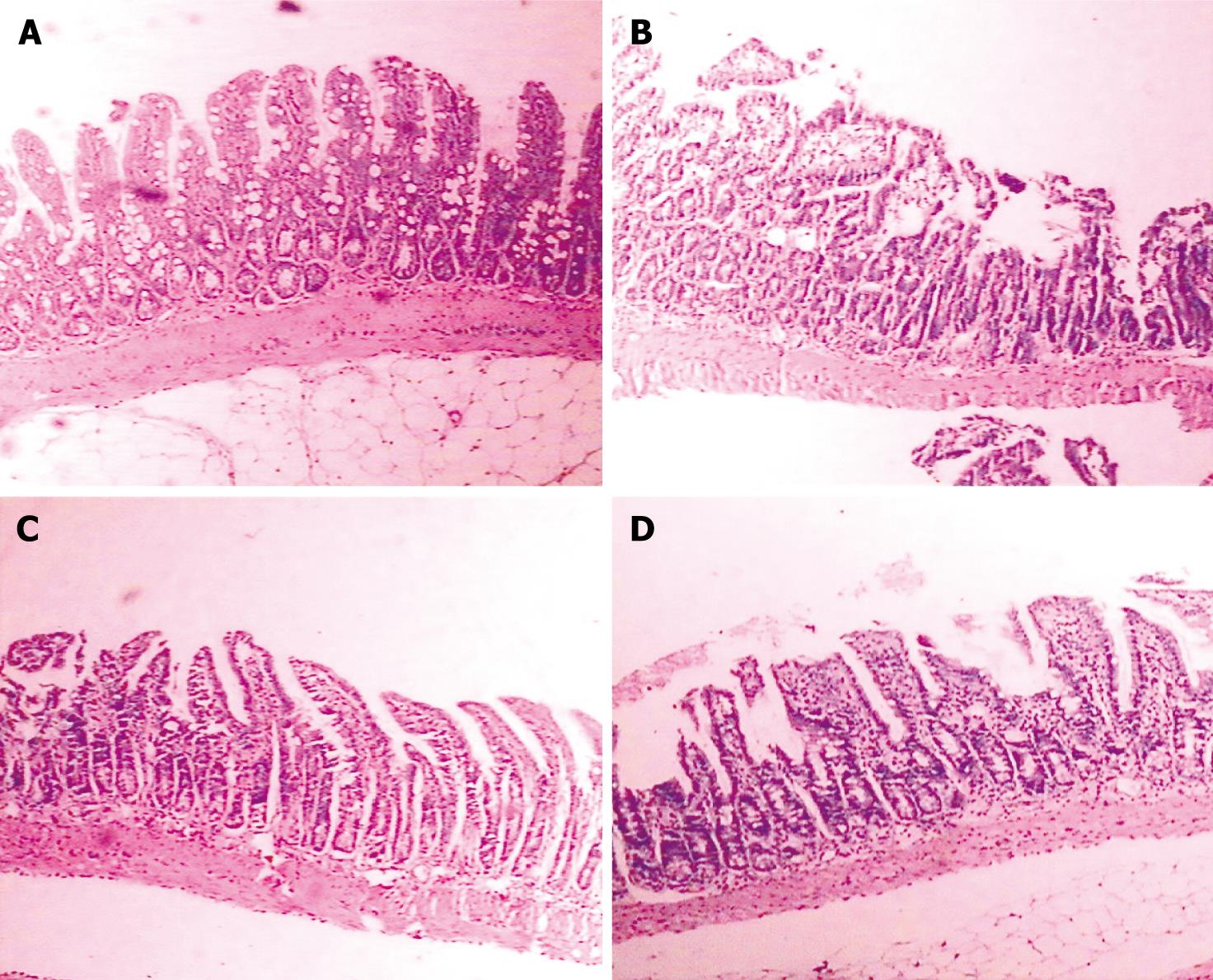 IgA+ cells, round or elliptical in shape, were distributed in the intestinal villi, lamina propria and intestinal glands. The endochylema was stained brown (Figure 5). 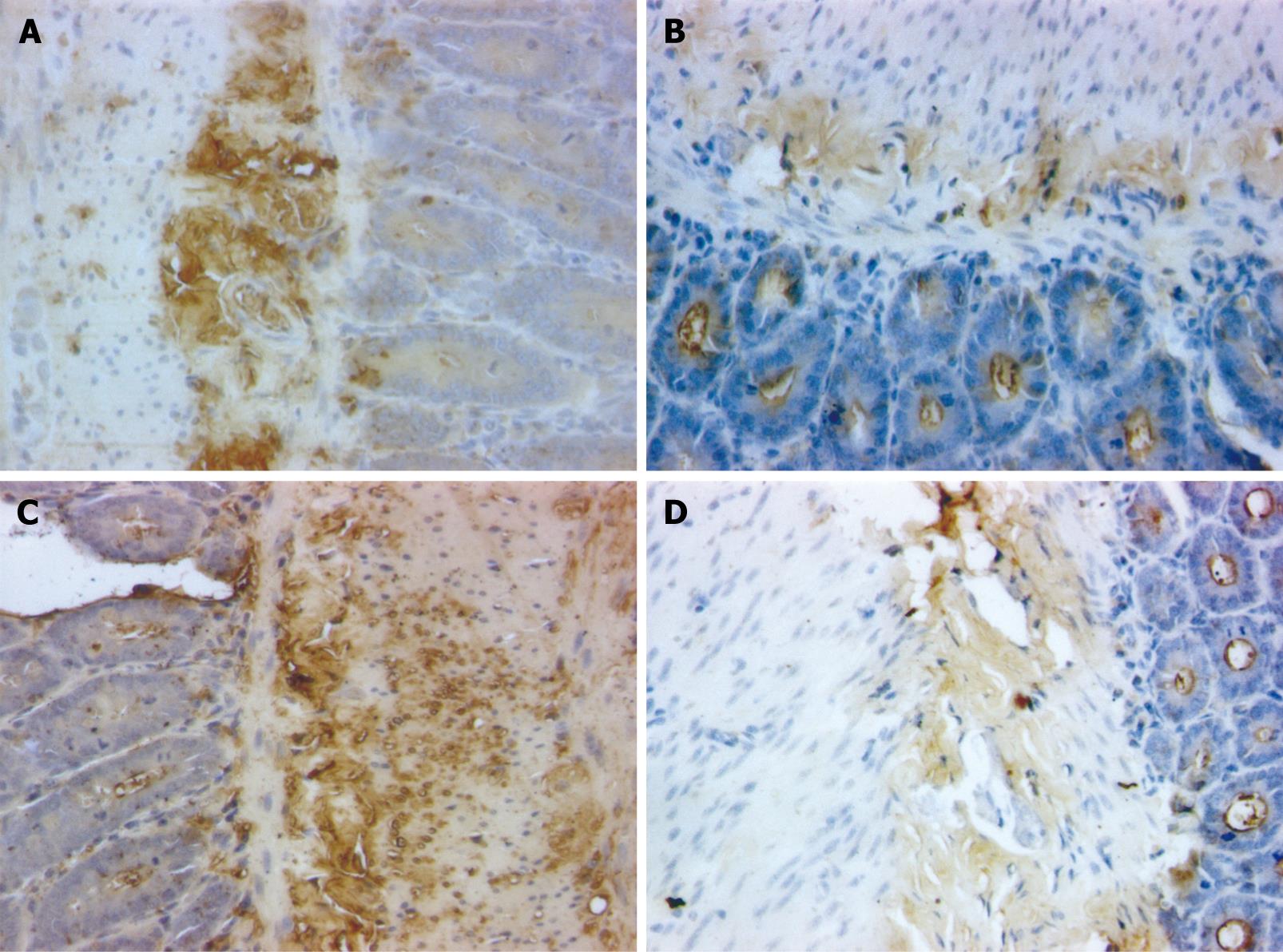 Counteractive effect of Lianshu preparation on yeast-induced pyrexia in rats

Counteractive effect of neostigmine on enterokinesia in mice 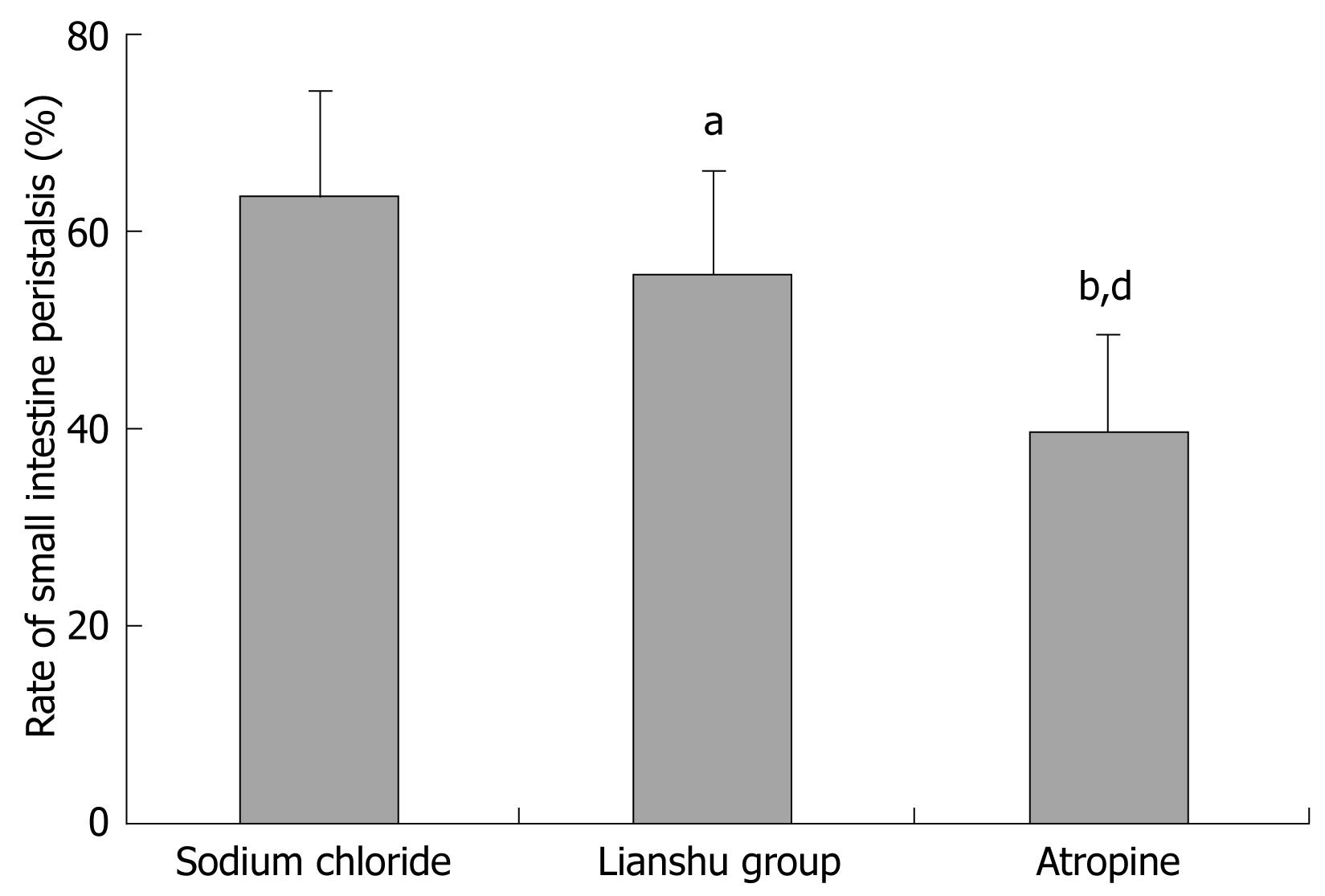 A group of Japanese workers reported that parenteral LPS can lead to proliferation of gastrointestinal luminal bacteria in mice[4]. Subsequent work established that this enhancement of bacterial growth is secondary to fluid exudation, since the growth of bacteria could be suppressed by enteral unabsorbable antibiotics like neomycin[5]. Subcutaneous LPS from Gram-negative bacteria induces intestinal diarrhea characterized by destruction of the intestinal mucosa barricade[6–9].

IgA is the main immunoglobulin in the mucosal immune system[23]. Polymeric IgA antibodies produced by plasma cells in the lamina propria of the intestinal tract bind to polymeric immunoglobulin receptors at the base of the epithelium. The complex of IgA and polymeric immunoglobulin receptors undergoes endocytosis and vesicular transport to the apical surface of enterocytes, and is secreted into the lumen. Generally, plasma cells are derived from B cells. It was reported that B cells are able to switch from IgM expression to IgA expression by Th2 cytokine activity in Peyer’s patches of the lamina propria and mesenteric lymph nodes, and then return to lamina propria of the intestinal tract via systemic circulation[24–26]. LPS, a mouse B-cell mitogen, induces B cell multiplication[26] and differentiation into plasma cells. LPS also activates macrophages to promote the production of cytokines such as interleukin (IL)-1, IL-6 and nitric oxide, which might regulate immunoglobulin production. Therefore IgA inhibits diarrhea caused by viruses[27–29]. Moreover, LPS might activate IgA production in the intestine[30]. However, in our study, the number of IgA+ cells and SIgA in the intestinal fluid was less in the LPS group than in normal group, and greater in the LPS + Lianshu group than in the LPS group, suggesting that high dose LPS leads to severe destruction of intestinal mucosa.

Infectious diarrhea is often caused by Gram-negative bacteria such as Escherichia coli. These organisms contain lipopolysaccharide (LPS). It is the important task of modern medicines to control infectious diarrhea. Antibiotics developed in the 1940s have saved millions of people’s lives. However, because of the widespread and inappropriate use of antibiotics, some bacterial strains become antibiotic-resistant. Folk herbal drugs have been studied for the treatment of acute diarrhea.

The method to treat diarrhea is mainly to kill bacteria or viruses. Lianshu preparation could destroy bacteria, prevent diarrhea, and protect the intestinal mucosa.

Lianshu preparation, comprised of non-antibiotic botanic components, has been used in the treatment of infectious diarrhea with a satisfactory effect. Lianshu preparation could effectively prevent diarrhea, relieve electrolyte disturbances and protect immune barriers. Its effect is better than berberine. In addition, Lianshu preparation has counteractive effects on pyrexia.

Lianshu preparation can be used as a natural medicine in treatment of infectious diarrhea with pyrexia. Chinese herbal drugs are effective against both chronic and acute diseases.

The authors confirmed, in their study, that Lianshu preparation was effective against LPS-induced diarrhea, its effect was better than berberine, suggesting that it can be used as a natural medicine in treatment of infectious diarrhea.