Sclerosing cholangitis from the above-mentioned etiology is sometimes difficult to differentiate from PSC. PSC patients in Japan have a higher incidence of eosinophilia, a less frequent association with inflammatory bowel disease, and a relatively frequent association with chronic pancreatitis, compared with those in Western countries[78]. Establishment of the concept of IgG4-related sclerosing cholangitis accompanying autoimmune pancreatitis has resulted in solutions for the different clinical characters of PSC between Western countries and Japan, except for the higher incidence of eosinophilia in Japan[910].

A 46-year-old Japanese man with jaundice was admitted to our hospital. Ten months earlier, he had developed liver dysfunction with jaundice, which improved by conservative therapy. He had repeated episodes of urticaria from the age of 40 years. Physical examination disclosed no abnormalities except for scleral icterus and mild tenderness in the right upper quadrant of the abdomen. Liver function test results at admission were as follows: aspartate aminotransferase (AST), 37 U/L; alanine aminotransferase (ALT), 36 U/L; alkaline phosphatase (ALP), 695 U/L; γ-glutamyl transferase (GGT), 179 U/L; total bilirubin, 12.3 mg/mL. Total white blood cell count was 3900, with a differential cell count of 59% neutrophils (normal range, 40%-69%), 3% eosinophils (1%-8%), and 31% lymphocytes (21%-49%). Hepatitis virus screening was negative and no tumor markers were elevated. Computed tomography (CT) revealed dilatation of both the intrahepatic and extrahepatic bile ducts. Diffuse thickening of the extrahepatic bile duct wall and thickening of the gallbladder wall were identified on CT (Figure 1). Endoscopic retrograde cholangiography (ERC) showed an obstruction of the lower bile duct (Figure 2). Endoscopic naso-biliary drainage was performed. Upper gastrointestinal endoscopy showed no abnormal findings other than atrophic gastritis. Pylorus-preserving pancreatoduodenectomy and wedge liver biopsy were performed under the diagnosis of lower bile duct carcinoma. After the operation, minor leakage of pancreatojejunostomy developed, and conservative treatment was successful. The patient is alive without any symptoms 6 years and 6 mo after the operation at the time of writing. 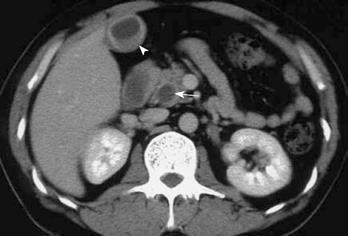 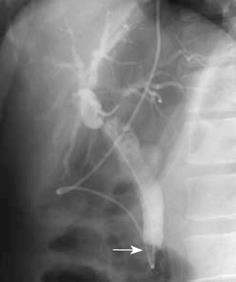 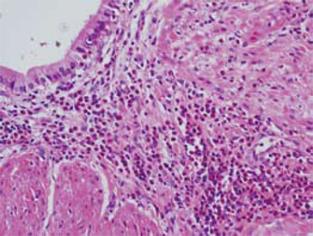 Experimental studies have demonstrated the close relationship between eosinophilic infiltration and fibrosis. It is considered that eosinophils play an important role in the fibrotic conditions of different etiopathology, including endomyocardial fibrosis, scleroderma and scleroderma like-conditions, idiopathic pulmonary and retroperitoneal fibrosis, asbestos-induced lung fibrosis, wound repair, and tissue remodeling[1516]. It has been demonstrated that transforming growth factor-β, a cytokine known for its ability to promote fibrosis, is produced by human eosinophils from patients with blood eosinophilia[1617]. Ten months before admission, our case had developed liver dysfunction with jaundice, which was diagnosed by observation only. This means that eosinophilic cholangitis might have existed 10 mo earlier. This led to speculation that the etiology of our sclerosing cholangitis case was consequent fibrosis from previous eosinophilic infiltration in the bile duct wall. In this regard, bile duct thickening in patients with eosinophilic cholangitis might correspond to fibrosis.