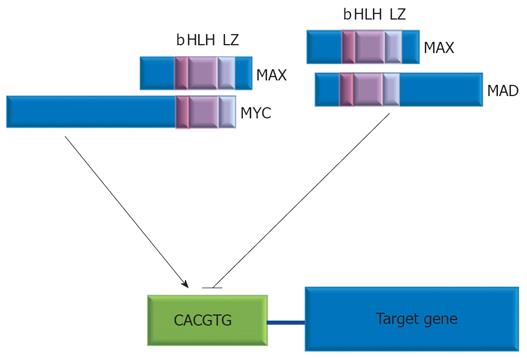 Figure 1 Activation of MYC target genes by the interaction between MYC:MAX or their repression by MAX:MAD. Domains that are common to each protein and are involved in heterodimerization are shown; b: Basic region; HLH: Helix-loop-helix; LZ: Leucine zipper. E-box sequence is shown in green.

A temporal decline in gastric cancer (GC) incidence has been seen in several countries, including Brazil[1,2]. However, this cancer causes nearly one million deaths a year worldwide and is still a serious public health cancer[3], especially in the Pará State, Northern Brazil, where mortality rates are higher than the national average rate[2]. GC is usually diagnosed at advanced stages and the single curative therapy available requires surgical resection[4].

The identification of peculiar genetic characteristics of gastric tumors may help predict prognosis of GC patients and allow more accurate therapeutic approaches. Genetic analyses of GC suggest that there occur structural and functional alterations of several oncogenes and tumor suppressor genes, as well as genetic instability[8]. Additionally, GC has been an interesting carcinogenesis model. Evidence suggests that intestinal- and diffuse-type gastric carcinomas develop through distinct genetic pathways due to different genetic alterations identified in these histological types[9,10].

MYC (C-MYC) oncogene has been described as a key element of several carcinogenesis processes in humans[11]. In the present review, we focus on the deregulation of the MYC oncogene in gastric carcinogenesis.

MYC gene was found to be the cellular homolog of retroviral v-myc oncogene about 30 years ago[12-14]. It is located on chromosomal region 8q24.1, has 3 exons[15,16] and encodes a nuclear phosphoprotein[17].

MYC has to heteromerize with MAX, a protein expressed constitutively, to acquire DNA-binding activity. MYC/MAX dimmers are made viable by a basic region helix-loop-helix leucine-zipper motif (bHLH-Zip), conserved sequences in the carboxyl terminus of both proteins. MYC/MAX dimmers bind to E-box sequence CACGTG in the promoters of specific target genes and stimulate their transcription[18].

MYC has an effect on up to about 15% of genes in genomes of many organisms, from flies to humans[19]. Groups of genes involved in cell cycle regulation, metabolism, ribosome biogenesis, protein synthesis, and mitochondrial function are over-represented in the Myc target gene network.

MYC also consistently represses genes involved in cell growth arrest and cell adhesion[20]. Dominguez-Sola et al[21] recently showed that Myc interacts with the pre-replicative complex and localizes to early sites of DNA synthesis. Thus, it also has a direct role in the control of DNA replication.

Protein products of MYC target genes go on to mediate the downstream effects of MYC on cell biology. MYC is then rapidly degraded, and the pathway switches to a transcriptionally repressive state when MAX dimerizes with a group of related bHLH-Zip proteins, the MAD family, that act as MYC antagonists[27] (Figure 1).

MYC is generally recognized as an important regulator of proliferation, growth, differentiation and apoptosis[29,30]. Therefore, it is also accepted that the deregulation of MYC expression is a major event in cancer pathogenesis or progression. Deregulated expression of a wild-type MYC protein is sufficient to lead to cellular transformation in vitro and tumorigenesis in vivo[31].

Recent studies have also found that MYC oncoprotein, in addition to its directly transforming role, can mediate genomic instability via the induction of reactive oxygen species and by promoting whole chromosome instability leading to tetraploidy and aneuploidy. MYC’s ability to promote chromosomal instability is closely linked to its function as a transcriptional regulator[32]. Our research group reported higher frequency of tetraploid clones in GC cell line[33] and aneuploid cells in primary gastric tumor[34,35].

Oncogenic alterations of MYC are commonly induced by events such as point mutations, gene amplification, chromosomal translocation, viral insertion at the MYC locus, and resistance of MYC protein to ubiquitin-mediated proteolysis and enhanced transcription or translation by other oncogenic signaling pathways[30].

MYC overexpression has been described in over 40% of GC[36]. We found that MYC protein was expressed in all cases of both intestinal- and diffuse-type gastric adenocarcinoma samples of individuals from Northern Brazil[37]. Table 1[38-59] shows the proportion of cases with MYC aberration in several GC studies.

Several studies have shown the association between MYC expression and histopathologic characteristics. Xu et al[51] and Yang et al[54] described a significantly higher expression of MYC in intestinal-type than in diffuse-type GC.

MYC overexpression has also been seen in early GC when tumor invasion is confined to the mucosa or submucosa regardless of the presence of lymph node metastasis[40,41,45,46,52,54,59]. Yang et al[54] found a significantly higher expression of MYC in advanced GC than in early stage GC. However, Onoda et al[41] reported that MYC expression was found to be more frequent and stronger in early than in advanced lesions. Other studies have not found this same difference.

Several studies demonstrated an increased MYC expression in pre-cancerous gastric lesions and its increased expression also has been associated with Helicobacter pylori (H pylori) infection. H pylori is defined as a carcinogen factor to gastric carcinoma infection by the International Agency for Research on Cancer (IARC)[60]. Chronic gastritis caused by H pylori infection may progress to intestinal metaplasia and even to GC[61,62].

Tatsuta et al[63] evaluated MYC mRNA expression by in situ hybridization in 31 elevated gastric lesions. Patients who had borderline lesions with and without MYC overexpression were followed up with repeated endoscopic examinations and gastric biopsies. The authors reported that well-differentiated elevated-type adenocarcinomas were detected in 46% of patients with elevated lesions that presented MYC overexpression during a follow-up period of about 15 mo (range, 2-32 mo) and that no cancers were found in patients with elevated lesions without MYC overexpression. These sample groups were significantly different. Therefore, MYC overexpression may provide a valuable tool for distinguishing between adenomas and well-differentiated elevated-type adenocarcinomas.

Several studies have shown that patients with preneoplastic and neoplastic gastric epithelial lesions are more likely to be infected by cagA positive strains. H pylori cagA is one of the most virulent strains of H pylori. Increased cancer risk is described in individuals infected by cagA-positive H pylori strains compared with those infected by cagA-negative H pylori strains and, in general, in those living in areas with a high rate of cagA-positive H pylori strains[64]. Yang et al[54] compared MYC expression in gastric tissues (intestinal metaplasia, dysplasia and GC) with and without H pylori cagA. These authors found that MYC expression was significantly higher in those lesions of type III intestinal metaplasia and dysplasia II-III with cagA than in those without cagA. Nardone et al[64] also suggested that the increased prevalence of MYC expression was in agreement with the high prevalence of cagA positivity seen in the population studied.

Some studies have showed an association between MYC amplification and GC[42-44,48]. We have also previously seen MYC amplification in intestinal adenocarcinoma by dual-color fluorescence in situ hybridization (FISH), such as homogeneously staining chromosomal regions and double minutes, supporting our CGH results[56]. Our findings support that these two histological GC types follow different genetic pathways.

Our research group also found that all five early GC cases with MYC overexpression also had three signal to MYC gene by FISH assay, varying between 13% and 26% of cells/case[59]. Suzuki et al[43] found MYC amplification in all 6 early GC cases studied, varying between 19% and 89% of cells/case, and this rate was not significantly difference from that found in advanced GC samples. These findings suggest that MYC amplification can be a critical event to gastric carcinogenesis.

Epigenetic events play a significant role in cancer development and progression. DNA methylation is the most studied epigenetic alteration. Some studies also have demonstrated that MYC hypomethylation, which leads to its activation, is significantly more common in GC samples than non-cancerous tissues[75,76]. Fang et al[77] and Weng et al[78] suggest that folate level reduction is associated with upregulation of MYC expression and its promoter hypomethylation in GC.

Proto-oncogenes have a major role not only in cancer development, but also in cancer therapies[79]. MYC alteration is seen in the early gastric carcinogenesis progress. The detection of MYC locus amplification may be used as an auxiliary tool to GC diagnosis and as a predictor of GC aggressiveness.

MYC also could be used as a therapeutical target. Several experimental studies showed that MYC inactivation suppresses tumors in animal models, suggesting MYC as a molecular target in cancer treatment[80-83].