A 35-year-old man was admitted due to bloody stool and anemia. The bleeding source could not be detected by esophagogastroduodenoscopy or colonoscopy. Double balloon endoscopy (DBE) revealed a diverticulum-like hole in which coagula stuck in the ileum at 1 meter on the oral side from the ileocecal valve. The adjacent mucosa just to the oral side of the hole was elevated like a submucosal tumor. The lesion was considered the source of bleeding and removed surgically. It was determined to be a cyst with an ileal structure on the mesenteric aspect accompanying gastric mucosa. The diagnosis was a duplication cyst of the ileum, which is a rare entity that can cause gastrointestinal bleeding. In the present case, DBE was used to find the hemorrhagic duplication cyst in the ileum.

Double-balloon endoscope (DBE) is a new endoscopic device designed to examine the small intestine. Observation of the entire small intestine can be achieved through a combination of anal and oral approaches. Endoscopic interventions such as mucosal biopsy, clipping, argon plasma and polypectomy can also be performed. We often encounter patients with obscure gastrointestinal bleeding in which bleeding cause cannot be revealed by the usual methods of esophagogastroduodenoscopy (EGD) and colonoscopy. DBE is thus used to find the origin of small intestinal bleeding. Here we report a case in which the origin of the patient’s gastrointestinal bleeding was found with DBE and diagnosed as a duplication cyst of the ileum after surgery.

A 35-year-old man was admitted to a hospital with the complaint of right lower abdominal pain in April, 2003. Appendicitis was suspected and appendectomy was performed. However, he continued to suffer from occasional abdominal discomfort and symptoms of subileus. Early in August, bloody stools appeared. Iron deficiency anemia (hemoglobin level, 8.1 g/dL) was also noted. Although EGD, colonoscopy and radiological enteroclysis were performed, the origin of the gastrointestinal bleeding remained unknown.

At the end of August 2003, the right lower abdomen pain appeared again after a meal. Inflammatory reactions were also elevated. Thus, he was referred to our hospital for further examination. Physical examination showed local peritonitis. Abdominal CT displayed ascites in the circumference of the liver and thickness of the distal small intestine wall in the pelvis. With appropriate medical treatment and antibiotic therapy, his condition and the inflammatory reaction improved. Colonoscopy and radiological enteroclysis failed to ascertain any lesions responsible for the symptoms. The patient was thus discharged from hospital.

His condition was good until bloody stool suddenly appeared again in July, 2005. He was admitted to our hospital the next day. Anemia gradually progressed. Scintigraphy for hemorrhage revealed a deposit in the ileum end. Colonoscopy, however, failed to detect the source of the bleeding. The patient was then referred to Kyushu University Hospital. DBE performed using a perianal approach revealed coagula adhered to the ileal wall about 1 m on the oral side from the ileocecal valve (Figure 1A). When the coagula were removed, a bleeding diverticulum-like hole appeared and the adjacent mucosa just on the oral side of the hole was elevated like a submucosal tumor (Figure 1B). We injected hypertonic saline with epinephrine and also injected India ink near it as a marker. However, intermittent bleeding continued after the procedure. The patient, therefore, underwent an urgent operation. When the inside of the abdominal cavity was observed, a cyst was found on the mesenteric side of the ileum, about 1mm proximal to the ileocecal valve, and connected to the ileocecal valve by an adhesion band. The lesion was considered the bleeding source and thus resected. Histological examination revealed that the cyst was located on the mesenteric aspect and had an ileal structure with gastric mucosa (Figures 2 and 3). A diagnosis of duplication cyst of the ileum was thus made. The patient was discharged from hospital 10 d after surgery and has remained symptom-free since then. 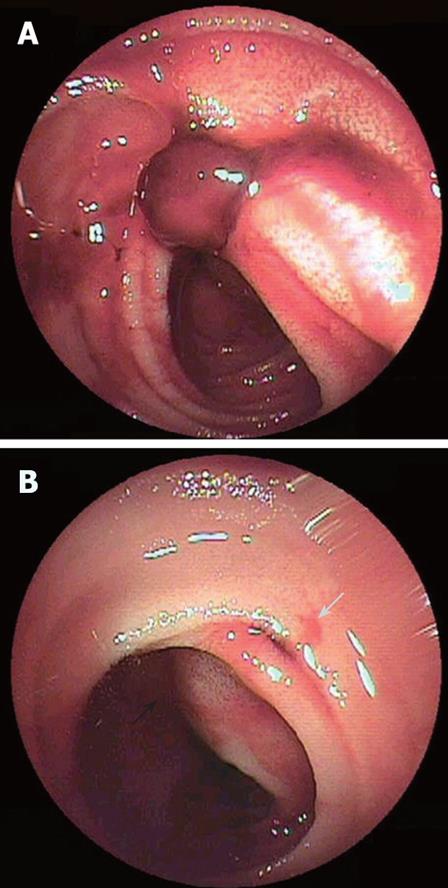 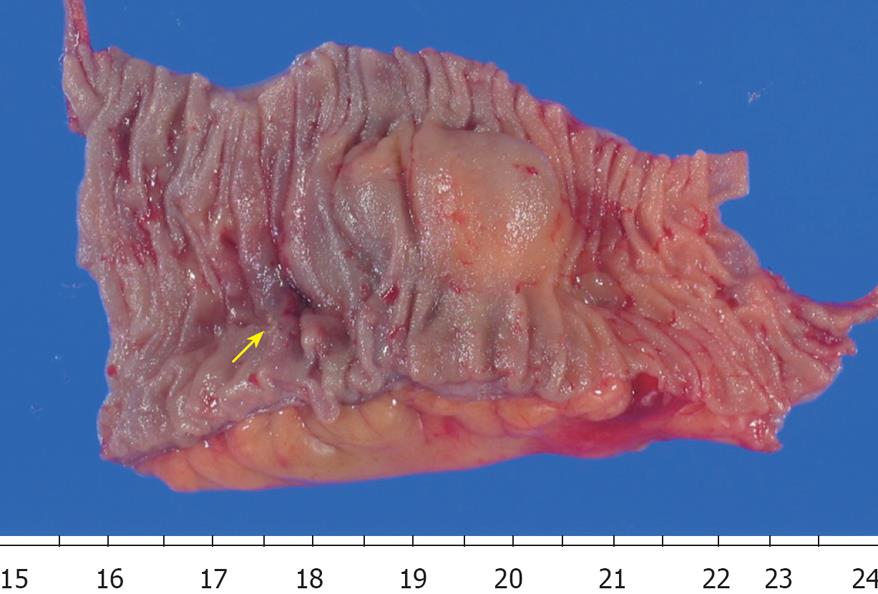 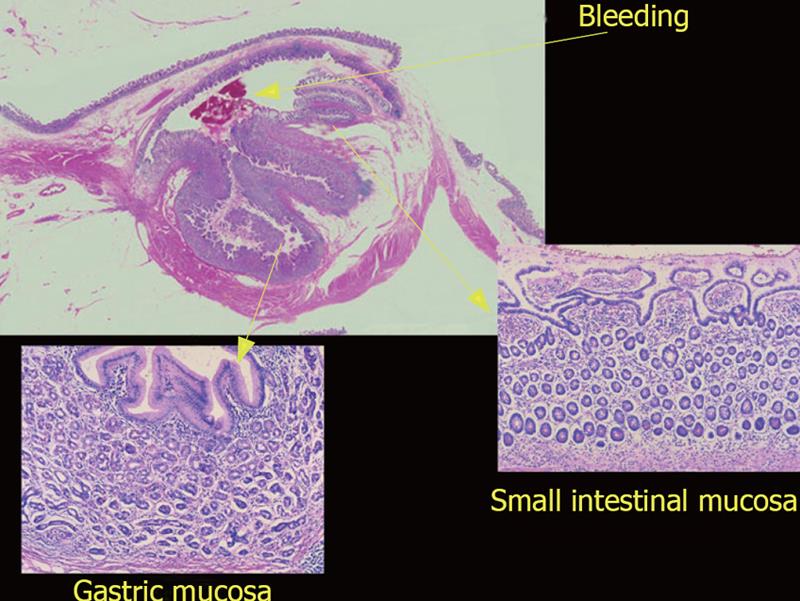 Figure 3 HE staining for the resected tissue showing an ileal structure with gastric mucosa and bleeding in the cyst.
DISCUSSION

Duplication cysts are congenital malformations that can arise throughout the alimentary tract from the oral cavity to the anus. The majority are diagnosed in infancy and childhood. Duplication cysts of the small intestine constitute about 60% of those in alimentary tract and are located on the mesenteric aspect, in contrast to a Mekel’s diverticulum that localizes on the antimesenteric aspect. Duplication cysts are classified into spherical and tubular types. The former is more commonly found in the small intestine[1]. The present case was considered a spherical one.

Hoshi et al[2] reported that 34% of duplication cyst patients complain of stomachache, 24% vomiting, 17% an abdomen mass and 10.5% bloody stool. In our case, because of the right lower abdominal pain, appendectomy was performed 2 years ago. After the operation, the various symptoms continued. Though these symptoms seemed to be due to a duplication cyst, the relevant diagnosis was not made until 2 years later.

Previously, it was relatively difficult to diagnose a small intestinal lesion. However, diagnostic strategy changes with the availability of DBE[4] and wireless capsule endoscopy (CE). In fact, Toth et al[5] reported that they could find a tubular type duplication cyst of the small intestine by CE, suggesting that CE can reveal circumferentially ulcerated stenosis in the ileum. There is no report on an image of a spherical type of duplication cyst in the small intestine detected by endoscopy. Here, for the first time, we showed an image of a spherical type of duplication cyst obtained by DBE. The cyst was too small to be detected by other modalities such as CT, US and radiological enteroclysis.

Duplication cysts are rare in adults and there are few reports on a diagnosis made before operation. Thus ascertaining the existence of such a lesion is difficult. We presented a case of a duplication cyst of the small intestine found by DBE. We expect that duplication cysts may be more frequently found with the future spread of DBE and CE.