CONCLUSION: Anatomic lymph node distribution, sandwich sign and specific enhancement patterns of lymphadenopathy in SBM on CT images can be used in differentiating between tuberculosis and untreated NHL involving SBM.

No evidence of HIV infection was found in the 22 patients (including 10 men and 12 women at the age ranging from 20 to 74 years, mean 49 years) with newly diagnosed and previously untreated NH. The diagnosis was made by histologic examination of biopsy specimens of enlarged lymph nodes. Involvement of the left major psoas muscle in 2 patients and the adrenal gland in 1 patient was observed. Three patients had splenomegaly.

All patients giving their written informed consent were examined with a spiral CT scanner (Elscint HeliCAT Flash). Before undergoing CT, the patients drank 500 mL of a 1.5% diatrizoate solution. An 80-100 mL bolus of Ultravist (Schering Germany, 300 mgI/mL) at a rate of 2.5-3.0 mL/s was administered through veins. Contiguous axial images (5-8 mm thick) were obtained at 5-8 mm intervals from the dome of diaphragm to the symphysis pubis (120-140 KV, 212-250 Ma, pitch 1-1.5). Sixty seconds after injection of the contrast material, contrast-enhanced CT scan was performed.

Two observers unaware of the final diagnosis independently reviewed each CT image and recorded a number of characteristics of enlarged lymph nodes in SBM, including anatomic location, enhancement patterns and “sandwich sign”. Discrepancies in interpretation between observers were solved by consensus. Small bowel mesenteric lymph nodes were grouped anatomically into the following three sites: the root, margin (area including mesenteric marginal vessels and vasa rectas) and body of SBM (the area between the root and margin of SBM). The short-axis diameter of each node was measured. The CT images of enlarged lymph nodes were compared with those of normal lymph nodes as previously described[12]. The enhancement patterns of enlarged lymph nodes in the 40 patients were described as homogeneous, peripheral, and homogeneously mixed peripheral enhancement. Enhancement was considered peripheral when thick, irregular or thin rim was seen, and homogeneously mixed peripheral when some enlarged nodes showed homogeneous enhancement and other nodes at the same site showed peripheral enhancement. Additionally, we observed the extranodal sites of tuberculosis and NHL, including spleen and abdominal wall. Differences in anatomic distribution, enhancement patterns and presence of “sandwich sign” between the two groups were compared by statistical analysis. Because of the small number of cases, Fisher’s exact test was used to compare tuberculosis with NHL involving SBM.

The anatomic distribution and enhancement pattern findings are listed in Table 1 and the findings of “sandwich sign” are shown in Table 2. 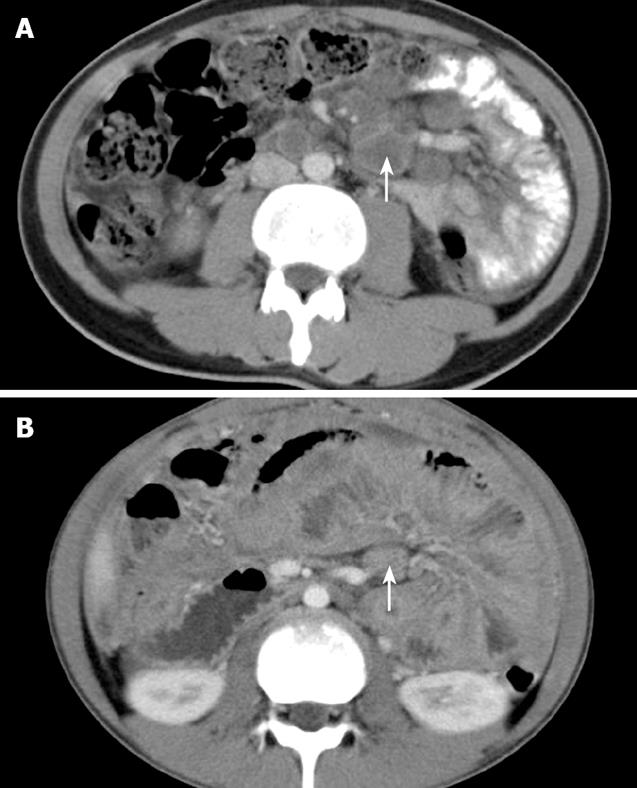 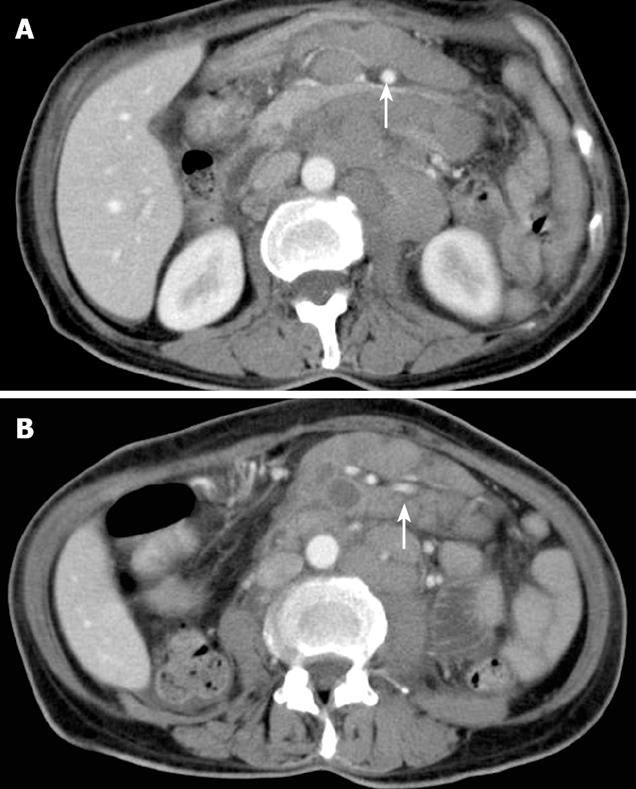 TL is the most common manifestation of abdominal tuberculosis, and tuberculous infection may result in mesenteric lymphadenopathy[1013]. It may be transmitted by three major routes. The first route is ingestion of materials infected with tubercle bacilli which are carried from a lesion in the intestinal submucosal layer to the lymph nodes draining the bowel segment. Drainage is usually from the lymphatics of the ileocecum, jejunum, ileum, and right side of colon to the peripancreatic and superior mesenteric lymph nodes. The second route is hematogenous spread. Bacteria are disseminated from a distant site of infection, usually the lungs, to the abdominal lymphatic system. Because this process is systemic, it may cause infection of mesenteric lymph nodes. The third route is infection spreading directly to the abdominal lymph nodes from the serosa of adjacent infected structures. Literature et al[14] reported that most patients with a past history of TB come from areas with a high prevalence of active tuberculosis and have epigastric pain, fever and weight loss, and enlarged nodules with focal calcification sometimes.

SBM, in a series of fan-like ruffles, suspends the jejunum and ileum to the posterior abdominal wall consisting of two posterior peritoneal layers. It is composed of fatty, extraperitoneal connective tissue, blood vessels, nerves, lymph nodes, and peritoneal investment. The attached border of SBM root extends obliquely from the distal duodenum at the lower border of pancreas on the left side of L2 to the cecum in the right iliac fossa. The line of attachment passes from the duodenojejunal junction over the third portion of the duodenum, then obliquely across the aorta, inferior vena cava, right ureter and psoas major muscle, to the right ilica region[15–17].

The mesenteric lymph nodes can be divided into three subgroups: some lie close to the wall of small intestine, others occur in relation to primary branches of mesenteric vessels, and some consisting of central nodes along the main trunk of the superior mesenteric artery[18].

Pathologic findings from surgical specimens of TL indicated that caseation or liquefactive substances at the center of enlarged lymph nodes had a low attenuation presumably resulting from insufficient blood supply, whereas peripheral inflammatory lymphatic tissue had a higher attenuation on enhanced CT resulting from the preserved blood supply[19].

One limitation of this study is the relatively small number of cases of tuberculosis involving SBM. Enlarged lymph nodes with a peripheral enhancement in SBM can also be seen in metastatic malignancy and other diseases. In general, if primary malignancy is known, most metastatic malignancies are easily diagnosed. Other causes for mesenteric lymphadenopathy that characteristically demonstrates central low attenuation on CT are Whipple disease[25] and cavitating mesenteric lymph node syndrome of celiac disease[2627]. Mesenteric lymphadenopathy has also been reported in patients with familial Mediterranean fever during an acute abdominal attack, Castleman disease and Crohn’s disease[28–31].

The incidence of tuberculosis is increasing. When the prevalence of abdominal tuberculosis is high, it is difficult to establish its diagnosis. Lymphadenopathy is the most common manifestation of abdominal tuberculosis and may be easily confused with lymphoma involving abdominal lymph nodes. Lymphoma is the most common malignant neoplasm affecting mesentery, and Hodgkin’s Lymphoma rarely involves mesentery. We conducted a comparison of CT findings in tuberculosis and non-Hodgkin’s lymphoma (NHL) involving small bowel mesentery (SBM) to improve physicians’ ability to distinguish between these entities.

The incidence of tuberculosis is increasing. Lymphadenopathy is the most common manifestation of abdominal tuberculosis. A comparison of CT findings in tuberculosis and lymphomas of retroperitoneal lymph nodes has been reported.

SBM, in a series of fan-like ruffles, suspends the jejunum and ileum to the posterior abdominal wall consisting of two posterior peritoneal layers. NHL and tuberculous lymphadenopathy may involve SBM, and the correct diagnosis and differential diagnosis are important for their clinical treatment. We compared CT findings in tuberculosis and NHL involving SBM to improve the physicians’ ability to distinguish between these entities.

This study may improve the physicians’ ability to distinguish tuberculosis from NHL involving SBM, and specific CT imaging criteria may be used in the differential diagnosis of other malignant tumors involving SBM.

This study evaluated the specific CT imaging criteria for differentiating tuberculosis involving small bowel mesenteric lymph nodes from lymphomas, showing that distribution of anatomic lymph nodes, sandwich sign and specific enhancement patterns of lymphadenopathy in SBM on CT images can be used in differentiating tuberculosis from NHL involving SBM. The study is well designed and interesting.