A 39-year-old male underwent distal gastrectomy for a high grade gastrointestinal stromal tumor (GIST). Computed tomography (CT) and magnetic resonance imaging (MRI) 107 mo after the operation, revealed a cystic mass (14 cm in diameter) and a solid mass (9 cm in diameter) in the right and left lobes of the liver, respectively. A biopsy specimen of the solid mass showed a liver metastasis of GIST. The patient received imatinib mesylate (IM) treatment, 400 mg/day orally. Following the IM treatment for a period of 35 mo, the patient underwent partial hepatectomy (S4 + S5). The effect of IM on the metastatic lesions was interpreted as pathologic complete response (CR). Pathologically verified cases showing therapeutic efficacy of IM have been rarely reported.

Gastrointestinal stromal tumor (GIST) is the most common soft tissue tumor of the gastrointestinal tract. It was reported that GIST derived from interstitial cells of Cajal is characterized by the expression of CD34 and c-kit (CD117). Immunohistochemical positivity for c-kit gene product-CD117, a tyrosine kinase receptor, reflects the presence of gained function of c-kit gene mutation[1]. Imatinib mesylate (IM) (Glivec; Novartis Pharmaceuticals, Basel, Switzerland) is a small-molecule tyrosine kinase inhibitor that suppresses the mutated c-kit product[2]. Clinical trials[34] for recurrent or metastatic GIST have demonstrated that the partial response (PR) rate is 47% to 54% based on radiographic evaluation. However, a complete response (CR) is rarely reported. Pathologically verified cases showing therapeutic efficacy have been rarely reported. Up to present, only seven cases of locally advanced or metastatic GIST with a pathologic CR to IM treatment have been reported in the literature[5–10].

The initial treatment for a metastatic GIST is to use IM, and then surgical treatment directing toward complete resection is to be considered when the tumor has responded and reduced in size[11–13]. However, neither the adequate intervals between the start of treatment with IM and operation, nor the significance of surgical resection for the patients with metastatic GIST who have been treated with IM, has been completely elucidated.

In this paper, we present a case of GIST with meta-chronous liver metastasis treated with IM, and describe confirmed the therapeutic efficacy of such a molecular targeting drug as IM, which was confirmed by virtue of pathologic CR following complete surgical resection.

A 39-year-old male complaining of epigastralgia was found to have a 3 cm × 2 cm submucosal tumor on the anterior surface of the body along the lesser curvature of the stomach, and underwent partial gastrectomy. Pathological examination of the surgical specimen revealed a high grade leiomyosarcoma showing spindle cells with 20 mitoses/10HPF and 17% in the MIB-1 index. The patient was subsequently diagnosed as having an uncommitted type of high grade GIST, since he was immunohistochemically positive for CD34 and CD117 (Figure 1). One hundred and seven months after the initial operation, the patient developed right upper quadrant pain during exercise. Physical examination revealed marked hepatomegaly and the lower margin of the liver could be palpated at five-finger widths below the costal margin. Computed tomography (CT) and magnetic resonance imaging (MRI) showed a cystic mass (14 cm in diameter) and a solid mass (9 cm in diameter) in the right and left lobes of the liver, respectively (Figure 2). Open biopsy was attempted and specimens were obtained from the solid tumor mass in the left lobe of the liver. Pathologically, spindle cells were positive for CD34 and CD117 with 15 mitoses/10 HPF and 15% in the MIB-1 index, which was indicative of a metastatic GIST of the liver (Figure 3). Only fluid was obtained from the cystic mass in the right lobe. A drainage tube was inserted into the cystic mass through the abdominal wall. Cytological examination of the fluid showed that the cystic mass was Class II. Since the cystic and solid tumors in the liver were considered too huge to be resected entirely and curatively, molecular targeting therapy using a daily dose of 400 mg of IM was started 3 mo after the liver biopsy. The drainage tube inserted into the cystic mass was removed after a three-week treatment with IM. A follow-up abdominal CT, one month after the start of IM treatment, showed apparent reduction in size of both the cystic and solid masses. The reduction of the solid mass in the left lobe was a partial response (PR). MRI, 30 mo after the treatment with IM, showed that the contrast-enhanced wall of the solid mass became thinner and central necrosis increased in size (Figure 4A). Although CT, 34 mo after the treatment, showed a 5 cm ring-enhanced mass in the left lobe (S4) and a 6 cm enhanced mass in the right lobe (S5) of the liver, the total volume of the neoplastic masses in the liver was sufficiently reduced after the curative resection of the masses (Figure 4B). The IM treatment was interrupted after 35 mo, and then the patient underwent partial hepatectomy (S4 + S5). The cut-surface of the resected specimens from S5 and S4 showed a homogenous yellow-white hard mass and a necrotic soft mass, respectively, forming a scrollwork structure, containing hemorrhagic foci, and surrounded by a yellow-white hard layer (Figure 5). Pathologically, most of the specimens were replaced with hyaline-degenerated tissue, adjacent to which, cystic-degenerated tissue and necrotic tissue with hemorrhage and macrophages containing hemosider-in granules stained with Berlin blue were observed. Since no viable tumor cells stained with CD34 or CD117 were observed in any of the whole sections at the maximum cut surface of the resected specimen, the effect of the IM treatment on the metastatic GIST was interpreted as the pathologic CR (Figure 6).

Figure 1 Histological study showing spindle cells with mitoses (HE, × 200) (A) and immunohistochemistry findings revealing positive staining for CD117 (B) and CD34 (× 200) (C) in primary GIST of the stomach. 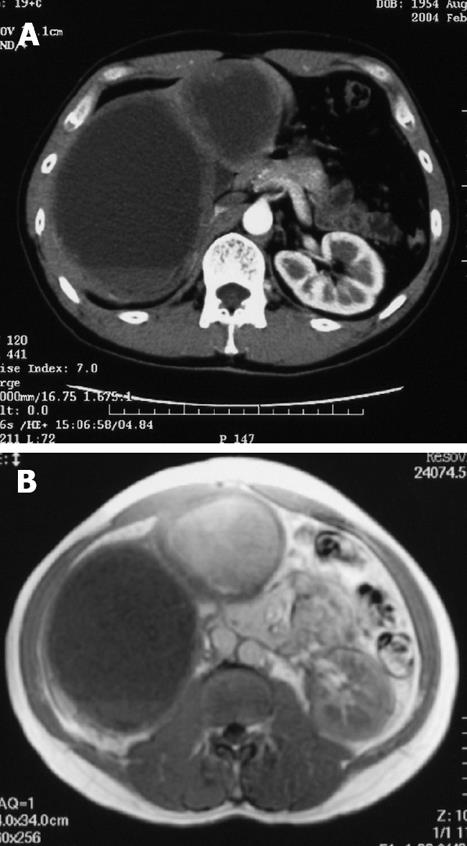 Figure 2 Contrast-enhanced CT scan (A) and MRI (B) on T1-weighted image 107 mo after the initial operation. 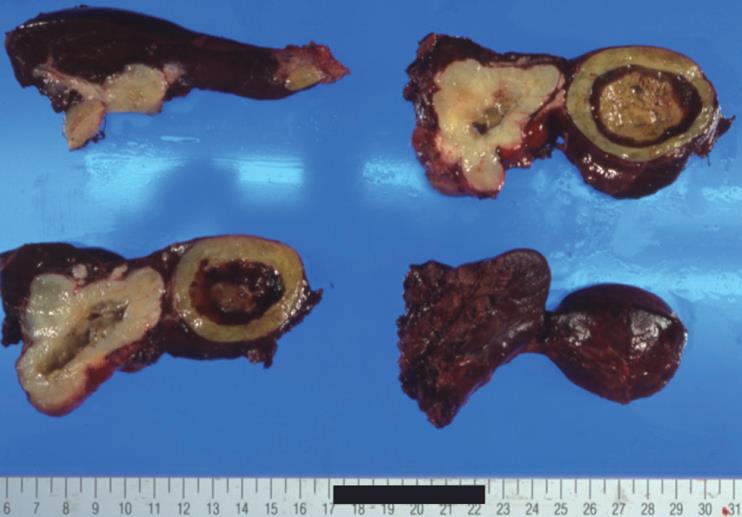 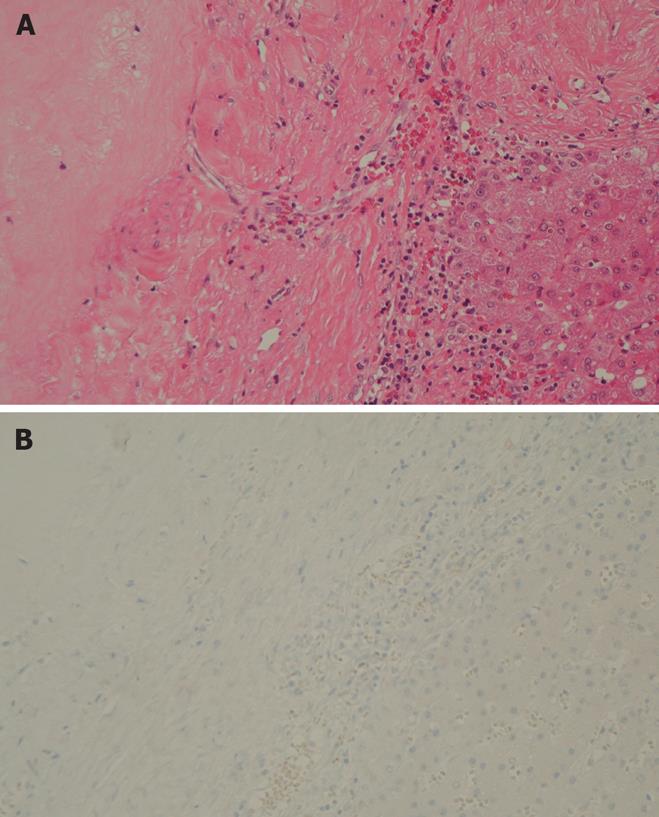 Figure 6 Histological study showing no viable tumor cells and hyaline degenerative tissues (HE, × 200) (A) and immunohistochemistry findings revealing negative staining for CD117 (× 200) (B) in the resected specimen after treatment with Imatinib.

One week after the operation, oral administration of 400 mg IM daily for 12 mo was performed. Fourteen months after the partial hepatectomy at the time of writing this paper, no recurrent lesion was observed on CT and MRI examinations.

As far as we know, only six clinical reports on the pathological effect of IM treatment on locally advanced or metastatic GIST have been published[569101618]. According to Gronchi et al[18], no case with a pathologi-cal CR was obtained in a series of 38 patients, although the degree of pathologic changes varied widely. Furthermore, Andtbacka et al[10] pointed out that radiographic and metabolic CR based upon 18F-fluorodeoxyglucose positron emission tomography (FDG-PET) are not always concordant with a pathologic CR; therefore, it should be born in mind that the pathological evaluation on the surgically resected materials obtained from patients treated with IM might be indispensable for the elucidation of the therapeutic effect of IM on GIST. They also emphasized that the changes in the degree as well as the extent of contrast-enhancement, and the internal structure within the solid tumor should be carefully evaluated on CT and MRI[10]. According to their categorization, our case presented in this paper is compatible with ‘initial regression then stabilization’ on CT and MRI. MRI, five months prior to the operation in our case, disclosed thickening of the enhanced wall and a change of the signal intensity of the internal structure of the mass in the left lobe of the liver. In fact, the changes in internal density reflected the central necrosis on the cut-surface of the resected mass. Histopathologic changes induced by IM in GIST have been reported to be hyaline degeneration, myxoid degeneration, and appearance of scattered inflammatory cells, hemosider in granules and foamy cells, but seldom necrosis[35–8]. Bauer et al[6] who found no necrosis in a series of twelve patients treated with IM, speculated that IM would mainly induce apoptosis, but not so much necrosis. As for the timing of surgical resection in patients with recurrent or metastatic GIST, Andtbacka et al[10] have reported a complete resection rate of 31.4% after IM therapy for a period of 6.9-37.5 mo (mean, 10 mo). They also emphasized that surgical resection for the IM-responsive recurrent or metastatic GIST should be considered as early as possible before the development of progression and secondary resistance to IM[10]. Surgical resection, 6-12 mo after the start of IM treatment, is recommended among responders[9]. Although the time of operation in our case was markedly delayed (35 mo) in comparison with the time suggested by other investigators, it is thought to be adequate for avoidance of the secondary resistance to IM treatment.

In summary, we report a case of GIST with meta-chronous liver metastases who underwent complete surgical resection following IM treatment. The resected specimen was pathologically proven as a CR. Preoperative radiographic CT, MRI, findings and microscopic findings of the resected specimen were described from the view point of the effect of the molecular targeting therapy.